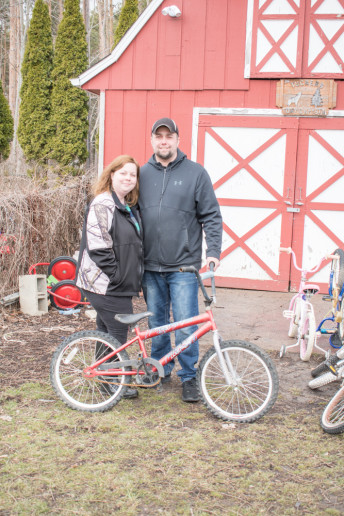 Located on Fenton Road, on Flint’s south side, is Krystal Jo’s Diner – a little place well known for its down-home atmosphere, juicy burgers and fresh-cut fries. Owner Tony Tucker named the place after his wife, Krystal Jo. Celebrating its 10th anniversary this year, the little diner has become a community hangout where everybody knows everybody.

Ever since he was a little boy, Tony has fixed bikes and sold them to make a little spending money. About five years ago, he found a girl’s bicycle at a garage sale and purchased it for a dollar. He thought he would fix it, take it to the diner and give it to one of his customers.

“Anyone know a little girl who wants a bike?” Tony asked. “And they all wanted it!” he exclaimed. On his way home from work that day, he started thinking about that and called his wife to tell her, “I have an idea.” He wanted to do a bike giveaway and involve all of Krystal Jo’s staff. The first year, they rounded up and repaired about 27 bikes. “We had a barbecue in the diner parking lot,” Tony remembers. It was a huge success and brought the whole community together. “Let’s do it again next year!” he told everyone.

Krystal Jo’s bicycle giveaway took off like wildfire and continued to grow. “People just started showing up at the restaurant and giving us bikes,” Tony says. He never imagined that little barbecue would turn into the event that it is today. It outgrew the diner parking lot and was relocated to an elementary school parking lot. Last year, 577 kids were given a bike, and this year, the goal is to give away 1,000. They also have some supporters, now. “The Johnny Burke Children’s Foundation is our biggest contributor,” Tony says. In March, 711 Entertainment hosted a fundraiser at local music venue, The Machine Shop. For concert admission, attendees had to bring a bicycle or bicycle helmet. The Machine Shop donated 100 bikes for the event.

This year, the giveaway will be held at Neithercut Elementary School and Holmes STEM Academy, on Flint’s north side. The day is filled with fun and everything is free! There will be food, a backpack program, games and live entertainment. The bikes are given to kids ages three to 16 years. “It’s just a big, cool event!” Tony exclaims. “Anyone can attend. All kids are treated equally and the bikes are raffled,” he adds.

Another great aspect of the bike giveaway, according to Tony, is that the kids have an opportunity to spend some time with local heroes. Personnel from the City of Flint and Flint Township Police Departments, Genesee County Sheriffs, and the Lapeer Armory will be on hand to help. The volunteers not only help the kids pick out their bikes, but also help them make adjustments to the seats and just spend a few moments with the kids. 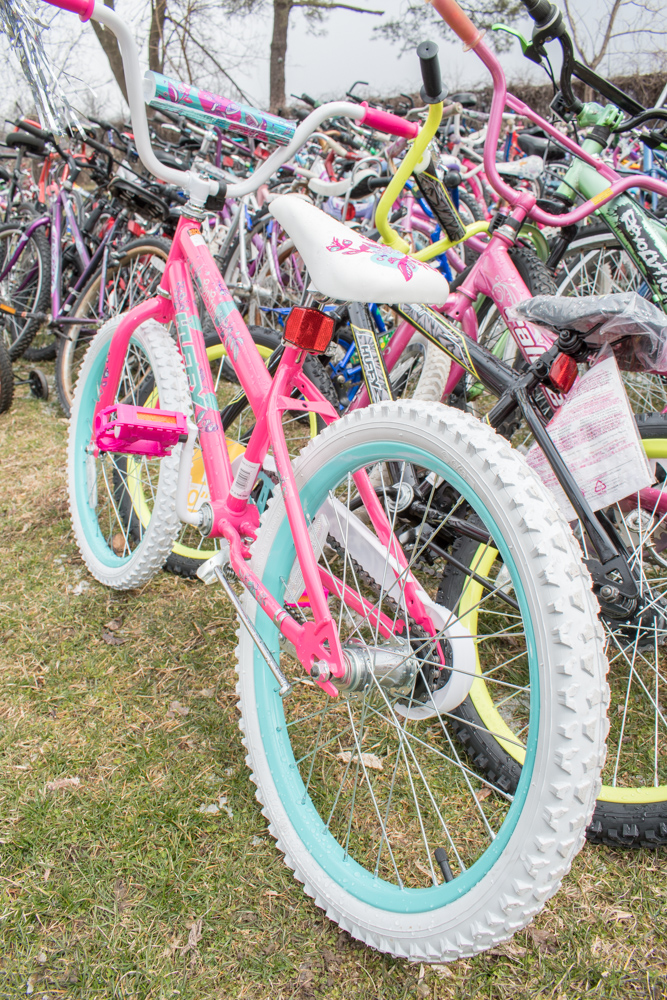 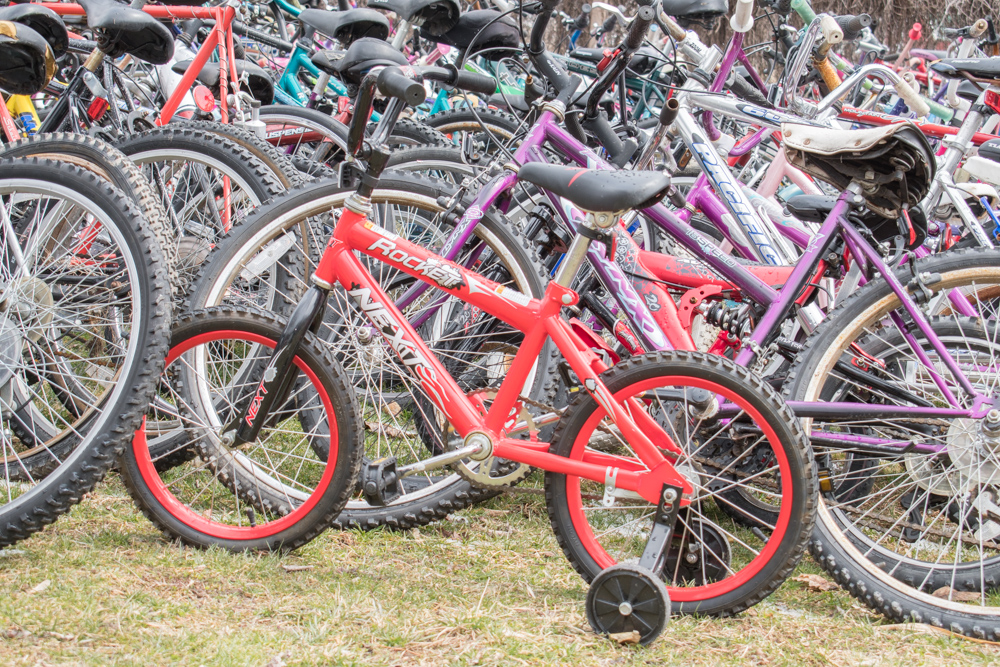 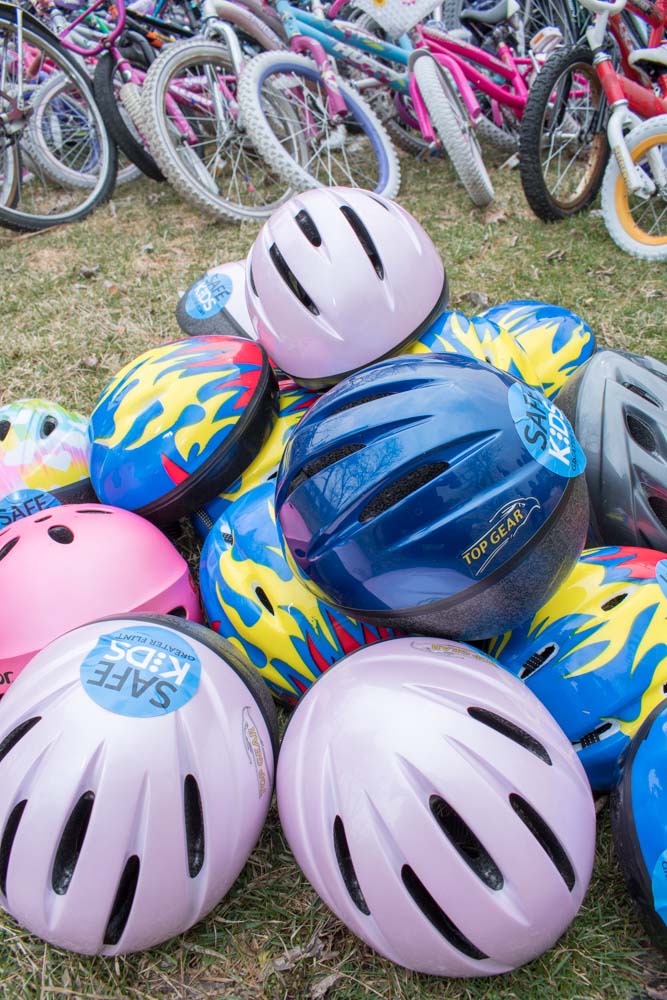 Many other volunteers help make the giveaway a huge success. “Last year, about 80 people showed up just to help. It’s awesome,” Tony adds. “It’s a real community event. You can’t be there without wanting to be involved.”

Currently, Tony has hundreds of donated bikes stored at his home. “I’m the bike mechanic,” he laughs. “Every bike goes through my hands before we give them away. I approve every single one.” He says he is very lucky to have an understanding neighbor.

Tony credits the community for the success of the annual giveaway. “The only reason it is so successful is because the community is so involved,” he admits. “A lot of people have helped make it what it is today.” He gives special thanks to Rawlan Lillard, Community School Director at Neithercut Elementary. “He is an event organizer who took us from a parking lot barbecue to a very well-planned event.” Tony’s number one supporter, however, is Krystal Jo. “I couldn’t do it without her. I don’t know of anyone who would support the mess I brought home.”

Krystal Jo’s Diner is still accepting monetary donations for the June 9 giveaway and bikes can be dropped off at the restaurant. “It’s all about the kids,” Tony says. “It’s all for the kids.”