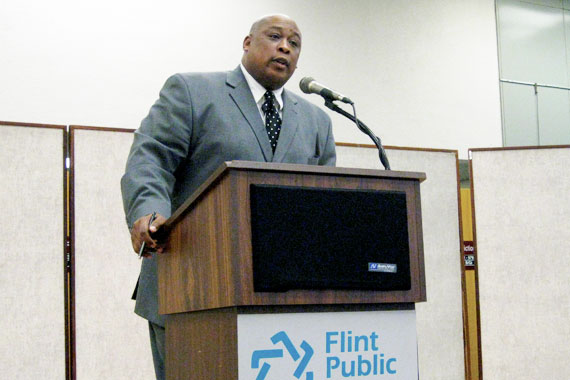 Accomplished author and veteran Flint Police officer Brian Willingham is a man committed to service. The Flint native devoted seven years to the United States Army; he saw the fall of the Berlin Wall while stationed in Germany at the end of the Cold War. Now in his 15th year with the Flint Police Department, he will soon serve as a minister at Bethel United Methodist Church of Flint. So worthy of recognition is Officer Willingham’s dedication to the betterment of his community that the Friends of the Flint Public Library invited him to highlight his endeavors in a keynote address at their annual event on April 9.

In his speech, Officer Willingham recounted stories from his childhood, such as fond memories of listening to the music of Motown and stories of his great-grandmother’s life. He cites these remembrances as the inspiration for his life-long “love for words.” This love that began in his childhood would later foster an “affinity for black literature” in Brian’s teen and adult years that included the works of James Baldwin and Claude Brown.

In 2003, Brian added his name to the index of noteworthy black authors when he published his first book, Thunder Enlightening, which features his original poems and photography. His second book, Soul of a Black Cop, which highlights compelling events he experienced as a police officer, was published in 2004. Soul of a Black Cop has been very well received by the literary world. It was endorsed by Leon Litwack, a Pulitzer Prize winning author and professor of American History at the University of California, Berkley and earned Brian an Independent Publisher Book Award, as well as the President’s Volunteer Service Award. It has also become required reading in local college and university courses. During his speech, Officer Willingham read two stories from Soul of a Black Cop, treating the audience to authentic and heartwarming local prose.

I was fortunate to chat with Officer Willingham after his speech. I was humbled by his unpretentious welcome: he invited me sit alongside him while he signed copies of the book for several of the more than 100 people in attendance. Brian’s wife and the oldest of his three children were quick to introduce themselves to me. I witnessed the spirit of service in their family as his daughter brought us refreshments while her twin brother corralled the youth group he mentors through the Boys & Girls Clubs of Greater Flint. I could tell that community service is a way of life for this family of five. After witnessing this family dynamic, I turned to Officer Willingham as he signed the last book and asked what he was passionate about in Flint.

“I want to see Flint really revitalize the community and the neighborhood,” he answered, mentioning how vital the church can be in effecting positive change in the black community. “Particularly in the urban areas, we’re losing schools and a sense of community. What I would really like to see is something like a Catholic parochial school: a system that includes religious education.”

Brian said that his statements regarding his vision for his community are rooted in who he is as a church member and soon-to-be minister: “As I grow in the ministry, I want to see a church that would not only nourish people’s spiritual development, but also address the educational and economic components – a place where it could all be attended to under one umbrella.” My soul was quieted at that moment, as I could relate to everything he said by virtue of being from a poor, Flint family. I related even further as a Christian who would like to see the Black Church embrace the same type of holistic approach to community.

As I thanked him for assisting in the community’s revitalization efforts by joining the chorus of black authors with Soul of a Black Cop, Officer Willingham remained humble. “Far be it from me to put myself among the ranks of distinguished authors, but maybe one day, somebody might see it in that light,” he replied. He also has a memoire in the works, which will include details of his upbringing, his time spent overseas serving in the Armed Forces, and additional events from his career as a police officer. “I made mistakes and went through some stuff, but I got a second chance,” he said, regarding the memoire. “As a black person in law enforcement from this community, my experiences will possibly help those who are still going through it.”

Our interview ended just as the library was closing for the day. I stood to my feet and grabbed the empty plastic dishes which had held our refreshments, in order to dispose of them, and in doing so, I was aware of the way that being around people who serve inspires one with a desire to do the same. I am thankful to have met Officer Brian Willingham: he is one of Flint’s many success stories, and his example is worth following. My dream is to serve my city in like fashion.