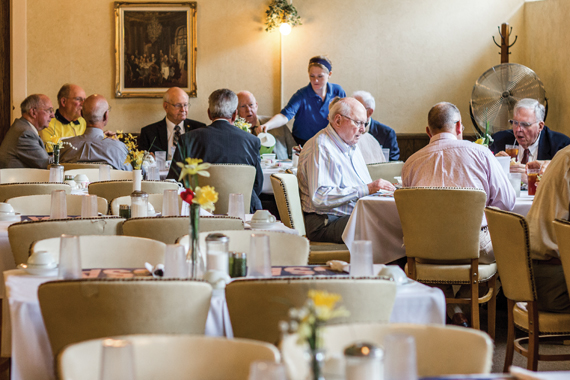 It’s lunchtime and your stomach is growling. All you want is a simple and affordable home-cooked meal. And that is exactly what you will find at Battiste’s Temple Dining Room, one of Downtown Flint’s oldest restaurants. Battiste’s is a family-owned establishment currently managed by the third generation of the Battiste Family. William C. Battiste opened it in 1947 and passed it down to his son, Robert, who entrusted it to the capable hands of his son, Larry, in the mid-70s. Lawrence Battiste cooks food that makes you miss your mom.

Located in the lower level of the Masonic Temple building at the corner of S. Saginaw and Fourth Streets, the dining room is large, with tables covered in crisp white linen. The room takes you back to a former time: dark paneling and table lamps exude authenticity without stuffiness, and the air has the comfortable smell of good cooking. Although perhaps best known for fried chicken dinners with all the fixings, the menu includes a variety of tempting homemade meals to suit any appetite. “Customers particularly love our pasties,” said Carol. Pasties à la Battiste are delicacies with a light, flaky crust and rutabagas in the filling. “Everything served here is homemade,” added Larry.

“They have the best hot beef sandwich,” said Bill Wilson, who has been eating lunch at Battiste’s since 1984. He believes the secret is in the gravy, which is rumored to contain a dash of wine, giving it its signature robust flavor. For those of you who believe that when it comes to gravy, more is always better, you’ll be delighted to learn that the sandwich is served with a heaping mound of gravy-smothered whipped potatoes. Another patron said it’s Carol’s crispy, pan-fried chicken livers that he craves come lunchtime. Other popular menu items include lightly breaded Gulf shrimp, a broiled cod fillet, ham with a grilled pineapple ring, the Temple Taco Salad, and a grilled pork chop served with applesauce.

Of course, you can’t talk about Battiste’s without mentioning dessert. “The crepes are wonderful,” Carol recommended, mentioning how the Bavarian crème and raspberry sauce make this confection a favorite. The cream puffs are also very popular. Larry bakes all the pies, and a slice is just $2.50, offered in tempting varieties such as apple, blueberry cherry, custard, peach, pumpkin, walnut, and rhubarb. “It’s the best deal in town,” said one patron, pointing out that the meals are very reasonably priced. A hot beef sandwich is a mere $4.95, and $5.67 will get you a ham salad sandwich, peach cobbler and a beverage. Don’t let the prices mislead you: “The quality of the food is great,” boasted Larry, which is proved by Battiste’s large, countywide catering service.

The staff at the Temple Dining Room includes a laundry list of Battiste surnames. Carol, Larry’s wife, manages the staff and has been serving food to hungry guests since the early 70s. Larry’s brother, Robert, is also on staff, assisting him in the kitchen. Their sister, Lynn, worked at the dining room for many years, and still does bookkeeping. Some customers say they come to lunch at Battiste’s just to see the cashier, Ruby, a retired banker in her 80s who greets customers with a smile at a table in the entranceway. “We are so lucky to have her,” Larry said.

During the peak days of Buick, Battiste’s was so popular that at least 250 people would arrive for lunch right at 11 am. “They would be lined up the stairs waiting,” remembers Carol. There is still a strong customer base today, with many regulars who love the food and atmosphere. Carol and Larry both say that what they most enjoy about the restaurant are the people they’ve met throughout the years. “We have the best customers,” Carol smiled. One of their most famous diners was Attorney Geoffrey Fieger, who asked the cook to make him some tomato rice soup. Other beloved regulars include members of the Knights of the Round Table, who are among Carol’s favorite customers from the old days. According to Carol, the group included local attorneys, judges and businessmen who met daily to sit at the dining room’s round table and argue politics over lunch. “I loved those guys to pieces,” she laughed. While many of the group’s members have passed away, the round table remains in the dining room, and is still called the Knight’s Table to this day.

Now, a new group has established Battiste’s as its lunch headquarters. Every Monday from September to May, the Retired Men’s Fellowship of Greater Flint meets at the Sarvis Center to hear a guest speaker, then lunches at Battiste’s Temple Dining Room. The men wear business attire and enjoy the camaraderie of the meetings and the meal afterward. “You won’t meet a finer group of men,” said Louie Barger, General Chairperson and soon-to-be president of the group. Comprised of 130 members, the men of the Fellowship represent all walks of life, from retired school superintendents to former grocery store owners. On May 20, the group filled up one side of the dining room for their last Monday lunch of the year. Unlike the Knights of the Round Table, the Retired Men’s Fellowship discusses everything except politics and religion, according to Louie. But what keeps them coming back every Monday is the delightful, homemade fare. “Everything is just delicious,” he said.

If you’re craving comfort food, come to Battiste’s and become part of the history of this enduring Flint landmark. Note: In the true spirit of its founding era, Battiste’s doesn’t take plastic – so bring your pocket change!

Are you interested in purchasing photos from this story? Go HERE and select the “Masonic Lodge” category.