It was a perfect summer day in August when car enthusiasts revved up their engines and rolled into town to participate in one of Flint’s most anticipated events. My City Magazine met up with three female classic car owners at “Bricks Flicks,” the annual Back to the Bricks kickoff at the nostalgic US 23 Drive-in Theater. Hundreds of car lovers enjoyed the family-friendly festivities, which featured a showing of the 1981 Burt Reynolds road-race comedy,“The Cannonball Run.” 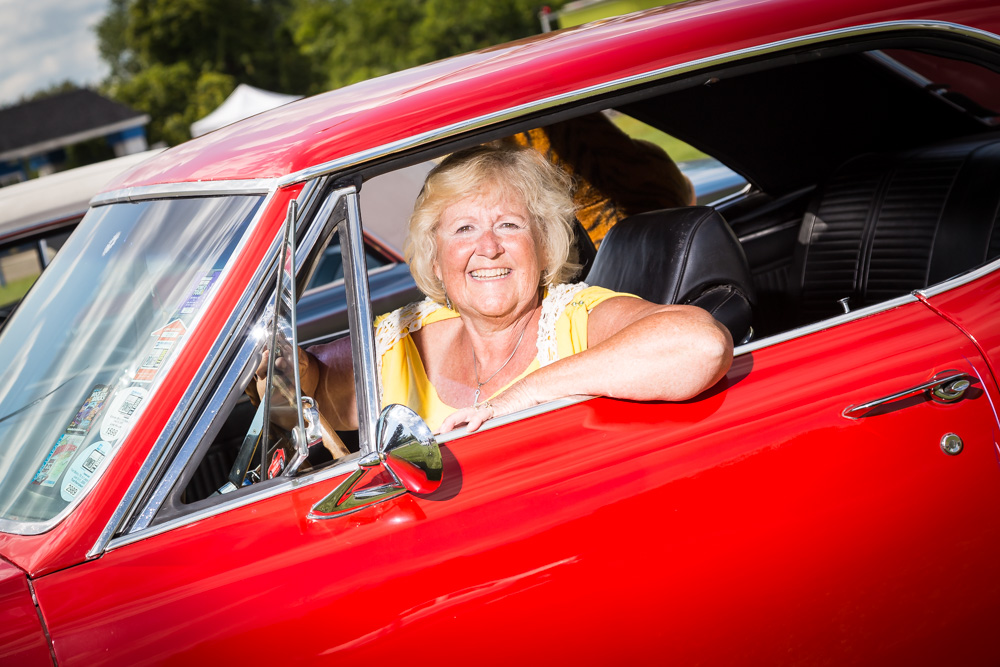 Rhonda Rau was sitting pretty in her flashy, red 1966 Pontiac GTO, and Nancy Sekrenes showed off her baby blue 1962 Buick Skylark, with eyelashes on the headlights. Roberta Vasilow, a past Back to the Bricks event chair, rolled in with her red, four-speed 1968 Buick GS400 Convertible, of which only 351 were made that year. “And I have one of them,” she boasts.

What these gals have in common is that they all love cars and participating in Back to the Bricks. “I come from a family of GM workers,” says Rau, who was born and raised in Flint. “That was our bread and butter, and we learned to love cars.” Back in the day, she used to drag race. “I loved the drag strip. I loved the cars,” she shares, even though she never won a race. “But, it was cool to come home with a number written on the car in white shoe polish.” Rau liked cars so much, she even chose her boyfriends by how “cool” their cars were.

Rau has participated and volunteered for Back to the Bricks since its second year. At first, the cars only occupied a couple of blocks, she remembers, but it has now grown to become one of Flint’s most attended events. She is the chairperson of the Promo Tour, which included 207 cars this year. The group toured five cities to promote awareness of the event. “It was a fantastic time,” she says. 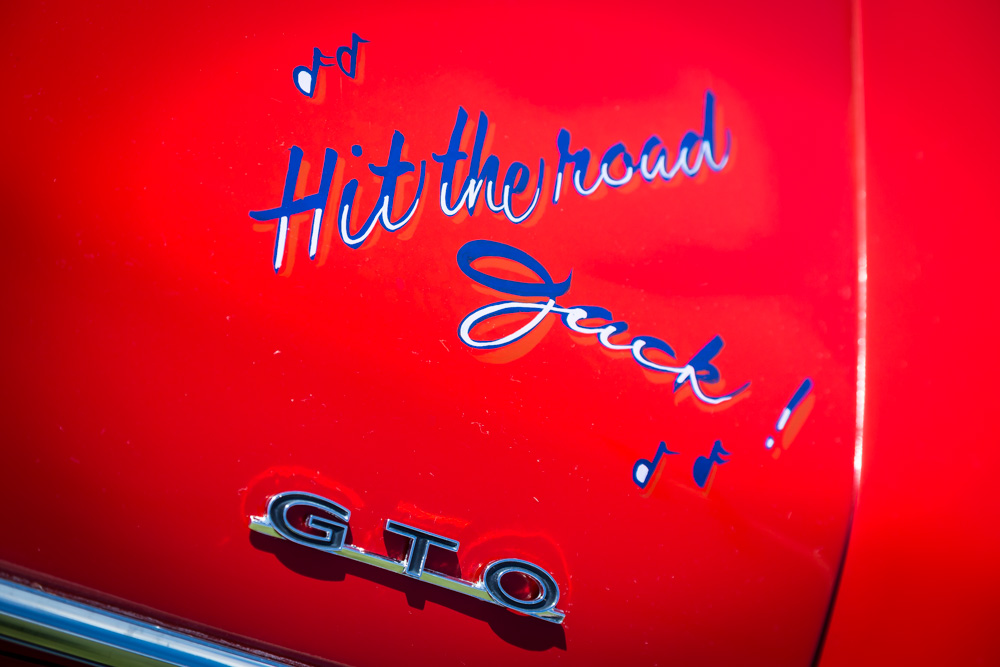 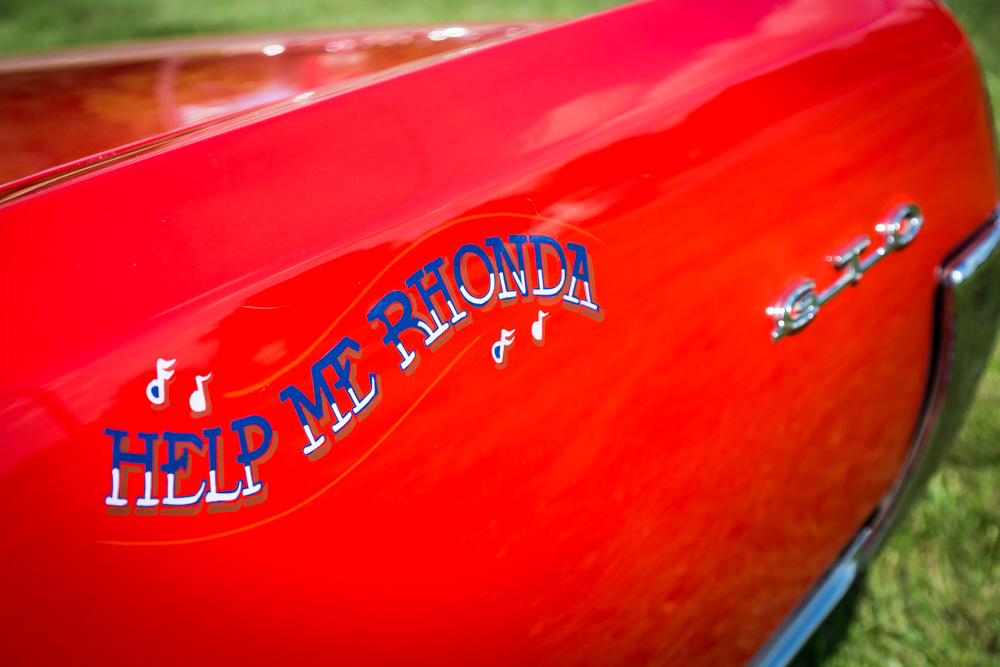 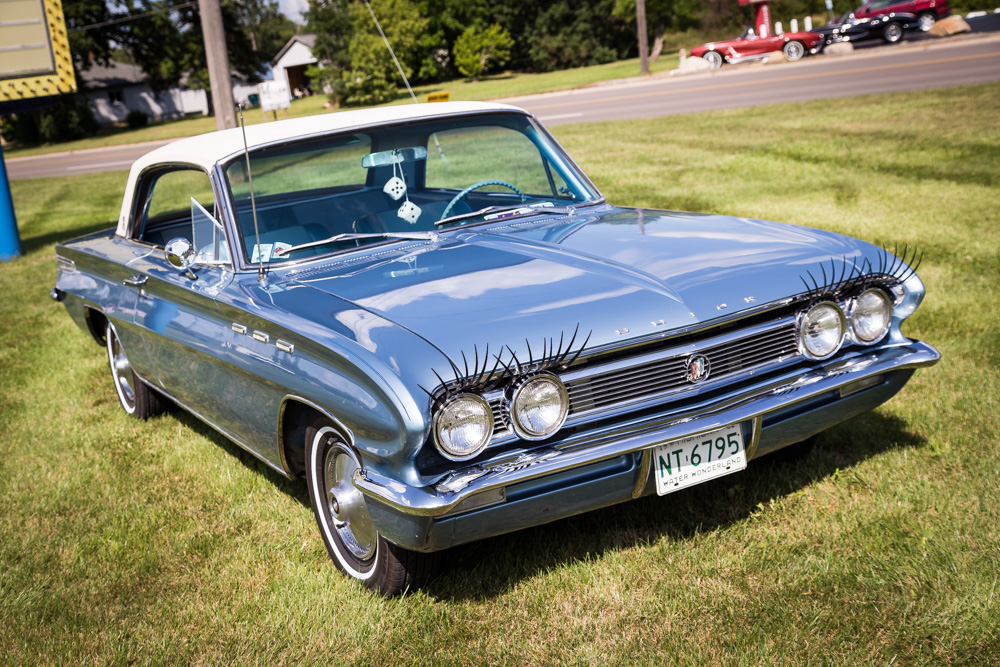 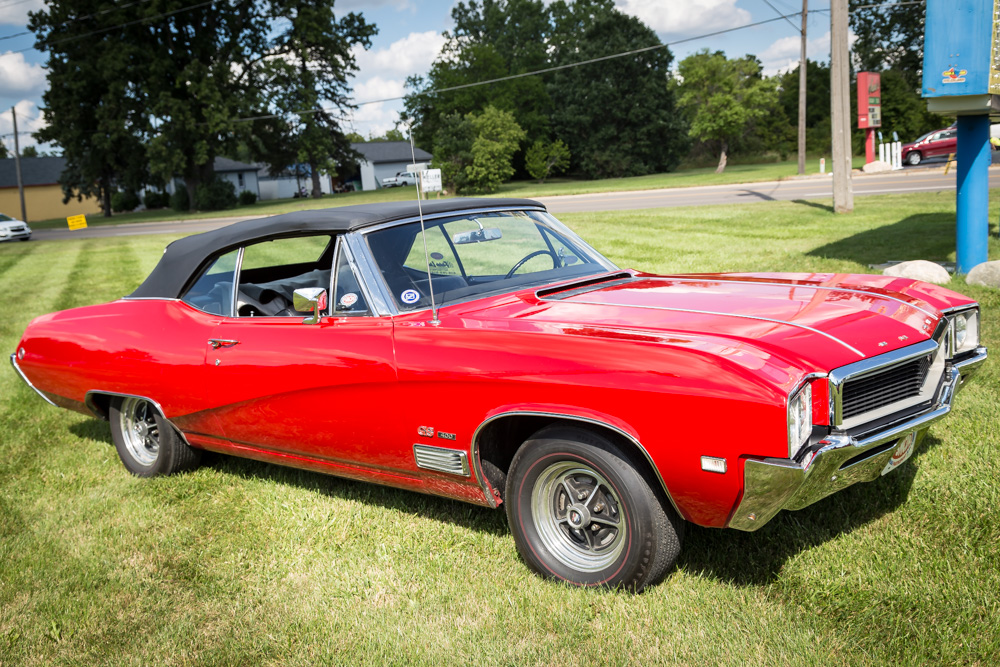 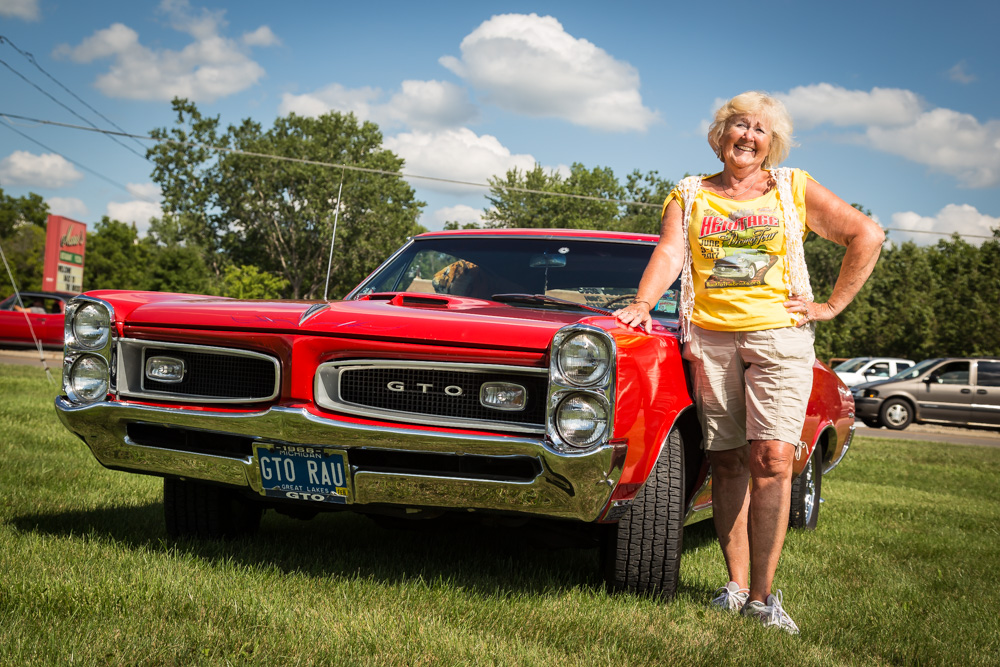 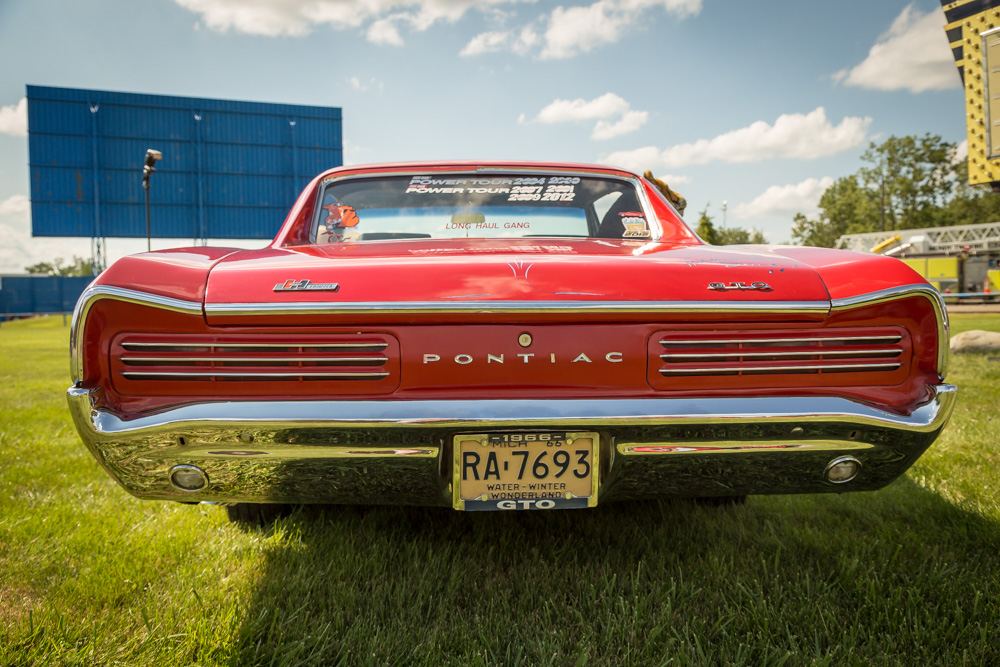 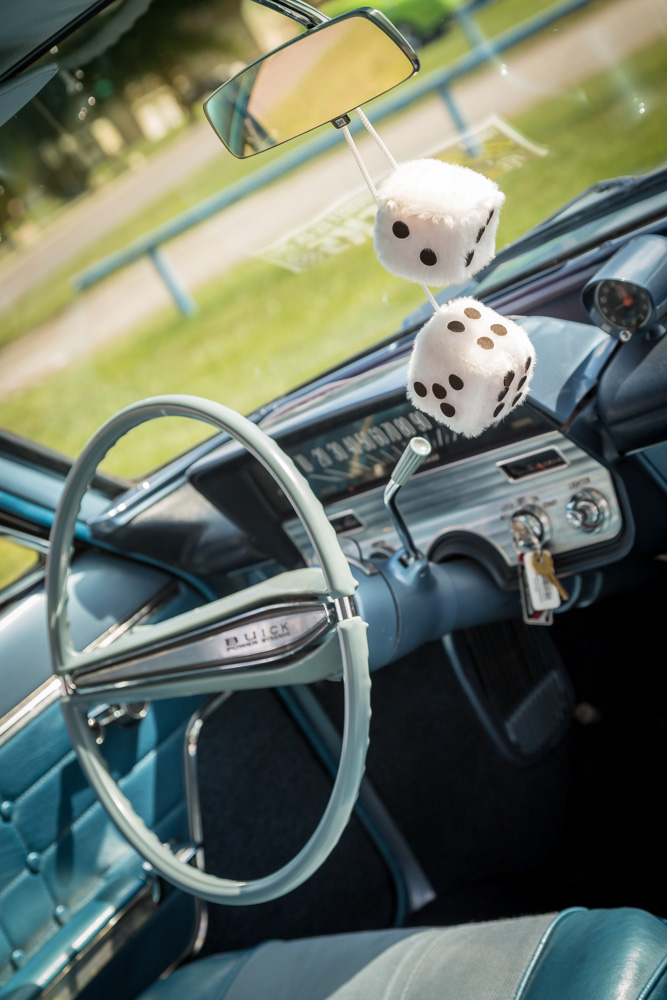 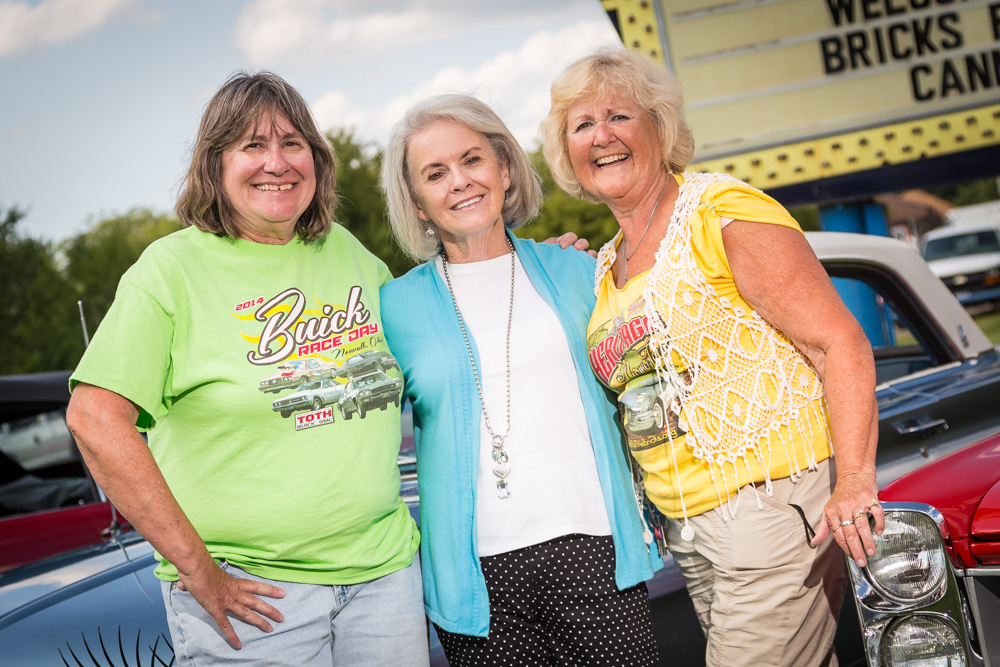 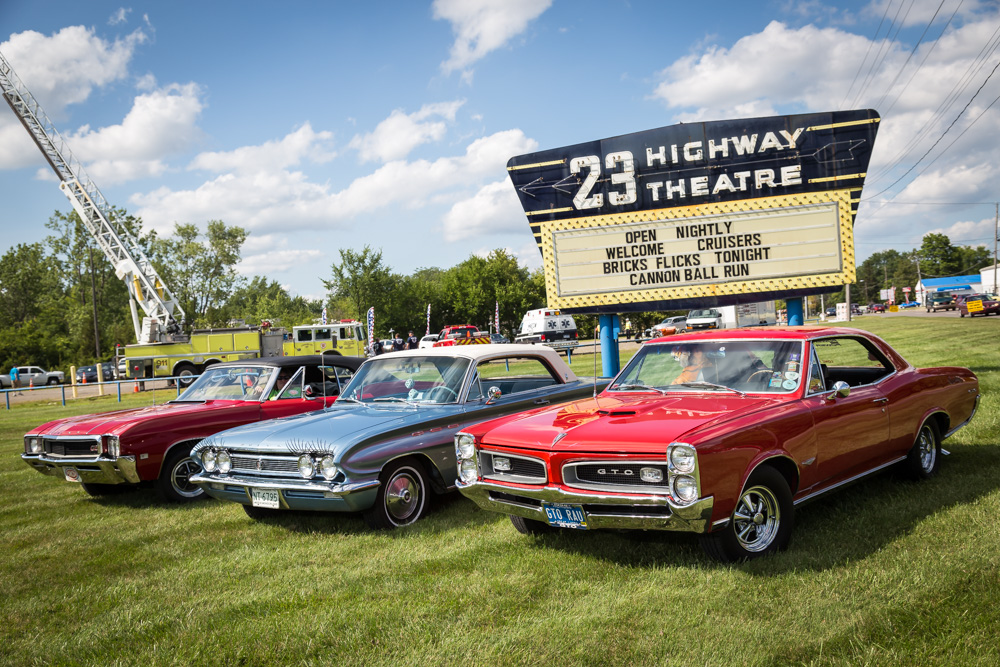 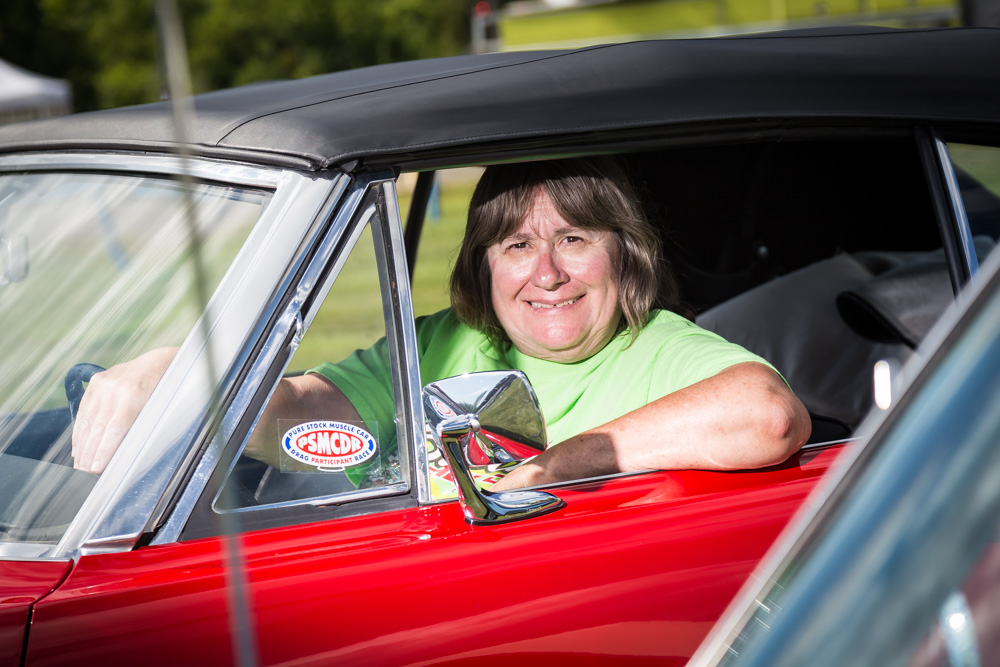 Rau has owned her ’66 GTO since 2004. “I hunted for it,” she laughs, having known exactly what car she had in mind. She was looking for a GTO that was key-ready and reliable, and a friend called her to say, “I think I found your car.”

As it turned out, it was exactly what she was looking for. She had done her homework and checked out the car’s value, so she was able to negotiate a price in line with what it was worth. “We all think cars are a man’s world, but it’s not,” she says with a smile. The words “Help Me Rhonda” are written on the side, and on the trunk, “Hit the Road, Jack,” which is her husband’s name. Rau has traveled all across the country to attend car shows in her GTO. 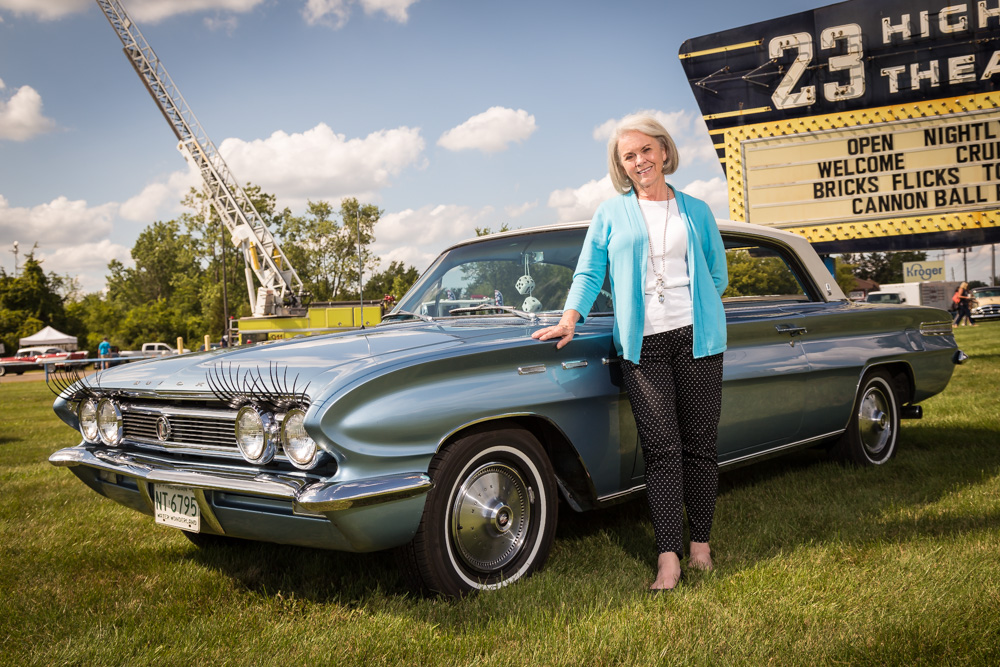 “I’m a ‘newbie’ car owner,” says Nancy Sekrenes, who retired from Chase Bank last year and received the ’62 Buick Skylark as a retirement gift from her husband, Charles. The couple are longtime Back to the Bricks volunteers. Charles owns many classic cars, but Nancy wanted her own car, titled in her name. While they were traveling last year, she saw an elderly couple get out of the Buick Skylark that is now hers. “I thought to myself, ‘that is a really cute car.’ She went to check it out and saw a “For Sale” sign with a phone number. She asked her husband to call about the car, but he really wasn’t interested, she remembers. Insistently, she told him that if the price was less than $10,000, she wanted it. “It has the original seats,” she emphasized. Finally, Charles talked to the owner and discovered the price was $6,500. He got the offer down to $5,500 but told the owner he would get back with him. “I was steamed,” she remembers. “I wanted that car!”

Finally, she got him to call and put a hold on the car, but without her knowledge Charles had already purchased it for his wife as a retirement gift. “And it’s in my name,” she says, “I love that car. Charles worked at Buick and I used to drive my dad’s Buick. I loved that style of car.” Sekrenes recently purchased eyelashes for the headlights. “Seriously?” her husband asked. “Nancy’s more girly,” Rau says about her friend.

Another reason Sekrenes loves her car is that it has room for her grandkids. She and her entire family have enjoyed attending Back to the Bricks movie night and her love of cars inspired one of her grandsons to become the owner of a classic pickup truck. “It’s all about family, to me,” she says. 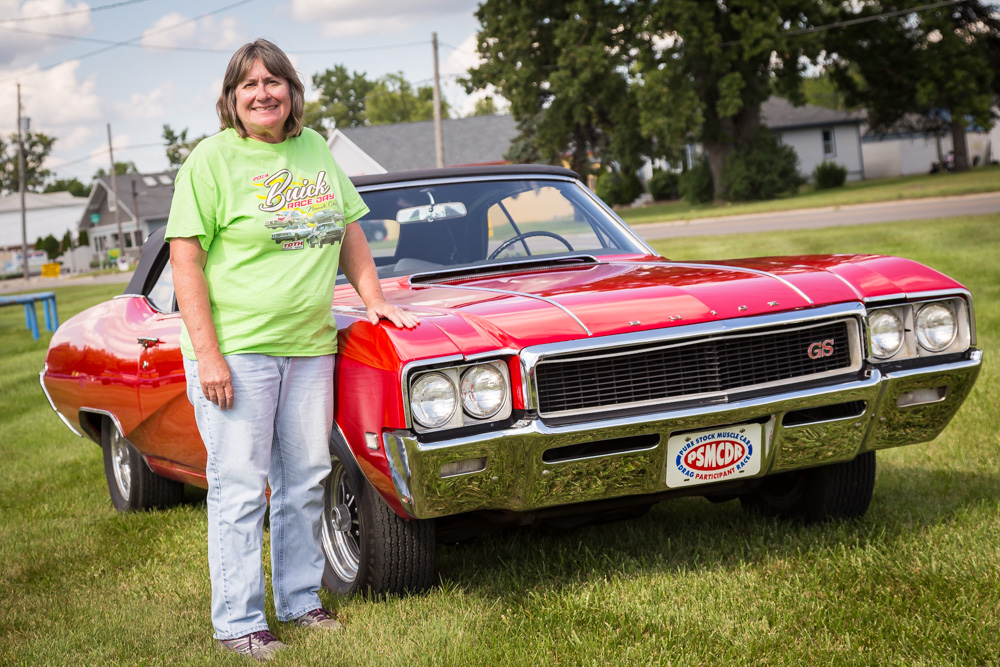 Roberta Vasilow has owned 36 Buicks since she moved to Michigan in 1979, some of which have been sold, taken to a junk yard or are now in parts, in her garage. She still has her very first car, a 1968 Buick Grand Sport. In all, she has ten classic vehicles of which a yellow, 1970 Buick GSX is her favorite. “It’s one of only 678 made, and was Buick’s response to the GTO,” she reports. “That makes us rivals,” Rau jokes. ABC12 News did a story about the restoration of her GSX. “It’s a very rare car.”

Vasilow has also loved cars all her life. Her parents both owned Buicks before they even met each other, and she always worked on cars with her dad. The year she graduated from college, she attended a job fair and signed up to interview for a job at the truck plant in Flint. She accepted the job and never looked back. “I was one of the first female engineers and supervisors,” she says. Now retired after 30 years, Vasilaow ended her GM career as the superintendent of manufacturing engineers of all the truck plants in North America. She has volunteered for Back to the Bricks since she retired and was the director for a couple of years. She has also volunteered for the Promo Tours and Tune-up Parties.

Currently, Vasilow’s passion is drag racing and she races a couple of times a year in Michigan and out of state. She turned her 1970 Buick Skylark into a drag racing car and has won trophies and prize money. She last raced in Martin, MI, taking first place in the Best 2 out of 3 category. “More and more women have their own cars now,” she reports.

According to Rau, around ten female classic car owners participate in Back to the Bricks. And for these three women, the event isn’t just about cars. “It about food, family and friends,” Vasilow says. “I enjoy being out with all the people, the classic car lovers. It’s something in your heart,” Sekrenes adds. Rau says with a smile, “To me, the biggest thing is passing a love of cars on to future generations.”
Photography by Eric Dutro