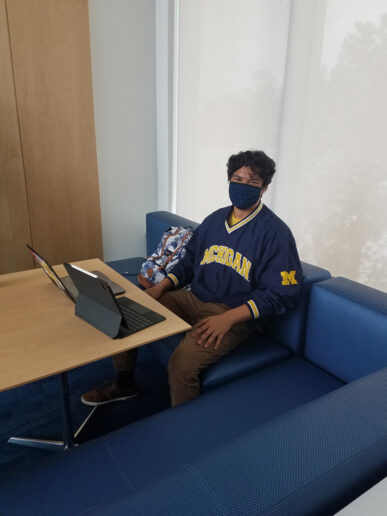 “It’s stunning,” said University of Michigan-Flint student, Manny Wright. “I’m setting up shop here. I told all my friends that from now on, if they need me, I’ll be hanging out here.” Wright was sitting in one of the student meeting areas in UM-Flint’s newly-opened Murchie Science Building Expansion. It was his first time there and he was obviously impressed. “Just walking through and looking at all of the community rooms is exciting,” he adds. “I board at Riverfront and it offers some of the same, but this is different. I’m claiming this spot.”

For Wright and other UM-Flint students, the new building offers unique and astounding opportunities. “It is a unique space designed with student needs at the top of the list,” states Susan Gano-Phillips, Dean of the College of Arts and Sciences. “We did our best to think of everything that would support them as they learn.” 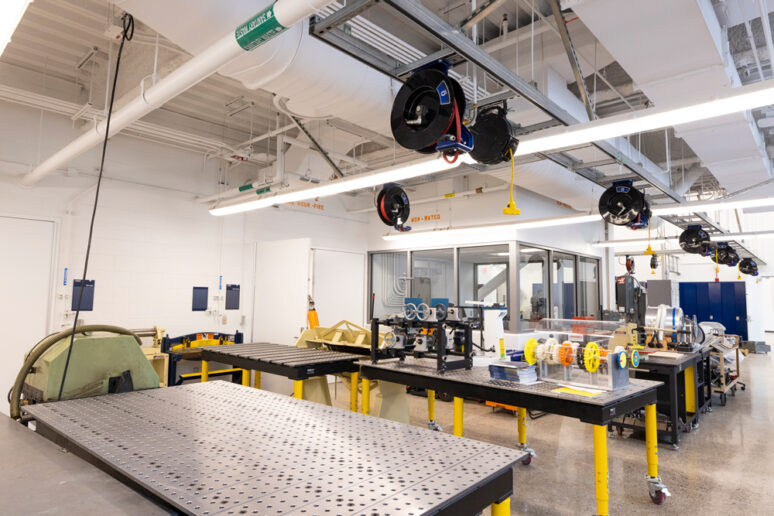 Christopher Pearson, Dean of the College of Innovation and Technology, took a major role in the design of the building using input from Gano-Phillips and the student body. “It was built with collaboration at its heart,” he says. “We want to increase STEM (Science, Technology, Engineering, Mathematics) learning visibility and promote cross-discipline collaboration. The problems we are seeing in the world are best solved by an influx of ideas from throughout educational categories.”

“The total solution involves not just science students but also those from the business, health, English and other disciplines. This is the place where they can come together and work,” adds Jen Hogan, Executive Director, Marketing & Digital Strategies. 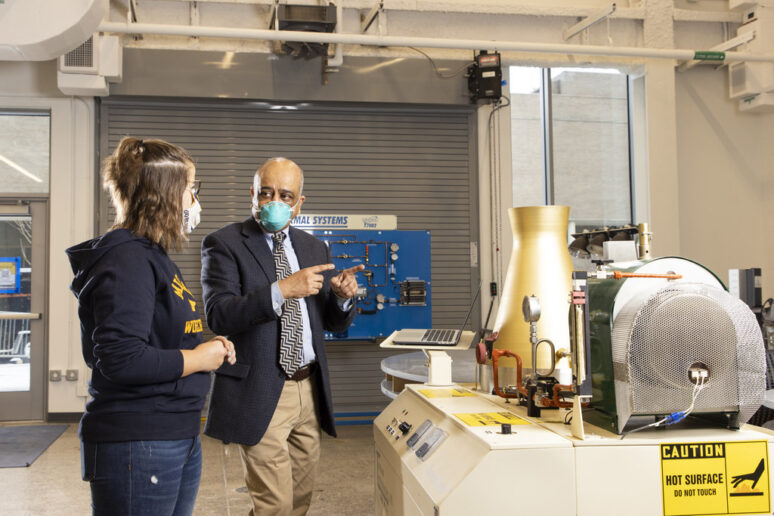 Planning for the 61,000-square-foot wing began in 2015, and officially opened after a ribbon-cutting ceremony in late January. The project was aided by a $29.25 million capital outlay appropriation from the State of Michigan, and the Charles Stewart Mott Foundation awarded an $11 million grant to help fund construction, upgrade the existing building and support STEM studies campus-wide.

The wing features thermal systems, dynamics and vibration, solid mechanics and materials, fluids (wind tunnel included) and robotics labs; design lab and fabrication workshops; independent and group research labs; reservable group-study rooms; student club hub and learning commons. A special general science lab was finished for high school students enrolled in the Genesee Early College program that features the best of science apparatus to give the youngest students an unmatched opportunity. The majority of labs and spaces feature full wireless access, network and power supplies, whiteboards, projectors and approximately $2 million in state-of-the-art equipment including 3D printers of every medium, multiple robots and safety apparatus. The students will want for nothing. “This building has the potential to revolutionize the way teaching and learning happen. Every student will be connected and will have an opportunity to present their ideas and solutions anywhere in the building at any time,” says Gano-Phillips. “In many ways, students will be ahead of the curve. The technology we are bringing in is exactly what they will see in the world when they start their profession.”

The building was also planned to be as energy efficient as possible in design, construction and operation. It is tracking toward LEED Gold status for efficiency, making it the first UM-Flint building to do so. “Energy efficiency is important to us and our students,” says Gano-Phillips.

A few finishing touches are being put on the building and by the fall semester of 2021, it will be 100 percent ready and open with a full course load, which coincides nicely with the opening of the new College of Innovation and Technology (CIT) headed by Christopher Pearson. “It’s exciting,” he says about the CIT. “We want to bring curriculum that will teach tech students in ways that make a person or job robot-proof. As the world turns more toward automation, we want to provide a way for students to be employable. We feature hands-on education that promotes critical thinking and problem-solving. The building provides the perfect atmosphere.” 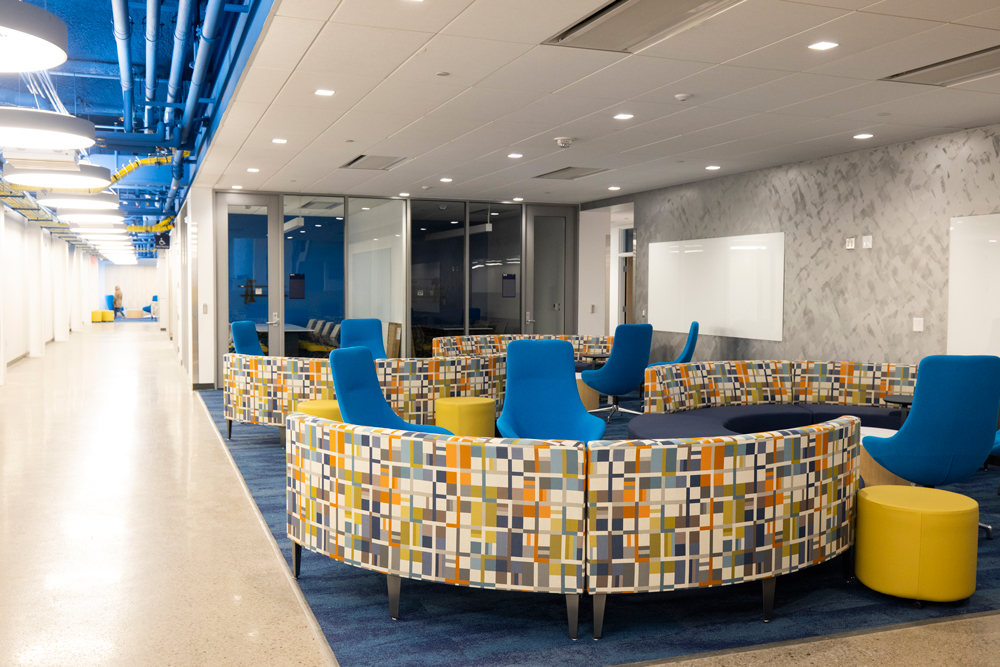 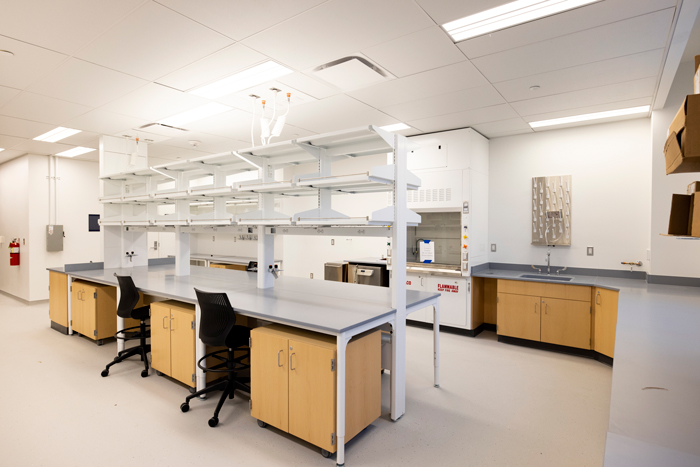 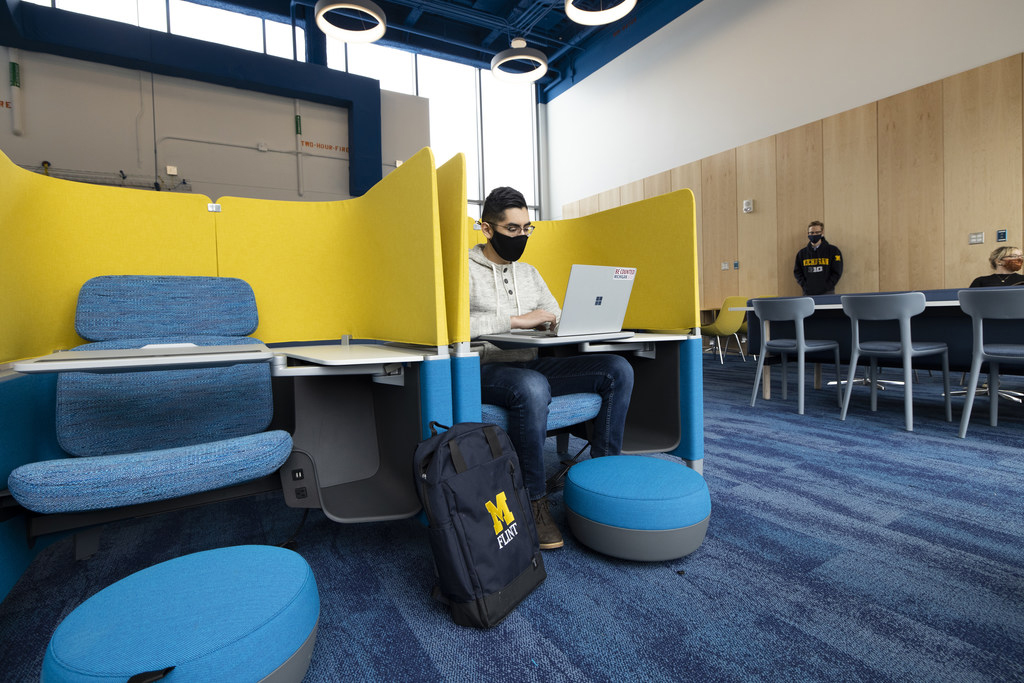 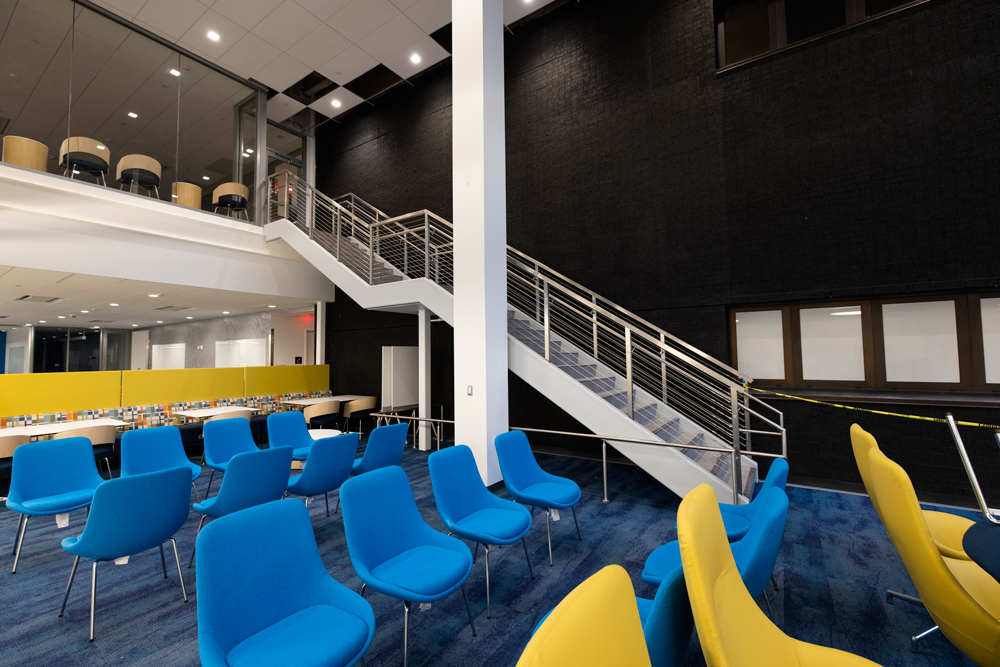 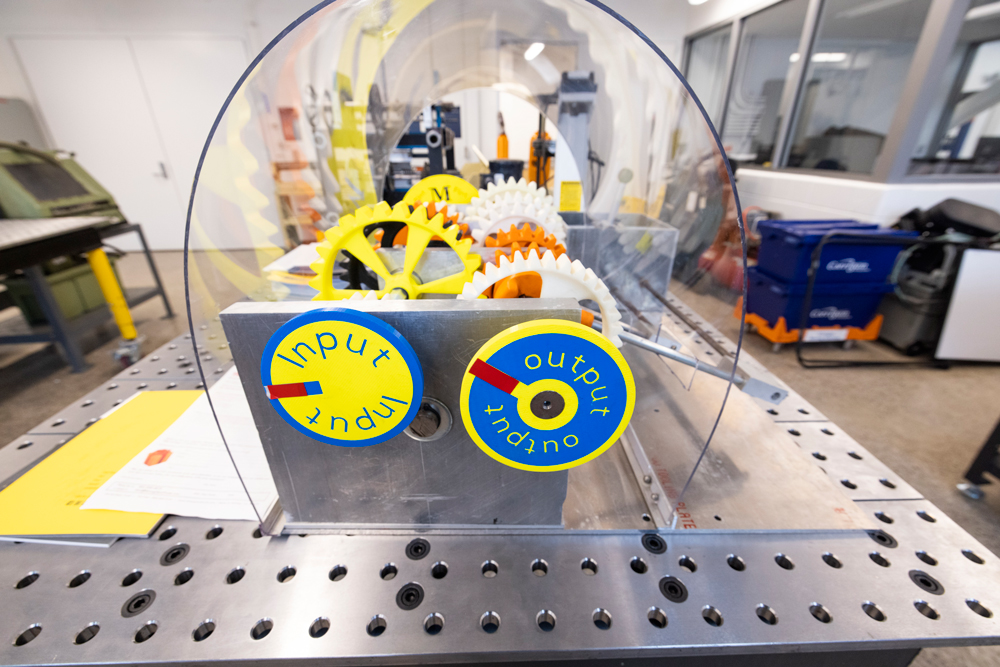 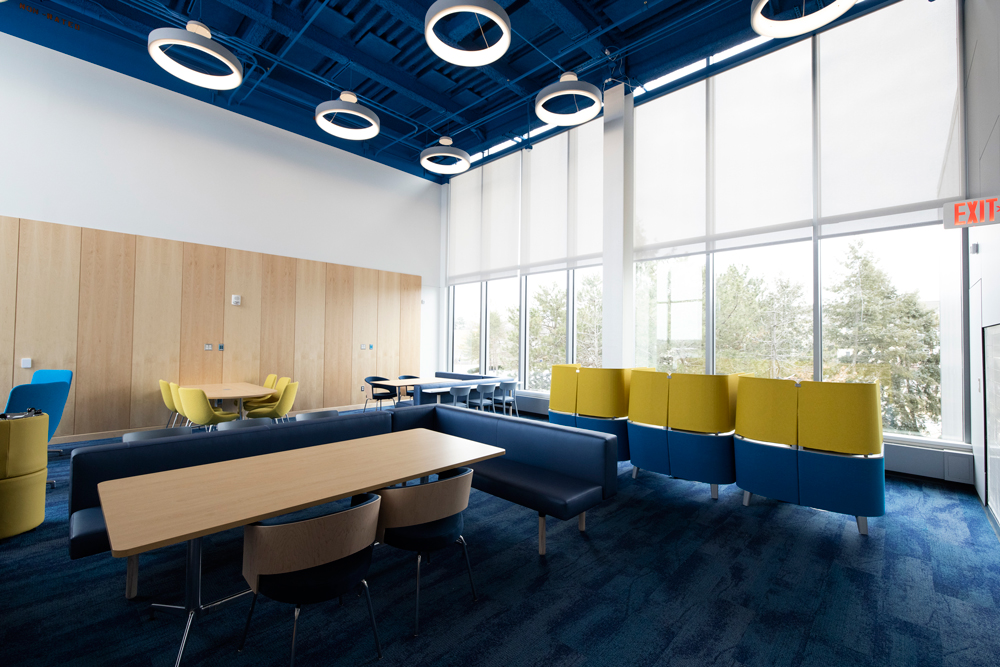 The CIT offers four-year bachelor’s degrees in technology that will prepare students for professions in fields such as automation, artificial intelligence, manufacturing, cybersecurity and more. CIT students will work with industry partners such as Consumers Energy, General Motors, Nexteer and others. Currently, two degree programs are offered. A Digital Manufacturing Technology degree offers the chance to become a professional in the world of automation. The Information Technology & Infomatics degree provides the education needed for a job in cyber security, data management, networking and mobile systems.

The Murchie Science building expansion has everything for students to meet, learn, question and innovate. With all it has to offer, it will be, without a doubt, a favorite of student organizations, clubs and others like Manny Wright, who appreciates a space built around their individual needs. It was created to be a place where a diverse student body with a thousand different minds and areas of expertise can come together and find the best solution using today’s best technology. “It’s at the intersection of people and technology,” states Pearson. Gano-Phillips agrees, adding, “It is a place for collaboration unlike any other.” 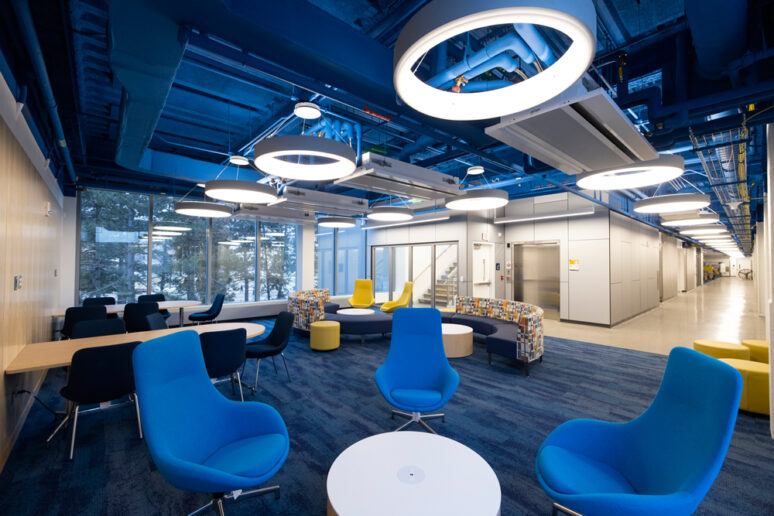 The expansion was planned to be as energy efficient as possible in design, construction and operation.