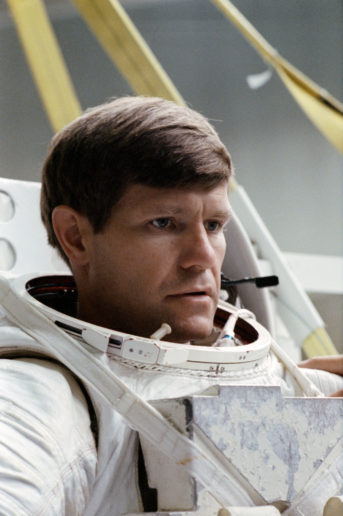 Roughly 130 miles above the Earth’s surface, McMonagle was floating in the Space Shuttle Discovery’s gravity-free cabin during its spring, 1991 mission. He was in space for the first time following a distinguished run as an Air Force fighter and test pilot. As he peered out Discovery’s windows, the sight of countless stars against a vast, dark backdrop above the deep blue Earth, along with endless emerald green produced by the Southern Lights (Aurora Australis) greeted him. “The stars don’t twinkle up there with nothing obscuring the atmosphere, and you can see ten times as many as you do from Earth,” McMonagle recalls of the first of his three Shuttle missions. “The view from the dark side of the Earth was spectacular and we were fortunate to be at the right altitude at the perfect time to catch the Southern Lights which looked like wavy, green curtains.” McMonagle remained awestruck, but the mission, which demanded around-the-clock experiments and maneuvers, beckoned. 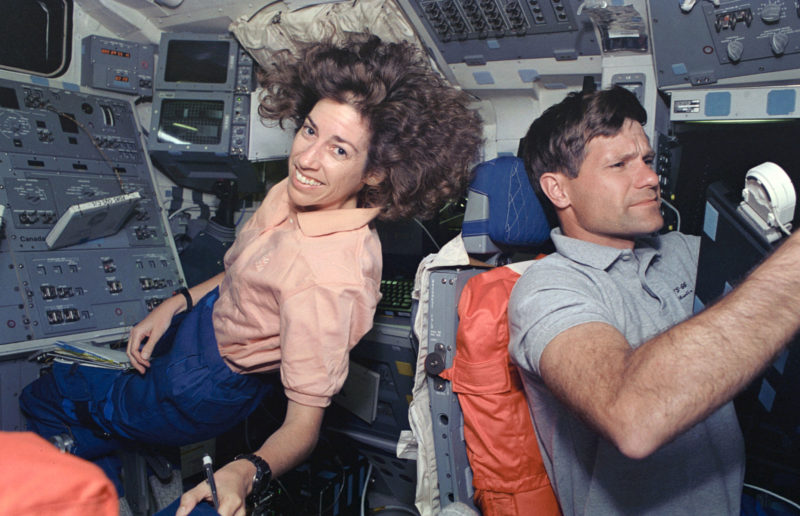 That was the 1970 Hamady High School graduate’s world in the 1990s, during which he became the first astronaut to serve as a mission specialist, pilot and commander, logging more than 605 hours in space and traveling nearly 10.6 million miles. McMonagle then spent time in research and development of new technology before becoming launch integration manager at Kennedy Space Center in Florida. Private industry lured him away from NASA in 2000, but the 67-year-old remains involved in space exploration through his work at Raytheon, a leading aerospace and defense firm.

Along the way, McMonagle earned numerous awards and was inducted into the Michigan Aviation Hall of Fame in 2004. In 2007, his former high school became Colonel Donald McMonagle Elementary School. 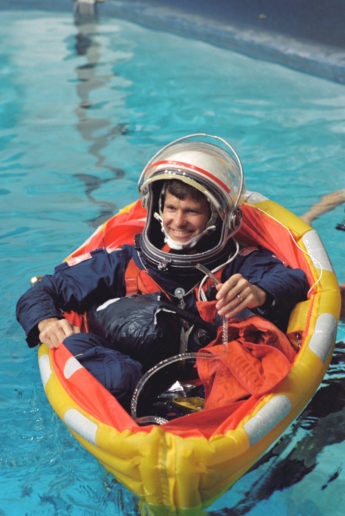 Conversations in that school put McMonagle on the path to becoming a shuttle astronaut. A National Honor Society member and football, basketball and track letter-winner at Hamady, McMonagle was contemplating career choices during his junior year, when teacher Ted Martin suggested the Air Force Academy in Colorado Springs. “I thought that made sense for me,” says McMonagle, who now lives with his wife in Tucson, AZ. After he was accepted to the Academy, a friend told him he was destined to become an astronaut. “That just does not happen to guys like me,” he blurted out after contemplating the words and then developing a steely resolve. “When I thought more about what he said, something clicked,” McMonagle recalls. “From that point, I did everything with the goal of becoming an astronaut.”

Flight and space (and spaceflight) had captured McMonagle’s imagination from an early age. He was nine when John Glenn became the first American to orbit the Earth in early 1962. “A picture Glenn took of the curvature of Earth’s horizon appeared in one of my text books, and I remember taking a ruler out and measuring it as a way of proving to myself the Earth is round,” he says.

Even high above the Earth and back. 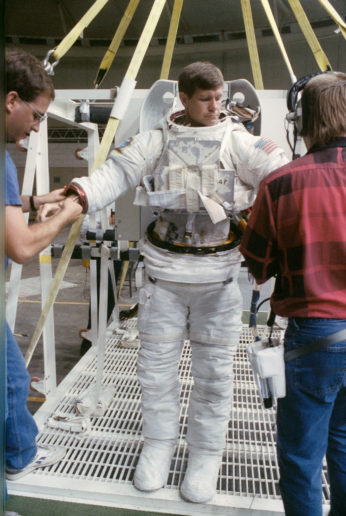 More than 45 years later, McMonagle told that story to Glenn himself while overseeing the launch of the 1998 mission which sent him back into space at age 77. “It was during the pre-launch dinner at NASA’s beach house at Kennedy Space Center,” McMonagle says. “It was thrilling just to be involved in such an historic launch and John listened to my story with interest. He was a true gentleman.”

After graduating from the Air Force Academy in 1974, McMonagle entered pilot training. In 1981, he entered Air Force Test Pilot School at Edwards Air Force Base in California and was named outstanding pilot in his class. Between 1982 and 1985, McMonagle was a test pilot for an advanced technology version of the F-16 fighter. “The advanced technology F-16 had some revolutionary things for the time, like voice interaction controls, helmet technology to lock in targets and complex maneuvering,” he remembers. After attending Air Command and Staff College, he was named operations officer of the 6513th Test Squadron at Edwards. Among other awards, McMonagle earned the Meritorious Service Medal, three Air Force Commendation Medals, the Defense Meritorious Service Medal and Distinguished Flying Cross from the Air Force, all the while keeping in mind his friend’s prediction of a NASA career.

After falling short of being selected as an astronaut in 1984 and 1985, McMonagle tried again in 1987 and was one of 15 chosen from hundreds of applicants. He had been among the final eight in 1985, but only six were selected. “I didn’t think I was any more qualified than two years earlier and came away feeling I had done poorly in my interview, but two months later I received a call saying I was in,” he says. 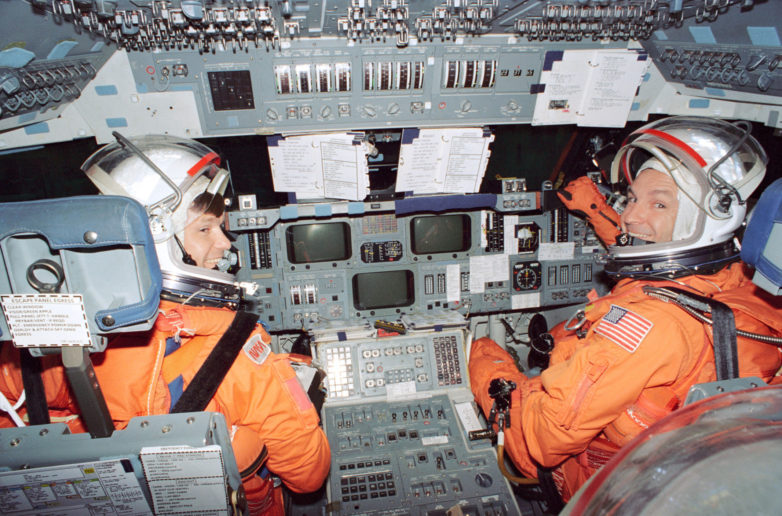 Extensive training followed, including dealing with weightlessness, flying the shuttle, handling emergency situations and learning to use the Space Shuttle’s zero gravity toilet. McMonagle was part of a seven-member Discovery crew which launched from Kennedy Space Center on April 28, 1991. “Going into space was mostly how I expected it to be, but I sure felt a lot of pressure on my chest when we launched,” McMonagle says. “We collected data for use with the Strategic Defense Initiative (known as Star Wars) on signals that would be used to track nuclear missiles.”

McMonagle then served as pilot aboard the Space Shuttle Endeavour during its seven-day mission in January of 1993, which featured the deployment of a tracking and data relay satellite, collection of information through celestial x-rays and the demonstration of physics principles of common toys to an interactive audience of elementary school students across the country.

“His expertise, wisdom and contributions to
the safe and successful exploration of
space have been invaluable.”
Ron Dittemore, Space shuttle program 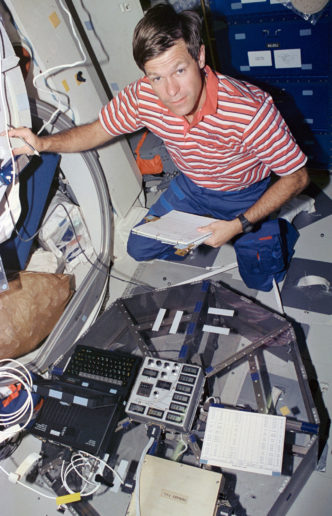 The next time, McMonagle got to sit in the “big chair” when he commanded a crew of six aboard the Space Shuttle Atlantis during a six-day mission in November, 1994. It was highlighted by collecting data about the sun’s energy output, chemical makeup of the Earth’s middle atmosphere, and how those factors affect global ozone levels.

In 1996, McMonagle was charged with establishing a new Extravehicular Activity Project Office at NASA responsible for managing the resources, planning and execution of spacewalks. He also budgeted funds to develop a spacesuit for use on Mars. “It was a challenge, because Mars’ atmosphere is 95% carbon dioxide, totally different from the moon, but we made good progress,” he says.

The following year, he was named launch integration manager at Kennedy and held the post until taking a position with aerospace firm Pratt & Whitney which supplied engines for the Space Shuttle program and Atlas V rocket, among others. 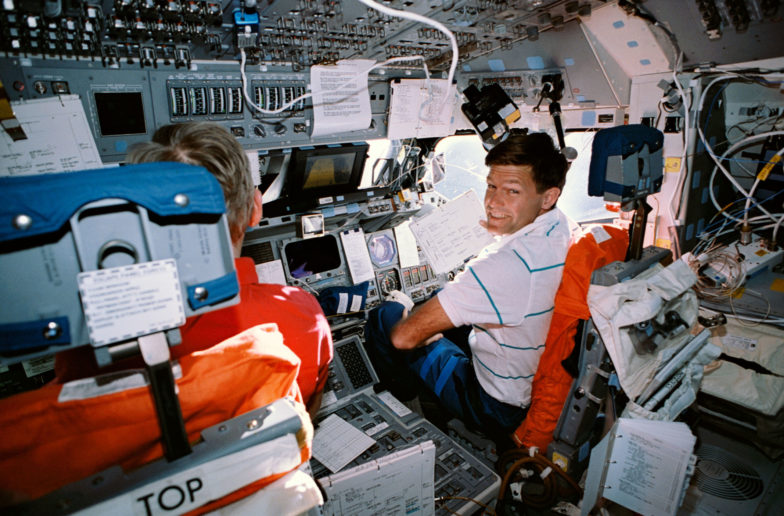 He earned three Space Flight Medals, the Exceptional Service Medal and Outstanding Leadership Medal from NASA. “Don has given tremendous service to NASA and this country,” Space Shuttle Program Manager, Ron Dittemore said when McMonagle announced his departure. “His expertise, wisdom and contributions to the safe and successful exploration of space have been invaluable.”

McMonagle joined Raytheon in 2006, and is now the program manager for the Air Force’s Launch and Test Range Systems Integrated Support Contract within RGNext, a joint venture between Raytheon and General Dynamics. “Basically, I tell people we are sending portals into space in an effort to make space travel safer and more accessible,” he says.

At least once every two years, he tries to visit the school that bears his name. “That’s my way of paying it forward to all the teachers, coaches and counselors who helped me get where I am,” he says. “I love sharing my experiences with the students and telling them not to put limits on themselves. With the right knowledge and persistence, they can all go far.” 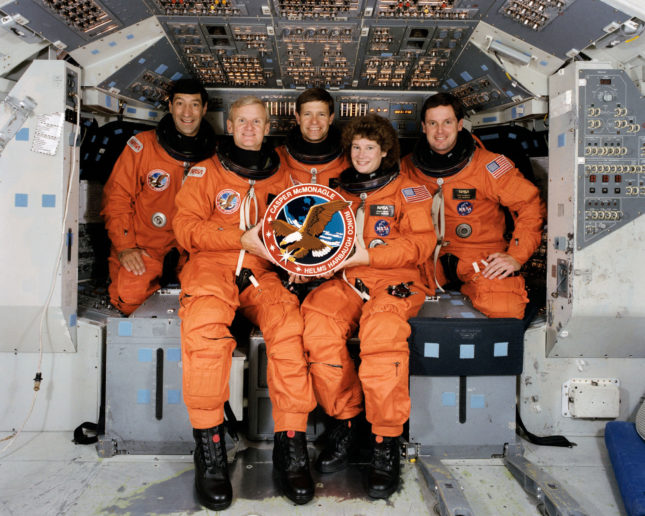