Arab-American Heritage Council (AAHC) Executive Director, Devin Bathish is proud of the roles that Arab Americans have played in Flint’s history. “Arab-Americans have been a part of Flint since the 1940s,” he says. “We came to Flint because of the opportunities of the auto industry and the population. We moved in, worked in plants and set up groceries and small business. We have been successful here.” His own family immigrated to Flint from Palestine in 1970 and he has called Flint home since then. “I am proud to be from Flint and it is wonderful to see the city’s people succeed,” he adds.

Founded in 1980, the AAHC is the only non-religious Arabic organization outside of Metro Detroit. It originally functioned as a volunteer organization, awarding scholarships and hosting community picnics. All of that changed after the tragedy of 9/11. “After 9/11, we held a major meeting of community leaders to formalize the organization. We acquired an office and an official staff. We felt a need to reintroduce ourselves to non-Arabs, to show them who we really are,” Bathish recalls. They quickly expanded and founded their mission on three principles. The first is educational and cultural programming. The AAHC hosts community events and workshops, teaches Arab culture and language, and helps students succeed. They have awarded over $40,000 in scholarships since 1996 at their annual banquet and have attended local schools to teach students and families about Arab-American culture. The second principle is immigration and language translation service. “In 2002, we started an immigration program. We help anyone, not just Arab-Americans, navigate the process legally,” explains Bathish. “We help with cases, references, filing and we provide support in cases of discrimination.” The AAHC also partners with local organizations to provide Arabic to English (or vice-versa) translation to whomever needs it. The third principle is community outreach. The AAHC has been involved in helping communities during the water crisis and more.

Throughout his life in Flint and at the AAHC, Bathish has seen positive change in the Flint community regarding Arab-Americans. “When we first came here, we had to hide who we were. The original name of the AAHC was the American International Forum. Over time, we began to really earn recognition. Through hard work from business owners such as the Farah and Hamady families, judges and lawyers, physicians, and our community impact, we have gained acceptance,” he continues. “We no longer have to hide. We are beginning to be viewed here as citizens of Flint and not ‘others.’ We are proud to be Arab-American.” 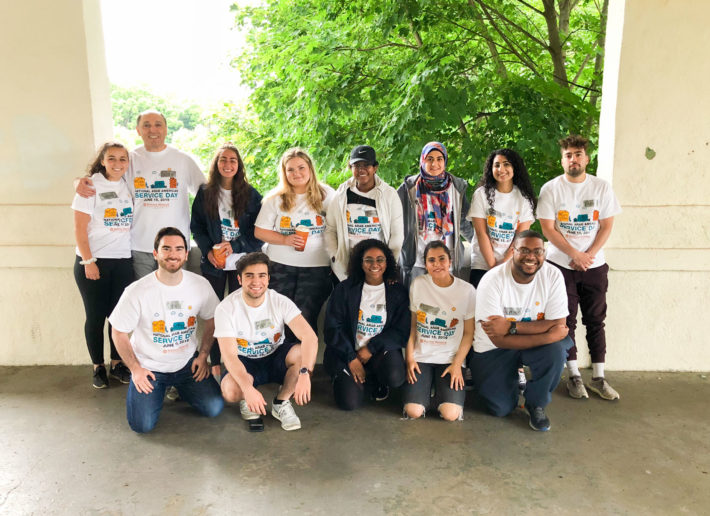 Despite success in Flint, Bathish acknowledges that they still have a way to go. He still receives “interesting” phone calls and hears of personal interactions that are degrading or wrong. “The challenge will continue to exist,” he acknowledges. “We make it part of the mission to uphold a positive public image while downplaying discrimination. It may not be intentional, but instead, may be due to media and Hollywood stereotypes and the fact that maybe a person has never met an Arab-American.”

According to Bathish, there are between 16,000 and 20,000 Arab-Americans in Genesee County and each holds different beliefs, dreams and aspirations. “The future of Flint’s Arab Community is bright and the younger generation is very promising,” Bathish says with a smile. “The time to reinvent the city is now. We want to reinvent Flint to include everyone. We don’t want nationality, religion and identity to be a hindrance to success. I want that to be the message of Flint, our community and our country.”

The 23rd Annual Arab-American Banquet will be held on October 30 at the Riverfront Center and is open to anyone interested in attending. For more information, visit the AAHC website or Facebook page.