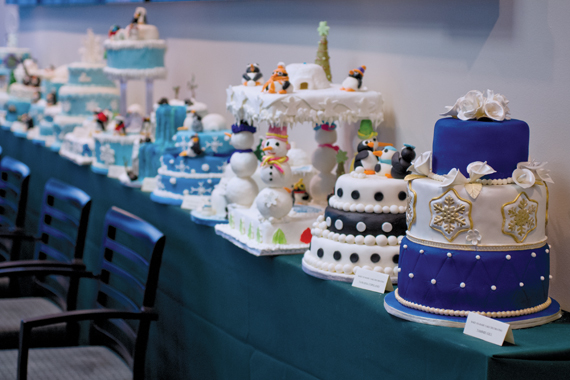 Located within the Prahl Center of Mott Community College is one of the city’s finest restaurants. The classes held therein make MCC’s culinary arts program the fourth most studied subject on campus, but the restaurant itself goes virtually unnoticed by the general public.

This hidden gem is Applewood Café. Its namesake is the well-known Applewood Estate, former home of Charles Stewart Mott, which lies on land adjacent to the college grounds. Applewood Café has spent the last 14 years in the Prahl Center, and after recent remodeling efforts, it functions as an upscale dining establishment for patrons while simultaneously providing students in the culinary arts program experience in food preparation and service. About 200 students are currently enrolled in the program, which offers nearly 20 course sections of lecture and lab-oriented study. It is during the lab sessions that students open the café to afternoon customers and offer those who dine just over a dozen menu items, including appetizers, entrées and desserts. The students working at the café include local high school and Mott College trainees, many of whom go on to further their studies at universities such as Northwood University, Ferris State University, Rochester College and Cleary University.

The current coordinator of the MCC Culinary Arts Program is a former student of the same. Chef Matt Cooper, C.E.C. is a son of Flint who knew early on that he wanted to work with food. He has been with the program at MCC for 12 years, and explains that what makes Applewood unique is its originality and specialties. “Everything is made here,” he says, even the sausage, made in-house in “Meat Fab” class. Cooper takes pride in his work, and his goal is to get students to value all cuisine. “We’re training our students to make just about anything, and teaching them that they should hold everything in high esteem,” he explains. “I try to teach them to have respect for all foods, and we of course want our students to be upright; to be the wheat and not the tares.” A typical summer for Cooper involves drafting the menu for the upcoming fall semester. Once classes begin, Cooper teaches with a firm hand, although he’s always willing to extend grace. He tells his students, “if you make a mistake, make it here.” He explains that “anyone can cook a chicken, but not everyone can cook a chicken perfectly. If I teach you why the recipe works and you learn the science behind it, you will know how to avoid a mistake.”

As the culinary arts program and Applewood Café continues to grow, Cooper would admittedly like to see a higher graduation rate among the students. “I tend to lose students to the marketplace,” he says. Cooper also admits that he was one such student who “left and came back” a few times. He notes that the restaurant business is one of the few professions that continue to see growth, even after the most recent economic downturn. As a testament to the program’s success, MCC and Applewood Café have had several dozen students go on to become general managers of top restaurants, since many businesses readily scout MCC’s talent.

Those who are presently training have plenty of work on their hands. A typical dining experience at Applewood Café includes a host and server, and Mondays offer live music from students of the music program on campus. Recent menu items include French Onion soup, uniquely served in a glass, and an intricately prepared Ratatouille. The food is choice cuisine and the service is punctual and polite.

The café is faithful to open even if they are light on students, since Cooper believes in professionalism. “When a student is absent,” he says, “we have to pick up the slack just like any other restaurant.” Even with the trappings of other eateries, Applewood’s approach to food preparation and service and its unique selections make this restaurant unlike many in the area. It would behoove those who have yet to enjoy Applewood Café to turn up on campus Monday through Thursday from 11:30am to 1pm during the fall and winter semesters at MCC to partake in this fine dining experience.

Are you interested in purchasing photos from this story? Go HERE and select the “Applewood Cafe” category.