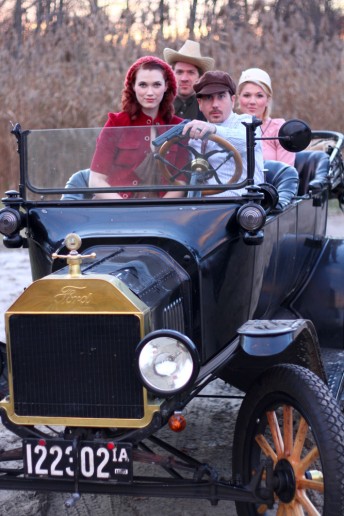 The Ann Arbor Civic Theatre has remained a beloved part of the theater community since 1929 when it began as a play-reading group. With increasing interest, the Civic Theatre developed further and began running full productions in the auditoriums of local public schools. Its operational space has changed over time, and it currently occupies space on Ann Street near Downtown for its office, rehearsal studio, set-building and storage, and 40-seat Studio shows.

In addition to the smaller, edgier Studio shows, folks can enjoy other fine productions put on by the Civic Theatre at these locations: Lydia Mendelssohn Theatre inside the Michigan League, Arthur Miller Theatre inside Walgreen Drama Theatre and Children’s Creative Center on Pauline Blvd. So when you buy tickets, make sure you know which place you need to go to!

Known for its high-quality productions, the Theatre offers plays that will reach into the hearts of audiences of diverse interests. On its busy calendar, you’ll find musicals, comedies, dramas, original plays, recently-on-Broadway productions and children’s theater. Its Junior Theatre program offers challenging summer camps and improvisation workshops, drawing local children who want to test and develop their aptitude for stage performance.

Show prices are affordable, which makes this venue a perfect outing for those watching their entertainment budget. “Our main stage plays are priced below most local professional theater companies, and we offer great discounts for students and seniors,” says Cassie Mann, Program Director.

Consistent with its humble beginnings, the Ann Arbor Civic Theatre takes pride in its community focus. “It is the only completely open theater in the area,” says Cassie. “All aspects of production are open to anyone.”

Kelsey Museum of Archaeology 434 S. State St.
More than 100,000 ancient and medieval objects to view from the
Mediterranean and Near East. Upcoming exhibit is Wendy Artin’s
watercolor paintings of ancient sculptures, June 5-July 26.

The Michigan Theater 603 E. Liberty St.
Offers a variety of films and live entertainment acts and its original 1927
pipe organ is still played for evening movies. Wine & film series runs thru
May 27 and Cinetopia International Film Festival begins in June.

State Theatre 233 State St.
Marketed under the Michigan Theater, this venue offers a variety
of thought-provoking films at reasonable prices.

University Musical Society
This non-profit affiliated with U-M has provided fine arts performances
since 1880 at various A2 locations. A favorite is historic Hill Auditorium.