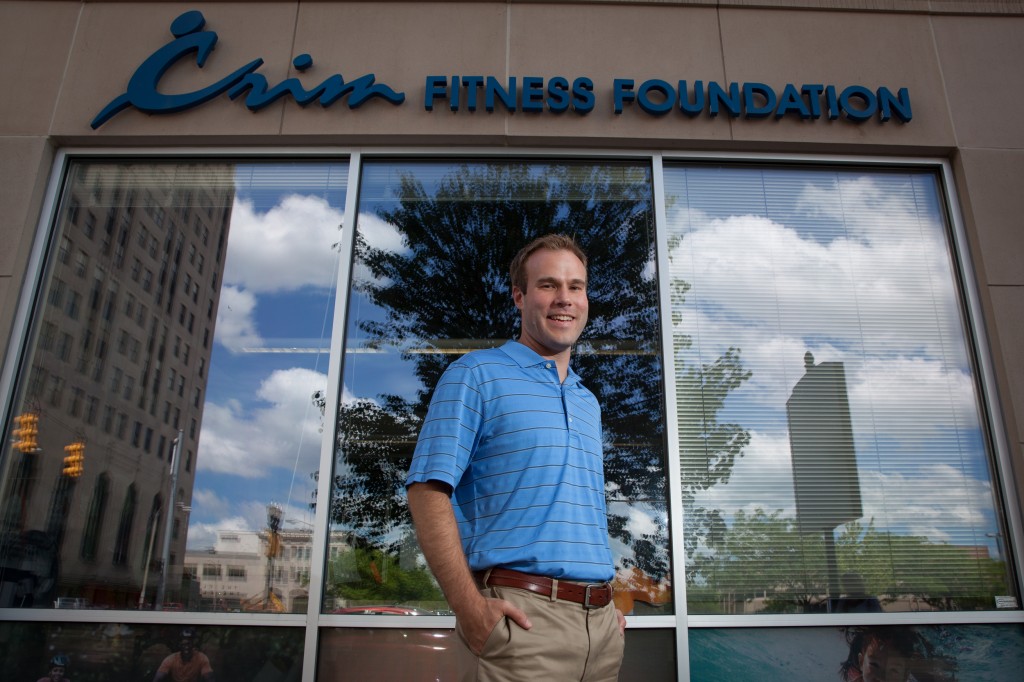 Andy Younger is the man in charge of the biggest day of the year. As director of the Health Plus Crim Festival of Road Races, he oversees every tent, water bottle and volunteer on the fourth Saturday of August when the city is packed with people from all over the world. This is Andy’s second stint at the helm of Race Day, and he says there are hundreds of people and volunteers who make Flint’s best event run smoothly. So, what does race day look like for the man at the top? My City Magazine caught up with him to find out.FRIDAY NIGHTAndy and several other key players actually spend the night at the Crim office. Andy sets up air mattresses and bunks with his team to ensure they will be up bright and early on Race Day.SATURDAY, RACE DAY4-4:30 AMThe day begins with lots of coffee and a left-over bagel. “By this time, we’re running on pure adrenaline,” says Andy. “We’re already exhausted from Friday’s onemile race, but exhilarated knowing that we’re creating an event that will be enjoyed by 60,000 people.”5:30 AMAndy touches base with the course manager, who communicates via radio with volunteers walking the course to make sure it is ready, checking that water and emergency stations are set up.6:30 AMPeople are starting to show up for the race – same-day registers, participants, spectators, volunteers, etc. “The entire course has to be completely closed to traffic by 7am, so we’re in a hurry,” explains Andy. Volunteers are bustling about getting pizza and beverages ready, and food vendors are setting up their stations. 7 AMThe deejay gets started and Announcer Michael Dach arrives.7:30 AMAndy meets with the Crim Presenting Sponsors, dignitaries and the media, a big part of his job. He’s now positioned atop the scaffolding to watch the start of each race. The Wheeler Race begins, allowing those participants to cross the finish line before the race schedule continues.7:50 AMAccording to tradition, runners who have participated in 30 or more Crim races enjoy the privilege of starting ten minutes early. Spectators cheer wildly as they cross the start line. About three minutes before 8am, the crowd becomes silent as the Star Spangled Banner is sung.8 AMEverything is in place and everyone is prepared. “This is when I can breathe my first sigh of relief,” he laughs. Andy does not see much of the race as he hurries off to the finish line to prepare for the post-race events. “I mainly focus on the start and finish line and the festival area,” he says.8:15 AMThe last runner crosses the starting line. Approximately half an hour later, the first runner crosses the finish line. “I like to be there to congratulate the winners,” Andy says. “It’s a real thrill to do that; you can just feel their elation. I wish I could congratulate all the runners!”10:30 AMAndy catches a glimpse of his wife Elena and their twin daughters Isabella and Cenna during the 5K Walk. “I get to see them for the first time in three days,” Andy shares. “I almost cried when I saw them last year.” In between the races, Andy talks to the media and connects with sponsors and other dignitaries. He checks in with the timing company, making sure it is all set.11 AMThe awards ceremony takes place. Andy welcomes local politicians, community leaders and honored guests during the ceremony and presents awards to the over-all race winners.12 NOONThe final race of the day, the Teddy Bear Trot, begins.3 PMThe festival comes to an end and cleanup begins. “The cleanup happens amazingly fast,” Andy explains. It takes an entire village to get it done: a professional company moves the trash, the tent comes down, tables are folded and the banners, chairs and barricades removed. Cleanup is completed by 4:30 or 5pm. “You almost wouldn’t know that 60,000 people were just here!” exclaims Andy, who must take some time from cleanup to connect with the media. 5:30-7 PMIt’s time to go home. Last year, Andy said he was too tired to celebrate. “I was just happy to see my family and to have another great event go so successfully.”Race Day means a great deal to many people, according to Andy. It has become an honored tradition for family gatherings and joyful celebrations associated around the Crim. “It’s almost a family holiday for many people,” Andy says. “What a privilege it is for me to be a part of that.”