After hanging up his helmet, packing away his cleats, and putting his pads to rest as a middle-schooler, Tyler Deering was unsure whether he would ever play football again. Instead, his primary focus at Bentley High School became basketball, and he developed into a key component of the Bulldogs’ starting lineup, earning honorable mention all-conference honors last season. Meanwhile, he watched the football team struggle season after season, never winning more than three games in a single year after last qualifying for the playoffs in 2008.

However, in the middle of basketball season last winter, Tyler began to consider a return to the gridiron this fall as a senior. Still, he remained on the fence regarding the decision until Bentley announced a football legend in the area was hired as its next coach. 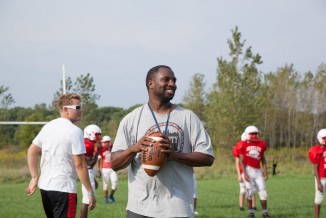 In January, Athletic Director Jeremy Trent selected Andre Weathers, a standout defensive back at Flint Central, the University of Michigan, and in the National Football League, from a pool of roughly 20 applicants. Andre also sports a national college championship and National Football Conference title rings. In fact, he is one of only two Flint-area football players who is a member of both a national championship team (Michigan in 1997) and a team that played in a Super Bowl (New York Giants, Super Bowl XXXV in 2001). The other is former Powers standout, Todd Lyght, who helped Notre Dame to a national title in 1988 and the St. Louis Rams win Super Bowl XXXIV in 2000.

And the best part? “All my friends became excited about playing football, too, and how we’re a pretty good-sized team [28 players] for a small school,” Tyler says. “Because of what he has done in football and how well-known he is throughout the area, it’s just really exciting for us. He knows a ton about football, and knows what he’s doing when it comes to coaching.”

Andre, now 39, felt Bentley offered him the perfect opportunity to finally become a head coach, after being an assistant coach for several years at various schools in the area. “I like the district and know some of the coaches, so I thought it would be a good spot for me to run my own program, something I felt ready for,” says Andre, most recently an assistant coach at Flint Northwestern. “Things have been going pretty well and we’ve had a pretty good turnout for the program, and the kids are buying into what we’re trying to do – working hard with solid attitudes.”

Just the fact that numbers are up and turmoil is down represents progress from a year ago, when Bentley finished the year with a 2-7 record and only 18 players. The program’s co-head coaches resigned suddenly before the season ended, citing a rift with school administration, after which Jeremy Trent ran the team along with the remaining coaching staff. “I was very excited when Andre submitted his résumé and the members of our interview committee immediately knew he was the man for the job,” Jeremy says. “Our entire community is very happy to have Andre here and I couldn’t be any happier with the way things are going. Our kids love Andre, practices are going well, and he has put together a great staff and we are starting to build a respectable football program.” 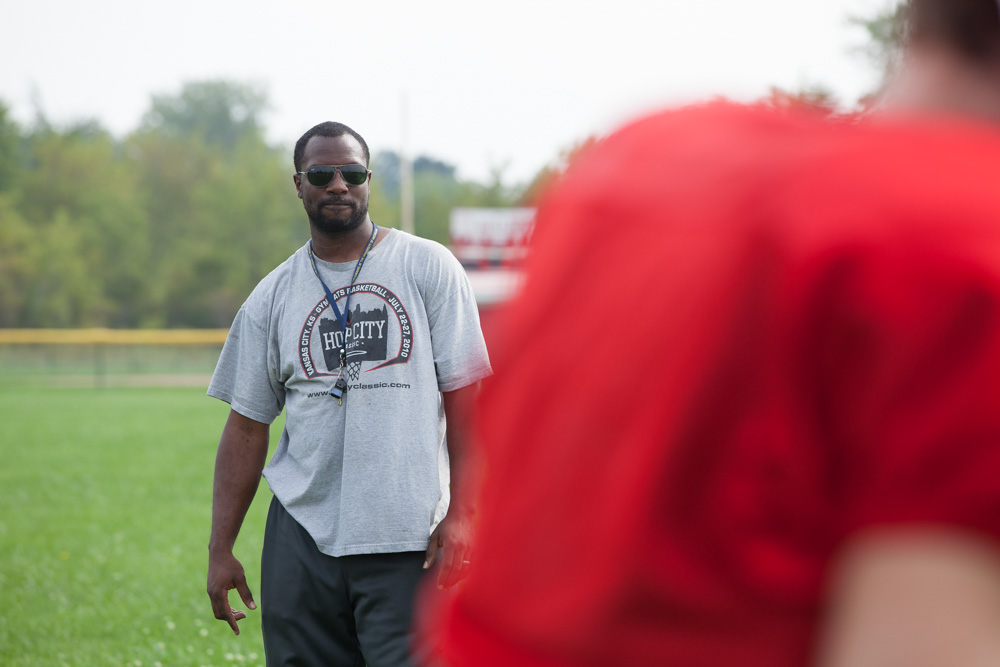 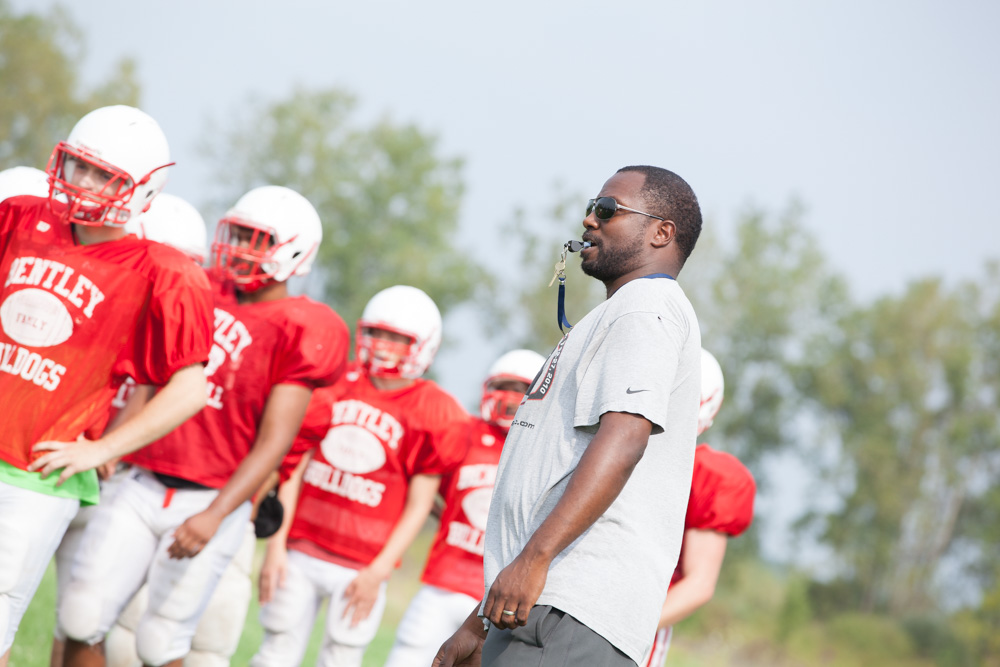 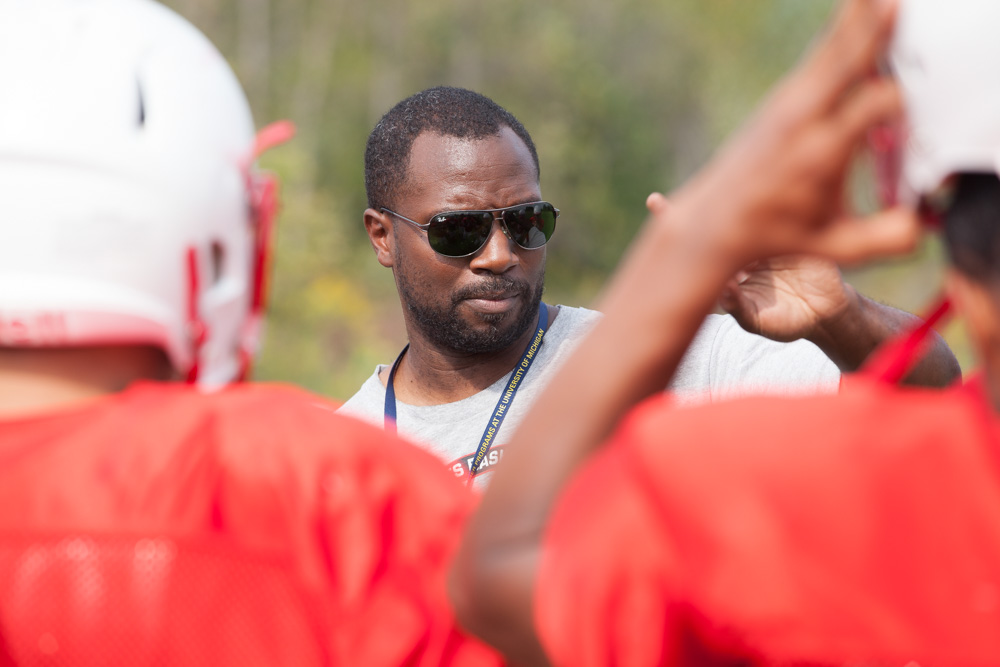 That will take time, however. The Bulldogs lost their first two games of the season, which began last month. “The entire goal for the first year is to get better with each game,” Andre says. “We are stressing things, like paying attention to every drill in practice and every play we run. We tell the guys to focus on making the next play their best play. Of course, helping the players grow as young men is a major part of what we do, as well. That’s important to all the coaches at Bentley.”

Possessing the temperament needed to guide high school athletes is crucial, says Jeremy, who won league, district, and regional championships as a boys’ basketball coach at Bentley, Swartz Creek and Powers Catholic. “Andre is a fierce competitor who will teach our kids how to compete, and is very confident, but humble and very patient,” he says. “His best quality is that he knows how to communicate with our kids. He can and will hold them accountable, but also understands that there is a time to put your arm around a kid and boost them up when they are down.”

Andre has also benefited from playing under four coaches who have either won national championships or taken teams to Super Bowls, including Lloyd Carr at Michigan and Jim Fassel with the New York Giants. Fassel’s staff also included Sean Payton and John Fox, who later took other teams to Super Bowls as head coaches.

“The crazy thing about playing for all those great coaches is how none of them are the same when it comes to how they run a team,” Andre says. “They are all very successful, but they all have used different methods and different approaches to the game to achieve that success. They all came into their own as coaches and I intend to do the same thing.”

At the University of Michigan, Andre was an important member of the national championship team, forming one of the nation’s top cornerback duos with Heisman Trophy winner, Charles Woodson. He returned an interception for the winning touchdown against Ohio State that year, preserving the Wolverines’ perfect record. In addition, Andre delivered a key quarterback sack in Michigan’s Rose Bowl win over Washington State and was named to the All-Big Ten second team. He was again named All-Big Ten second team the next season as a senior, and finished his college career with 84 tackles and five interceptions.

“Winning the national championship and returning that interception against Ohio State are the two big highlights of my college career,” Andre says. “As a player at any level, you work hard in hopes of winning a championship, and we did it.”

Andre played in nine games his rookie year; just over a year later, he suffered a knee injury that eventually ended his NFL career. He was forced to watch the Super Bowl from the sideline. 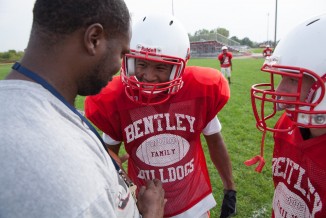 After taking time to find himself following the premature end of his playing career, Andre returned to Flint on a permanent basis in 2005 and began a very unplanned coaching career when Fred Jackson Jr., his former Central teammate, heard Andre was back in town.“Coaching was the last thing on my mind then, but one day Fred called me and asked if I’d be willing help out with the team he was coaching, Longfellow Middle School [in Flint],” Andre says. “I agreed to it and soon became addicted to helping kids grow on the football field and beyond that.” Andre later became an assistant coach at Central and with the Genesee County Patriots semi-pro team before assisting Jackson at Northwestern.

His “addiction” has only grown with each passing season. “I plan to continue coaching as long as my love for helping kids mature and grow continues,” Andre says. “I feel I found the perfect situation at Bentley and pieces are there to get the program going in the right direction – from the administration support to dedicated players and a group of coaches working together for the good of the athletes.”

“I feel I found the perfect situation at Bentley and pieces are there to get the program going in the right direction.”