Making music, to John Hill, is as easy as breathing. “It’s something that’s part of me,” he shares, like talking about music is just as important as performing it.

John Hill attended Central Michigan University where he earned his bachelor’s degree in Music Education. He graduated in 1993 with a teaching certificate. Marrying right away to his wife, Jody, he first began teaching at Muskegon High School and Steel Middle School. At that time, keeping his teaching certificate required taking graduate credits, so over the course of the next ten years, he fulfilled those credits to earn a master’s degree in Music Performance, right around the time their first child was born.

Hill grew up in Plymouth, MI and his passion for music started well before he actually began playing it. Though he claims the musical climate of Plymouth was “amazing,” one of his teachers, Jim Griffith, had made quite a lasting impression. “He made it look easy, and I thought ‘Hey, I could do that!’ So that’s why I went into music education,” Hill says.

The reason he began playing percussion is because he could teach himself. He admits, “Music was really the only thing I ever thought I was good at.” He would listen to different songs, tapping along with the rhythms. When he was in fifth grade, his father’s friend found an old drum set at a swap meet. “They’re car guys, but somehow ended up finding a pair of drums,” he says. “They gave me a drum and a book, and I taught myself how to read rhythms.” Although he had only a few lessons, once he started sixth grade, he believed he had an aptitude for it. His natural talent was developed by constantly listening and drumming to other bands’ music. “I listened to The Beatles twenty-four, seven, and so I just started with wanting to be Ringo Starr,” he smiles.

While growing up, there was always music around his house. Casually tapping the opening beat to Pink Floyd’s “Another Brick in the Wall,” Hill admits that it was the first drum beat he learned. Along with the rock-and-roll influence, his father’s jazz records also resonate within his musical ear. Artists like Stan Kenton and Maynard Ferguson were among those he heard as a child, lying in his bed at night and listening to his father play records on his stereo. 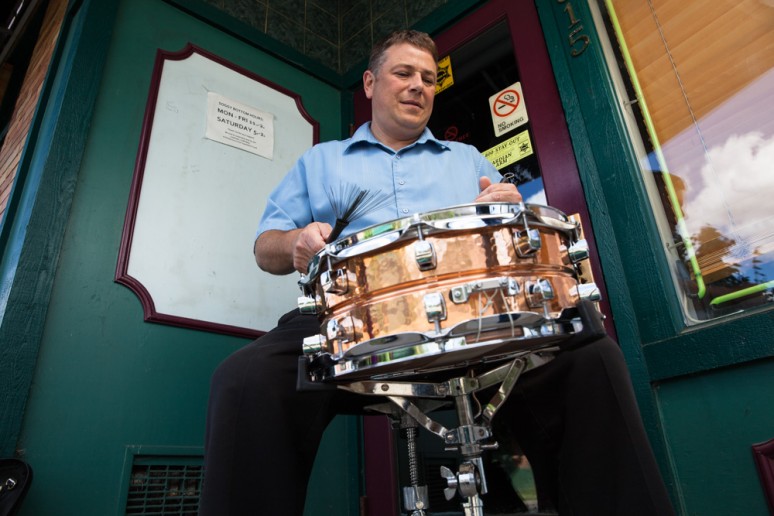 From eighth grade until he graduated high school, he played in a rock band called “The New Trend.” The band once opened for Mitch Ryder & the Detroit Wheels at a Detroit club, sometimes played back-up for Christian Rock singers, and performed at an Anti-Drug Rally at the Pontiac Silverdome. “I’m still close friends with the band members, so that’s really cool,” he says. Some of the band members took off for Los Angeles, but it is certainly evident that living presently and deliberately in these melodic moments is more important to Hill than fame; he had a different plan, and a humble one at that. “I just wanted to become a better musician,” he says. “I wasn’t interested in the ‘fame’ thing. I wanted to learn as much about music as I could.”

After graduating high school in 1987, Hill played in live bands at Cedar Point in Sandusky, OH. The musicians were all music majors from universities in Michigan and Ohio. During his two summers there, the park attractions he played at included Lusty Lil’s with the Show Stoppers, and the Dixieland Band at the Red Garter Saloon. His roommate there, a guitarist, inspired him to listen to more jazz by scatting every note from a Wynton Marsalis album. Hill recalls, “I was so impressed that I went out and bought (with my dad’s credit card) a Miles Davis CD box set. That moment started my fascination with jazz.”

Hill and his wife found themselves in Flint in order to be near his parents who live in Plymouth, and his in-laws in Saginaw. He explained that his previous position at Muskegon consumed much of his time: “It was a great school district, but I was there 15 hours a day, and I wanted just a little smaller job. I needed a change in my professional life.” He found that change through a teaching position in Holly, where he stayed for 15 years. For the past two years, he has taught and directed the jazz band at Oxford High School.

Oxford High School is an International Baccalaureate school, providing Hill with the variety and diversity he craves. He now teaches guitar classes, music theory and music appreciation. Although Oxford is a large school, the classes are small and “close-knit,” which Hill loves. Because Oxford is an IB school, it has allowed him to study music from all over the world, which has continued to feed his musical addiction. “It inspires me to learn more about music,” he says.

When he’s not teaching, Hill performs all over Michigan, his motivation fueled by the adrenalin rush of performing. “Being a musician is very addictive to me – the performance aspect. I get to play with different musicians every week in different places,” he says. One such place is Crossroads Village, where he performed outdoors with the Flint Symphony Orchestra. “It was very well-attended and a beautiful night,” he says. In July, Hill and The Third Coast steel drum band played in Lansing at Taste of Downtown, a summer food and wine festival. Also in July, he played in Grand Rapids with the International Trumpet Guild with three trumpet players from different parts of the country. “We all smile at each other and encourage each other, which makes music-making fun. There are virtuosos everywhere,” Hill claims. “I love doing what I do because I run into great musicians all the time.”

The improvisation, the liveness of it, drives Hill to become a better musician. Jazz is a very spontaneous genre, and practicing makes him better at improvising while playing with other musicians. Part of playing jazz, he explained, is connecting with the other musicians, and watching and responding to their variations. “It could be any piece of music. It could be orchestral, jazz, it could be rock and roll … it could be ‘Three Blind Mice’, but it can be played in a way that is very inspirational. It’s not the songs – it’s the musicians you’re playing with who make music the most fun.” To continue his growth, his short-term career goal is to become a better improviser – a necessity for jazz musicians. 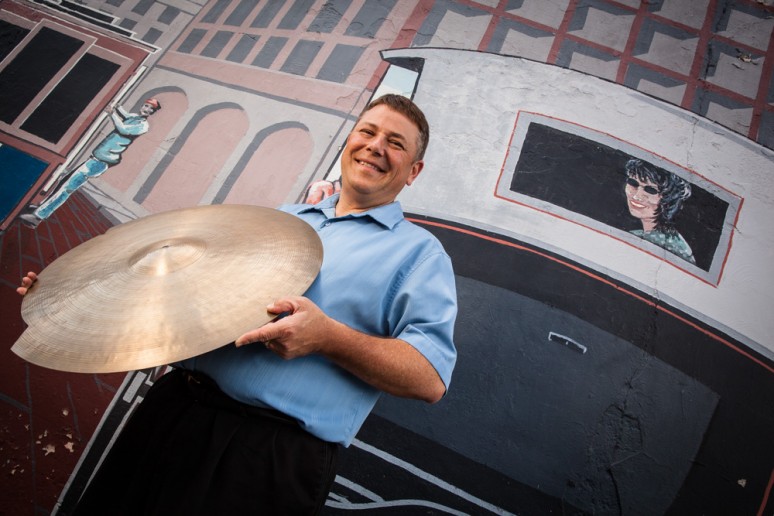 “I just wanted to become a better musician. I wasn’t interested in the ‘fame’ thing. I wanted to learn as much about music as I could.”

Part of improvisation is internalizing and memorizing certain possibilities within a song; he is always tuning his ear to the music in order to make the experience clearer and more enjoyable for the listener. “Especially playing in Flint at the Soggy Bottom Bar,” he describes, “there is this response from the audience.” It’s the musician’s job to “create a mood” for the audience that they can respond to, a skill that Hill is constantly stretching to improve. “You’re taking on a musical persona,” he explains, “then, you have to emote those musical ideas in a spontaneous, reactive way. It’s very challenging, but I hope it’s good for my mind.”

Much like keeping each song sharp and swanky, Hill refuses to be complacent with his constant music-making. “I love the variety of music I get to play and the variety of musicians I run into!” he exclaims. “It’s very addicting. If I was in just one band, playing the same songs over and over again, I don’t know how much fun that would be.” In spite of this belief, Hill has begun playing in more regular situations, like his weekly gig at Soggy Bottom, where he plays every Tuesday night at 7pm.

Each time, it is a new experience. “That’s the great thing about getting different musicians together to see what happens. That’s the great thing about jazz, too – it’s not so cut and dried. If you play a rock and roll song like it’s right off the radio, it’s going to be pretty much the same every time, but jazz … you can play the same tune and every time it will be different, especially when you mix different musicians together. Sometimes it doesn’t turn out the greatest, but sometimes it ends up being magic.”

Other than “magic,” the word Hill continually used to describe his affinity for music is “addiction.” He continues chasing the feeling of performing and wants to “keep his chops up.” “Really it’s a survival thing,” he explains. “I want to be good enough to be called to play more gigs. I enjoy practicing. It’s almost like meditation to me. It’s not work.”

Hill also enjoys teaching at different jazz camps in communities all around Michigan. Just this summer, he taught at Cranbrook Institute for the first time. “The only instruction I had was that the music I taught could have no printed sheet music. Everything had to be by rote. That was fascinating.” Without knowing the middle school students’ skill levels, he still had to come in with a plan and be ready to teach them. 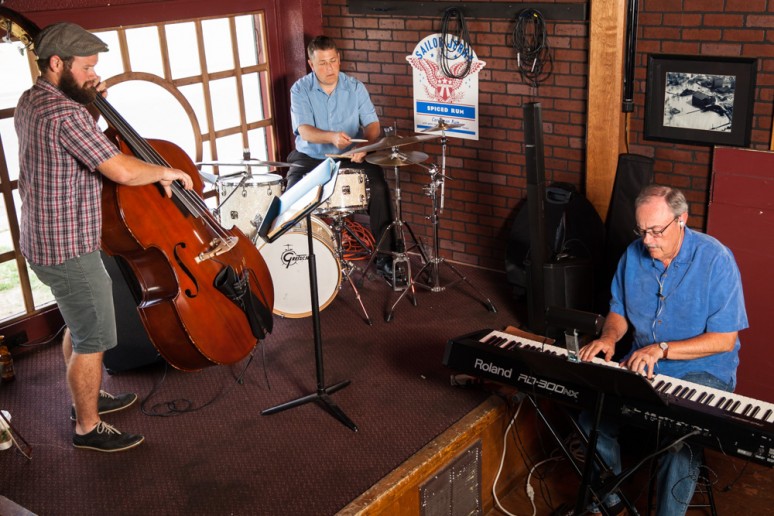 Another first-time camp this summer was at Oakland University, with the Metro Detroit Jazz Workshop. Hill was one of many instructors who taught 80 students of ages ranging from middle school and college students, to people in their nineties. “It was awesome seeing such a variety of musicians,” he says. The most recent camp was not specifically for jazz; it was a percussion camp at Alma College, where Hill has taught for many years.

These camps are not his first encounters with younger musicians. The Hills have four children: Gretchen, Johnny, Anna, and Andrew. Even though they do not play music together, his older children are also musically inclined, and Hill coaches them when they need it. His oldest daughter, for example, plays the clarinet and will major in music at school in the fall. “We encourage each other,” he smiles.

As for a long-term goal, Hill just wants to continue playing. He explains: “As you get older, your body moves differently, and your knees feel a certain way, so it’s just a matter of staying healthy enough to play.”

Ending on an altruistic note, Hill’s advice to young musicians is, “always do it because you enjoy it. Music is tough enough even if you love it. It’s not an easy life. It should always be part of you, but that doesn’t mean you have to do it for a living.”

In the meantime, Hill will continue finding a gratifying balance and harmony in his life as a husband, father and musician. Despite all of his success, what he is most proud of is keeping his family in tact throughout his career. “My wife, Jody, has been very supportive,” Hill says, “and she knows music has always been my passion. I am a much better musician because I have a family, and because I’ve taught. Teaching has helped my musicianship and working with people. I’m lucky to have been able to do it all.”