The Honorable Judge Mark C. McCabe, who presides over the 67th District Court Fourth Division in Fenton, was appointed to the bench in 1993 by Governor John Engler. Sworn in on February 11, 1993 he has continuously served as a judge in Fenton and at the Central Court in Downtown Flint for 29 years. “It’s amazing how quickly time has gone by,” he shares with a smile. McCabe will continue to serve as a judge until 2026 when his current term expires, but cannot run for re-election as he is age-limited.

McCabe was born in Detroit and grew up in Oakland County, attending University of Detroit High School. Originally wanting to become a teacher, he obtained his undergraduate degree in education at University of Michigan-Ann Arbor. “But then, I decided to go to law school and never looked back.” He went on to earn his Juris Doctor at Wayne State University and ended up in Flint after being chosen to be a clerk for an attorney in the area. “He recruited me while I was in law school,” McCabe remembers. On November 9, 1976 he was sworn in and then started practicing law. “This was the first time I set foot in Flint,” says McCabe. “I knew nothing about the city, but have never regretted a second of practicing here.”

What types of cases are heard by a 67th District Court judge? According to McCabe, they have jurisdiction over all misdemeanors and criminal cases that carry a sentence of less than one year in the county jail. District judges also hear preliminary examinations in felony matters. In addition, they can hear felony pleas, but the matter is then sent to Circuit Court for sentencing.

New legislation was implemented that gave District Court judges jurisdiction over municipal and state civil infractions, McCabe explains. These are matters that involve zoning issues, trespassing, or failure to keep property up to standard. Previously, these types of cases were handled in Circuit Court and a lawsuit had to be filed. Flint Senator Joe Conroy played a key role in changing the legislation. “He really championed that,” McCabe notes. District Court judges handle traffic and landlord/tenant cases, civil lawsuits that are $25,000 or less, and small claims matters. They are also on call 24 hours a day to issue search warrants for law enforcement. 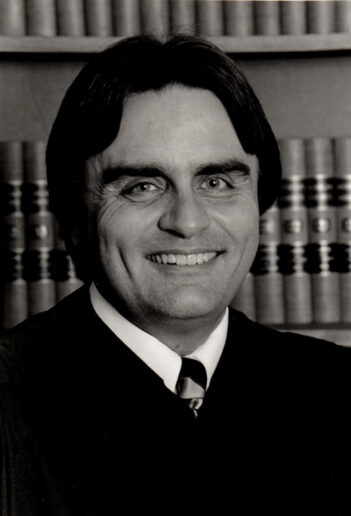 “Nobody is having a good day when they are coming to court. People are nervous and I have to focus on that and be patient. And at the end of the day, I try to treat people fairly.”

McCabe was inspired by former Genesee County Circuit Court Judge Thomas Yeotis. “Judge Yeotis was everything a judge should be,” McCabe states. “I try to live up to what he taught me every day.” Nobody is having a good day when they are coming to court, Yeotis would tell him. “People are nervous and I have to focus on that and be patient. And at the end of the day, I try to treat people fairly.” He also says that nobody is perfect and, of course, mistakes can be made. “But if I do my best, I can look at myself in the mirror and say I had a good day.”

One of the things McCabe especially enjoys doing is writing a weekly legal column for Fenton’s local newspaper, the Tri-County Times, which he has done since 1998. “I’ve written a column every week and it will be 24 years in September,” he shares. “It’s been a labor of love. I love to write and I love to do research and there are so many things I can write about the law.”

While the judge spends most of his time at the Fenton court house, about 40 percent of his time is spent in Downtown Flint hearing cases in the Central Court. He has enjoyed seeing the positive changes that have occurred in the city over the past few years. “Flint has had its issues,” he admits, “but there is hope. Downtown is being revitalized and there are many wonderful people working together to make that happen.”

He also marvels at the changes that have taken place in the City of Fenton since he first sat on the bench back in 1993. “There has been so much growth!” he exclaims, “And, there is no end in sight.”

McCabe was married to his wife, Janet, for many years and they had a daughter Heather, who is now grown and living on the East Coast. Janet passed away in October 2020. “She was the love of my life,” he sadly admits. “I still miss her.”

At the end of his busy days, McCabe finds time to spend with family members, including his three brothers. “We are all very close,” he shares. He tries to stay active and enjoys playing golf, attending sporting events and traveling out east to visit his daughter and her family.

According to McCabe, there are two words that describe his nearly 30-year career as a judge. “It’s an honor and a privilege,” he says. “It’s that simple. I keep those words in mind both on and off the bench and that is the way I handle my cases.”

McCabe feels fortunate to have been appointed to his judgeship and re-elected. “I am very honored and privileged to be a judge,” he shares. “I enjoy every day and try to do my level best every day. I love my job.”