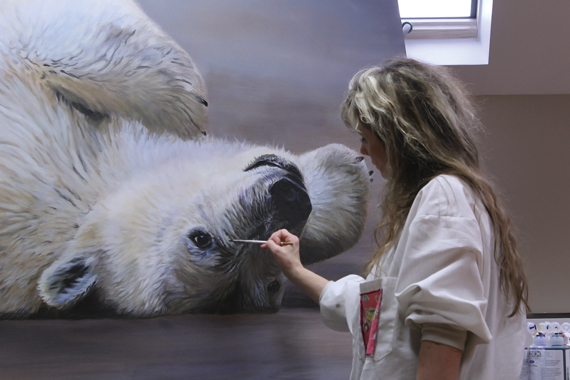 For one well-established local artist, inspiration for her widely popular work comes to fruition in a studio located above a Flint veterinary clinic. Anni Crouter was born into a family originally from Chicago, her father a veterinarian who moved his family and practice to Swartz Creek when she was three years old. Growing up surrounded by animals and idolizing her father’s example, Crouter longed to become a veterinarian as well; however, the road to veterinary school proved difficult to travel. She lightheartedly remembers, “I wanted to be a vet in the worst way, but my math and science skills were lacking.”

Crouter’s professed lack of aptitude would ultimately lead her toward other opportunities, allowing her to have the best of both worlds, for along with her fondness for animals was a growing interest and adept skill in the arts. Her parents nurtured her talents, so Anni began focusing on art while working as a pet groomer in her father’s clinic. She attended Mott Community College to earn a business degree and it was during her studies at Mott that she first began formal training in painting. After college and nearly 20 years ago now, Crouter began to study watercolors at the Flint Institute of Arts under renowned watercolor artist Jim Ames, AWS – the man whom she now credits with having the greatest impact on her. “He was a major supporter of my work,” says Crouter of her mentor.

As Anni honed her technique under Ames’ direction, his confidence in her talent grew. He encouraged her to graduate from the “art fair scene” and into permanent displays and museums. In the late 90s, she began showcasing her work locally at Fandangles’ restaurant in Flushing. Today, Crouter says she is grateful to Fandangles’ for displaying her work, and the restaurant remains among her biggest and most vocal supporters. Speaking to the eclectic eatery’s role in her success, Crouter says, “I try to get my work outside of Michigan by being a part of exhibitions, and I’m able to do that because I have a really solid collection base, thanks to the support of Fandangles’.”

By the middle part of the last decade, Crouter’s work was becoming more popular in artist circles. She joined the Society of Animal Artists in 2005, which she says is about the time her career “really began to take off.” She became a signature member of the International Society of Acrylic Painters and the Northwest Watercolor Society. Calling on the physical aid of her husband and ardent supporter, Dr. Nathan Boggs, who practices veterinary medicine, Crouter is always packing up and shipping off work that has been recently purchased or is slated for display at a number of national venues. Her work is in high demand, which keeps her busy with numerous paintings at a time. “I usually work on 10-15 pieces simultaneously,” she says. “When I get tired of working on one, I do another.” Crouter’s media of choice are watercolor, gouache and acrylic.

Such exertion is typical of an artist who is growing in popularity, and chances are that the demand will increase in the near future. Most recently, Crouter was awarded the second place prize in the renowned Art Prize competition of Grand Rapids, MI. The honor brought with it a $75,000 cash award and publicity like no other, which is not hyperbole. The federal government entered its partial shutdown during this year’s Art Prize, thus closing the venue where Crouter’s art was on display, but this turned out to be the old blessing in disguise. The shutdown drew more media attention to the artists who were forced to display their art outside, and Crouter subsequently gave interviews to local and national stations, including NPR. “It was the perfect storm,” she says. “People who didn’t know of the Art Prize in Michigan now know of it. My girlfriends in California were even listening to my interview on the radio!”

Concerning her work at Art Prize, Crouter says that competitors know to “go big or go home.” With this in mind, Anni decided that the wisest way to go about gaining mass appeal would be to paint something that the public liked, even if she risked alienating professional critics. Her presentation of choice: “Three extraordinarily done bears.” Crouter painted these, and other animals, from photographs that either she or a colleague has taken. Wildlife painting does not usually appeal to critics, but Crouter wanted to play to the people. She says,

I didn’t want to make some huge political statement. I just wanted to make people smile. I wanted it to be pleasant to look at; life is hard enough. Three extraordinarily done bears, and that’s all they are. People don’t want to think about it, they just want the art, and they need art. Math and science are great, and they probably make you more money, and perhaps you’ll be happier, but we need art. It makes us better-rounded people. We cannot forget how to write a letter and read a book, but we also cannot forget what’s wild outside.

While appreciating every laurel she gains, Crouter longs above all to have the credential AWS, American Watercolor Society, affixed to her name. To be a member of the AWS is to be accepted into the privy council of watercolor painters; an immortal in the academy of artists. “I want the same signature my teacher has,” Crouter asserts. She has submitted her work two times already to no avail, but perhaps the third time is a charm, considering that she may offer two pieces instead of just one on her third attempt. Perhaps still, Anni’s most recent laurel at Art Prize will serve as the coup de grace, making clear her noted talent to this esoteric and elusive band of artists. Only time will tell. For now, the joy evident in the exquisite works of Anni Crouter makes all of Flint proud to claim this ambitious artist as our own.

Are you interested in purchasing photos from this story? Go HERE and select the “Anni Crouter” category.