As we have watched Vehicle City undergo revitalization over the last several years, General Motors has also been going through a transformation – and a good one – especially at Flint Assembly, which is the oldest GM assembly plant in North America, having opened in 1947. Going from bankruptcy a few years back to a company investment of $1.8 billion since 2011, Flint Assembly is proof that Flint is still in the business of making cars and trucks – and auto workers have a secure future here. The most recent investment of $877 million was announced last month and will be used to build a new body shop for the assembly plant, locating it closer to the Flint Metal Center. 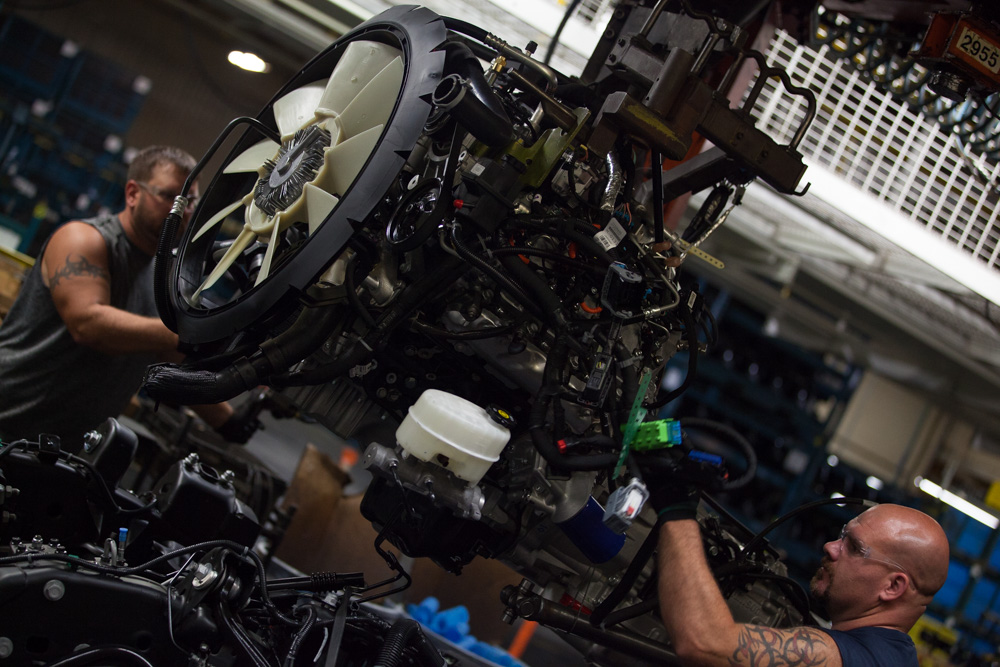 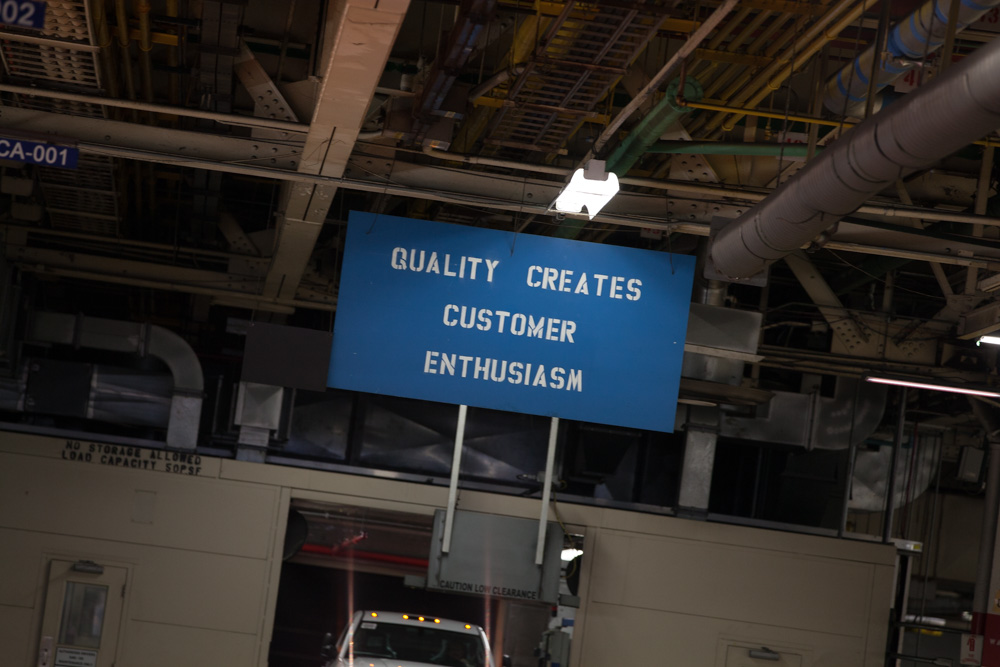 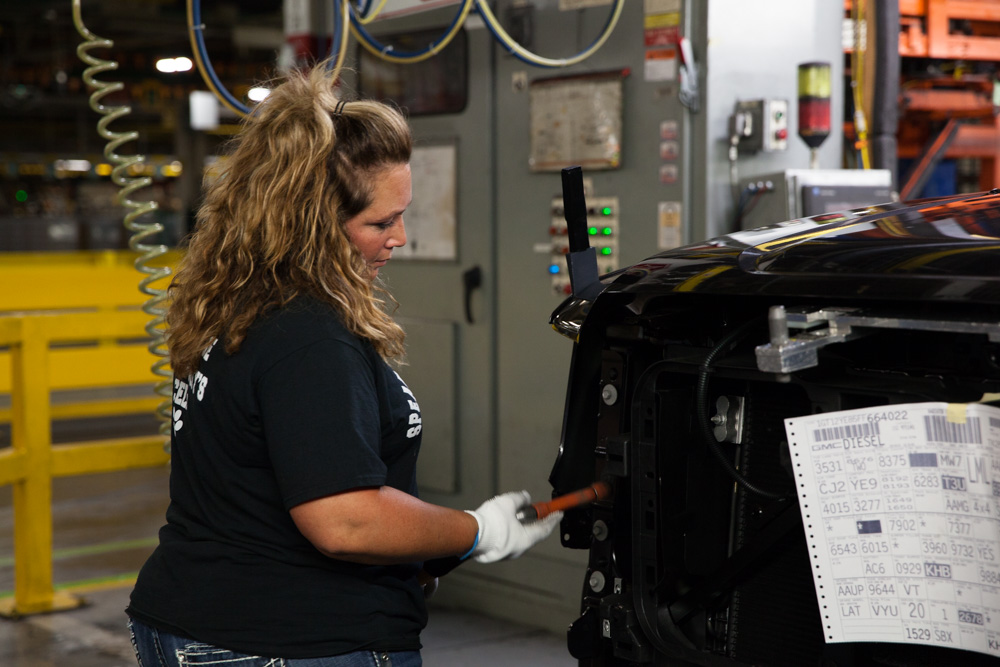 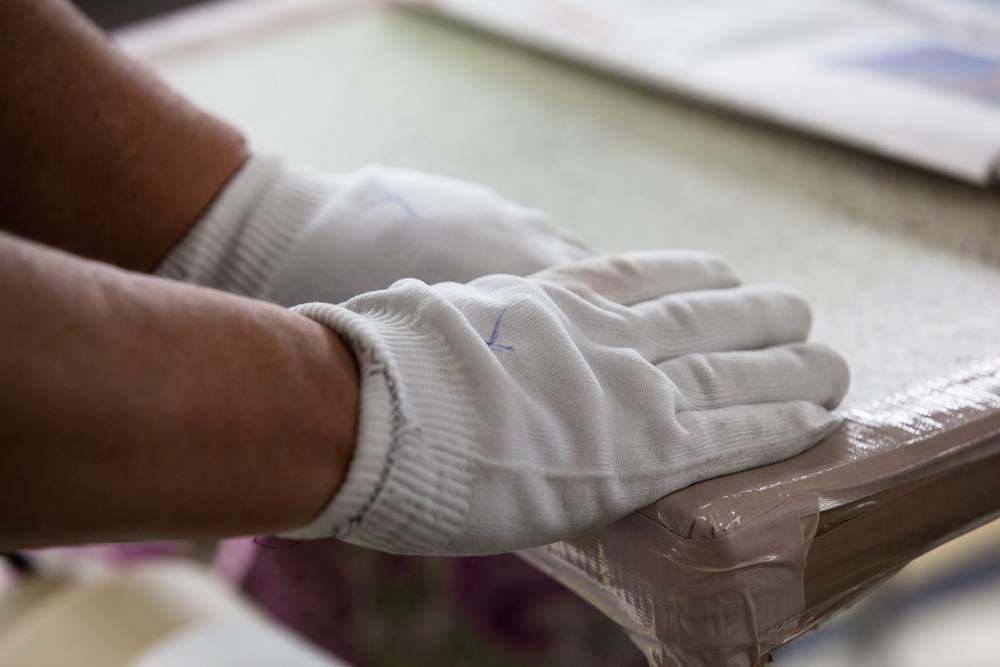 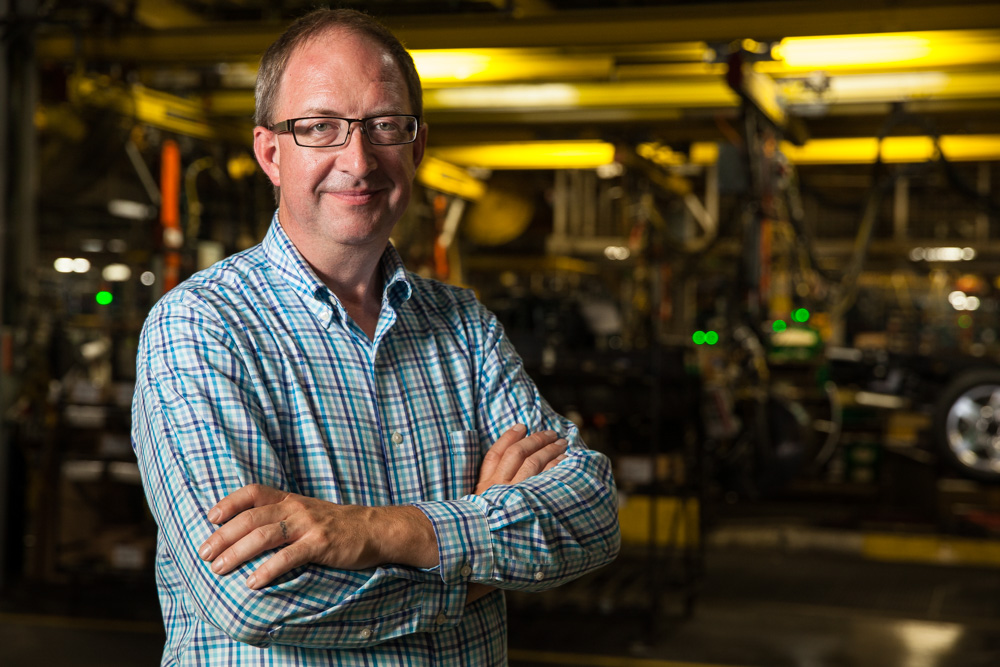 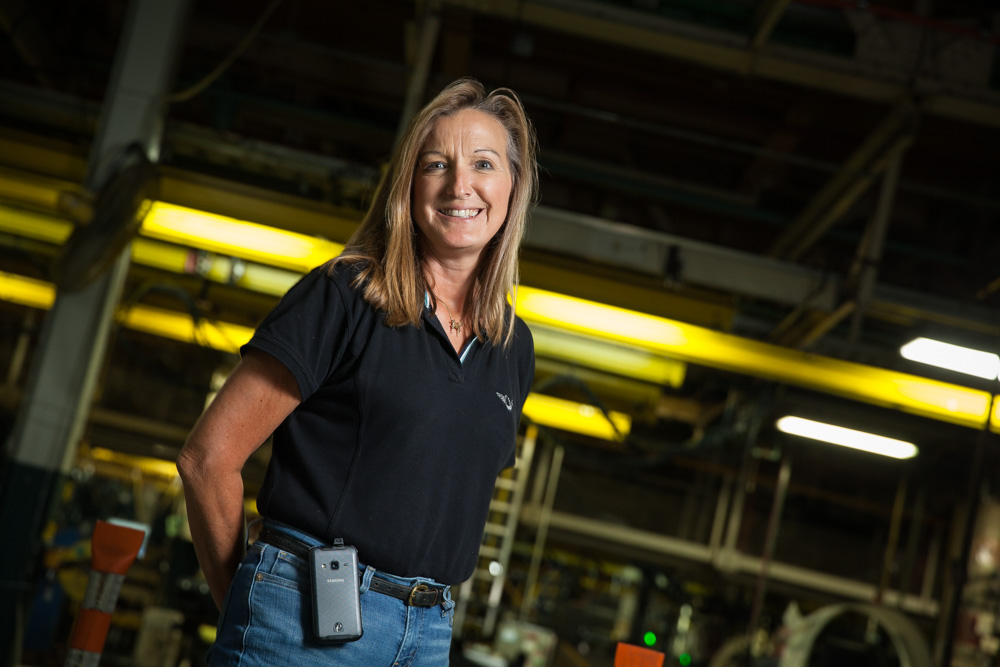 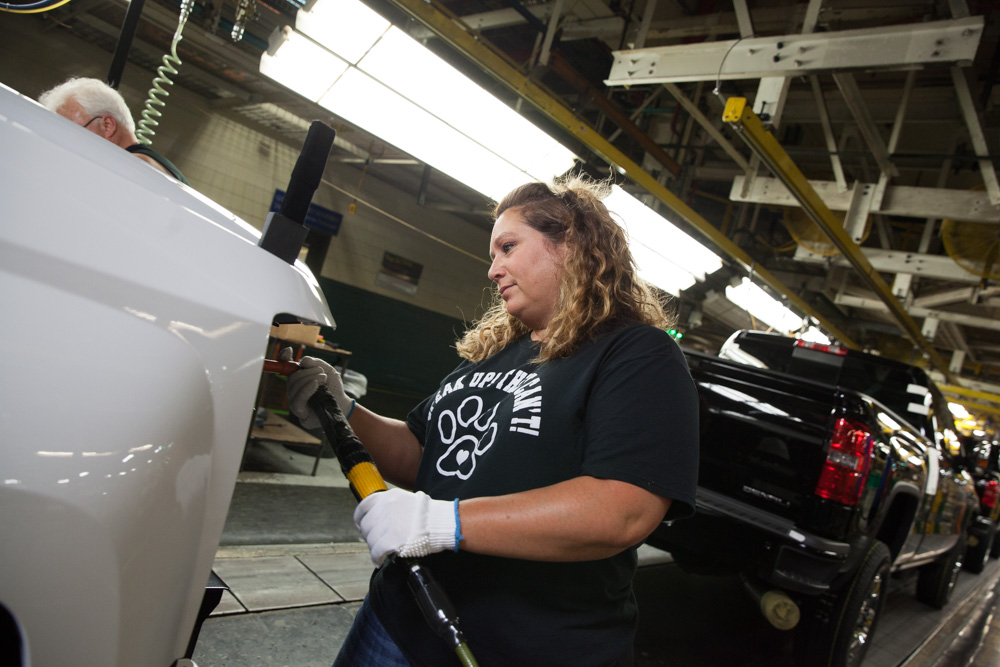 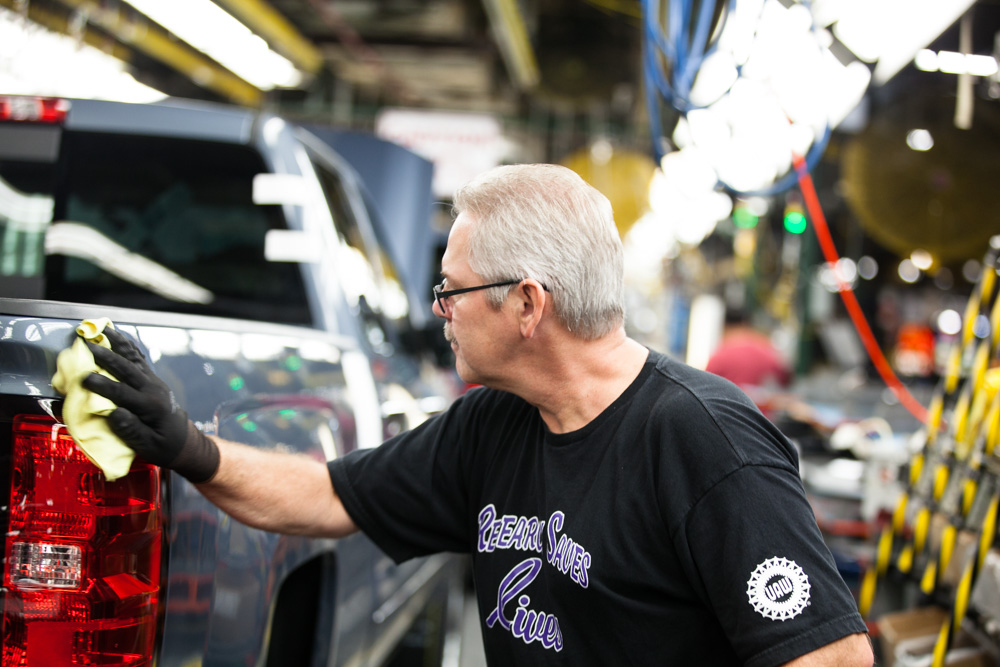 Investments have been gained due to the concerted effort of both GM and the UAW. “We, as a workforce, had to fight to continue to build vehicles here, and a lot of hard work went into it,” says UAW Local 598 Shop Committeeman, Eric Welter. “We are very blessed to have GM invest here.” And much of the success is due to the GM/UAW joint effort. According to Tom Wickham, GM Flint Communications, a lot has been done to dispel the myth about labor relations. He says the Union drove many of the changes in Flint, and input from the workers themselves has helped to create a more efficient plant; this wasn’t always the case. “UAW/GM relations have improved dramatically,” says Tom. “There is not a decision made in which we don’t work together.” Workers are far more empowered to share their ideas. “The culture of the workforce has been transformed.”

So, what is a typical day in the life of a factory worker like? According to Eric, Flint Assembly employs 2,820 people. Skilled Trades include electricians, pipefitters, millwrights and tool makers, who make sure the equipment on the line is running smoothly. There are many layers of employees – team leaders, supervisors, assembly line staff – who work together to produce a quality product. He compares a day in a factory worker’s life to the movie, Groundhog Day, repeating the same day over and over. My City Magazine caught up with Amira Lovejoy, a hood-fitter who has worked for GM for 20 years. She has been at Flint Assembly since 1999 and while most of the work is repetitive, she says she is never bored. “There is too much going on and there are too many good people here,” she smiles. “And there is always music playing.”

Amira gets up to start her day. She lives in Corunna with her husband, Dwight, and their three children. She arrives at work on the assembly line at 7am and relieves the third-shift employee. The plant operates 24 hours a day in three shifts, 7am-3pm, 3pm-11pm and 11pm-7am. “The line never stops,” says Robin Stayton-Diehl, UAW Communications, “with the exception of break time and lunch.” It was a hot, humid day on our visit and the plant is not air conditioned, but stays fairly comfortable with large fans cooling the air. “Thank God for our fans,” laughs Amira.

Amira is responsible for fitting the truck hood to the fender, using a measuring tool to make sure the gaps are equal. There is a co-worker on the other side of the line who performing the same task, and Amira says that communication is key. “I have great co-workers,” she says. “We get the job done, but we also tell jokes and talk about our families while we do it.” 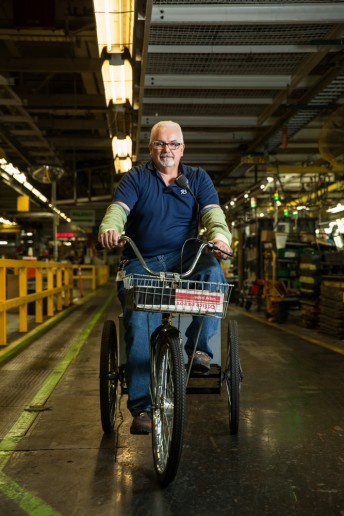 The workers take a break. They have a chance to fill their coffee cups, relax for a moment, or hold a quick team meeting. Amira says they don’t usually leave their work area during break times.

It’s lunchtime. There is no cafeteria at the plant – Amira says the workers typically bring their own lunches and since the allocated time is just 30 minutes, they don’t usually leave the building. “On Fridays, we usually order something for lunch,” she says.

The first shift ends for the Flint Assembly workers. “My day is just beginning,” Amira says, laughing. In addition to working at Flint Assembly, she is an active volunteer at Genesee County Animal Control, and her kids are very involved in sports. Dinner is usually consumed on the road between sporting events. “I’m either watching a game in a gym or on a baseball field,” she says.

At the end of the shift, an average of 230-240 new vehicles have rolled off the line, reports Robin Stayton-Diehl. In a 24-hour day, the plant builds an average of 720 trucks. Some of the vehicles that will be shipped overseas have been fitted with covers to protect them from the elements during transit.

In her two decades as a GM employee, Amira has seen many changes. As the workforce dwindled, the workload has increased. “The jobs are more intense,” she says, “and there isn’t time to sit down.” Tom Wickham agrees. The era of the public-perceived “lazy shop worker” is long gone. “The workforce now sees the importance of putting out a quality vehicle,” Tom adds, “and they feel a sense of pride in the trucks they have helped to build.” Flint Assembly has won many awards, including the Motor Trend Truck of the year in 2011, and three J.D. Power & Associates quality awards this year.

Amira has nine more years to work before she can retire. “I look forward to retiring from Flint Assembly. My job has been very rewarding. I feel a lot of pride and sense of accomplishment,” she says. “And I have the three best kids in the world. I can’t ask for anything more.” 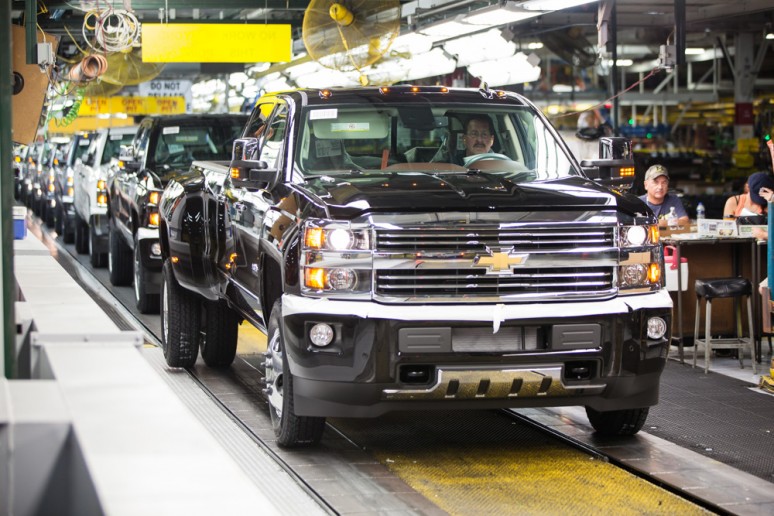 When it comes to providing jobs in the area, manufacturing is still on top. “GM is still the largest manufacturer in Genesee County with 7,200 employees,” says Tim Herman, CEO of the Flint & Genesee Chamber of Commerce. “The company is committed to investing and providing employment in the region.” And this has a broad impact and an economic multiplying effect. According to Tim, each job supports more than two additional jobs in Genesee County in fields such as health care, retail, professional services and government, to name a few. The $651 million in earnings are spent right here in the county on housing, education, transportation, restaurants, groceries and entertainment.

When one thinks of manufacturing in this area, auto production is the first thing that comes to mind. According to Tim, there are over 300 other manufacturing companies in the area that employ approximately 17,000 people. A coalition was formed by several manufacturing companies with the purpose of securing job-driven resources for training programs. Coalition members include Accu Shape Die Cutting, Android Industries, Automation Movers International, General Motors, Genesee Packaging, Koegel Meats, Landaal Packaging Systems, MacArthur Corporation, Northgate, Signs by Crannie, TGI Direct, The Coffee Beanery and TMI Climate Solutions. The Flint & Genesee Manufacturing Coalition has partnered with the Chamber with a goal to expand the talent pool. “Manufacturing firms are in the hiring mode, says Tim, “and there is a need for talent and people with technical skills.”

For the second year, the coalition is planning a Manufacturing Day observance, which will be celebrated this year on October 2. The goal of the event is to help people learn more about training and career opportunities in the field of manufacturing. The companies are encouraged to host open houses and special events. “Manufacturing is very important to Genesee County,” says Tim. “It represents well over 25,000 people.”