When My City sat down with Amie Burke, 36, she wore a T-shirt that reads, “Weird But Nice.” We quickly found out that this creative, fun and energetic radio deejay fit that description to a T. Burke plays on the Bath City Roller Girls team, is an instructor at Sailor’s Mouth Yoga, a Detroit School of Burlesque graduate and performer, a comic book reviewer at Slackjaw Punks and a vintage clothing collector. She lives life in the moment and keeps an open mind. “If an opportunity comes my way, I just roll with it,” says Burke, a Central Michigan University grad who earned a Bachelor’s Degree in Broadcast and Cinematic Arts, and can be heard on radio stations US 103.1 (classic rock) from noon to 3pm, and CARS 108 (adult contemporary) from 5-7pm. “I try to take opportunities as they come and since we only live once, why not?”

Burke first seized an opportunity to break into the radio industry at CMU, when she ran a Sunday radio show, “News Probe,” promoting newsworthy campus events. But that wasn’t her original plan. “I started out thinking I’d be a pharmacist,” she says, “but, I was lost after two weeks of advanced chemistry.” Her desire to become a deejay happened randomly after she heard a radio announcer mess up a song title and artist’s name. Burke, an MTV Baby and music trivia over-achiever, corrected the announcer in her head and thought, wait a second … I can DO this.

She followed her instincts and hasn’t regretted it. “Being on the air is super fun,” she says. “I work in an environment that promotes creativity, and I get to interact with inspiring people.” Burke spends more than 40 hours per week at Townsquare Media, a Flint digital media and radio advertising company and the home of several local radio stations. “I love how they let me fly my freak flag here,” she laughs. Early in her career, in the late 1990s, she admits being nervous in front of the microphone. “I try not to think about ratings or anything like that,” she says. “I’m my own worst critic. Eventually though, I learned to view my on-air time as a conversation with a friend.” Burke appreciates feedback from fans, and values their comments and interaction through social media. 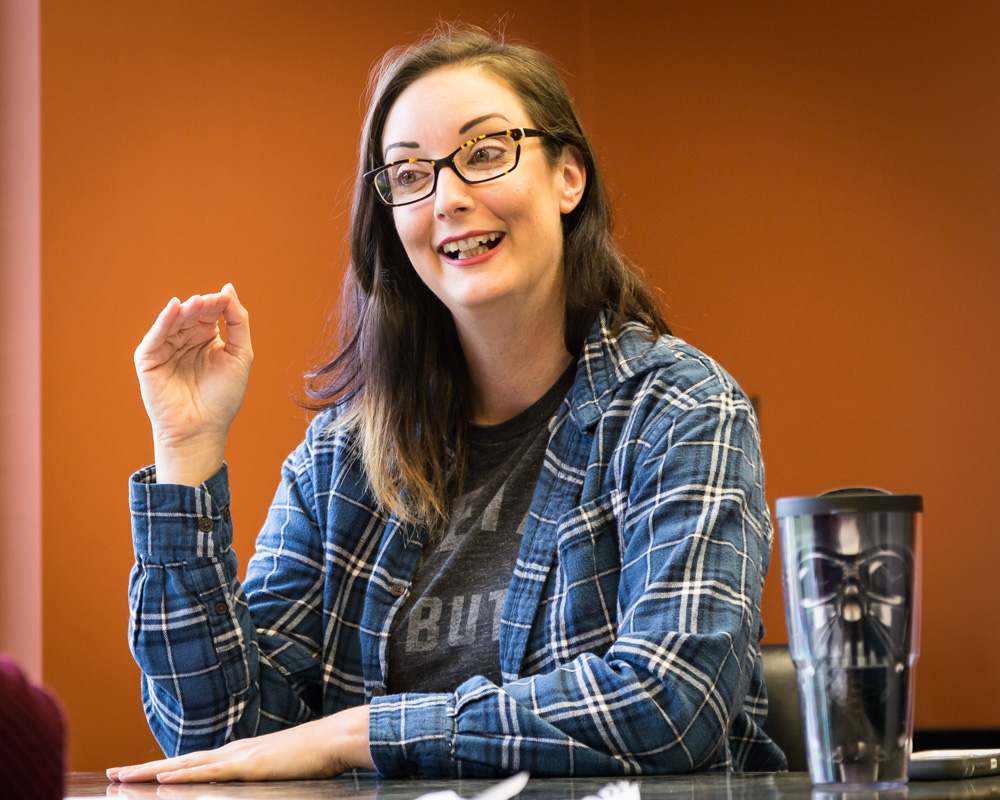 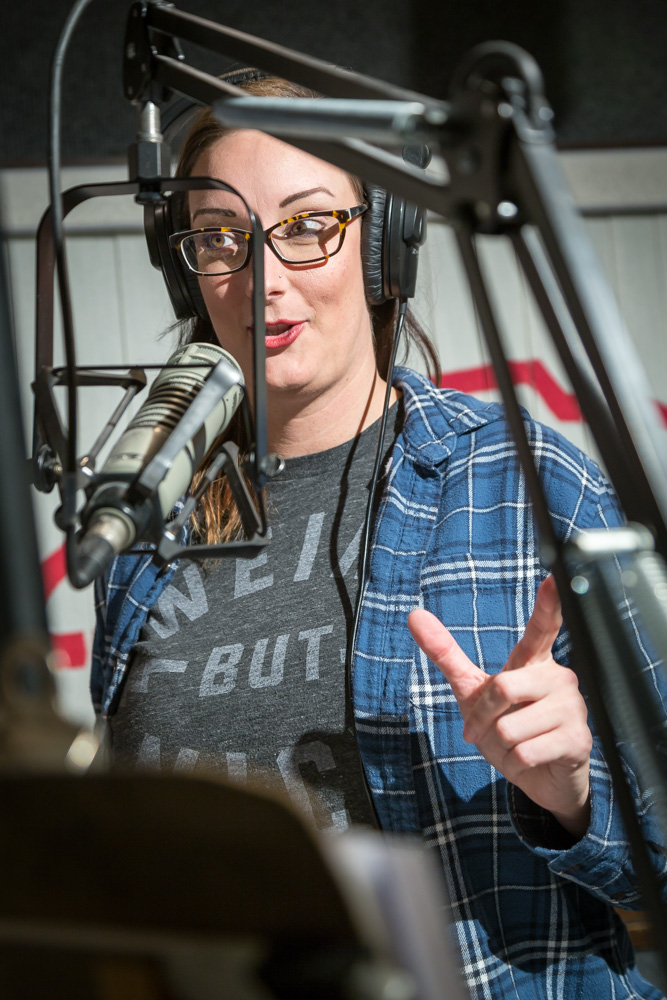 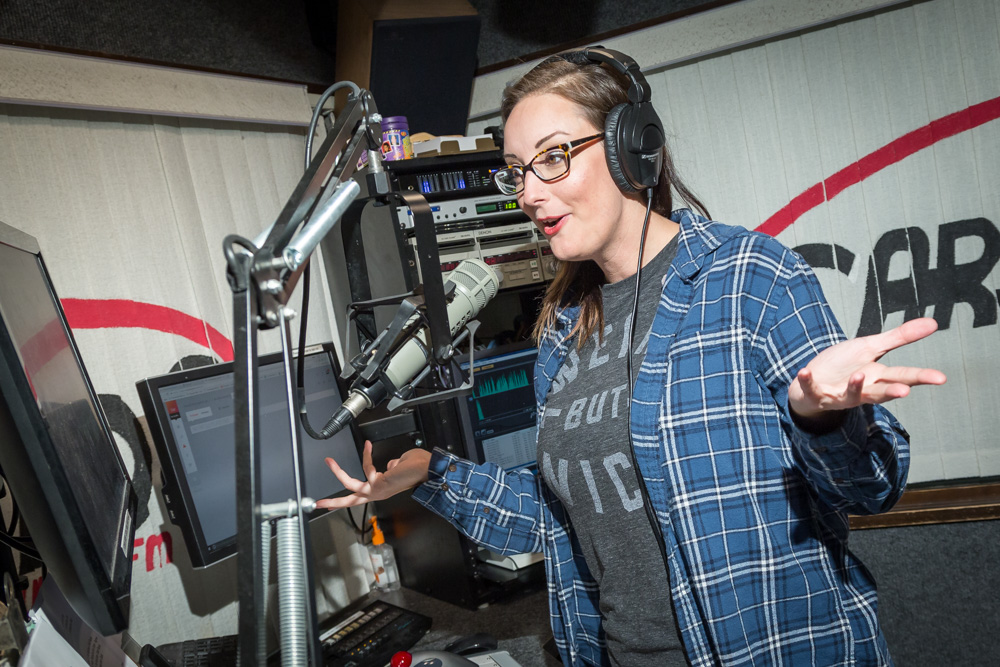 During her on-air time, she likes answering phone calls, honoring music requests and informing her audience about local news and traffic while simultaneously scanning three computer screens – one for 9-1-1, one for social media and one for breaking news. Her naturally sarcastic sense of humor is ideal for keeping her fans entertained. “I try to stay on top of everything,” she laughs. “I like to let listeners know about pop culture stuff, as well as when there’s a mattress flying on I-75, or horses loose on the roadway.” Burke wears several hats and serves as the promotions director, writes news content for both station’s websites, and manages all the social media platforms. In addition, she assists in making sure commercials, giveaway contests and other promotional events are orderly and executed to the advertisers’ satisfaction. “There’s a lot to do at a radio station besides being on the air,” she says.

When Burke isn’t at the station, she has a variety of ways to “release her weirdness,” as she says. “I’m an odd, weird chick,” she laughs, pointing to the words on her T-shirt. “I’ve got some ‘side hustles’ I really like doing.” For example, she operates Sailor’s Mouth Yoga and teaches “non-traditional” classes at area bars including The Barn in Fenton, The Point in Grand Blanc and The Loft in Lansing. Burke went to a typical yoga class and thought it was completely boring. “I designed my own yoga format,” she says. “We curse while doing yoga – it’s hilarious!” Her weird, edgy and appealing style transforms the popular “downward dog” pose into the Burke-sassy “face-down, a$$-up” version. Participants range in age from 18-60, and every class has spectators who usually return to try it themselves. “My classes are packed and it’s growing. Swearing out loud is such a tension-melting de-stressor.” 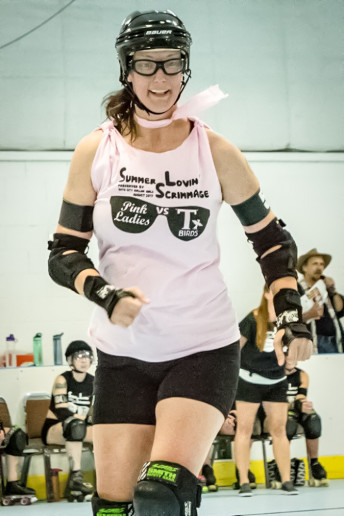 On Sundays, Wednesdays and Fridays, Burke enjoys her kind of workout – practicing and playing roller derby with the Bath City Roller Girls. 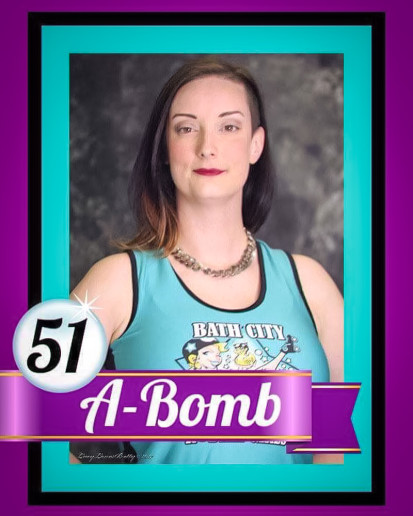 They practice at the Joe Dumars Field House in Shelby Township and compete in tournaments in Canada and Mackinaw City. She’s nicknamed “A-Bomb.”

“Hey, some people like to knit or shop or get their nails done,” she laughs. “I like to sweat and get bruises. It’s definitely a head-to-toe physical workout. I like to skate as much as possible, and I love the trash-talk and camaraderie between all of us.”

Remarkably, there is more talent Burke shares with the world. “I teach, emcee and perform on stage in burlesque and drag shows,” she says. She shops at flea markets and estate sales for vintage-style clothing. “I love wearing weird, sequined dresses and ball gowns and performing on stage at places where weirdos, like me, are welcome.”

Burke also is fascinated with comic books that have a “soap opera-horror story element.” She specializes in writing comic book reviews for the Slackjaw Punks website. “I’m a comic book nerd and I love writing about the characters and storylines,” she shares.

Whether she’s behind the microphone in the studio, wearing yoga pants or roller skates, performing as a burlesque dancer, writing comic book reviews or browsing shops for vintage items, Burke is living life her way and intentionally finds fun and meaning in whatever experience comes along. 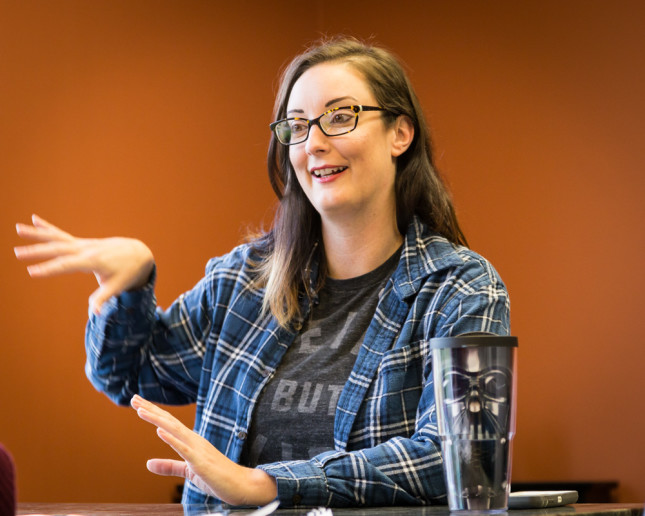 “I love being busy. I get bored easily. I’m just living life,” she says. “I thrive when I’m doing something or trying something new. When an opportunity comes my way, I’m definitely going to embrace it.”