“I treat them like my own. It’s about building trust, staying connected to their lives, being genuine and being there for them. I tell them all, ‘You control your own destiny.’”
Sam Wells

About five years ago, Austin Edelen, now 18, watched his parents go through a divorce, was flunking out of Hamady High School and had suddenly become the man of the house. He helped care for his younger brother, Avion, and even younger sister, Autumn, and worked odd jobs such as cleaning out his uncle’s shed or mowing the grass to earn extra money. “It was definitely a turning point in my life,” says Austin. “I knew I wanted to make some changes. I watched what was going on around me – people in my world, in my neighborhood, didn’t get along – they fought all the time. I wanted a better life.” 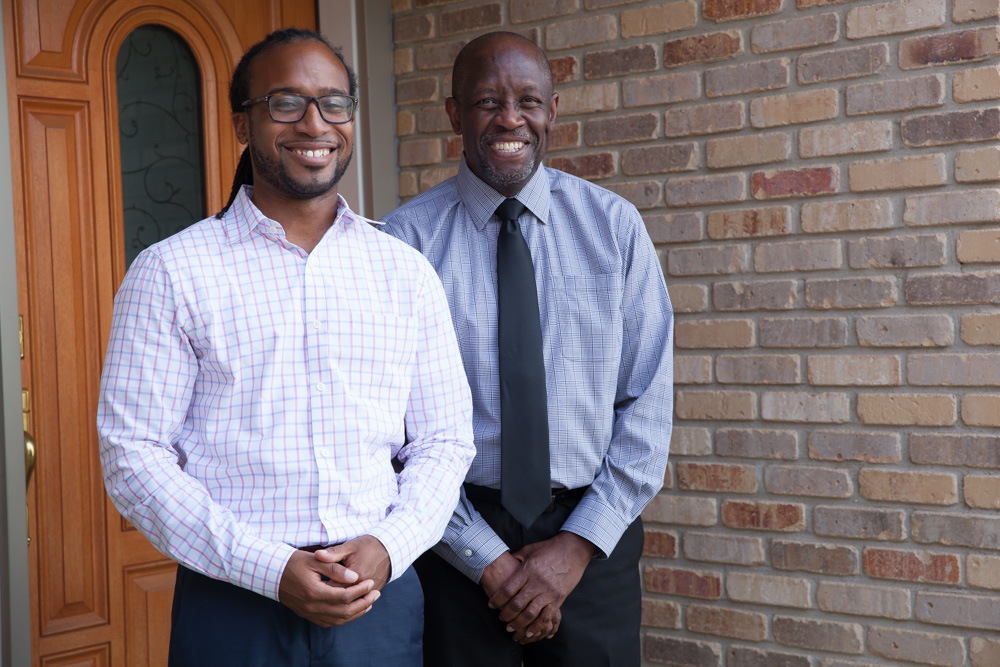 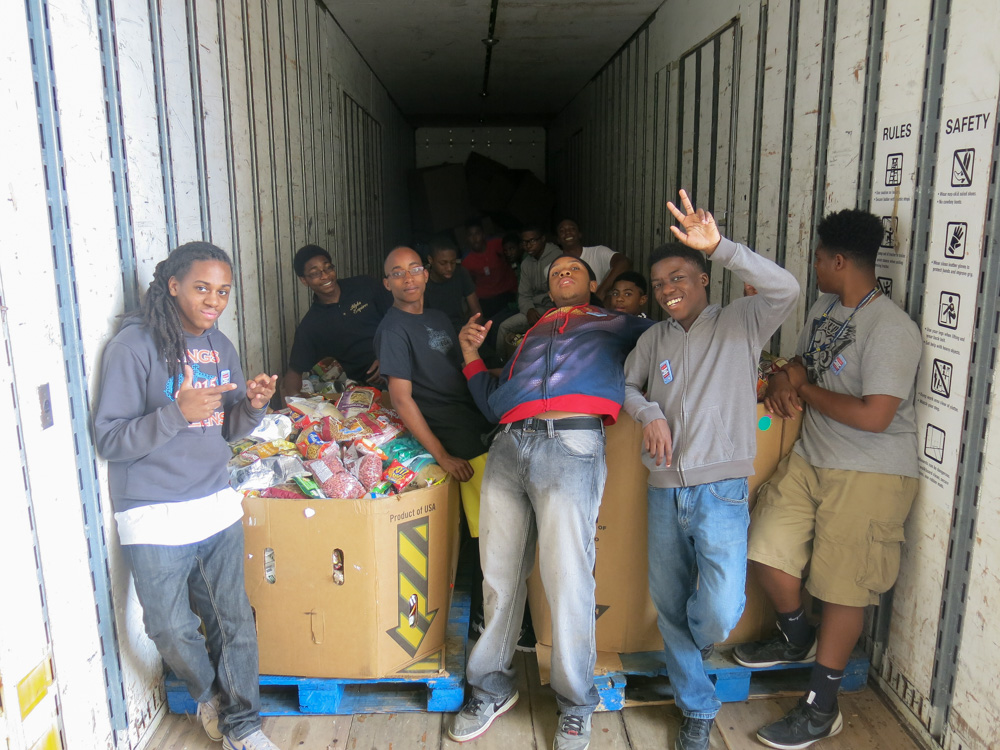 Alpha Esquires aims to develop future leaders. “I knew joining the Alpha Esquires would be life-changing for me,” says Austin. “I wanted to learn about the business world, I wanted to know how to conduct myself and become a better man.” Nobody knows that more than Shaun’te Edelen, Austin’s mother.

“I was definitely going through a hard time,” says Shaun’te. “My husband of 14 years just left me and my boys. Also, at the time, we had adopted a baby girl, Autumn.” Shaun’te thanks God for her two church families at Gospel Temple and New Creation Church of God, her mother, sisters and most especially the Alpha Esquires. “It takes a village to raise a child,” says Shaun’te. “At a time when I was in need, Alpha Esquires was there for my boys. The way the streets are nowadays, I can’t thank or say enough about how the Esquires helped my boys. I recommend it to all young men, whether they’re in a hard situation or not.”

Today, because of his desire and involvement in the Alpha Esquires, this six-foot-two, positive-spirited, polite, bowtie-loving teen undoubtedly has learned how to conduct himself and is accomplishing extraordinary things. By attending Alpha Esquire’s Saturday workshops held at MCC’s Work Force Development Center throughout his high school career, Austin is empowered to look people in the eye, offer a handshake, dress and groom for success, tie a bowtie and necktie, speak confidently in public and introduce himself to strangers. “I own at least ten bowties,” he laughs. “Seriously, I’ve learned so many life skills and lessons through the Esquires – and all in a loving, caring, brotherhood kind of environment.” He chokes up when he talks about Sam Wells. “Mr. Wells is nothing but loving to all of us,” he says. “He’s a mentor and advisor but he’s also a father figure to me. I trust him. He treats all of us like his own kids.”

Sam Wells is a member of Alpha Phi Alpha Fraternity, a GMI grad and currently senior director of sales at Inteva Products, LLC, an automotive component company in Troy. He is one of seven children who grew up in a home where education and contributing to society was deeply emphasized. “My father didn’t get an education,” he says. “But he spent his life making sure his kids did. There were consequences if we brought home below-average grades. My dad often said, ‘I don’t have average kids, so don’t bring home average grades.’ We were raised in an environment to excel academically and to always give back.”

Sam is definitely giving back. He has been married to Faye for 36 years, raised two college-educated children, balances a demanding career, and gives time and service to his community. He is an active and hands-on advisor for the Alpha Esquires and served on boards for the Urban League of Flint, Big Brothers Big Sisters, and somehow finds time to stay fit. “It’s in my DNA to do for others,” he says. “Helping to impact a young person’s life is a thrill for me.” He believes being an involved, supportive parent is the key to raising kids and uses that same philosophy as a mentor to his 30+ Esquire kids. “I treat them like my own,” he says. “It’s about building trust, staying connected to their lives, being genuine and being there for them. I tell them all, ‘You control your own destiny.’”

It’s not uncommon for young Esquires to call Sam and ask to borrow a bowtie or a suit for an interview, or simply request advice. He loans out items freely and he’ll talk at 2am, because that’s the kind of mentor-advisor-father he is. For two decades, graduated Esquires continue to write Sam letters expressing gratitude for changing their lives, teaching them how to focus and set goals, assisting them with college applications, strengthening their character and being tough with them in a loving way – in addition, they ask him to be the best man at their weddings or Godfather to their children – Sam is an intricate part of the lives of current and former Esquires.

Sam is especially proud of Austin, who graduated in June with high academics from Carmen-Ainsworth High School. He served as the Alpha Esquire president, is enrolled at Mott Community College, earned an Alpha Esquire scholarship and laptop, and networked his way into an on-campus position in MCC’s Public Safety Program. Austin also works at Tropical Smoothie Café and continues to help take care of siblings, Avion and Autumn. “It wasn’t easy,” Austin says. “I remember back at Hamady when I never touched or owned a textbook. I was advised by Sam and other Alpha advisors to enroll at Carmen-Ainsworth. It was there that I was issued my first textbooks.” He read them (history and algebra) and then on his own initiative, decided to check out the same textbooks from the library. “I studied at school and when I got home I studied again from my own textbooks.”

He credits his turnaround to mentors and advisors like Sam Wells and Brian Larkin. Larkin, a 2002 graduate of the Alpha Esquires who earned degrees at Morehouse College, Florida State University and is a current Ph.D. student at the University of Michigan, has re-entered the Alpha Esquire scene to do his own “giving back.” Brian remembers his first encounter with the organization that changed his life more than a decade ago. “Omar Sims and Robert Matthews were hosting an event at Baker College, ‘Undoing Racism,’ and I was there,” he says. “I spoke up at the event and afterwards, they approached me and said they saw potential in me. So I joined Alpha Esquires.”

Belonging to the group is free. “The only ‘cost’ is participation,” says Larkin. “To get the most from the program, you’ve got to put the time into it.” Sam agrees and adds, “It’s more than showing up. It’s volunteering, putting in effort, and making positive changes to cultivate a sense of purpose and to set goals.”

The Alpha Esquires expect members to be committed to self-improvement, grow in their leadership abilities and volunteer at community events. The advisors plan Saturday workshop themes of value to the young men. “The ‘Project Alpha’ workshop teaches about manhood and responsibility,” says Sam. Other learning opportunities offered include ‘You and the Law,’ ‘How to Dress for Success,’ many leadership conferences and, of course, ‘Go to High School-Go to College,’ is the most treasured event for every Esquire. “We take the young men on a trip to visit a college campus,” says Sam. Visits to HBCUs (Historically Black Colleges and Universities) over the years have included Fisk University, Kentucky State University, Howard University, Morehouse College, North Carolina, AT&T University and this upcoming year, they’ll travel to Tuskegee University.

The Esquires have grown and evolved in other ways, such as scholarships and gifts to recognize the academic performance of all members. “In the early days, we didn’t give out scholarships, but we realized we needed to do more to support our young men, so we began raising funds for scholarships and to provide new college freshmen with microwave ovens or refrigerators. Today, dorms come with efficiency-style appliances, so, we shifted our focus to laptops and tablets.” Austin received a scholarship at his graduation with gratitude. “I consider the scholarship and laptop icing on the cake,” he says. “But what matters more than the money or laptop are the morals and values and work ethic I’ve learned from Alpha Esquires – no amount of money can compare to that.”

Austin’s younger brother Avion, 16, has followed in Austin’s footsteps and became an Esquire in eighth grade. The brothers have volunteered at various community events such as Warrior Dash, Food Bank, First Frost at Flint Institute of Arts, Postal Carrier Food Drive, Brandon Carr (of the Dallas Cowboys) Football Camp, March of Dimes Walk and the MLK Flint annual dinner program. “These brothers are always available to volunteer,” says Sam. “They’re reliable and responsible.” Avion is already showing exceptional leadership skills. “We have randomly asked him to do some public speaking, recite poems in public and he nails it every time,” says Sam. Austin is protective of his little brother. “He has a health condition and a history of seizures, so I’m always watching out for him,” says Austin. The Edelen brothers, along with the Alpha Esquires, practice with intensity and discipline for the bi-annual, competitive and highly anticipated “Step Show” event. “Stepping is a rich, African-American fraternity/sorority tradition of hand-clapping and foot-stomping rhythmic movements, sounds and words,” says Sam. “Avion picked up on it right away and helps to teach other Esquires.”

When Sam reflects back on the young men who have been connected to Alpha Esquires since its establishment in 1997, his voice drops to a reverent whisper. “We’ve witnessed many successes,” he says. “The kind of men emerging from this program is phenomenal.” He lists Esquires who are now working as a doctor, pro-athlete, NFL Coach, minister, recording artist, aerospace engineer, director of community development, CFO of Detroit Public Library, head coach of a women’s basketball team and many other diverse and notable careers. “That’s worth all of it,” he says. “I’m involved and continue to be involved because the young men who participate in Alpha Esquires, my family, and my community are what matter.”