Attorneys, judges, dignitaries, friends and family members attended a ceremony at the Genesee County Courthouse in September that honored Andrew Jackson Transue, who was an attorney that practiced law in Flint for many years. He is best known for successfully arguing a landmark case in 1952, Morissette vs. The United States in front of the Supreme Court. A photograph of bomb casings that had been used as an exhibit and was given to the court administrator to add to the Historic Photographic Collection.

Chief Judge Richard Yuille was the first to speak at the ceremony. “It is my privilege to honor Andrew Jackson Transue,” Yuille said. “He was a very fine lawyer.” Don Rockwell President-elect of the State Bar of Michigan, gave a little history about Transue’s background. He was born in Clarksville, Michigan and graduated from the Detroit College of Law, was admitted to the bar in 1926 and began practicing law in Flint in 1927. He was also a Genesee County prosecuting attorney for two years and was elected to the U.S. Congress, where he served for three years. After that, he resumed his practice in Flint until he passed away. “Andy commanded great respect,” Rockwell noted. But what he remembers most about Transue is the 1952 trial.

Mr. Morissette was a recycler who had collected spent bomb casings from an air force practice bombing range, thinking they were abandoned, then sold them as scrap metal for $84. He was charged and convicted of “knowingly” converting government property to himself or the junk dealer. His defense was that he honestly believed the casings were abandoned, and appealed the ruling. The Supreme Court reversed the conviction on the basis that “an injury can amount to a crime only when inflicted by intention,” meaning, the person must intend to commit a crime. 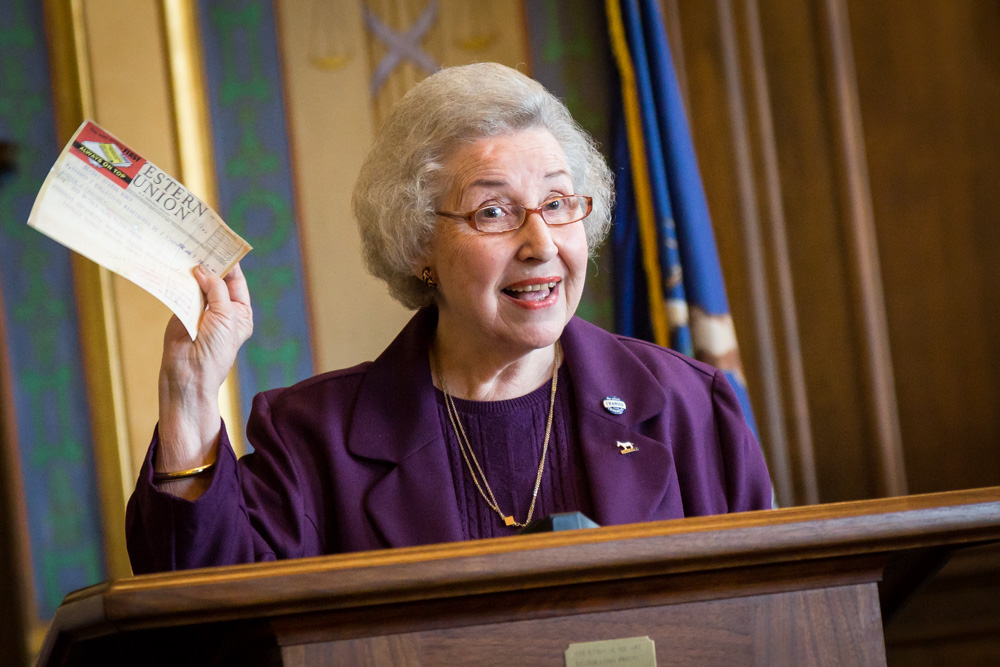 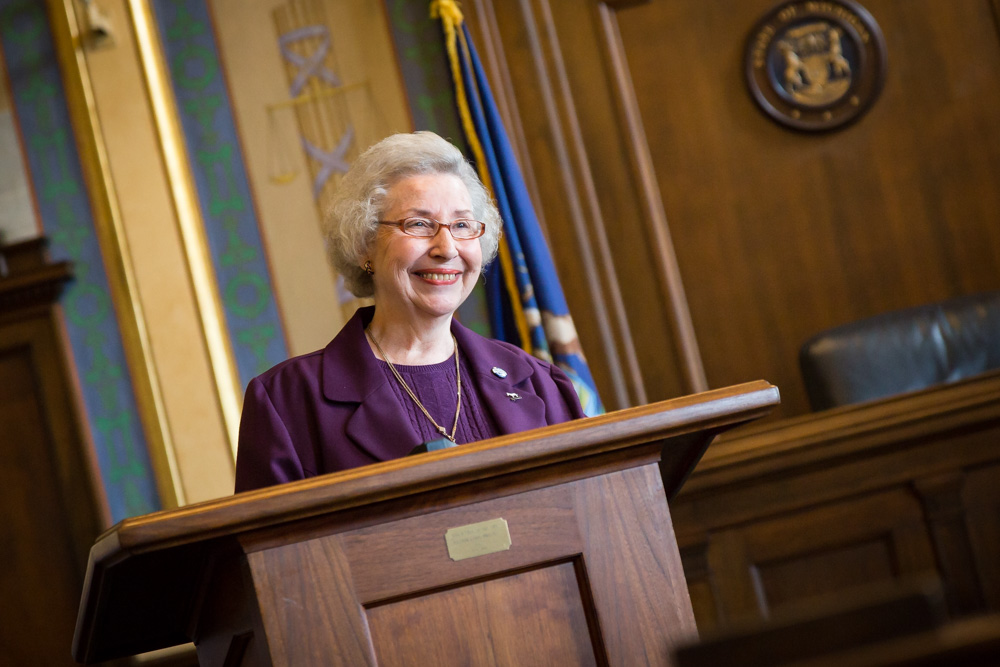 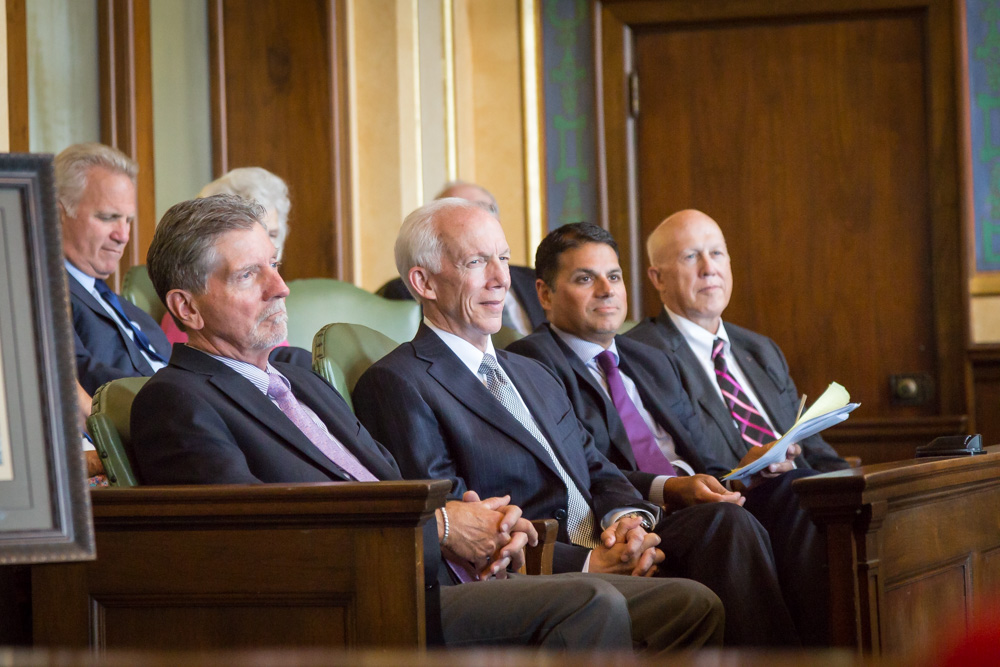 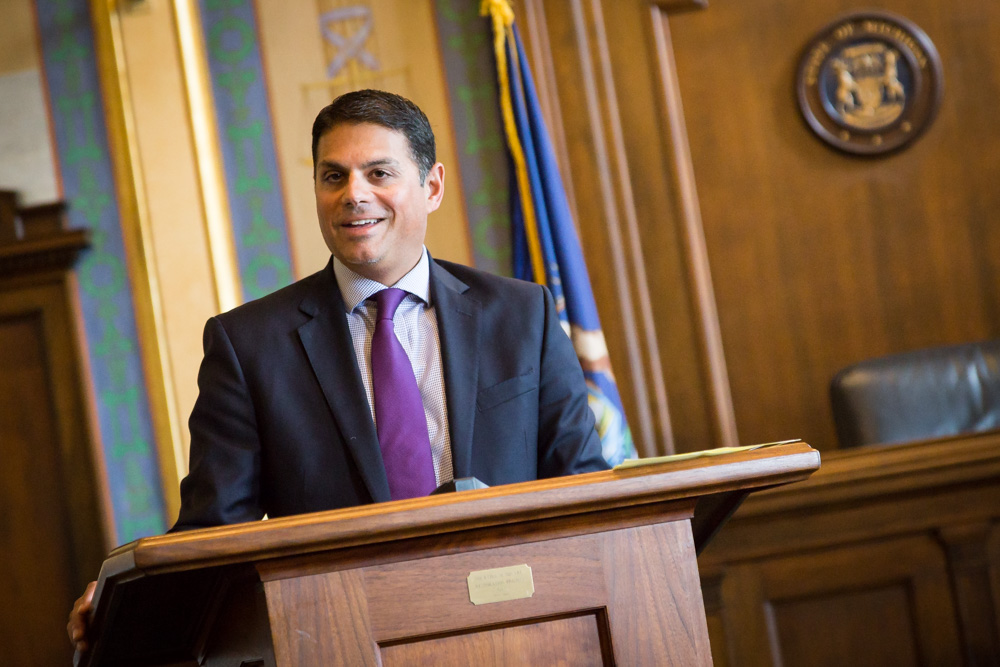 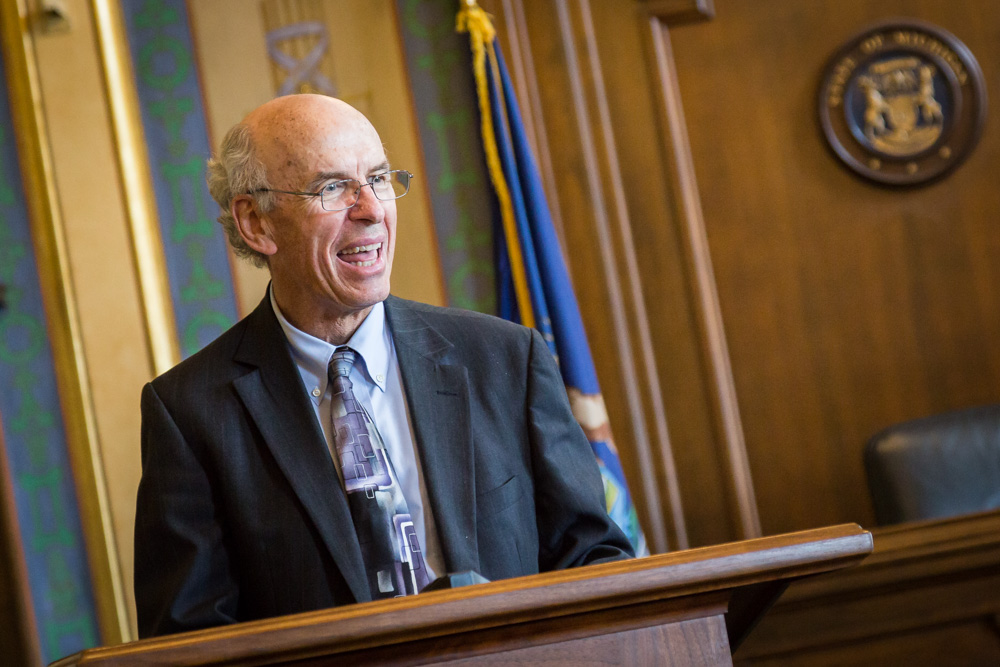 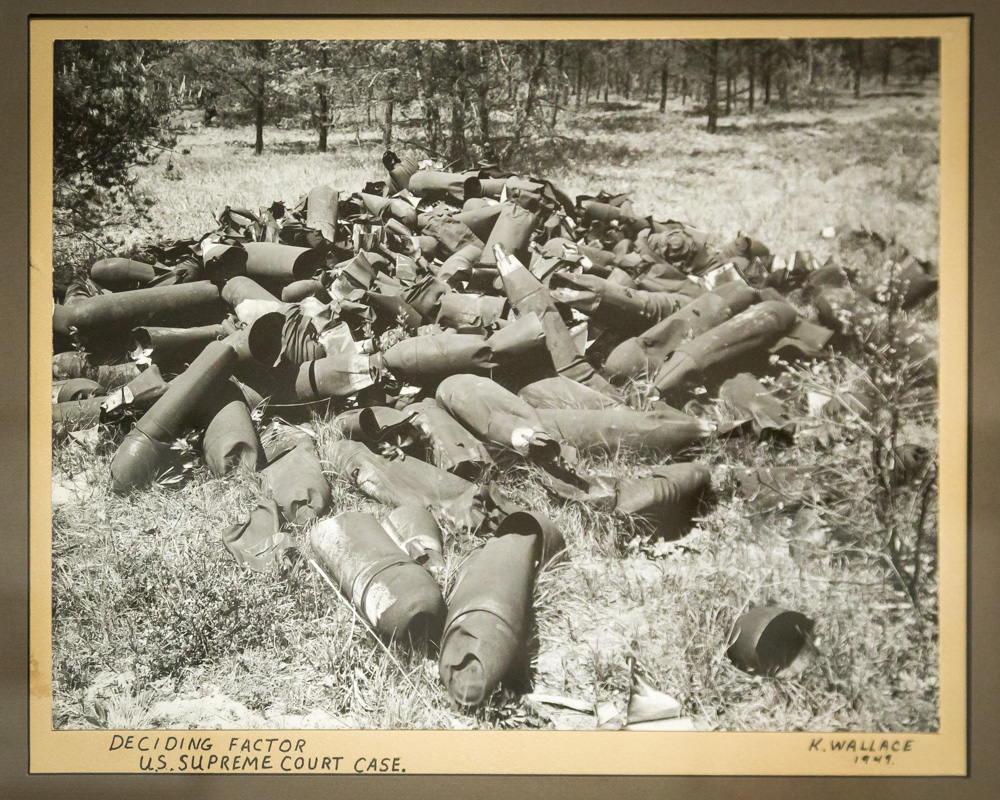 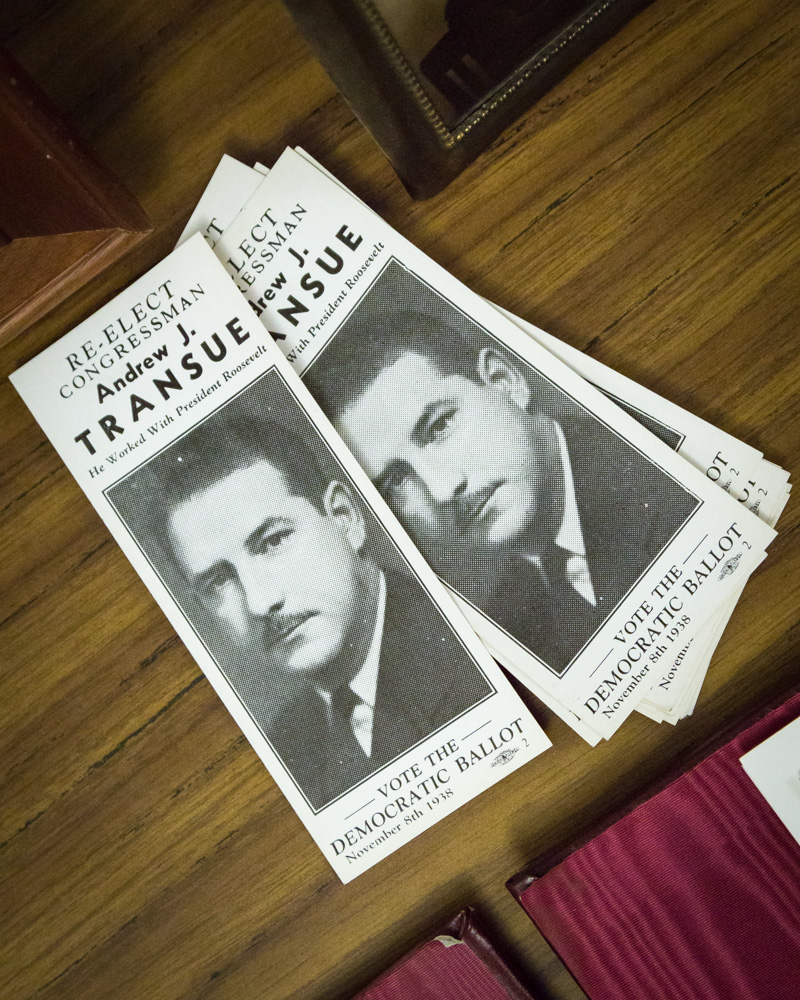 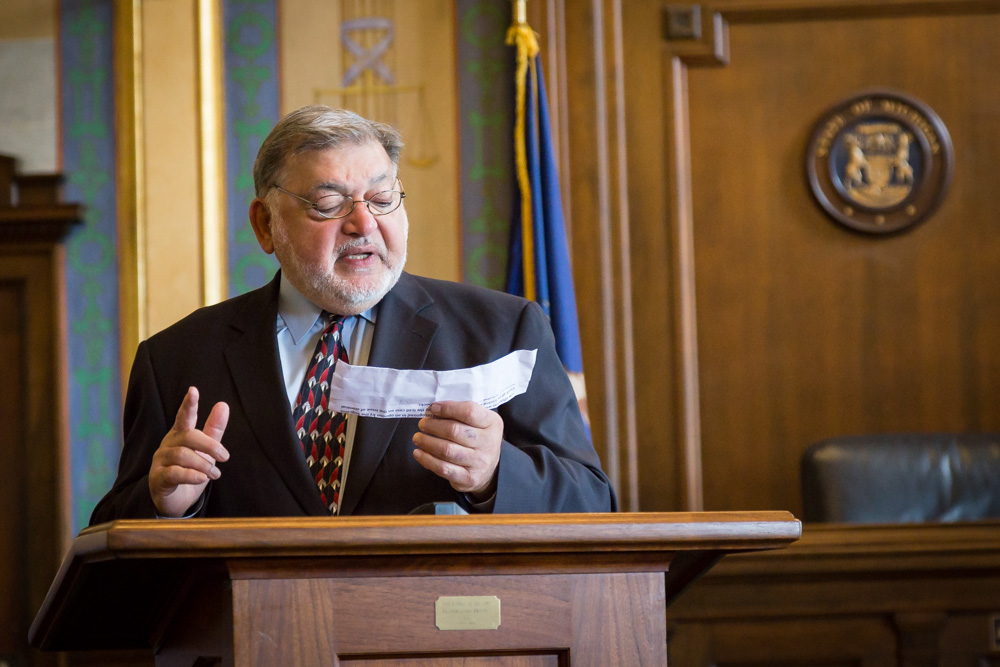 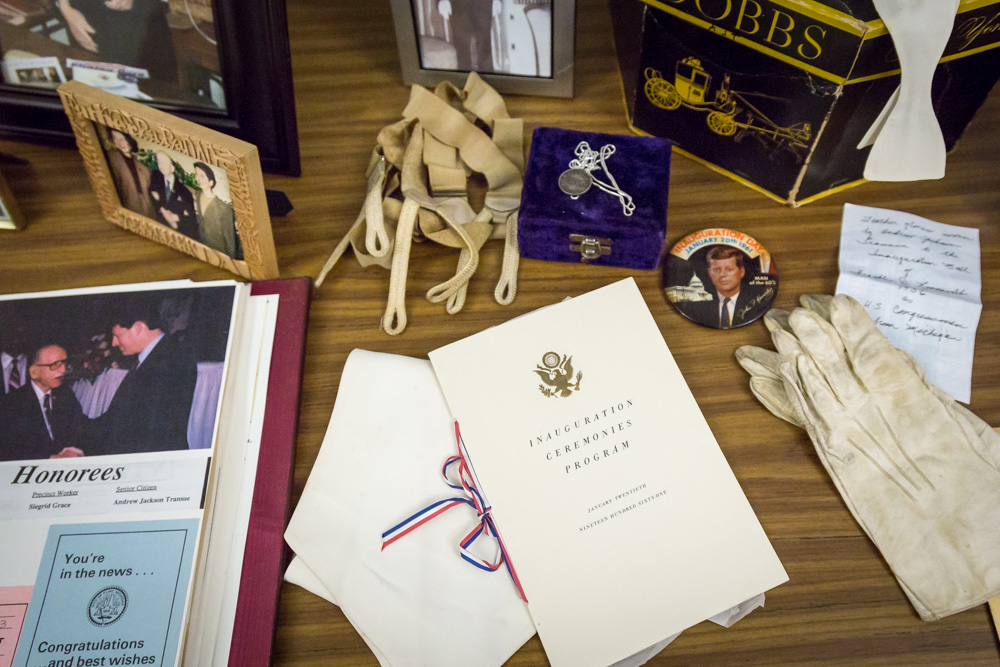 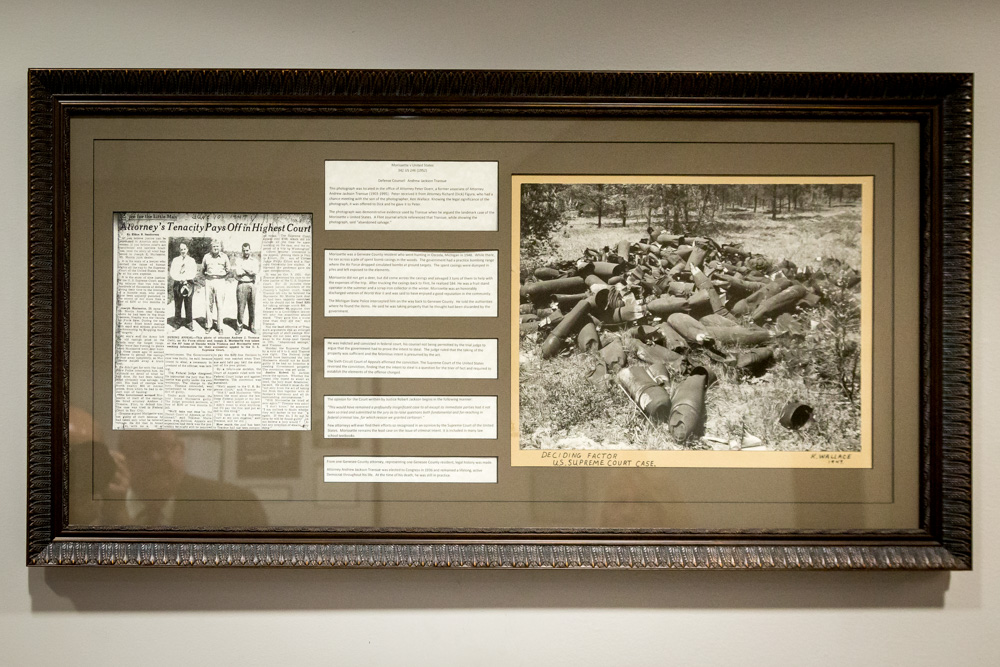 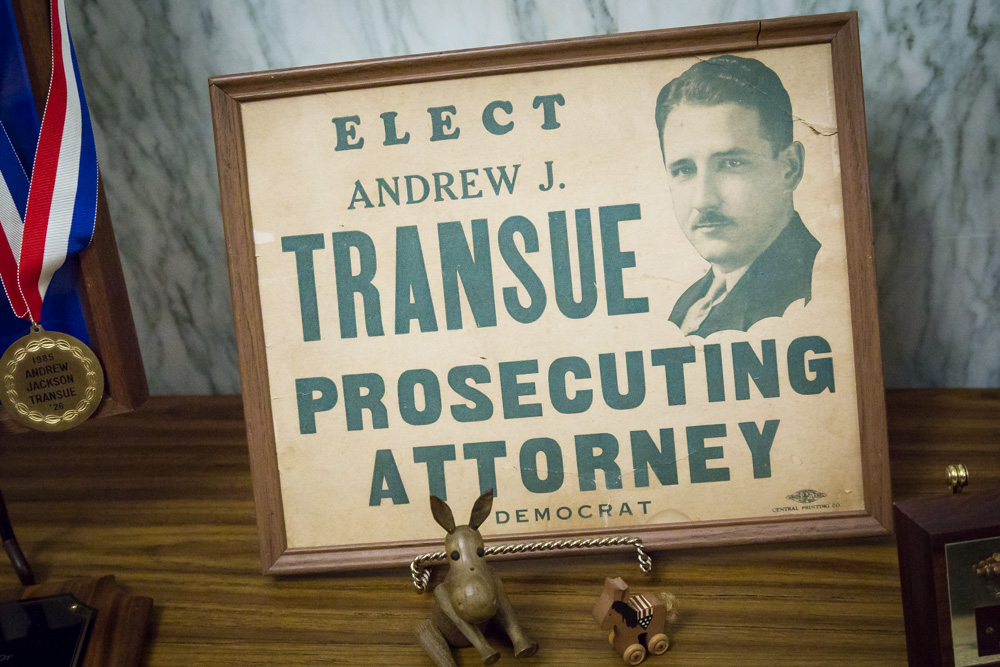 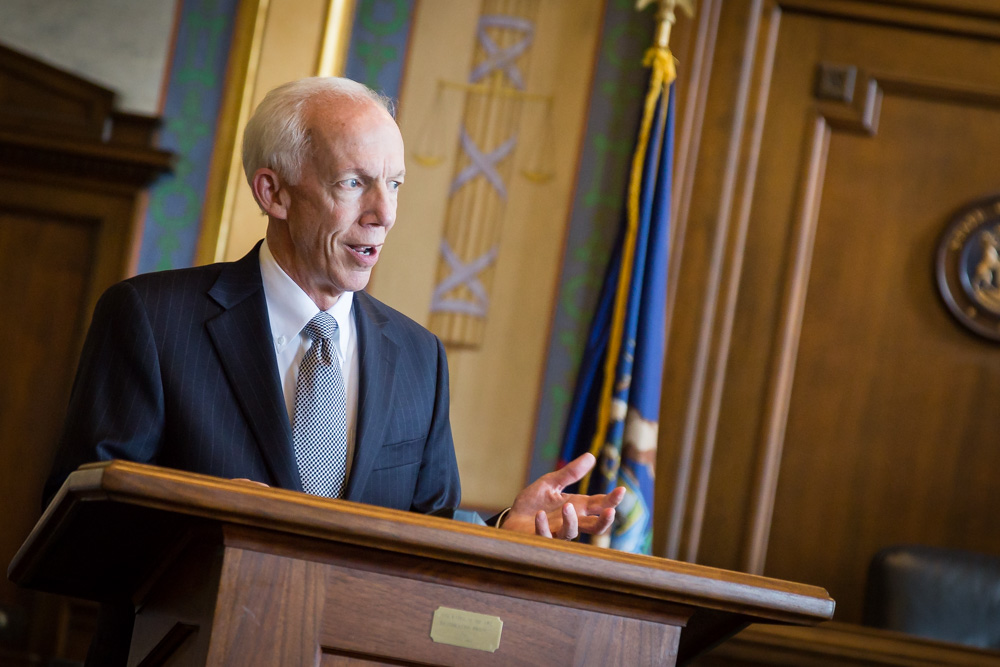 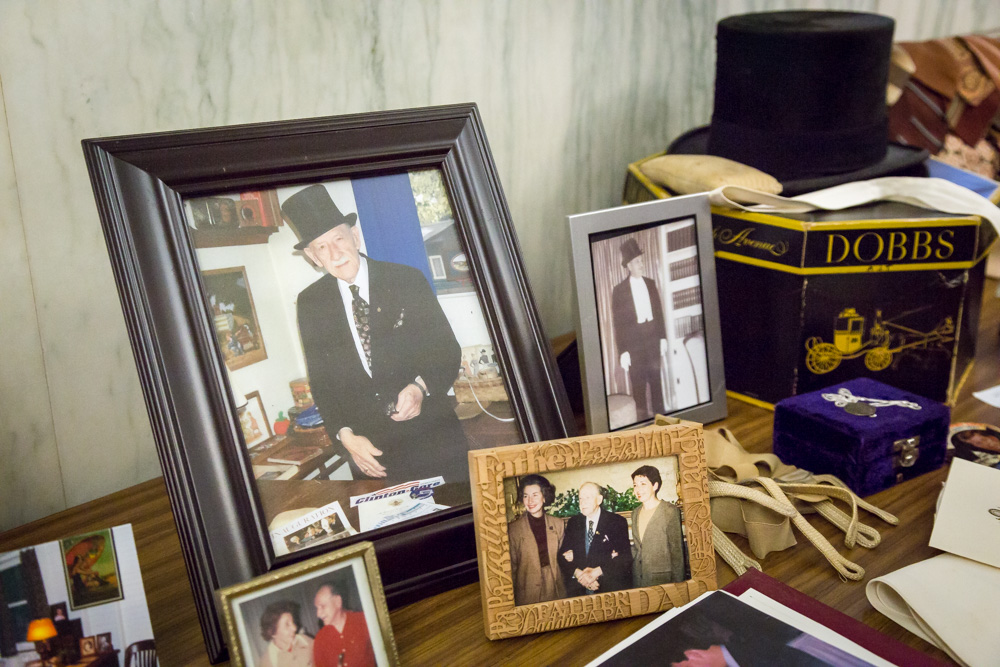 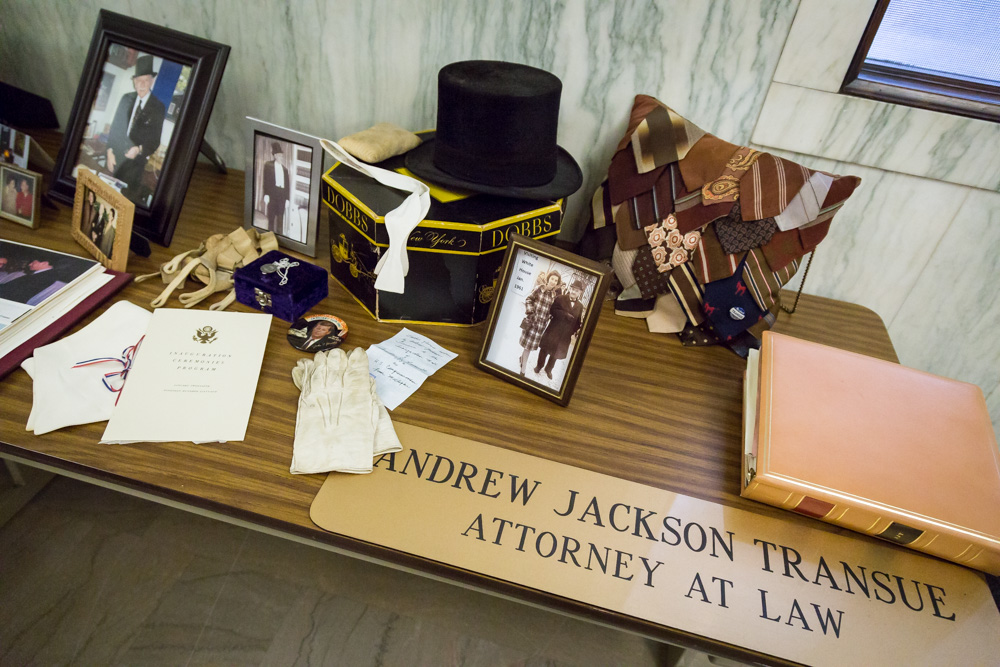 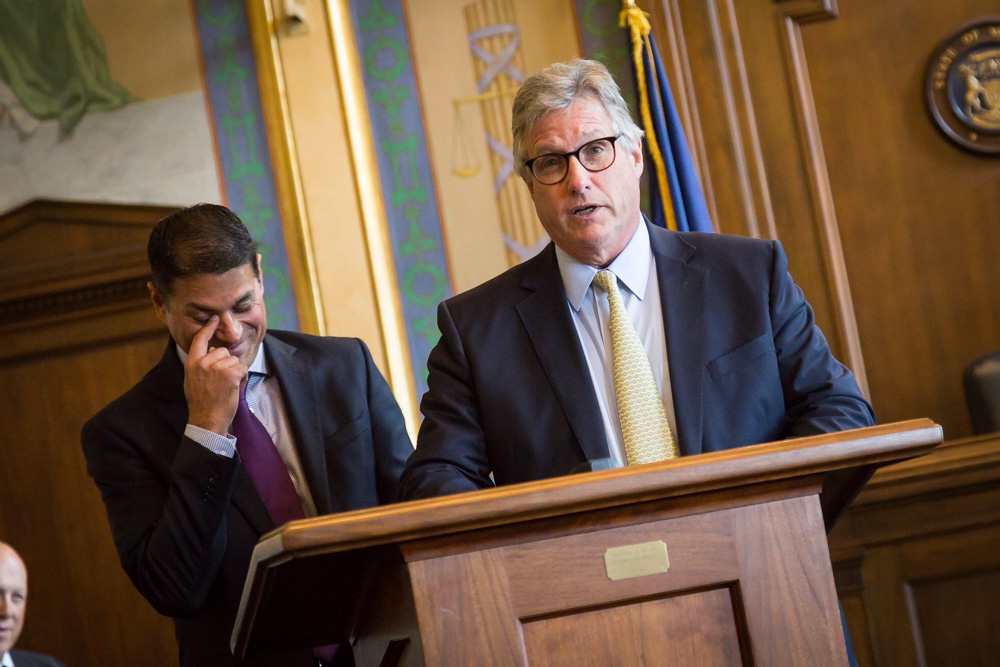 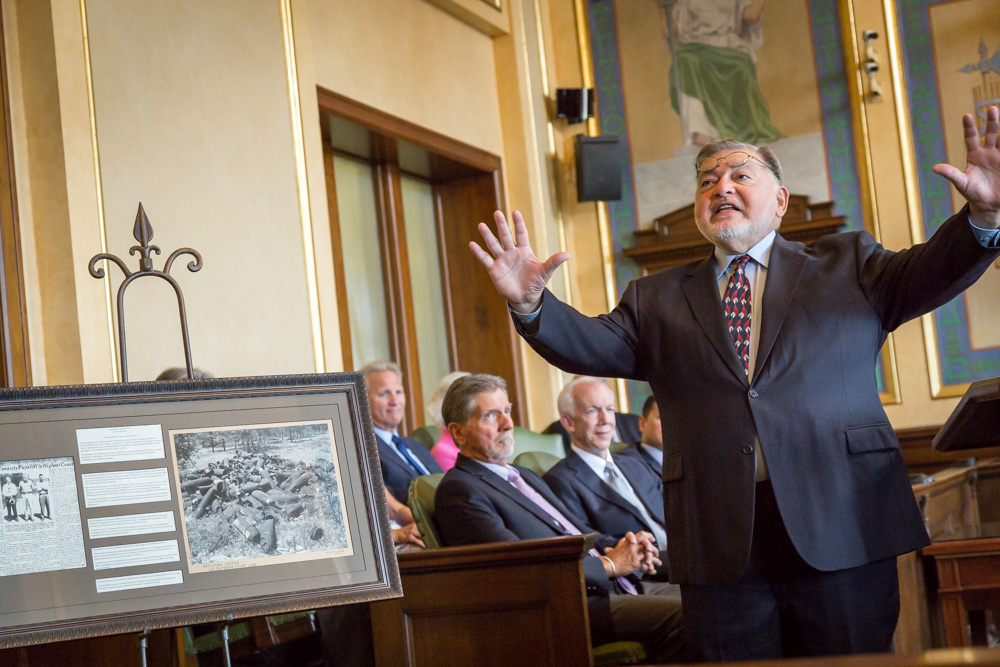 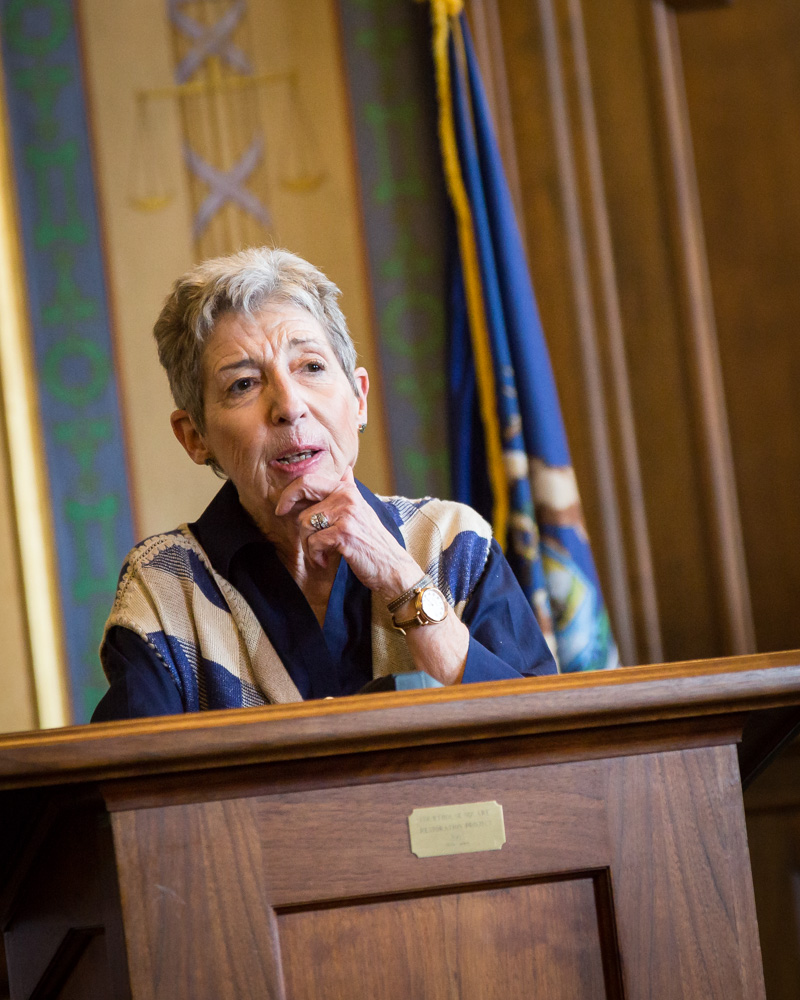 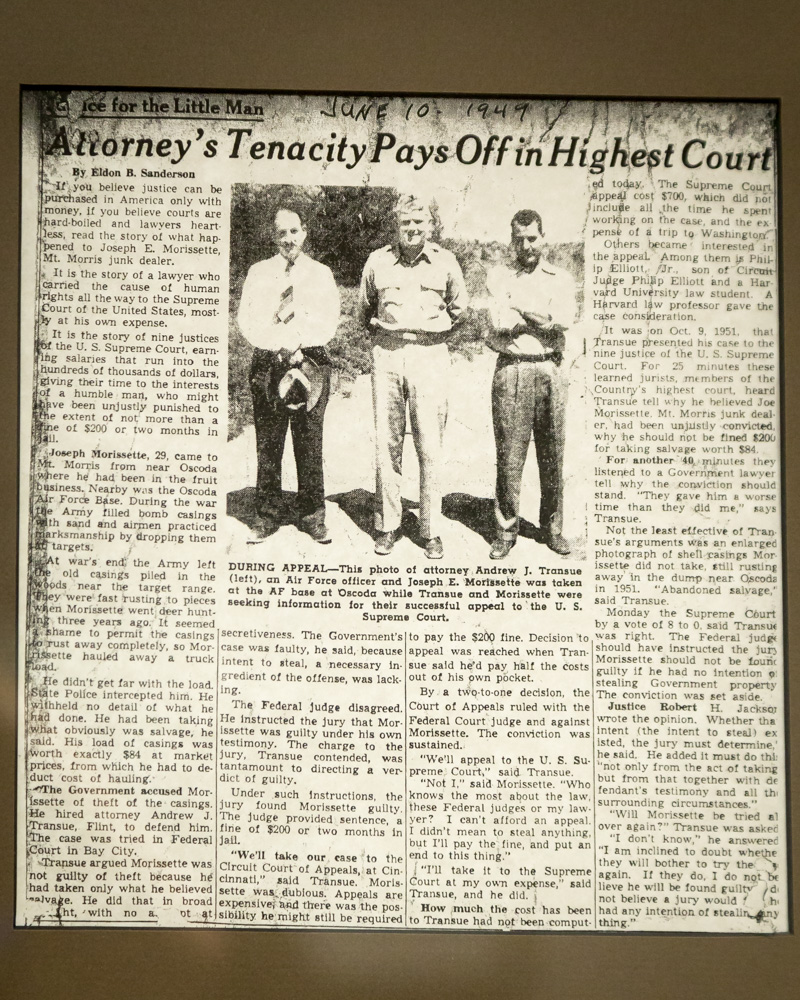 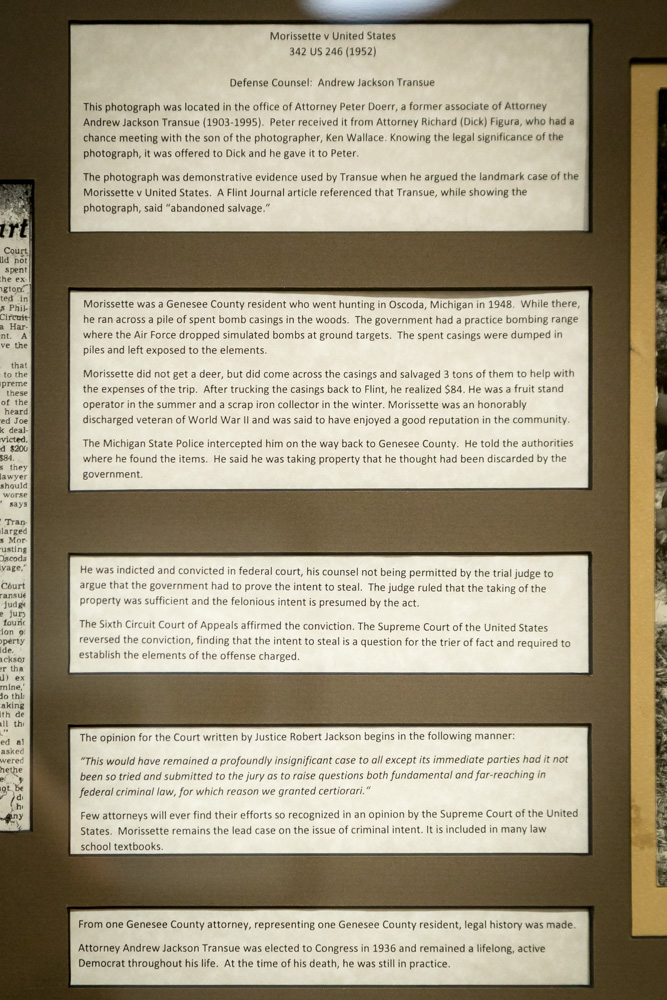 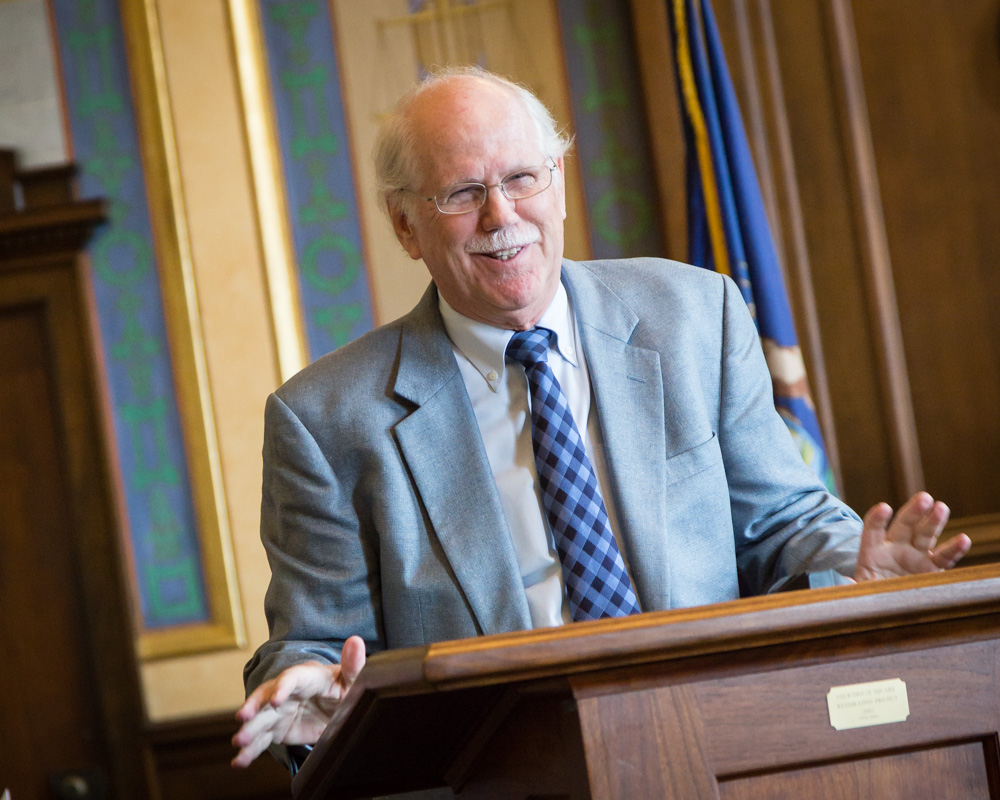 It was thanks to attorneys Peter Doerr and John Nickola that the exhibit made its way to the Courthouse Collection. Doerr had been given the photo by another attorney, Richard Figura, who had run into the photographer’s son. The photographer’s son gave it to Figura who gave it to Doerr, knowing that Doerr was an associate of Transue. A few months ago, Nickola was at Doerr’s office on other business and they started talking about the Morissette case. Doerr pulled the photo of the bomb casings out of a closet and gave it to Nickola, who in turn gave it to the court administrator. When Nickola saw the photo he said, “This is sacred to our profession.”

Doerr remembers working with Transue 40 years ago, back in the day when the newest typewriter was made in 1948 and legal research was done with books. Doerr also remembers Transue for his work ethic and sheer determination in taking the Morissette case all the way to the Supreme Court. Nickola knew Transue when he was just eight years old. “He encouraged me to go into law,” he remembers.

Transue’s daughters, Tamara Transue Royle and Andrea Transue Haidle also shared some memories of their father. Royle, his oldest daughter, remembers traveling to Washington D.C.  with her father, when he was to appear before the Supreme Court when she was just ten years old. “He was a bit nervous,” she shares. “The judges were imposing. I thought to myself: ‘Why is that justice being so mean and picking on my Dad?'” She also recalls the day the telegram came with news that the judgment had been reversed, and of attending the inauguration of President John F. Kennedy with her father. “Dad was very dashing. He is with me daily.”

Haidle was five years old when the case was heard. “I only remember that I wore a dress and black patent leather shoes and I had to be quiet,” she said. “Being Andrew Transue’s daughter, the bar of expectations was set very high. My father was the most moral person I have ever known. He kept appealing because it was a matter of principle.”