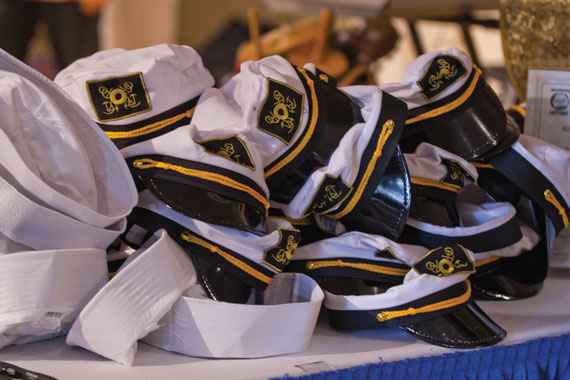 On a sunny evening in April 2013, Cruise for a Cause was held to raise funds for McLaren’s Hospitality House: a home-away-from-home for cancer patients designed to enhance the potency of a new Proton Beam Center at McLaren Hospital. One of only 11 such cancer treatment centers in the United States, the Proton Beam Center—scheduled to open in the fall of 2013—is expected to bring an influx of patients to the area. In order to accommodate these visitors, the McLaren Foundation is constructing the Hospitality House right next door to the Proton Beam Center, where patients will stay during their treatment. This innovative approach to holistic care demonstrates McLaren’s compassion for its patients on a grand scale.

The Hospitality House will open on July 17, 2013 to cancer patients seeking treatment at McLaren, thanks to a partnership with Central Michigan University, creative fundraisers, and the overwhelming support of the Flint community. “It’s hard to find someone who hasn’t been affected by cancer in some way,” said Teresa Williams, Director of Hospitality Services at the Hospitality House. She cites this unfortunate reality—and the desire to change it—as one of the factors that have brought so many diverse groups and individuals to collaborate on the project. Gifts of every size and form have made this endeavor possible. Some McLaren employees have pledged anywhere from the $1-$25 per paycheck, while local businesses like Walgreens are displaying buckets at their registers to collect pocket change. Roxanne Cain, Vice President of the McLaren Foundation, says, “People have given what they can: from a few coins in a collection can to very large cash donations. And it all matters.”

The facility, which will cost $8 million, is a two-story, 42,000-square-foot building offering all the comforts of home. Patients and their families, whose visits are expected to last five to nine weeks on average, will be given one of 32 bedrooms—each equipped with two queen-sized beds and a private bathroom—and a designated space in the pantry room that will comprise their personal space during their stay. All of the patients in the Hospitality House will share the public rooms, which are airy, inviting spaces: a kitchen containing four of every appliance; a dining room; a laundry room with six washer and dryer units; an Art Therapy room, where classes in pottery and painting will be offered; a workout room; a children’s playroom; an adult game room; two contemplation rooms; a library; and an enormous mingling space in the center of the building. The outdoor area will consist of a patio furnished with picnic tables and grills for cookouts, a gazebo, an herb garden that patients may tend to and harvest from, and access to a walking trail. As if these facilities were not enough, the Hospitality House also has three spaces for RVs complete with hookups, for patients who have a motorhome or camper to stay in. A large conference room situated at the front of the building is suitable for gatherings of 150-200 people, and will be available to patients as well as outside groups.

Laurie Prochazka, Director of Marketing and Communications at McLaren, says that the Hospitality House was designed to complement the Proton Therapy Center by providing a space where patients could find peace. “When you’re sick,” she says, “and facing a serious illness, you don’t want to spend time worrying about day-to-day issues such as housing and transportation to and from treatment. We built the Hospitality House to relieve that burden, so patients could focus on healing.”

The plans for the Hospitality House were thoroughly thought-out, and every amenity was carefully considered to ensure that the house would truly feel like a home. While at the drawing board, the McLaren Foundation asked students in Central Michigan University’s Hospitality Administration Program to review the blueprints and offer suggestions and critiques, many of which were incorporated into the final design. The fruits of this working relationship between CMU and the Hospitality House include an internship program, in which two Hospitality Administration students, Garrett Holmes and Kelsey Baptist, will be resident managers on-site. Roxanne calls the internship a “fabulous opportunity for students,” stating that they will be able to expand their skillset by applying their education to reality. Garrett, a senior in the Hospitality Program, has been working with the McLaren Foundation from the beginning stages of the Hospitality House and says, “It’s an honor to be part of such a big project. Hospitality is more than a job for me, it’s an opportunity to care for every single individual who comes through the doors, and at the McLaren Hospitality House, I can be a helping hand to people in their most fragile state.”

Fundraisers for the Hospitality House run the gamut of events and programs in order to encourage community participation at every level. Cruise for a Cause was a luxury cruise ship-themed event held at Flint’s Art Van Studio to benefit the Nights of Hope Campaign. Celebrities included Ted Lange of Love Boat fame and NFL player-turned Hollywood actor, Terry Crews. Live music, delicious food and cruise-deck games had guests partying like they were in Hawaii. Nights of Hope is a sponsorship program designed to offset the Hospitality House’s operational costs, in which donors can “purchase” a room on behalf of a patient for a day, a week, or for the entire course of treatment. The suggested donation for patients who are lodging at the Hospitality House is $35/night, but fulfilling this request is based on ability to pay; some patients will not be able to pay anything, and that is where Nights of Hope will step in to defray their expenses while they battle cancer.

Another fundraiser called “Beside the Fire: A Housewarming Event” will be held in the Hospitality House itself on June 12 from 6:00-9:00 pm. This event is the product of Garrett’s recognition that not everyone can afford a plate at a traditional fundraiser. He also knew that participants enjoy themselves much more when they can see the effect of their giving. With this in mind, the McLaren Foundation set up a gift registry at Target that included all of the items they need to fill the house for its occupants. Anyone who wants to come to the event is welcome, and the only cost for admission is a “housewarming” item from the registry at a suggested value of $25. Guests will bring essentials to fill the house, and together they will have an opportunity to witness the impact of their generosity.

If the Proton Therapy Center represents McLaren’s dedication to cutting-edge technology and cancer treatment, then the Hospitality House represents its heart for healing. The house will be a safe haven for patients to live a good life even during their struggle with cancer, and it will be a gathering place for both patients and their care-takers to come together and support each other. “The community has embraced it,” Laurie Prochazka says, “and I think it’s because there are so many opportunities with this project to become involved at a variety of levels. It makes people feel good to be a part of it.”