Mildred Doran was born and raised in Flint, the daughter of William Doran, a farmer in the early 1900s. Her mother, Helen, passed away when Mildred was just 16 years old, and the teen raised her two brothers and her younger sister while working her way through school. Doran made the history books, however, as she was the only woman to enter the Dole Air Race in 1927, flying from California to Hawaii. She went missing during the flight, along with the crew and several other aircraft. She was just 22 years old.

In 2011, Doran’s nephew Richard A. Durose, wrote an article that was published in AIR & SPACE Magazine, detailing his aunt’s life: Above & Beyond: Aunt Mildred – A race across the Pacific. Durose had never met his aunt and his mother was so grief-stricken by her loss, she didn’t want to talk about it. So, he took on the task of researching her life. 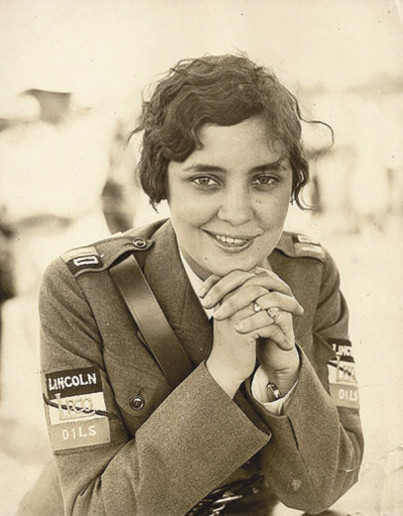 When Doran flew in the Dole Air Race, she had been working as a fifth-grade school teacher in Caro, MI. The teacher had become interested in flying after going to an air show, and a local businessman, William Malloska, owner of Lincoln Oils, had taken an interest in her. The flamboyant marketer was always looking for ways to promote his business, and was well known around Flint as the generous sponsor of baseball and bowling teams.

Though not a pilot, Malloska constructed a hangar and airstrip three miles from Downtown Flint, which was named Lincoln Field. Doran started bringing the latest flying news to the air show performers at Lincoln Field, and in 1927, there was plenty to talk about. Just four days after Charles Lindbergh landed in Paris, James Dole, the “Pineapple King,” announced a prize of $25,000 for the first pilot to fly from California to Hawaii – 2,400 miles over the Pacific.

Doran convinced Malloska to enter an airplane in the doomed Dole Air Race, and to allow her to fly along. The plane, a biplane Buhl Airsedan, was named the Miss Doran in her honor. The pilot was Auggy Pedlar and the navigator was Vilas Knope. Despite engine trouble early in the race, and attempts by the crew and crowd to get her to remain behind, Doran stayed with the plane. 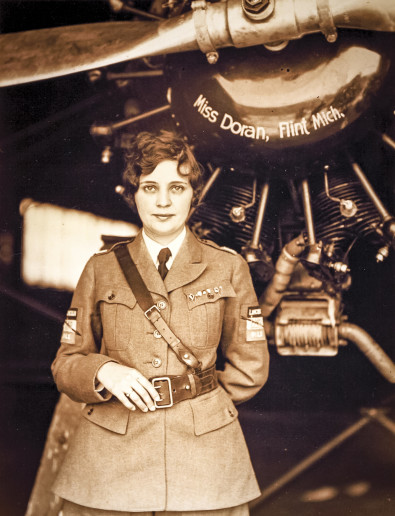 In AIR & SPACE Magazine, Durose provides details of the race when his aunt went missing: “At noon on August 16, 1927, eight aircrafts lined up at Oakland Field in front of 50,000 spectators. Two airplanes, Pabco Pacific Flyer and El Encanto, crashed on takeoff (with no casualties). Six airplanes took off, but three returned in minutes because of mechanical problems – including Miss Doran – its engine ‘sputtering like a Tin Lizzie.’ Mechanics hurriedly replaced its spark plugs. Mildred, waiting nearby, was advised that Pedlar (the pilot) thought it best that she not come along for his second attempt. Still, Mildred boarded. Mildred, the plane and the crew were never seen again.”

Durose remembers when he was ten years old, his family visited Flint and they drove by the Doran Tower, which had been named in his aunt’s honor. In 1929, Malloska had the tower constructed adjacent to Lincoln Field as a memorial to Doran, vowing it would stand for 100 years. Next to the building was a large stone with a quote from Theodore Roosevelt, “Only those are fit to live who do not fear to die.”

But the tower did not withstand the test of time. In 1932, Lincoln Field was bought by a developer and named Lincoln Manor Subdivision. The Doran Tower was moved and the plaque was lost. In 1973, the relocated tower was torn down because the owner could not afford municipal fees and taxes.

Memorials and ceremonies were held in honor of all of those lost in the Dole Air Race. In Flint, factories shut down for prayers. Flags flew at half-mast. Thousands attended a memorial at San Francisco’s Pier 30. Another tribute was held at sea, aboard the SS Maui, and Doran’s fifth grade students sent a floral arrangement with the inscription, “God Bless You Every One.” Some 5,000 floral pieces were set afloat on the Pacific Ocean.

“I wish Mildred had backed out when urged to do so,” said her nephew in his story. “She would have had many other flying opportunities like the Dole Air Race. And I would have gotten to know a very interesting aunt.”