I woke up, jumped out of an airplane, and went to work.

It’s not a typical day by any stretch, and sitting at the computer putting my thoughts into words, the experience still hasn’t sunk in. I can’t believe I just did that!

Weeks earlier, My City Publisher, Vince Lorraine, had discussed with me his idea for a “My Fun” story: basically, we would both skydive and I would write about it. It would be unlike any story we had ever done. I could see the headlines, “My City Crosses One Off the Bucket List,” or “MCM Takes the Plunge,” or “Vince Lorraine and Unknown-But-Extremely-Handsome Writer Plummet to Their Doom – The World Reaches New Height of Despair. Gruesome Details at Eleven.” At the moment of our daredevil epiphany, we mentally looked death in the eye, shrugged our shoulders and decided, “Eh, why not?” 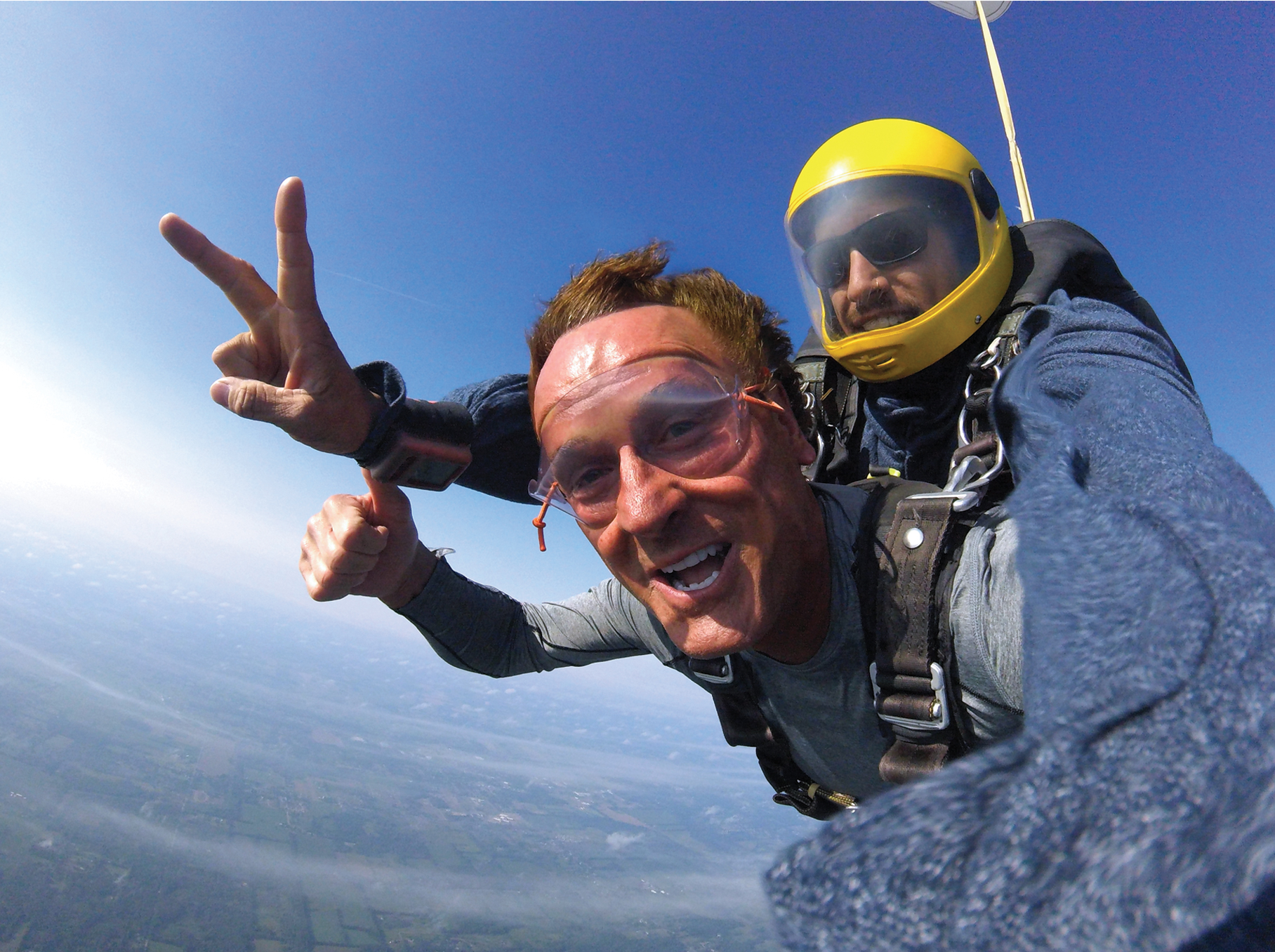 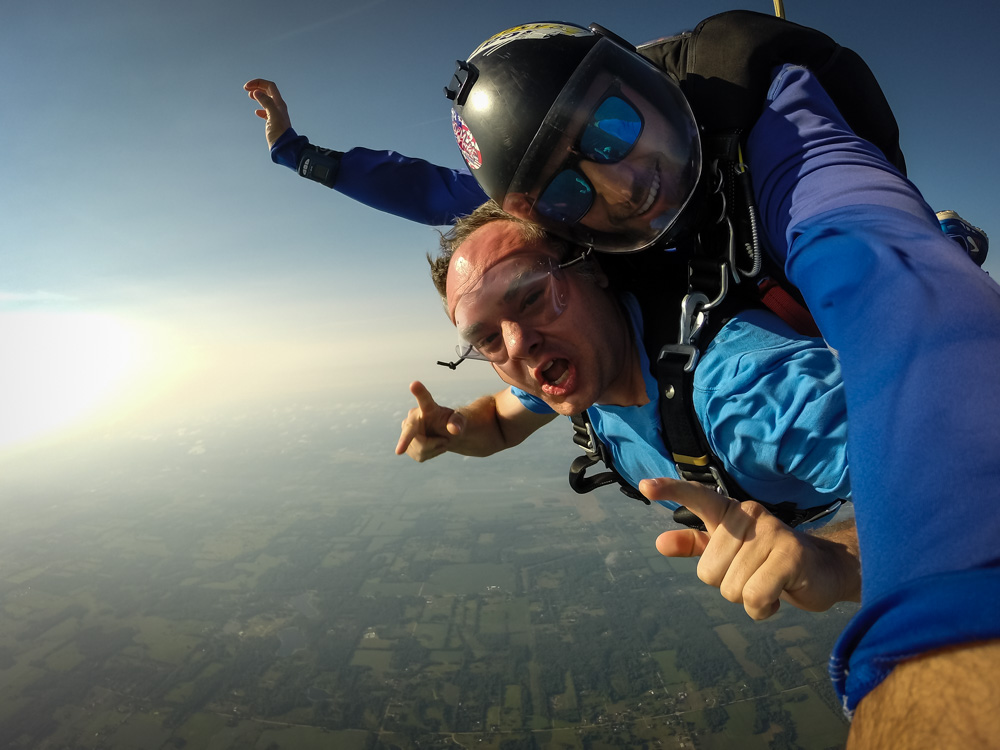 For 30 seconds, existence is simply the wind, the sky, the earth and you – nothing else

I called Capital City Skydiving in Fowlerville, MI and spoke to Jump Manager, Patrick Cserpak. I explained what we wanted to do and he was extremely helpful in getting us scheduled to jump at 8am on the following Friday.

On the morning of our jump, we arrived at Capital City Skydiving nervous, but excited. It was a perfect day. The dense fog that had obscured the land earlier was beginning to burn off and by the time of our jump, we had clear skies. There’s no stopping it now …

We were greeted immediately by the Capital City staff, signed the requisite waivers and began our instruction in earnest. Since this would be our first jump, we had to go tandem – harnessed for the duration to an instructor who would ultimately pull the ripcord. I was assigned to Patrick and Vince jumped with Instructor, Angelo Garrido. As Patrick buckled my harness, I was curious about how many times he has jumped from a plane. His answer: over 10,000 times, making his first jump at the tender age of seven! “So, this is like rolling out of bed and putting on slippers for you, huh?” I joked. “Yes, just like that,” Patrick laughed. Instructor Angelo Garrido has also logged over 10,000 jumps. Vince and I were definitely in the hands of experts. 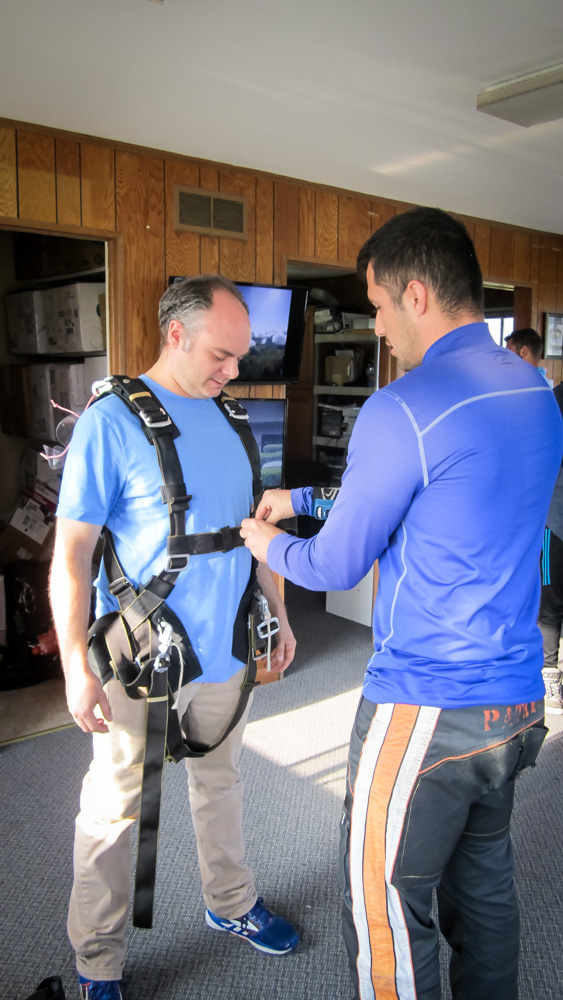 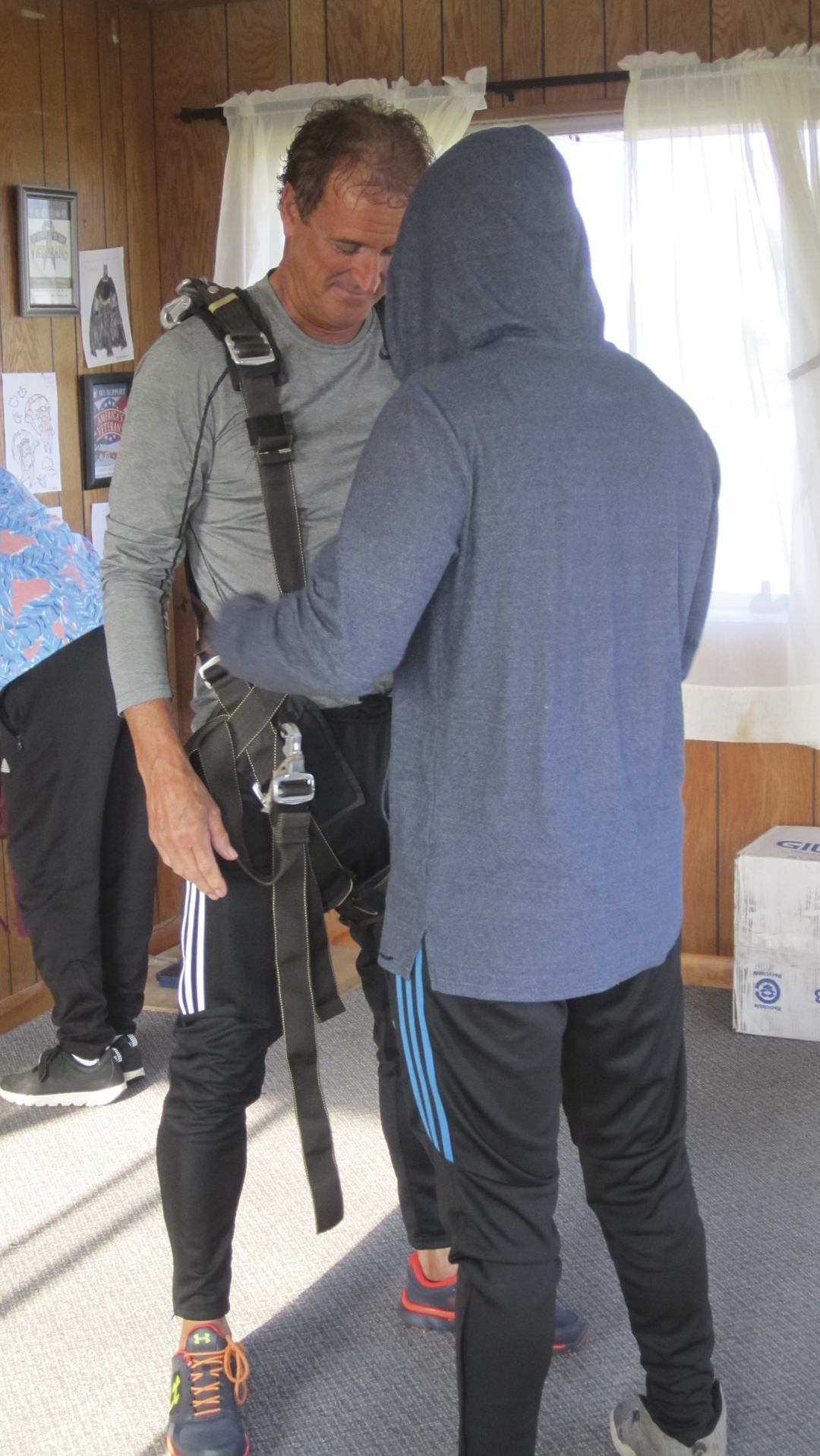 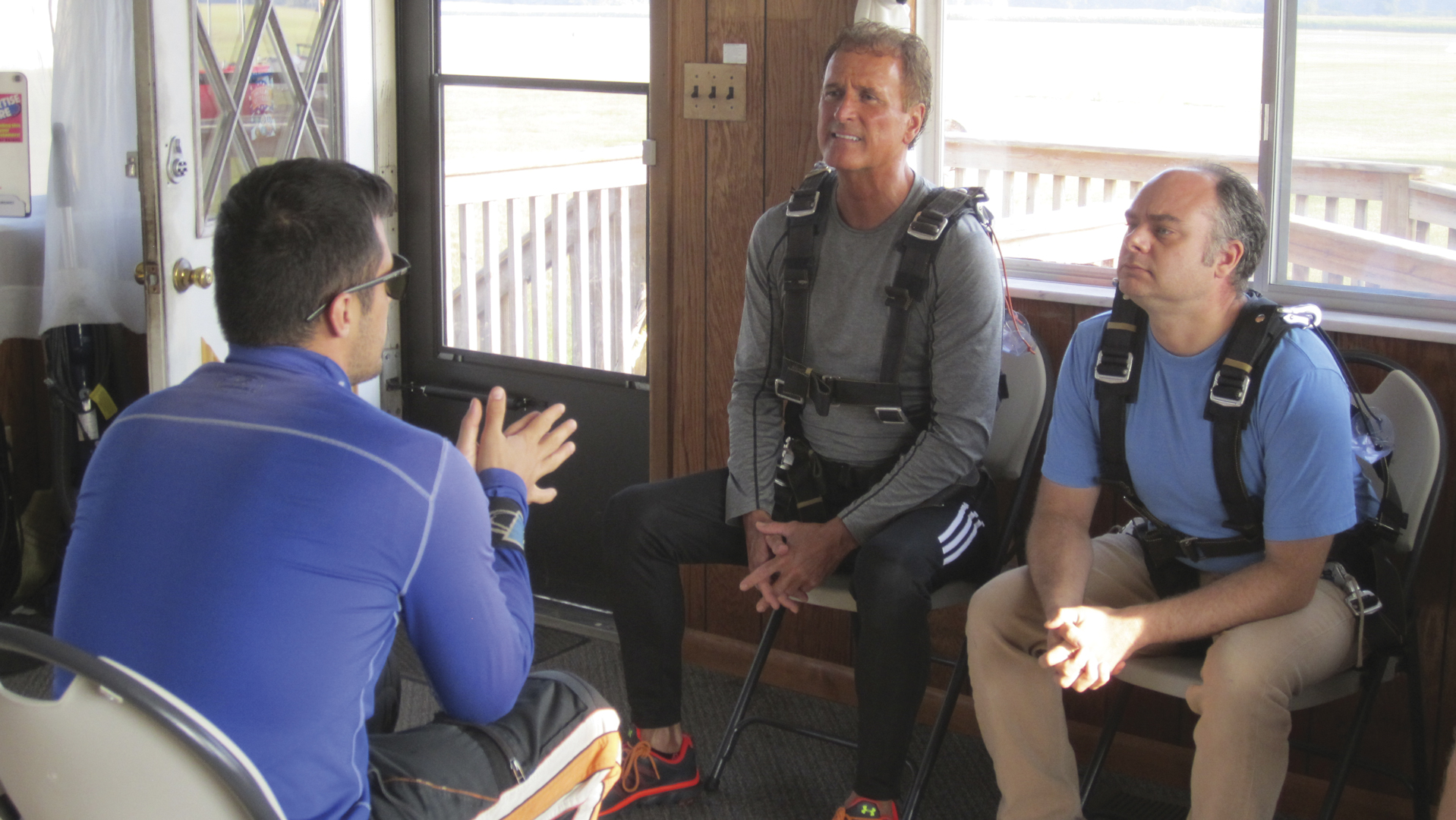 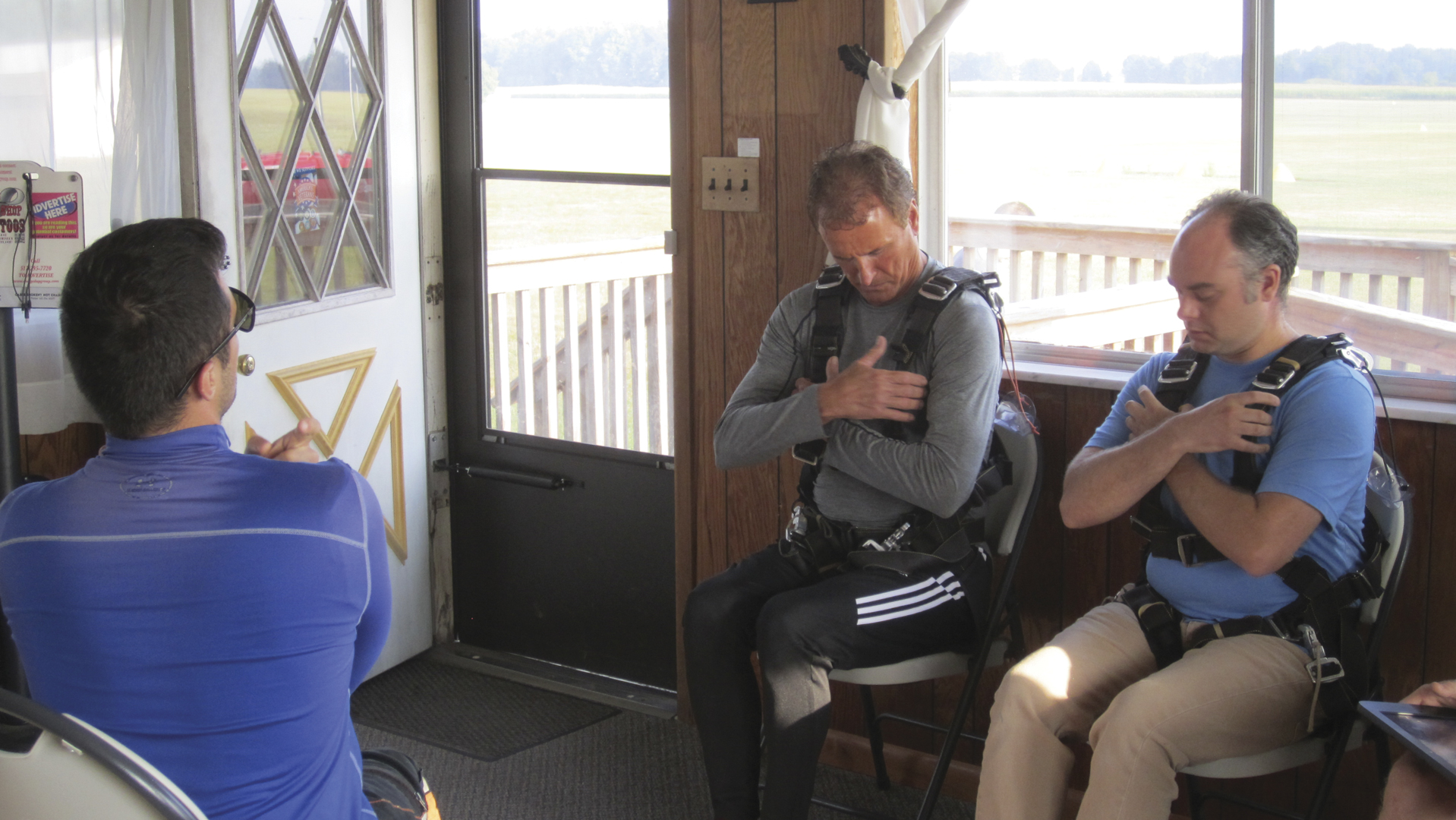 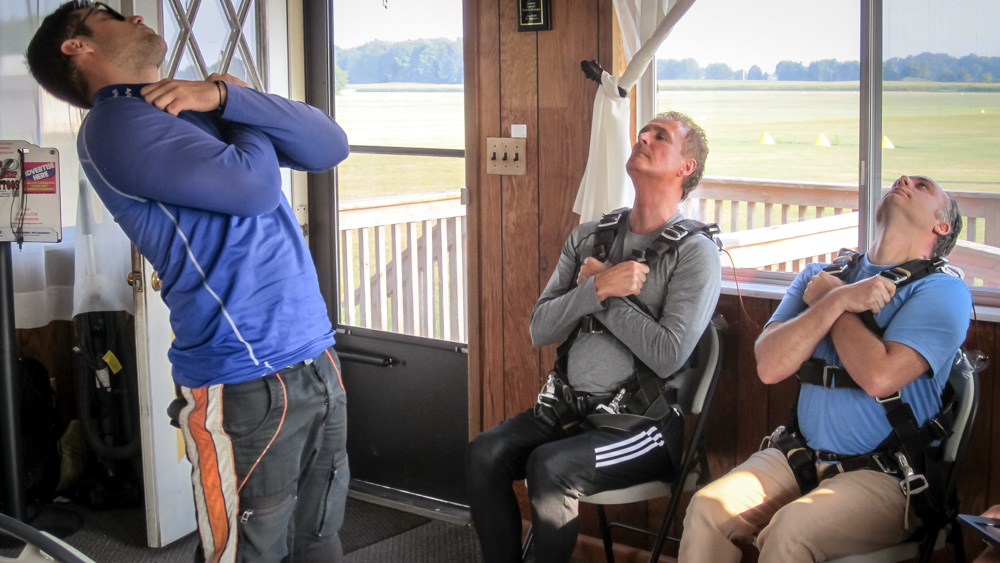 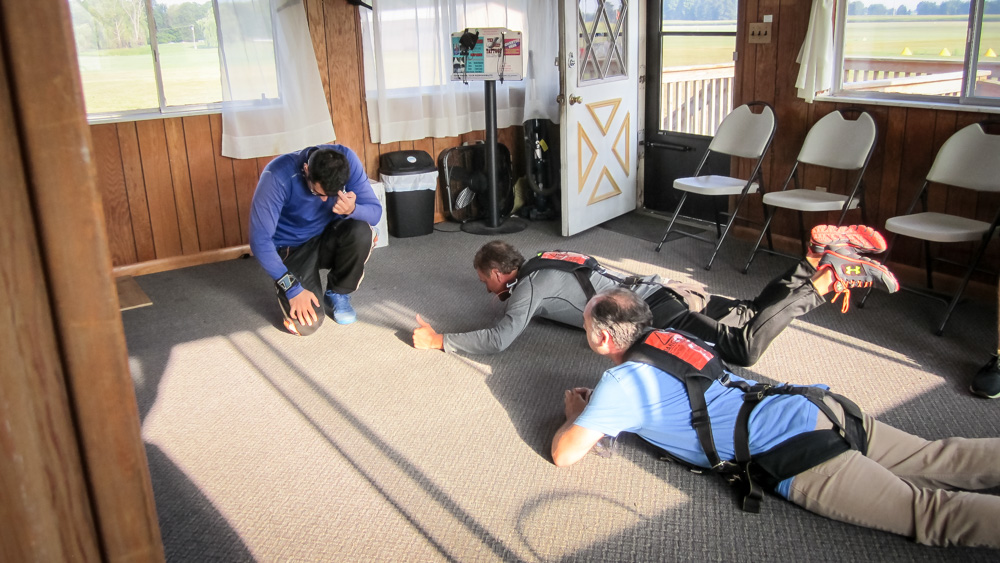 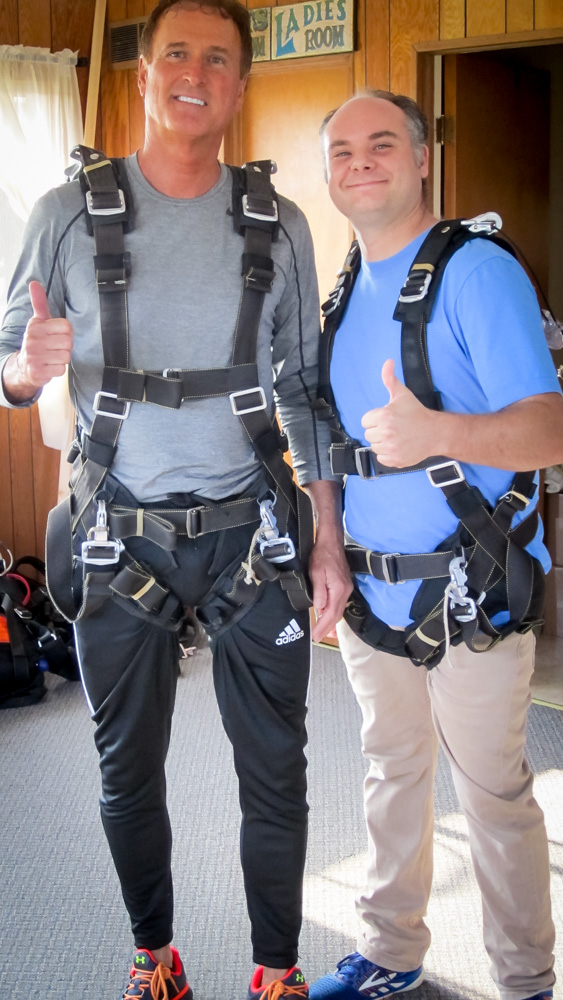 Strapped (very) snugly into our harnesses, we were told exactly what to expect and had a quick training session – how to position our bodies during the jump, freefall and landing. We practiced the motions lying on the floor and in no time at all, we were ready. Vince strutted out to the plane like he was the lead in Top Gun; I strutted out like Mr. Bean – sure that something strange and silly was going to happen up there. Maybe, instead of a parachute deploying when Patrick pulled the cord, an anvil would fall out of his pack. Oh, well, I thought, at least I’ll go out with flair.

Patrick and Angelo wouldn’t allow us time to get nervous – they took over, and their excitement about the jump was infectious. They were pros and I trusted them completely. After all, they rely on that parachute opening, too! With our pre-flight interviews complete, we climbed into the plane. The pilot started the engine and within minutes, we were in the sky beginning our ascent.

I sat looking out the window, strapped to Patrick, as the plane climbed to our jumping altitude. “We will jump from 10,000 feet,” Patrick told me. “We will have 30 seconds of freefall and anywhere from five to 15 minutes with the parachute deployed.” He told me we would travel about 5,000 feet during freefall. “So, we will fall half of our jump height in 30 seconds?” I asked him, wide-eyed. “Yes” was Patrick’s calm reply. “The plane will be moving 80mph when we jump and we will fall through the air at roughly 130mph,” he added. From the window, the earth already looked small and far away when I asked what our current altitude was. “Oh, we are at about 1,000 feet,” Patrick answered. I turned to Vince, “Hey, multiply our current height by ten!” Vince looked astonished, “Wow! I thought we were almost ready to go!” he exclaimed. The instructors laughed. 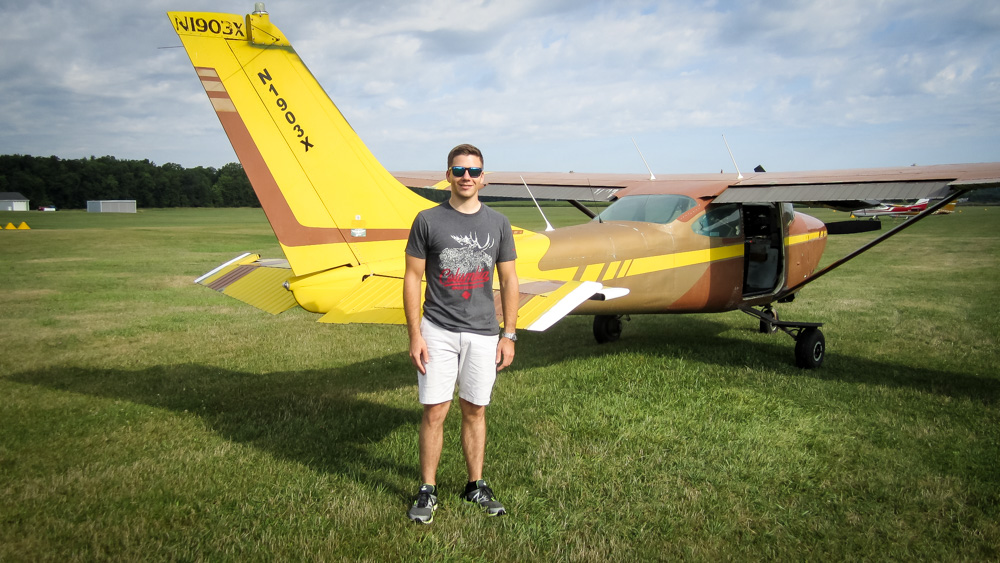 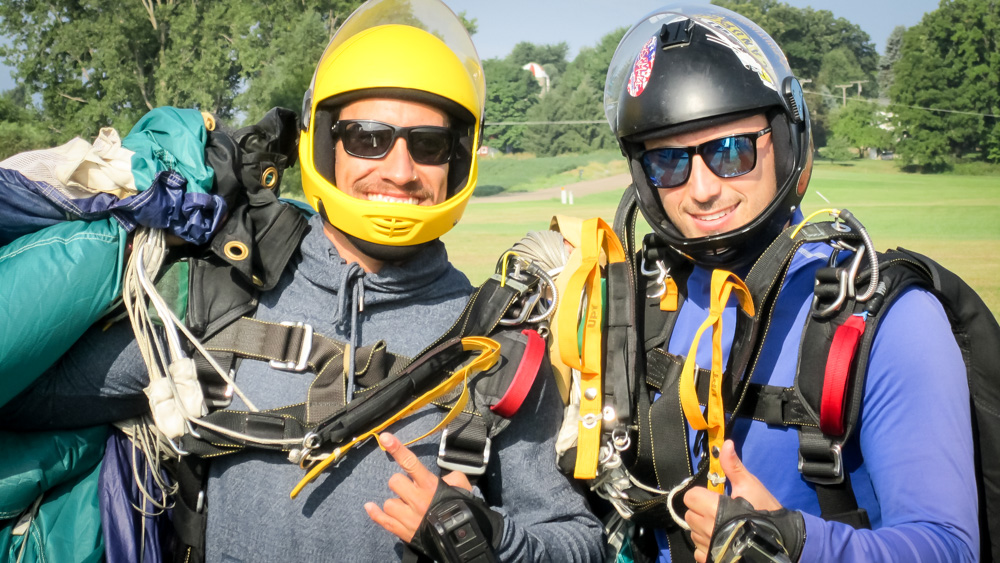 Instructors Angelo Garrido and Patrick Cserpak are ready to go! 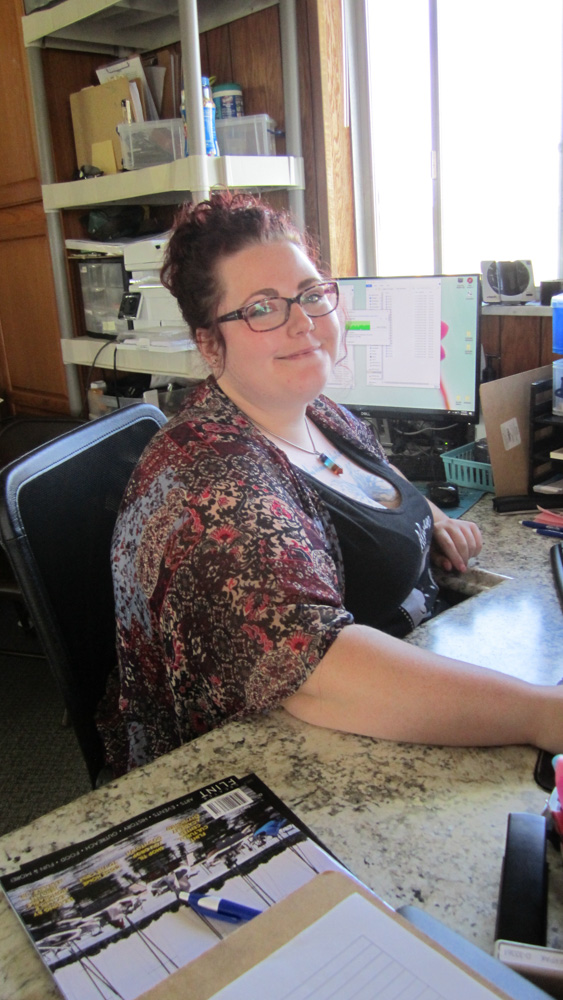 Sandy Johnson keeps it all organized. 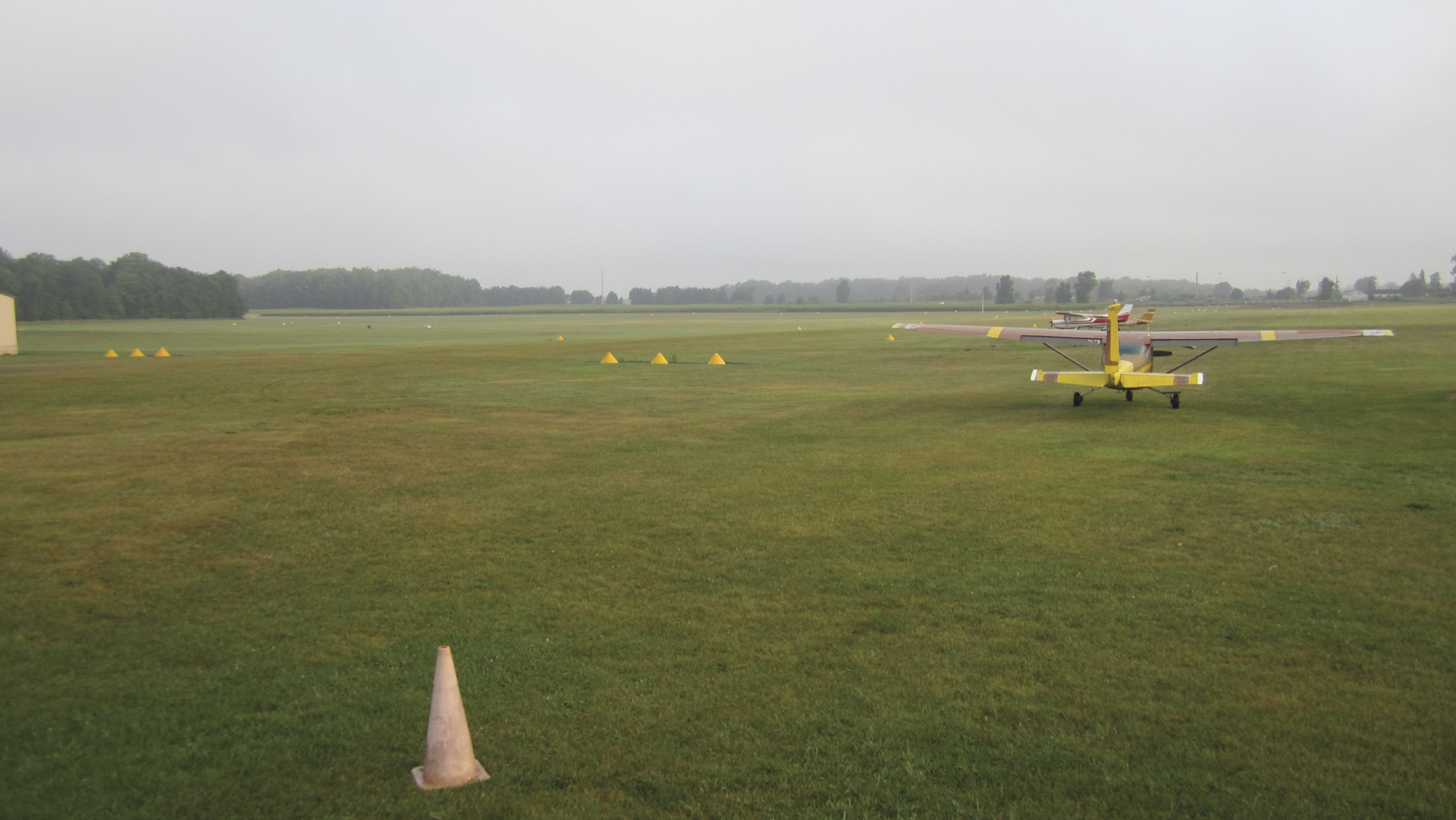 During our ascent to diving altitude, Patrick and Angelo focused on keeping Vince and I in the moment – not worrying about our decision to jump. They took pictures and videos, asked us questions and went over instructions. They kept us engaged in the experience and when it was time to jump, neither of us felt nervous or scared.

When we got to 10,000 feet, Angelo pushed the side door of the plane open. Immediately, wind and noise rushed in and buffeted us. As per our training, Vince maneuvered his feet out the door “Go, Vince! Go!” I yelled. After one mighty heave, Vince and Angelo were out the door – just like that! One second they were in the plane and the next, they were NOT. The reality of what I was doing finally hit me. Vince was gone – sucked out of an airplane at 10,000 feet with nothing but air between him and the ground … and I was next. It was at that moment (and only that moment, really) that I felt any sort of doubt. What am I doing? This isn’t natural. If man was meant to fly, we’d have been given wings! Gravity is not my friend! A million reasons not to jump flew through my head. I quickly put all those thoughts to rest, took a deep breath and thought, I’m here and I’m going to do this. 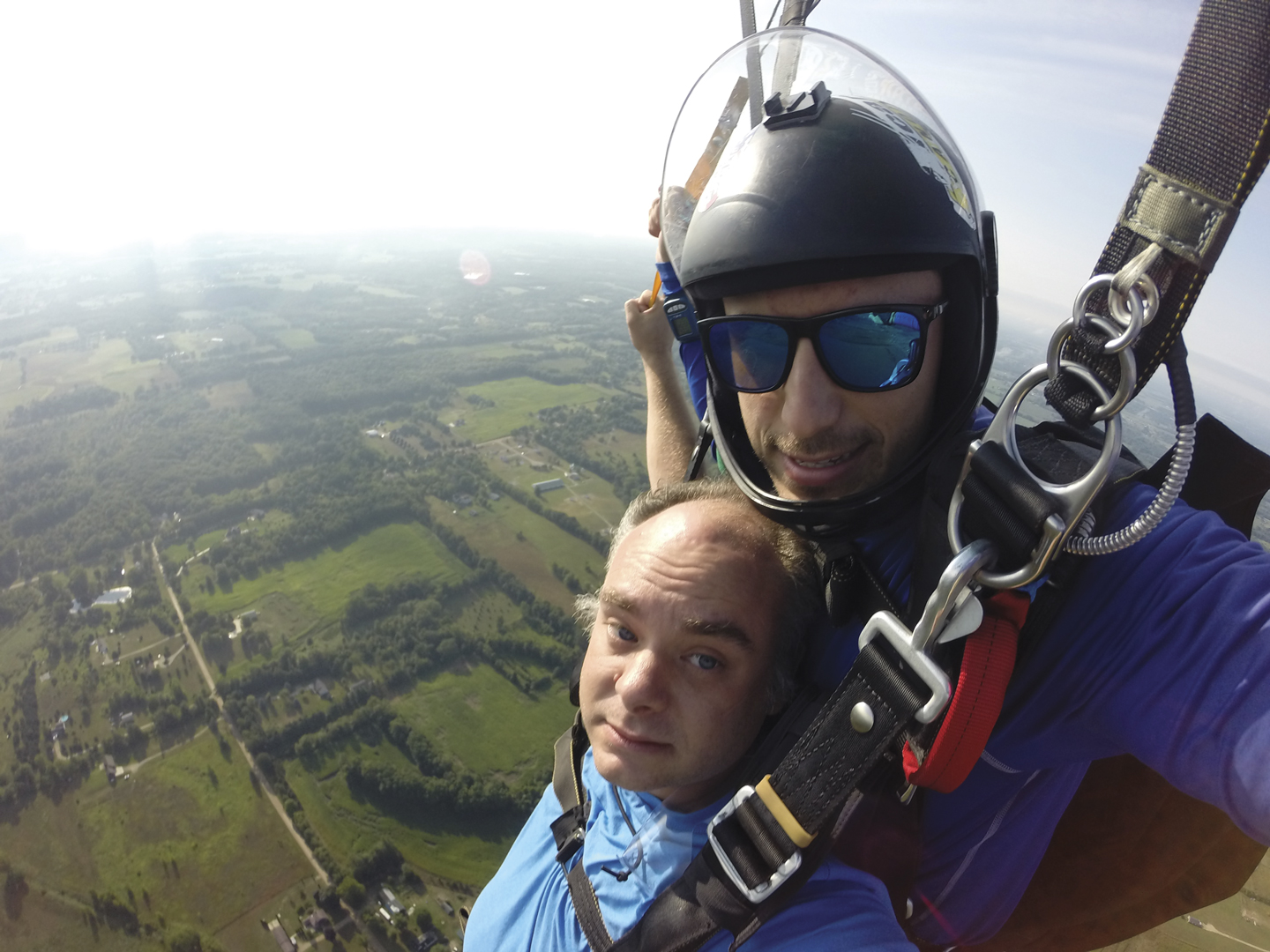 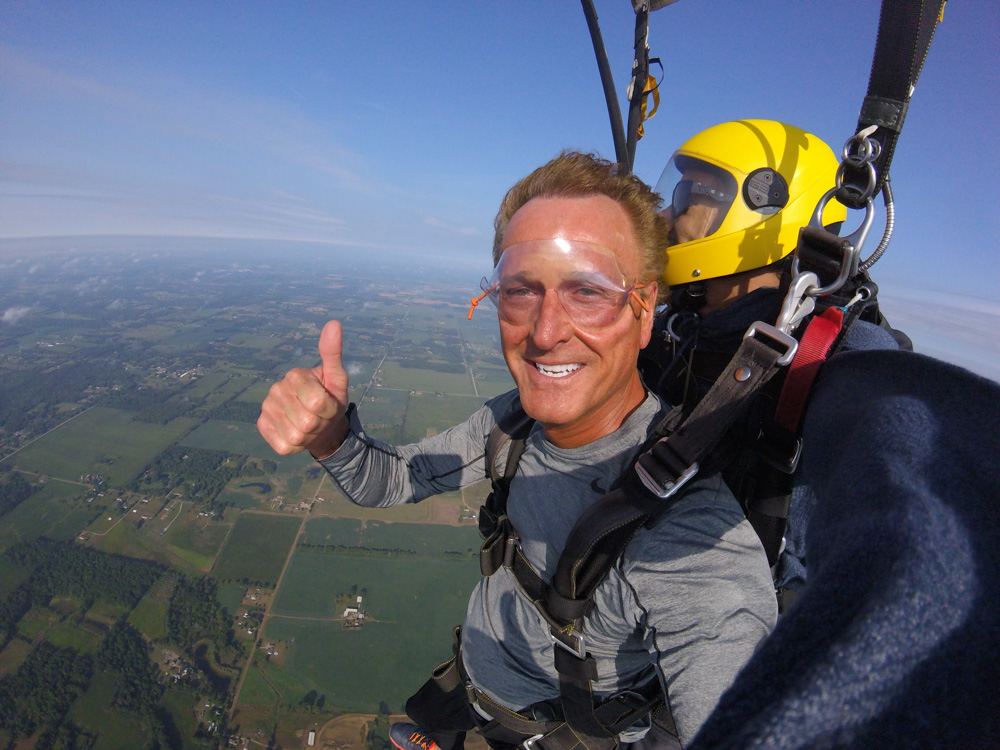 Patrick and I moved into position at the open door. I put my legs out. All I could hear was the roar of the plane’s engines, all I could feel was the wind trying to knock me back inside. It felt like chaos. I leaned back, gripped my harness as instructed, and Patrick pushed us out.

And it was amazing! Patrick and I were falling through the air – straight down at 130mph. When Patrick gave the signal (a shoulder-tap), I opened my arms and embraced the flight. There we were, a two-headed man-turtle screaming down into oblivion. And it was fantastic! I can tell you that it’s impossible to be scared during freefall – you just don’t have time to be. You are moving so fast and there is so much happening that you are forced to live in the moment. For 30 seconds, existence is simply the wind, the sky, the earth and you – nothing else. It’s something that must be experienced to truly be understood. 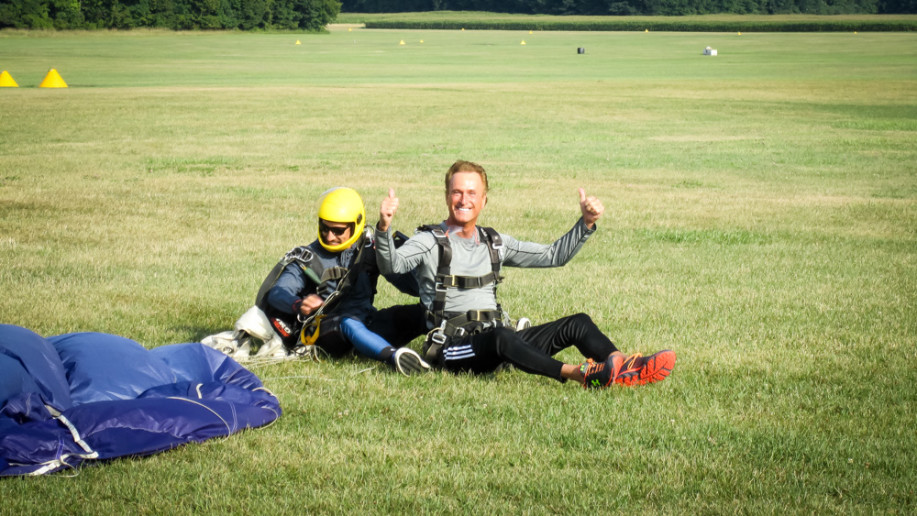 “It was absolutely amazing! This will definitely be
the first of many for me.”
Vince Lorraine, MCM Publisher

Suddenly, Patrick pulled the ripcord and I was launched up into a standing position. Chaos became peace. The parachute was open above us. The world slowed down and showed its beauty. I remember looking down at my feet and envisioning that with four large steps, I could cover miles. A million artists in a million years could never show in any work of art the beauty and peace I realized floating slowly above the earth. It was breathtaking. After a minute or so, I noticed that I hadn’t seen Vince’s parachute yet.

“Where’s Vince?” I asked Patrick. He pointed below us, and I could see Vince drifting down toward the landing zone. Good. He made it, too. 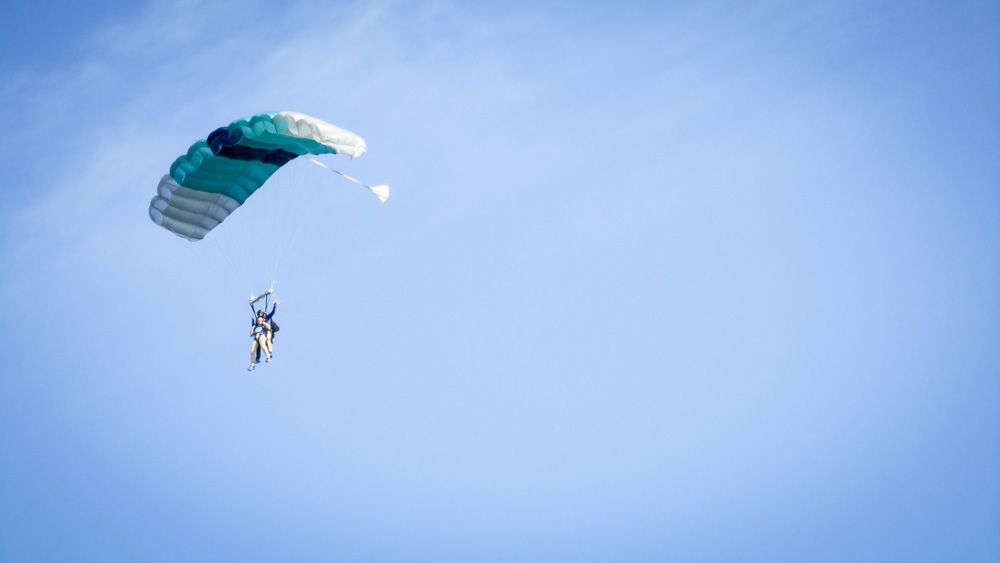 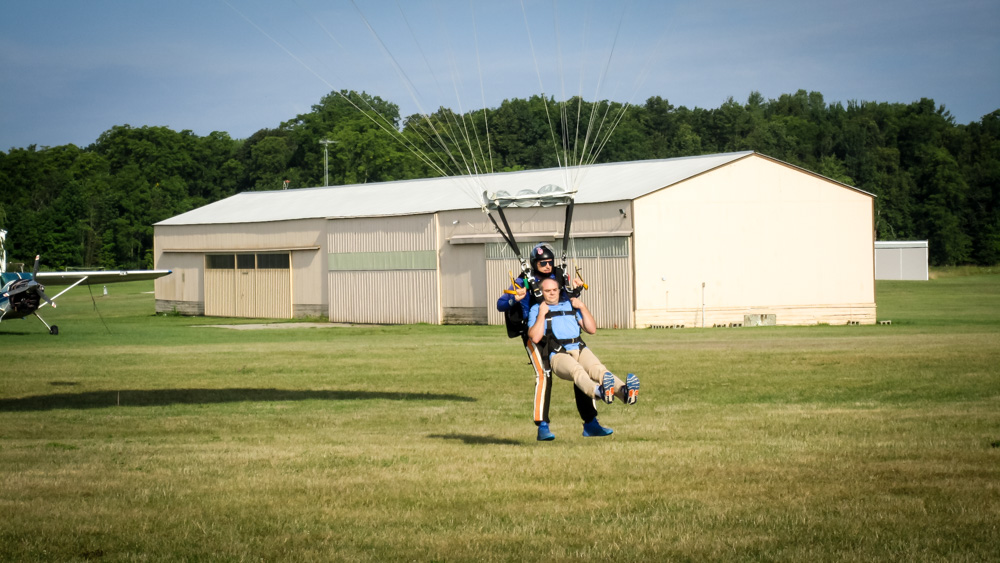 We drifted for a while longer and then, Patrick showed me how the parachute controls worked. He let me “drive” for a bit. Eventually, he took control again and we began our focused descent to the landing zone. We came in fast – I lifted my legs up per our training and we were down, smooth as butter. I was speechless at landing. Vince gave me a solid “WOOOHOOO!” to make up for it. Patrick unhooked and helped me out of the harness. I did it! Vince did it! Check it off the list! We actually, jumped from an airplane. I still can’t believe it and wonder if I ever will. 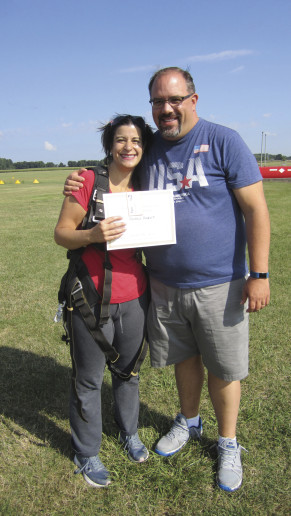 State Senator Jim Ananich was proud of his wife, Andrea, who conquered a fear of heights with her jump that day.

On the ground, a crowd watched as we landed, waiting their turns. Vince was beaming. He relived his experience with those preparing to jump and their excitement grew. As we waited for our photos and video from the jump, Vince started chatting with the woman who was next in line. She was having doubts, but Vince told her how glad he was that he had done it. She explained that she has a fear of heights, but what she didn’t know was that Vince is also acrophobic. “You won’t even notice how high you are,” he told her. “You don’t have time to think and then, it’s so peaceful that you won’t be afraid.” She decided to do it and we stayed to watch her. She conquered her fear and loved every minute of her experience.

I was so impressed with the team at Capital City Skydiving. They were professional and courteous. Instructors Patrick Cserpak and Angelo Garrido, pilot Nicholas Banwart, and Sandy Johnson at the front desk are simply the best at what they do. I trusted them with my life and would do so again. Looking back, I’m amazed that I was never truly nervous or scared (okay, maybe for a sec) and I have the instructors to thank for that. Even after 10,000 jumps, they seem to still enjoy sharing the experience with others.

As long as you are physically able, I recommend strapping yourself in and letting yourself go at least once. You can conquer your fear, prove it to yourself. You’ll never regret it and you will have yourself quite a story to tell.

Thanks again to Capital City Skydiving. It was a blast.

Man, I still can’t believe I DID that! 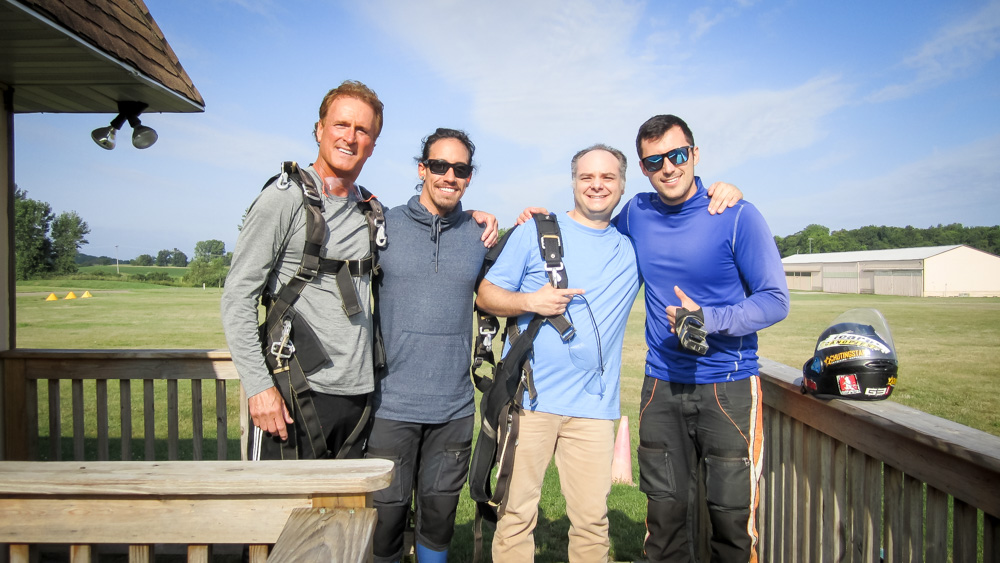