There are many “hidden gems” in Greater Flint, but the Chester H. Wilson Geology Museum, located in the Gorman Science Center at Mott Community College, is a true hidden gem – literally. The museum houses approximately 2,000 minerals, gems, rock collections and fossils from all over the world.

The museum got its humble start in 1959 with just a few displays constructed by Ben Moulton, a faculty member, according to Sheila Swyrtek, Geology Professor and Museum Director. But it was Chester Wilson, an MCC professor, who expanded it into a real museum when he was appointed director in 1969. “He’s the one who built it into what it became,” says Swyrtek. The museum expansion was made possible by contributions from many organizations and individuals, including the Flint Rock and Gem Club, the Michigan Geology & Gem Craft Society, and the Student Geology Club. Wilson contributed many of his own personal specimens that he accumulated throughout his career. It was named in his honor in 1991. 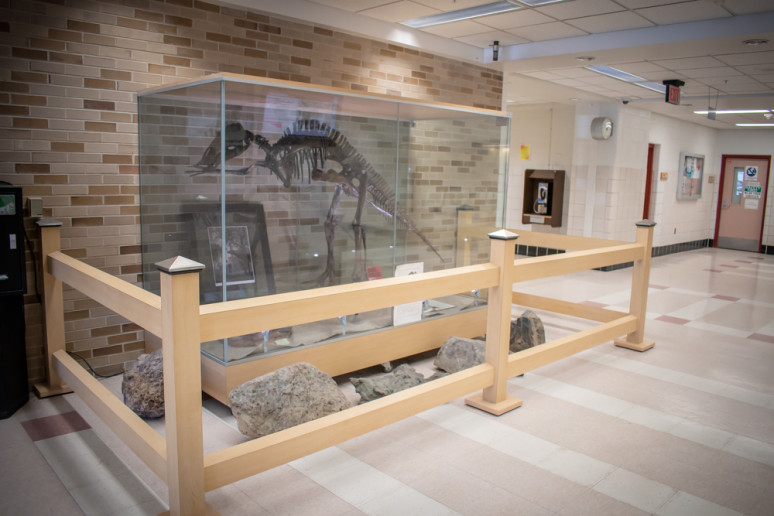 Visitors to the gorman science center are greeted by the skeleton of a 6-7-foot long duck-billed dinosaur.

The geology museum has undergone many renovations over the years. In 1995, the Gorman Science Center was gutted for a complete renovation and the museum was dismantled and packed away. Wilson had retired and it was up to Professor Swyrtek, who became the new museum director, to reassemble it.

According to Swyrtek, the jewel of the collection is an exceptionally well-preserved Columbian mammoth skull and tusks. The bones were discovered in 1962 on the farm of Stanley Barkowski near Lennon (Clayton Township) by steam shovel operator, Joe Heystek. “The farmer was having a pond dug and called to say they had discovered some big bones,” the director explains. “Most universities contacted assumed it was a mastodon, which is more common to the Michigan area.” Zoology Professor George Buck and some students spent three days salvaging the bones. “When they found out the bones were actually from a rarer mammoth, they were very excited!” Swyrtek exclaims. “Daniel Fisher, a world-renowned mammoth and mastodon expert, reconstructed of one of the tusks for us when he examined the remains.”

Also on display is a collection of mastodon bones found locally in the 70s, and a huge megalodon shark tooth, which was donated by a student. “It was from a shark that could have been up to 60 feet long, five million years ago,” reports the director.”That is one shark I wouldn’t want to meet.” 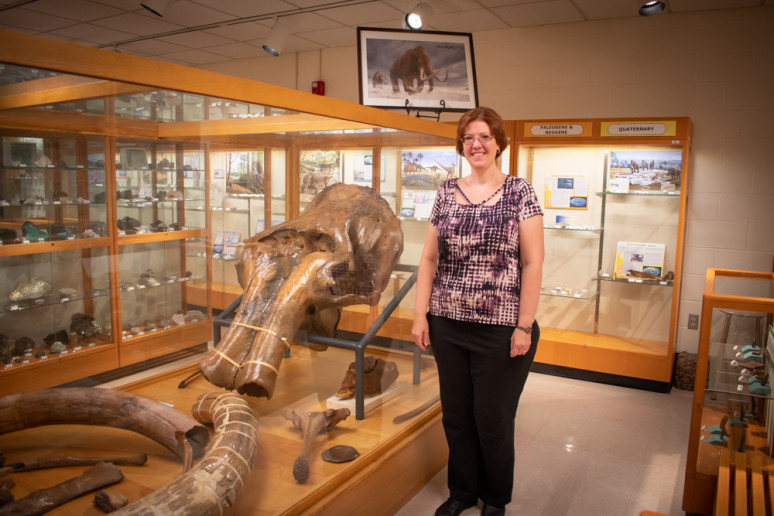 There is also a collection of Michigan’s beloved Petoskey stones which are actually a type of fossil corral. Rocks exhibited include Sedimentary, Metamorphic and Igneous (which are volcanic, cooled from magma). The museum houses mineral collections from around the world, including South America, Mexico, opals from Australia and emeralds from Brazil and Columbia. Another notable display is an original George Sternberg Mosasaur (large marine reptile) mount, and an earthquake display which shows current earthquakes from around the world in real time. But the first display you see when walking into the Gorman Science Center is a six-to-seven-foot-long, juvenile duck-billed dinosaur.

Chester H. Wilson Geology Museum is open to the public during MCC’s fall and winter semesters and is available by appointment in the spring and summer. Students taking physical geology and physical science courses have access to the collection and the goal of the museum is that both students and the community can enjoy the wide variety of earth science materials on display. “It’s a wonderful collection,” says Swyrtek. “In this area, there aren’t many collections like this. We love to have people come and see it.” 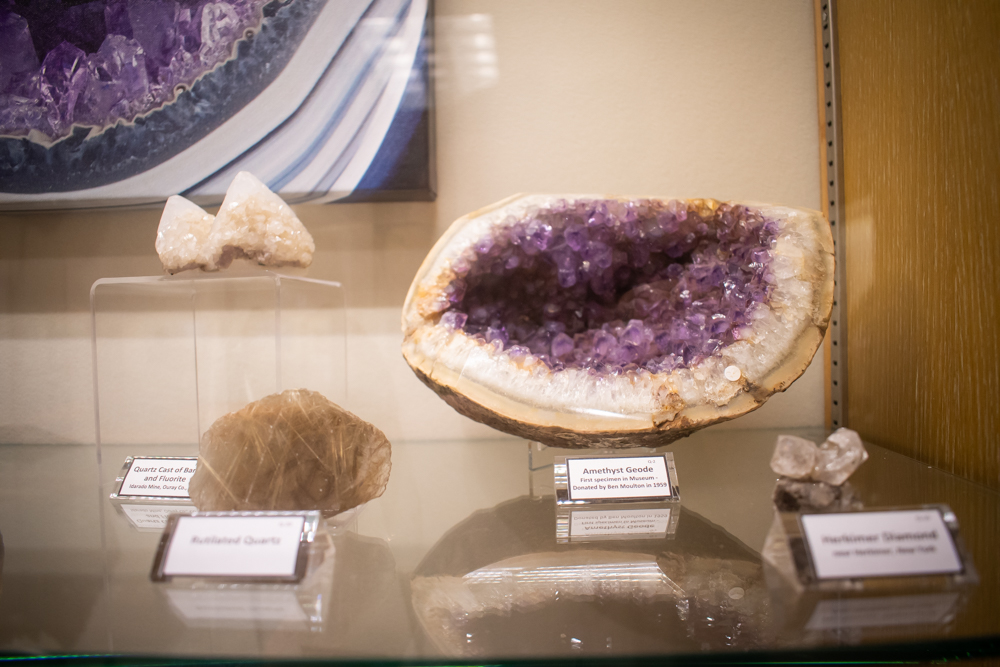 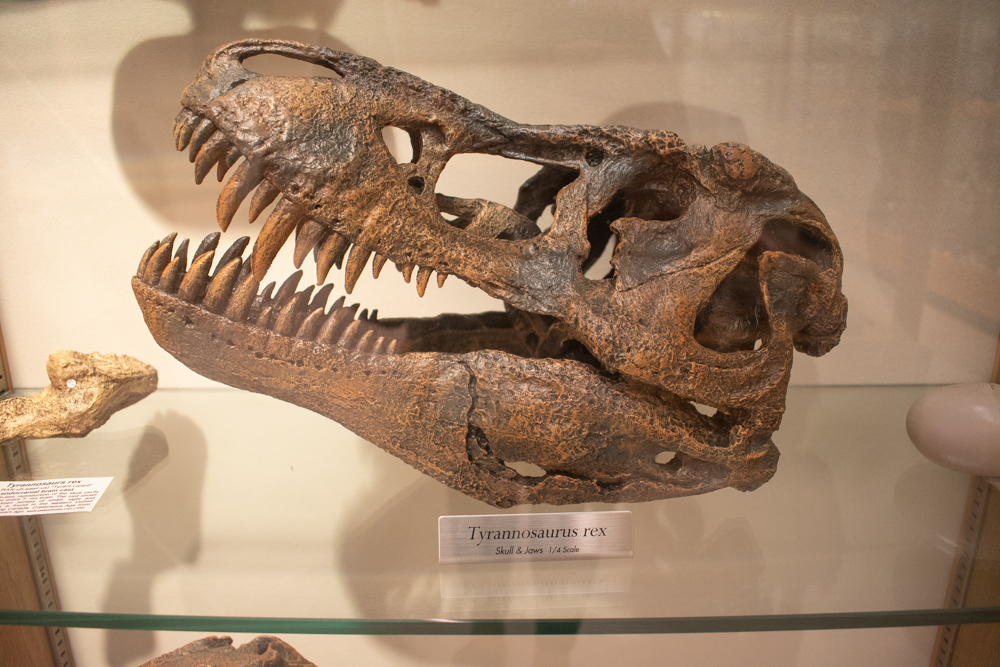 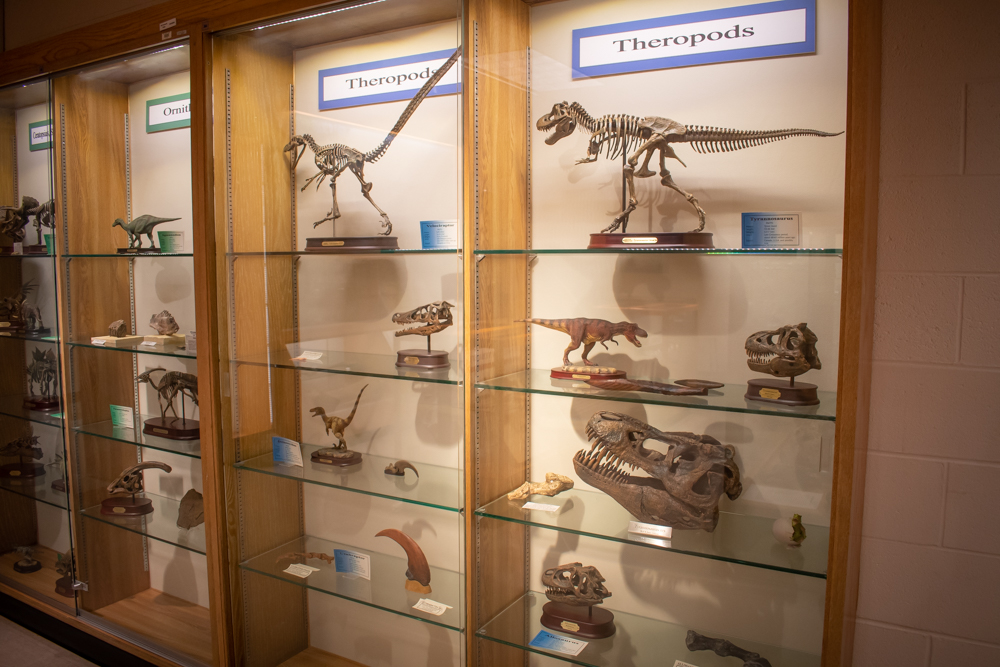 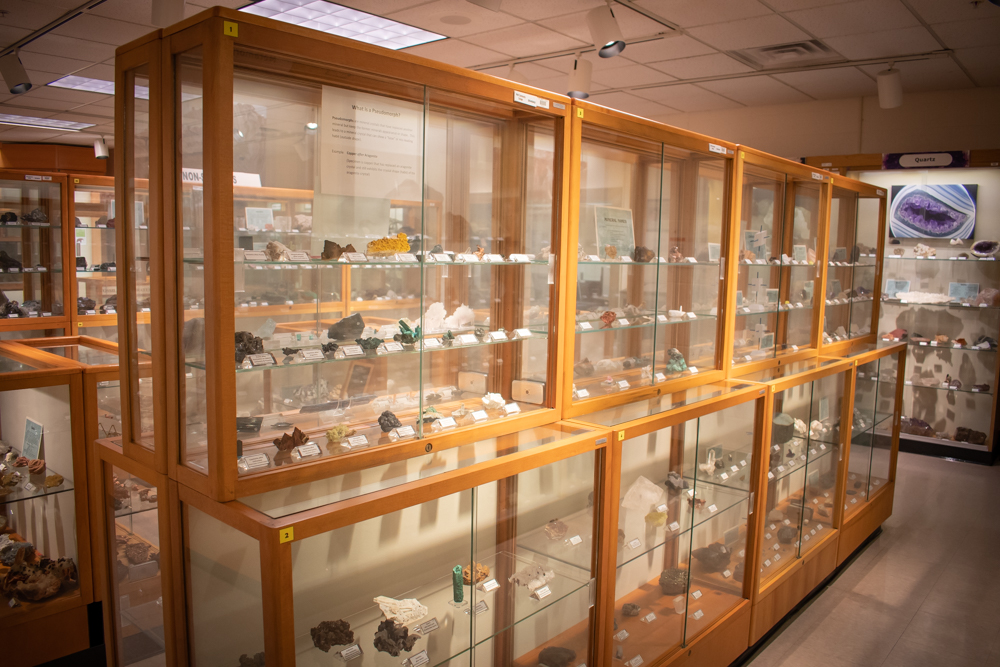