In 1941, the Nazi war machine invaded Ukraine. Millions of Ukrainian citizens were either killed or taken prisoner and forced to work as slaves in the German war effort. Anton and Stefania Hanczaryk were swept up in the German occupation and captured, their lives dependant upon fate and good fortune. They were extremely lucky to survive the war and in 1952, Anton, Stefania and their son, Micheil, found their way to the United States to begin a life of peace and freedom.

Written by Dr. Micheil Hanczaryk, Our Sacred Treasure: My Thoughts details the experiences of Anton and Stefania during the war years in Ukraine and beyond. It is an amazing and thought-provoking story of heroism and courage in the face of frightening atrocity. “It took me many decades to be able to appreciate what they went through. It’s very hard to wrap my mind around their experiences,” says Hanczaryk. “This story is not just about my parents. It is the story of the whole Ukrainian community – the whole nation of Ukraine. My parents were just two out of millions who were affected by WW2, by the Russians, Stalin and so forth.” 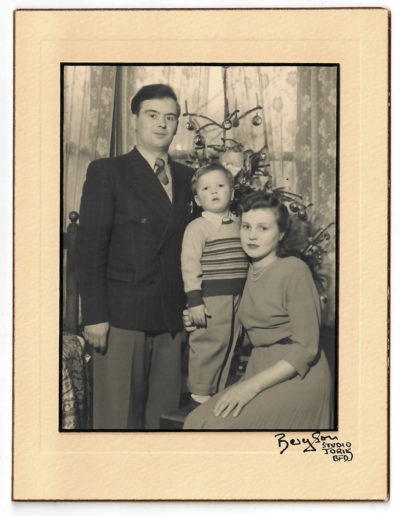 During the Nazi invasion, in a small village west of Lviv, young Stefania Litnianska, at age 15, was captured and forced into slave labor. “The men were busy fighting the war and they had nobody to work in the home country, so they invaded other lands. Every family of an occupied town was forced to give up one child of a certain age to send back to Germany,” explains Hanczaryk. “In the book, I share my mother’s experience of being pushed into a cattle car where she had to deal with close quarters, little food and no waste facilities.” During a stop, young Stefania was able to escape from that cattle car by fording the small river that ran through town. With the help of many kind souls, she and her friend, Nadia, managed to find their way back to Lviv. Unfortunately, when the Germans were forced back through the village by the Russian army, she was recaptured. That time, she would not escape.

Stefania found herself at a German labor camp in Straus Hoff, Austria. “She told me of the summer day when she arrived,” tells her son, Micheil. “It was a beautiful, sunny day, however when she looked around, everything was covered in a white powder. To her, it looked like snow. We now know, of course, that it was ash from a crematorium.” The labor camp housing happened to be in close proximity to a concentration camp. From the book:

The first thing the Germans did was to disinfect and delouse everyone. They forced men, women and the young to strip totally nude in the open. She [Stefania] was in shock and almost had to be physically undressed. Next, while totally nude, they were forced to parade around in view of their captors to see if they were fit for work. The fit were instructed to go to the right and the less fortunate souls were herded off to the left, never to be seen again.

After toiling for months in the labor camp, Stefania was chosen to work at a farm near Bamberg. Fortunate to be chosen by a wonderful, kind and respectful family, she farmed for the rest of the war in quiet. In 1946, at Tabire work camp, she met Anton Hanczaryk and a year later, they were married. 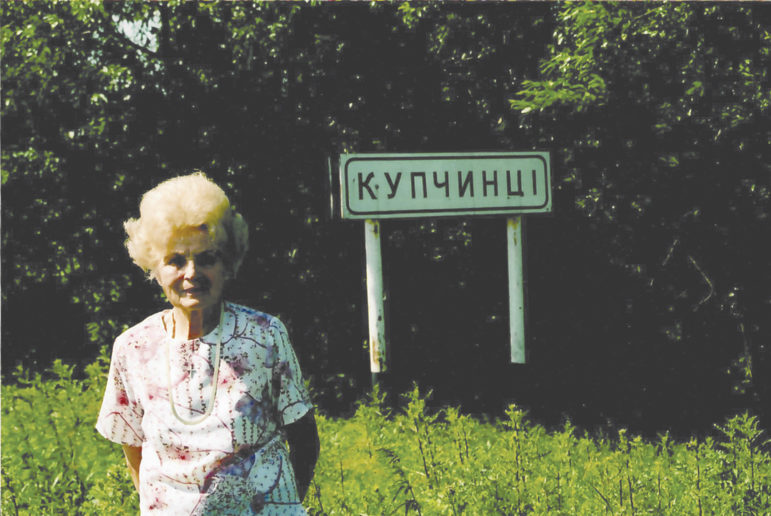 Stefania at her childhood village, 2007.

In 2007, Dr. Micheil Hanczaryk, his family and his mother traveled back to Ukraine. “The best part, which was very emotional for me, was visiting my mother’s village and seeing the river she had to swim across to escape the Germans. I sat on the bridge there, just trying to imagine what it must have been like to leave home at 15 years old. I was trying to imagine being that age and knowing that you would probably never see your family or parents again,” remembers Hanczaryk. “I just can’t imagine it.”

For Anton, however, the danger did not end at Tabire. “My father was a partisan – a freedom fighter,” says Micheil. It was customary for those in post-war camps to be sent back to their home country. However, Ukraine was held by the Russians and if Anton was sent home, he may have been tortured or killed due to the extent of his involvement while fighting for Ukraine. Micheil, for many years, did not know the level of his father’s immersion in the war. While growing up in the U.S., the adults were very secretive about their past when kids were around. What he knows of his father, he overheard on accident. “In church, I sat next to, without knowing, the second in command of the Ukrainian army. I thought he was just an average guy who worked at General Motors with my father,” remembers Micheil. “These men were truly a band of brothers. They fought for the freedom of Ukraine.”

Eventually, Anton and Stefania made their way to England where they spent five years on a work permit. It was there that Micheil was born. Stefania had family in the U.S. and was sponsored by her great aunt. The Hanczaryks were able to book passage on the Queen Mary and, after years of work, turmoil and strife, Anton and Stefania touched ground in the United States. They found their way to Flint, Michigan, with young Micheil in tow, to live their lives in peace. Micheil remembers a little about the trip across the ocean. “At four years old, it’s more stories than memories. I remember that there was a rocking horse on the boat in the nursery. I spent all of my time during the trip on that rocking horse,” he says. Several years ago, his family toured the Queen Mary, which is permanently harbored in Long Beach, California. “In the nursery, there was a rocking horse. It may not be the original rocking horse, but one was there and it meant a lot to me.”

The story of Anton and Stefania Hanczaryk is uplifting and of great pride to Micheil. The book, however, is meant to be much more than that. “I had two purposes for writing it,” he states. “One is to pass down the lineage and history of our family, so that future generations will know where we come from. The second was to re-ignite people’s awareness of what has happened and what is happening now in Ukraine.” 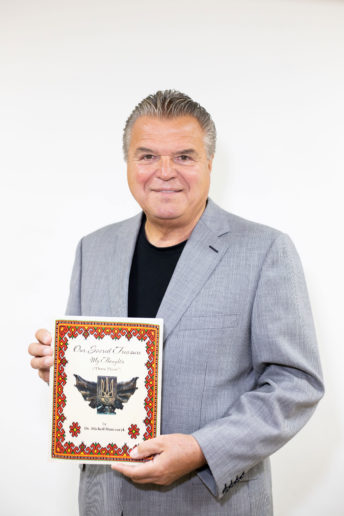 “My father would say that history repeats itself, so we must be vigilant to keep freedom’s light burning brightly. Be thankful and grateful for what you have, and don’t take it for granted.”

In his book, Micheil provides a brief, yet traumatic history of the peoples of Ukraine. “Ukraine was a valuable asset. It was considered to be the bread basket of Europe and the country held the only warm port on the Black Sea. It was always sought-after land. The partisans of Ukraine (including my father) were always fighting for their freedom,” says Micheil.

The book states that history repeats itself and the current state of Eastern Ukraine sadly proves the statement true. “President Putin just recently took over Crimea, which is part of Ukraine,” states Micheil. “Putin is using the exact same three reasons that Hitler used when he invaded Europe, and it’s no big secret, if you are an active observer of world politics, that Putin is pushing to reform the old Soviet Union. Once again, a part of Ukraine has been taken over and conquered. Once again, Ukrainians are being murdered and decimated. This is the first time since WW2 that a sovereign nation has been invaded and lands captured. Over 12 million Ukrainians were killed during World War 2. How many is enough? I’m just trying, in my own small way, to wake people up and get them to realize what is going on. People who have read the book admit that they had no idea about the plight of Ukraine. People don’t study history until it affects them and when that happens, it’s a little too late. It’s already happened and now, you’re fighting for your life.” He tells of a time when his parents would tell him that what they experienced could happen in the United States. As a young man, he didn’t believe them; but he’s no longer so sure. “We are losing some of our freedoms right now. Things got twisted by Hitler in WW2 – he twisted it against foreigners. Now, you are hearing the same thing. It always seems to be someone else,” cautions Micheil. “You have to be aware and be involved. One of the greatest freedoms we have is the freedom to vote and let our voices be heard. In other parts of the world, you have no voice.” 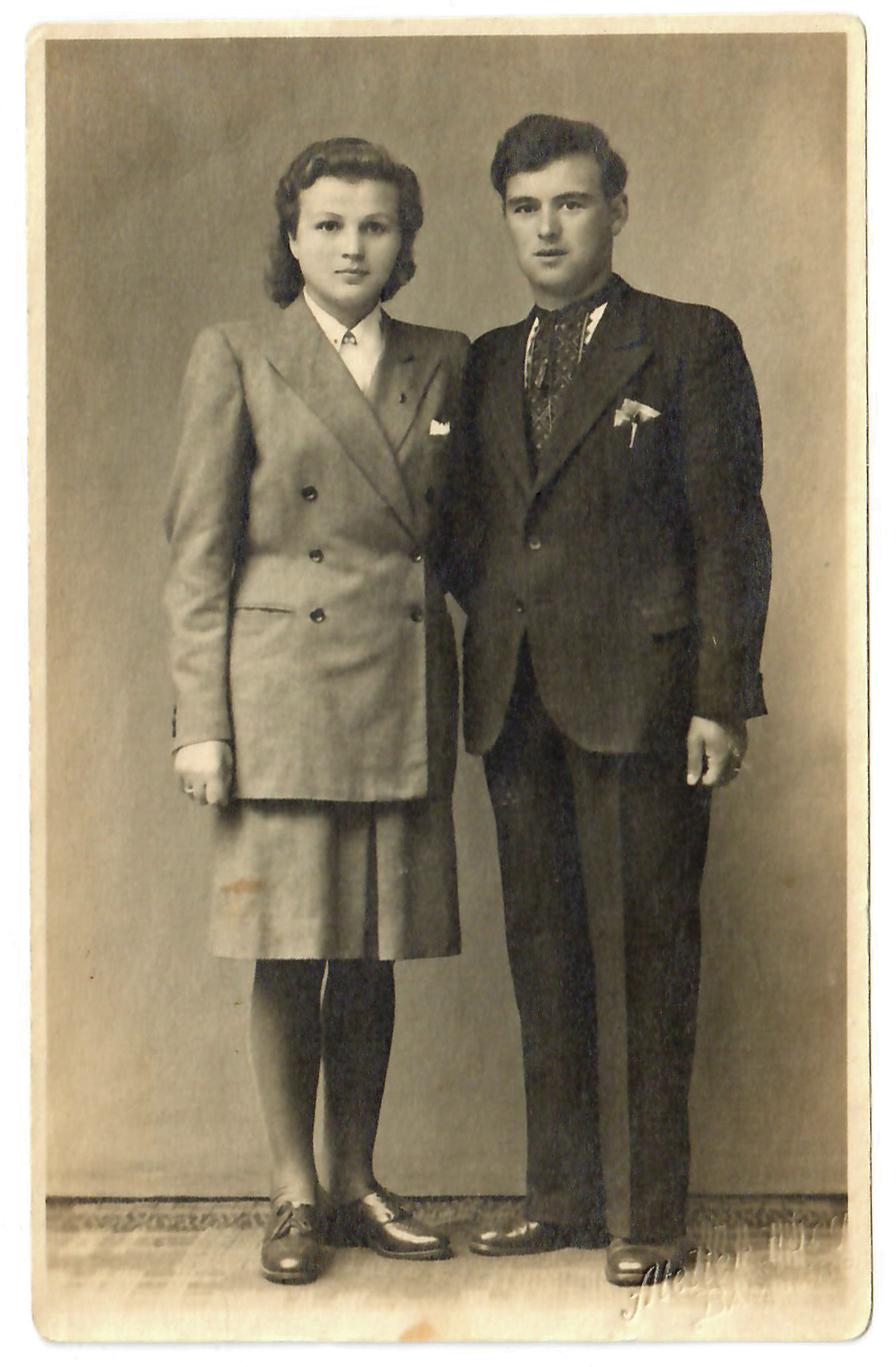 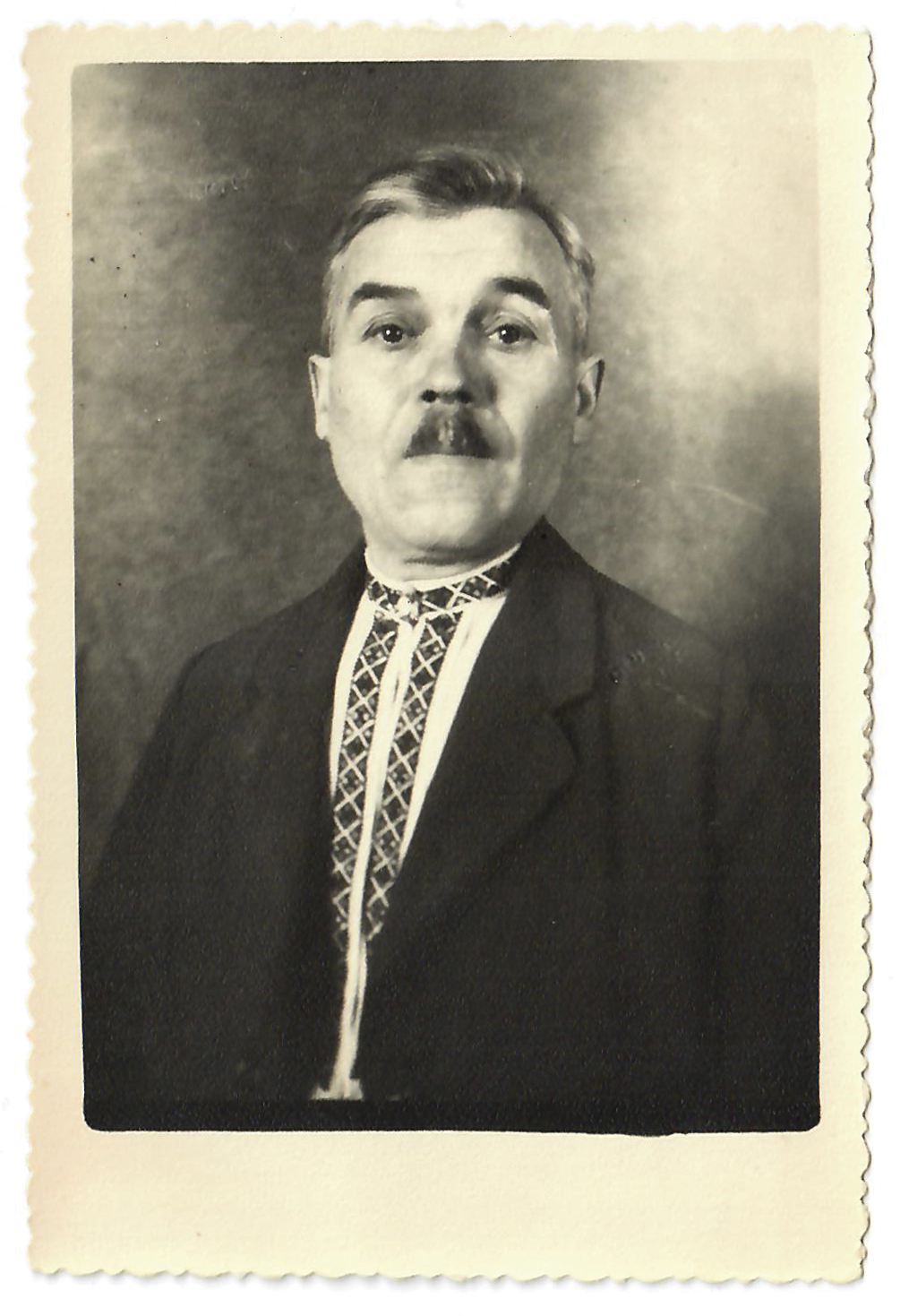 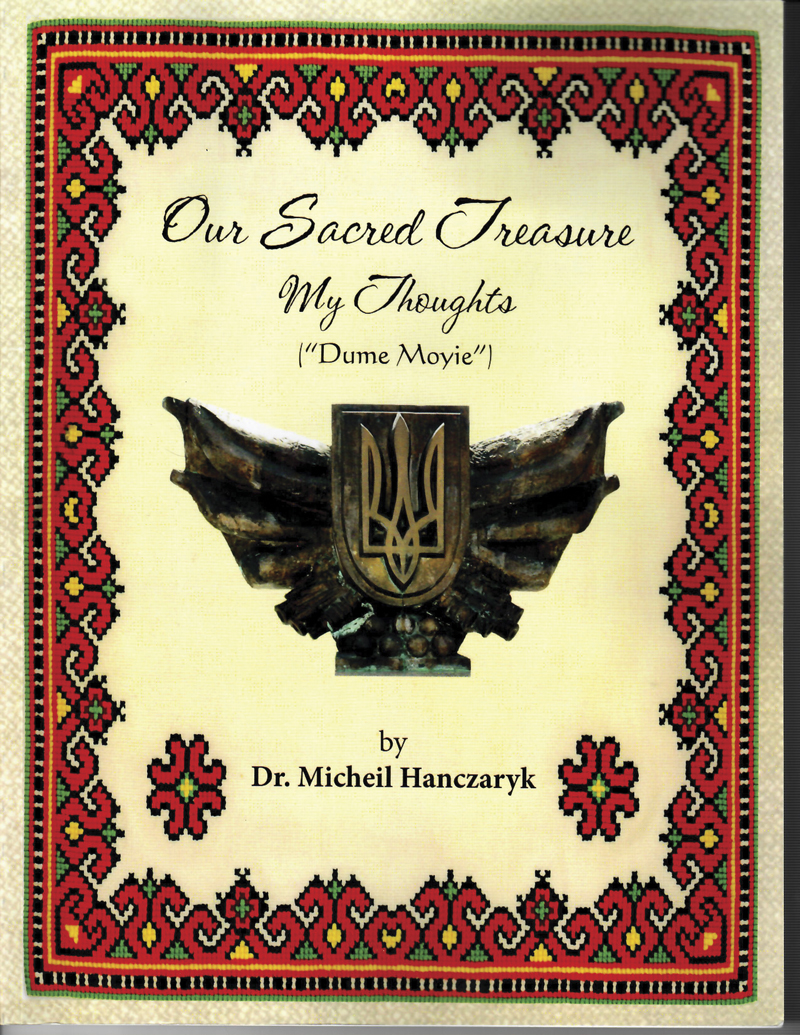 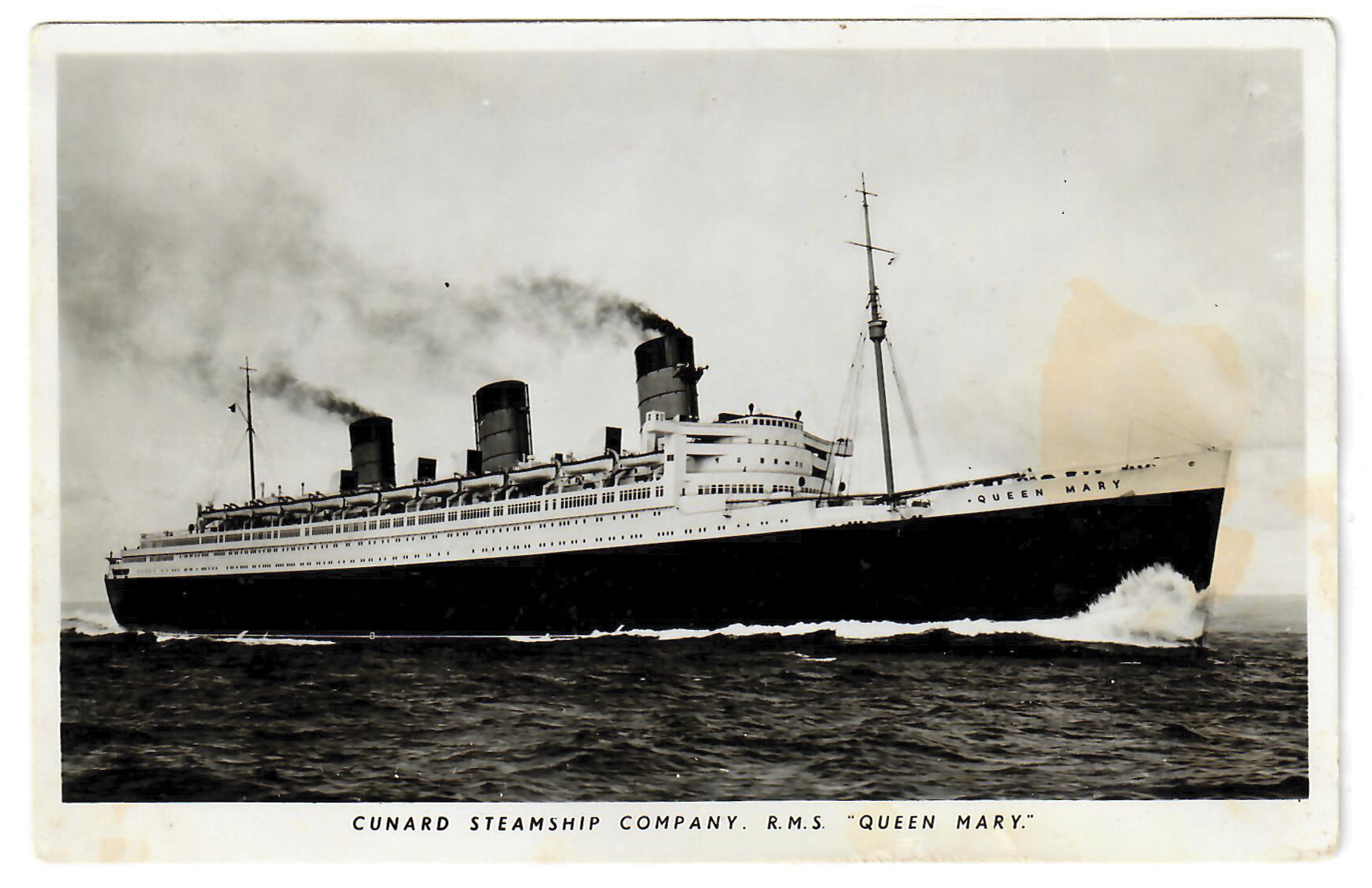 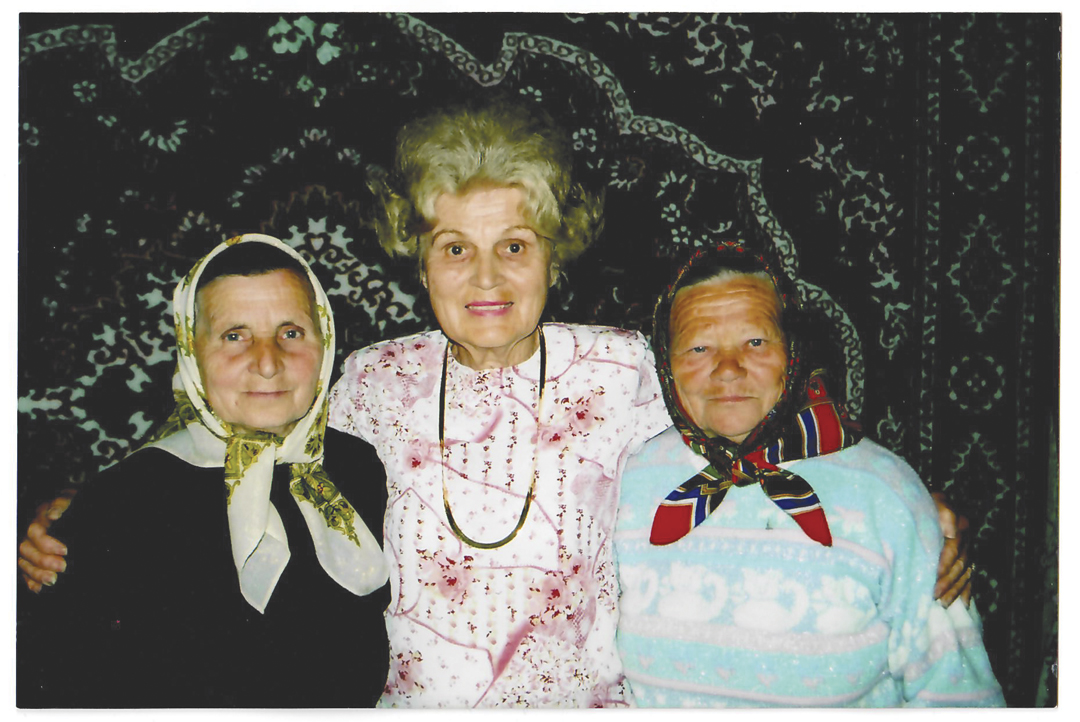 The book is called Dume Moyie, meaning “my thoughts” or “my treasures.” Micheil’s grandparents told his mother when she was being taken from them that they were leaving her with a sacred treasure. It wasn’t until she was held captive in the labor camp that she realized what that meant. The treasures were: belief in God and church, belief in your family, and never forget who you are – you are Ukrainian. Anton and Stefania believed that as long as you keep those sacred treasures, they will be your guiding star throughout life, and they clung to that belief.

“Today, I think my father would say exactly what he said from the time we first landed in New York. He was so proud to be a Ukrainian-American and he believed that this is the greatest country in the world. It’s too bad that many Americans don’t realize what they have. While this country has its problems, they pale in comparison to what people have to endure elsewhere. There are inequalities here, but everyone has the opportunity to seek and become whatever their heart desires. You have the right to choose,” explains Hanczaryk. “My father would say that history repeats itself, so we must be vigilant to keep freedom’s light burning brightly. Be thankful and grateful for what you have, and don’t take it for granted.”