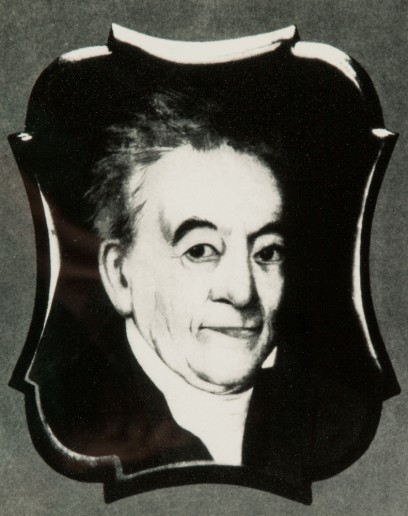 One of Flint’s early pioneers was an American Revolutionary War veteran named Jonathan Beach. Beach Street in Downtown Flint is assumed to have been named after Jonathan Beach or the Beach family. His story begins out East in Goshen, Connecticut where he was born around October 1760 or 1761, the son of Deacon Edmund and Mary Deming Beach. He grew up to become a successful blacksmith and later, a farmer. The blacksmith trade was vital during the Revolution, providing necessary cannons, weaponry, horseshoes and hobnails for troop boots. According to military records, Beach served in Col. Sheldon’s 6th Brigade in 1780 and in Gen. Waterbury’s State Brigade in 1781, and he was also an aide to General George Washington for a period of time.

After the war, Jonathan Beach married Lucy Baldwin and, according to a genealogical record, they raised a large family of 11 children in Mt. Morris, New York. His father was a church deacon, and faith was also a central part of Jonathan’s life. A Mt. Morris, New York centennial record references Jonathan Beach as one of a group of men who organized the First Presbyterian Church there in August of 1814, also acting as one of the first deacons of that church. After the death of his wife Lucy, he married Martha Buckingham in 1823.

In 1825, the opening of the Erie Canal began to draw mobs of easterners to unmarked properties in the Midwest where they worked their way into the wilds of Ohio, Michigan and Indiana, making new settlements. Jonathan Beach was in his 70s when he and members of his family made their way to Michigan in approximately 1835, two years before Michigan was granted statehood.

Records indicate that the Beaches lived on the Todd farm, a farmhouse and log tavern that stood near the banks of the Flint River. Congregationalists, Presbyterians and others were populating the area and, according to a sesquicentennial book of the First Presbyterian Church of Flint, Jonathan Beach was one of 17 pioneers who gathered together on the banks of the Flint River in 1837 to form an organized religious society, signing their names to the charter of the First Presbyterian Church. His wife Martha and his son Wait and daughter-in-law Eunice were also charter members. Harlow Beach was the first clerk of the church, and he elegantly recorded in a deerskin-encased church record book the names of Jonathan Beach (writing a variant spelling “Johnathan”), his wife Martha and several others who initiated the First Presbyterian Church. Rev. John Beach, a cousin of Jonathan Beach, arrived from Ann Arbor in 1838 to lead the Flint church until 1841.

Jonathan Beach died in 1850 in Genesee County. He and his wife Martha were buried in the Old Flint City Cemetery and later reinterred elsewhere as the city and streets further developed. Unfortunately, it is unknown exactly where their graves are located today. A marble headstone was erected in the Glenwood Cemetery in 2010 as a memorial to Jonathan Beach and to formally recognize his service to the country during the Revolution as well as to honor his contributions to the settlement of Flint in his later years.