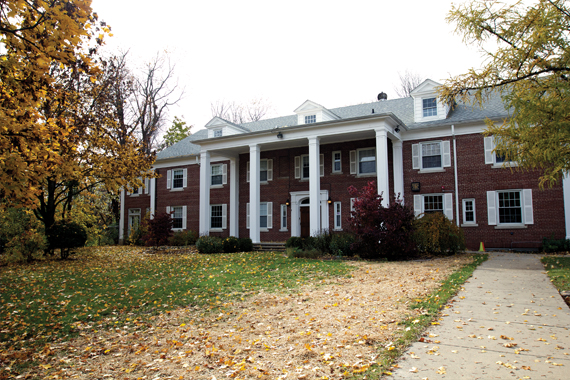 When you think of the homeless, what comes to mind? Do you envision a man with ragged clothes and a shopping cart filled with cans? Shelter of Flint knows that the faces of the homeless are much more diverse than that. “It’s not what pop culture makes it look like,” says Liz Ruediger, Director of Development at Shelter of Flint. “With the challenges of the economy, it really could be any one of us.” And just as there is more to homelessness than meets the eye, there is more to Shelter of Flint. “Our services extend far beyond a warming center or temporary lodging,” says Anne Grantner, Executive Director of Shelter of Flint. The program developed by Shelter of Flint is innovative and effective, and their long-term thinking has made this organization one of the most successful of its kind in the state.

Shelter of Flint defines homeless as living in a place unfit for habitation. “If your utilities are shut off in the winter, we would consider you homeless,” says Meg Sprecher, Development Assistant, “just as much as a person without a home, sleeping in their car or on the street.” Homelessness, then, is something far more pervasive than the public consciousness envisions; often it is manifested as the children of a single parent separated amongst family members’ houses while the parent sleeps on the couch of whoever is feeling generous that night. Shelter of Flint takes in, and frequently reunites, families of all sizes at their 30-day emergency facility. “The only people we cannot serve are single men and unaccompanied minors. We are the only Flint shelter that accepts single father families, and we’ve seen a dramatic rise in these cases,” reports Liz.

With their recent move into the Cedar Street building, Shelter of Flint is in the process of expanding the number of beds they offer in their emergency housing program to 70. Having been built as a home for orphans in 1928, the Cedar Street facility was designed for communal living, with several large living rooms and meeting rooms downstairs, and 12 bedrooms upstairs, making it ideal for the emergency shelter program. A large kitchen, pantry, cafeteria, laundry room, computer lab and elevator make the facility everything homey for every resident, including those with disabilities. “Our old building served us very well,” says Meg, “but this is home – home for us and home for our clients.” When the team first came to look at their new space, the culinary specialist fondly known as Miss Eddington cried when she saw the kitchen, which was nearly three times larger than the one in their previous building. When children moved into the new building on October 7, they were ecstatic to find playhouses and swing sets in the large backyard. “Despite the bumps in the road trying to move and get settled, it’s been a great ride,” Liz says of the change.

Emergency housing is not what makes Shelter of Flint so unique, however. Anne recognized that the causes of homelessness are often complex, necessitating a program longer than just 30 days. “Some of the people who come into the Shelter are in and out in 30 days,” she said. “These are people who may have experienced a sudden loss of income or had their utilities shut off. They need our support for a little while to gather their resources, but then they leave. For others, homelessness is the end result of deeper issues. They need more time to fight their battles.” For this reason, Shelter of Flint created a transitional program, in which people become residents of properties owned by the Shelter, where they live for up to 24 months. “They pay rent based on what they can afford,” Anne says proudly, “thereby providing them with both dignity and support while they get their lives back on track.”

Permanent supportive housing is the third, and Anne would say the most crucial, of all the services offered by Shelter of Flint. Provided to those who are homeless and disabled, permanent supportive housing is similar to the transitional housing in that residents pay rent based on their income as well as utilities, but their lease has no end date. “Most of the people in these facilities stay for the rest of their lives,” Anne reports. The idea for this program was brought to fruition in 2000, when Shelter of Flint formed the Rosewood Development Corporation. Through Rosewood Developments, the Shelter owns and manages 453 units of affordable and senior housing, where people can stay indefinitely. “We use a blended management style at the Rosewood Developments,” said Anne, “that has made this program incredibly successful. Piper Management Group works with Shelter of Flint caseworkers to support and ensure quality of life for those who would otherwise be destitute.” She reports happily, “Our success rate in the permanent support housing is 98 percent.” Anne says that the need for permanent supportive housing is growing. “The lack of affordable housing in our area has made it impossible for many people who are disabled to ever support themselves,” she said sadly, “and we’re looking to expand our number of developments in order to create homes for this demographic.”

Although the future is waiting to be shaped by Shelter of Flint, Meg has more pressing issues. Christmas is coming, and Meg calls this her favorite time of year because of the Shelter’s Adopt-A-Family program. “We ask our emergency residents to make a wish list of up to ten gifts that cost around $30 each, and we give the lists to donors who fulfill those wishes,” she says. Families differ in size and needs, and Meg works hard to make sure that anyone who arrives between November 1 and December 25 is provided with a nice Christmas. Donors are asked to shop for their adopted family, wrap the gifts, and deliver them to the Shelter. “It’s a lot of work, but that moment, when I hand a mother of five gifts for all of her children, is worth it. The relief and joy evident on their faces is priceless.” Meg knows there are a lot of great programs providing necessities during this time, but she says, “I encourage residents to put things on the list that their kids want. Toys are very important. For a child to have to go back to school after the holidays and answer the question, What did you get for Christmas? with ‘mittens and socks’ is heartbreaking. I just don’t want that for them.” Anne remembers the generosity of the community last year, and says, “I was flat-out shocked by the number of donors who brought Christmas to the Shelter last year.” Such an overflow of goodwill makes her hopeful that this year will be even better: “Some of the kids in the Shelter have never had such a wonderful Christmas as they have here,” she said feelingly, “and in our new building this year, we have a fireplace! The kids will be very relieved that Santa has someplace to enter.”

Ever a visionary, Anne is always looking for new ideas for how Shelter of Flint can change the lives of more people in Genesee County. “Our move to Cedar Street was three years in the making,” she said, “and no one thought it would ever happen. The Rosewood Developments is another project that everyone thought was crazy, but we did it and it has changed so many people’s lives. I am always looking for opportunities to change the game, and I think that is what makes Shelter of Flint so special.” Shelter of Flint is stopping the revolving door of homelessness that is prevalent at many shelters in the area. “The best outcome for a family that arrives in our emergency shelter,” Meg says, “is that this family never comes to our emergency shelter again. That means we’ve helped them solve the problems that led to their homelessness.” Anne seconded that statement by saying, “Shelter of Flint is not a sad place to work. We empower people; pushing them to take action and helping them find opportunities to make their lives better.”

Are you interested in purchasing photos from this story? Go HERE and select the “Shelter of Flint” category.