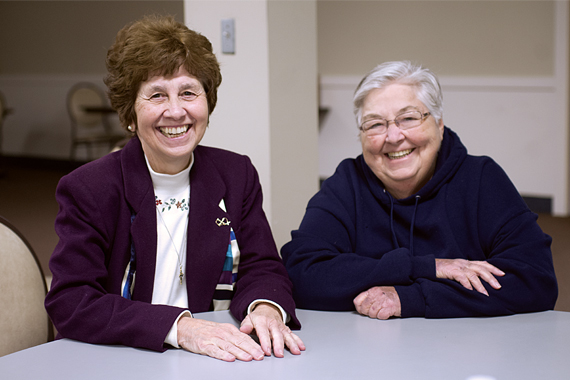 “And he that sat upon the throne said, Behold, I make all things new…” – Revelation 21:5

Even if you are not religious, you can appreciate the monastic order. Those who devote themselves to the Lord live a life of work and prayer, prayer and work: an endless cycle of discovery and practice. Sister Carol Weber and Sister Judy Blake from the former St. Luke Catholic Parish are two ladies whose faith has given an angelic glow to their countenances. While their prayer lives are certainly private, their work has become renowned in the north end of Flint for the way they’ve changed the fate of hundreds of men and women since 2002 through the N.E.W. Life Center.

The sisters’ devotion to the downtrodden predates the N.E.W. Life Center by a number of years. Sister Carol remembers vividly the occurrence that led to the founding of the Center. “We had been giving away food and essentials for about seven years from our base at the church,” she said, “and we encountered the plight of women in the north end in the most horrifying ways. One January day, a woman came to us for baby clothes, not for herself, but for a woman she was trying to help. This mother had given birth to her child alone in the bitter cold, in a nearby abandoned home. She was in the hospital, but couldn’t leave until she had clothing and other essentials for the baby. Thankfully, we were able to assist, but we came away from that experience thinking, We have to do more.”

So, they did. When the school building next door fell vacant, the sisters began the process to take their outreach efforts to the next level. “We asked the women who were coming to us for food what it was they needed. They listed three things: a safe place, encouragement and self-esteem improvement, and education.” Thus began the N.E.W. (North End Women) Life Center. Today, the rambling building on Lawndale Avenue houses five programs designed not only to meet needs, but to help people better their lives through self-empowerment, education and employment.

The premiere program was called New Life, an all-encompassing, three-year course designed specifically for area women, many of whom come off the street. The program is comprised of 23 elements, including nutrition, fitness, domestic violence prevention and peer counseling, as well as employment training in sewing, knitting and quilting. The first graduating ‘class’ included 12 women, all of whom had originally come to the Food Pantry at the Center. They were able to use their newly acquired skills to contribute to their families’ financial stability.

“At first, women who completed the New Life program found employment as seamstresses,” Carol recalls, “but the economy went sour and our women could not find work. We discovered that there is a huge local market for sewn medical goods – scrubs, robes (that do not open in the back), lab coats and even lanyards – and that knowledge, coupled with the employment needs of our women, prompted us to go into business for ourselves.” New Life Enterprises, as the business was named, is now critical to the success of the New Life program, as it provides an employment opportunity to the women who complete their training at the Center.

Currently, New Life Enterprises employs 26 women, many of whom are graduates of the New Life program or the New Paths program, which helps those with criminal backgrounds reintegrate into society. Jessie Cummings is a graduate of the New Life program, and her story is one to which many women in the north end can relate. As a woman from a bad marriage who struggled with depression, she remembers how her two daughters encouraged her to check out the program, and how she avoided it. “I just didn’t want to go. For a whole year, even when I did go, I was reluctant,” she recalls. “Then one day, during our discussion time, Sister (Carol) asked me what I needed. It was the first time someone had ever asked me, and she really cared about my response.” Now, six years later, Jessie works at the Center. “I’ve got something to look forward to,” she says. “This place is my second home.”

The sisters hope to expand their operations in order to help even more women in the future. “We currently have 200 women on our waiting list for New Life Enterprises,” Sister Carol reports. Thanks to partnerships with Diplomat Pharmacy, Baker College, and most recently, Kettering, New Life Enterprises’ vision for expansion is in the process of becoming a reality; by end of 2014, the New Life Center is hoping to have 100 area women on their payroll.

While the original program was focused on women, men are now a common site at the Center due to other programs such as the Literacy program, the Food Pantry, and Community Ventures. The Literacy program, as its appellation indicates, helps adults learn to read, with an end goal of helping them earn a GED. With the GED exam changing to a digital-only format in 2014, the Literacy program is undergoing important changes, such as the addition of computer instruction. “We have our pupils practice both technology and reading skills through children’s computer games,” says Sister Carol, “to give them a feeling of success. You have to experience success to keep going with something difficult.” Sister Jan Popilek, who works in the Literacy room, added that another useful tool is a weekly modified newspaper, which contains current news written at a level appropriate for new readers. “One of my students was a man who couldn’t read,” she remembers, “and he used to memorize the news to be able to talk about current events at work; now he has a GED.”

Cara Manns is another success story from the Literacy program. She was one of the first 12 women to graduate from the New Life program and last month, after nine years of hard work in the Literacy program, she received her GED. “I was in the sewing room for a while, but it just wasn’t my thing,” she says, “so I began working at the front desk of the New Life Center while I worked to get my GED. I never thought of myself as a receptionist, but now I have that degree and I can say it – I am a receptionist!” Cara’s proud smile spread from cheek to cheek as she spoke of her accomplishment. She credits the sisters with her success, saying that their indefatigable support touched her heart and pushed her to keep going. “I read a saying somewhere that has become my motto since I came here: People put up walls, not to keep others out, but to see who cares enough to pull them down. And those two (sisters) pull them down.”

One of the most important lessons that the sisters teach is self-sufficiency, and they teach this by not hovering too much. “I remember Sister left me to my own devices after showing me a stitch only one time,” Jessie says. “At first I was frustrated and I thought she was really rude, but she wanted me to realize for myself that I could do it. She believed in me. Today, I am the only one in the sewing room who knows how to make suture seams,” she reports proudly. Olivia Wilson, who began the New Life program last spring, is profuse in her praise of the New Life program. “I love this place,” she said with a joyful smile. She remembers seeing the sewing room at the Center and thinking to herself, This is where I want to be! “The sisters are so serious about education, and I’ve been able to turn around and pass along what I’ve learned here to others in my neighborhood,” says Olivia. “My life has changed: I feel powerful and useful!”

So many people walk through the doors of St. Luke’s N.E.W. Life Center lost and hurting, destitute and without a way to improve their lives on their own. Sister Carol says that they try to meet people where they’re at by listening to their needs. An old Chinese proverb that the sisters have taken very seriously goes like this: Give a man a fish and feed him for a day. Teach a man to fish and feed him for a lifetime. “Through our Food Pantry, we feed people daily, because that is what they need, but through our other programs, we ‘teach people to fish,’” says Sister Carol. The results are breathtakingly beautiful.

Are you interested in purchasing photos from this story? Go HERE and select the “NEW Life Center” category.