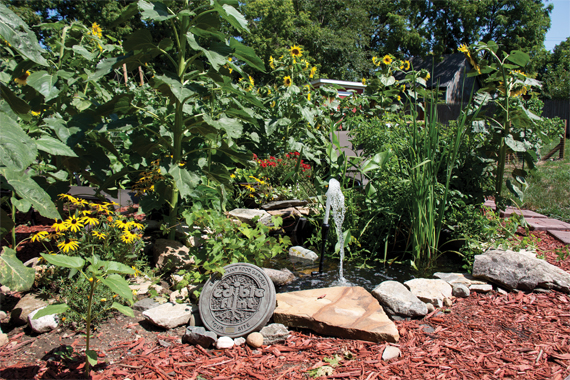 Four years ago, an idea sprouted in the mind of Terry McLean. McLean works with the Michigan State University Genesee County Extension in Flint. Hitherto 2009, she had worked in horticulture, but then decided to step into urban gardening, something she was very familiar with and also longed to do. McLean says that in hindsight, a fortuitous confluence of events made the time ripe to implement urban gardening in Flint. The notion began to germinate in 2007 and 2008, when the increasing number of vacant lots acquired by the Genesee County Land Bank along with an undercurrent of several greening strategies and the willingness of the Ruth Mott Foundation to provide grant funding all worked together to bring about the area’s first major urban gardening effort, named edible flint.

Today, edible flint has seen four years as Flint’s principle urban gardening effort. The combined effort of the aforementioned organizations, along with Mott Community College, the University of Michigan-Flint, Michigan State University and the C.S. Mott Group for Sustainable Growth, and even the United States Department of Agriculture has brought about the promotion of healthy living for city residents through the fresh food produced by urban gardening.

So, what does urban gardening look like? Edible flint holds Distribution Day meetings, at which Garden Starters kits are sold for only $15. The low cost makes homegrown produce accessible to inner-city residents. Knowing their demographic and seeing that gardening is practiced by very few city residents, edible flint provides gardening guides to those who purchase kits. In case the beginner encounters unforeseen issues not addressed in the gardening guide, edible flint also offers garden starter services, which include soil testing, compost delivery, and land tilling at lower prices than the same services provided by other businesses. Those who get their garden off the ground—or rather, out of the ground—are eligible to become a part of edible flint’s Garden Tour, an annual event that takes members of the Flint community on a journey throughout the city to view successful gardens, ending with an “afterglow” party that usually features local musicians.

This year’s Garden Tour was held on July 31. It was well attended, although it was almost rained out. Interestingly, it rained during last year’s Garden Tour as well. Matt Appleton’s garden at his home on Oak Street in Flint was a part of this year’s tour. This is Appletons’s second year of urban gardening after beginning with an edible flint Garden Starters kit in 2011, and it was his first time on the tour. He recently counted 33 different types of fruits and vegetables in his garden, which has doubled in size since last year and covers about 1,600 square feet. Appleton comes from a rural childhood, so he says that gardening “has always been there,” and that he wants “to be able to keep” that part of his life, despite now living in the city.

In response to what he’d like to see in the future of urban gardening in Flint, Appleton stated simply and jovially, “Chickens!” At present, a landowner is not permitted to raise chickens in Flint, but Appleton wants to see this restriction lifted after having researched urban gardening in other areas, namely Pasadena, CA, where one family’s complete urban farming project on just 4,000 square feet has made them completely self-sustainable. Appleton finds the idea of self-sustainability appealing, and thinks that urban gardening will continue to move in this direction over time, even with limited space. He says, “Our experience has shown us that no matter how much space you have, you can experience the reward of planting things, watching them grow and enjoying fresher, better-tasting, chemical-free fruits and vegetables right out of your backyard.”

Edible flint represents a burgeoning national interest not only in urban gardening, but specifically in Flint urban gardening. In June, McLean gave a presentation on edible flint at this year’s meeting of the Agriculture Food and Human Values Society and the Association for the Study of Food and Society at Michigan State University. McLean says the place was abuzz with people asking, “What’s going on in Flint?” Having grown up in Detroit, McLean appreciates bringing green into urban areas. She now weighs the importance of her life’s work with sage-like wisdom when looking back on the progress of edible flint, and she appreciates that when it comes to nourishment, people typically agree without reservation. “I used to work in ornamental gardening, and while we need art in our life, we need food more essentially. There is a local grassroots economic benefit in something like edible flint, and food is that universal thing that people can agree on and support.”

For those readers who think that gardening in the city is too difficult, too time-consuming, or too costly, think again: green spots in Flint are changing the way city-dwellers eat, thanks to this program. Check out edible flint online to be a part of the support and the practice of urban gardening in your city!

Are you interested in purchasing photos from this story? Go HERE and select the “Edible Flint” category.