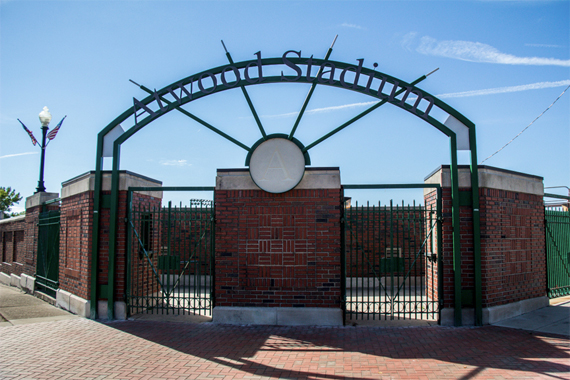 A crowd gathered on the green in front of Atwood Stadium on the morning of September 30 to celebrate the stadium’s transfer of ownership from the City of Flint to Kettering University. Speakers included Susan Davies, Vice President of University Advancement and External Relations at Kettering; Mayor Dayne Walling; former NBA player Mateen Cleaves; Judge Duncan Beagle, and the President of Kettering, Dr. Robert McMahan. Each speaker acknowledged what a sentimental subject the stadium was to them personally and to the city as a whole.

Mayor Walling said that Kettering’s willingness to keep Atwood a vibrant community gathering place was “building positive momentum” in Flint because it was “recreating a beautiful place in the heart of the city.” Judge Beagle, who was chairman of the Atwood Stadium Authority for many years and will head the Friends of Atwood club now that Kettering has stepped into the administrative role, claimed that Atwood is to Flint what Fenway Park is to Boston or Wrigley Field is to Chicago; Flint’s athletic legacy is intertwined with the stadium and holds a high place in the hearts of the city’s residents. “This change will allow the fantastic accomplishments of Flint’s brightest athletic stars to live on, and our unwavering pride in them is no longer in danger of being forgotten,” he said. Mateen Cleaves fondly remembered one of his own moments under Atwood’s “bright lights” in a head-to-head between Flint Northern High School and Flint Northwestern, and said that he was ecstatic to see the stadium restored to its former glory. “Everyone in the city has a connection to Atwood,” he said. “Today is a good day!”

Robert McMahan acknowledged that when he first met with the Atwood Stadium Authority to discuss a partnership with them, the council was skeptical. Why would a university that doesn’t have a football team want to take care of a football stadium? “It doesn’t make sense,” McMahan said, “but then, it does. We at Kettering are dedicated to making all of University Avenue a safe and walkable way, and Atwood is part of that. In addition, one of the things we demand of our students is service, and we as an institution must model the characteristics we ask of our pupils.”

As Kettering works to once again bring this beloved place back to life, look for exciting events at Atwood Stadium in the near future!

Are you interested in purchasing photos from this story? Go HERE and select the “Atwood Stadium” category.