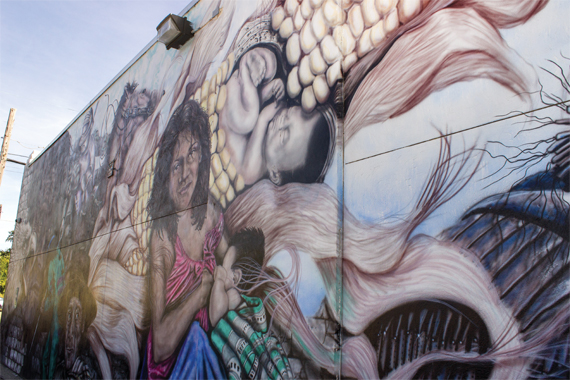 On the eve of Hispanic Heritage month, which runs from September 15 – October 15, members of the community celebrated the official ten-year anniversary of the Hispanic Technology and Community Center on Lewis Street. The HTCC is the result of collaboration between the American GI Forum and Mott Community College, which works to provide resources to Flint’s Hispanic community. Programs available at the center include computer-based educational services, bilingual instruction in English as a Second Language and Spanish as a Second Language, Spanish translation services, and a highly successful tax preparation service. Food giveaways are a new feature of the HTCC, thanks to a partnership with the Food Bank of Eastern Michigan.

The September 14 celebration included traditional Hispanic food, music, dancing and art. Ralph Arellano and Rosa Lambaria were guests of honor as recipients of Lifetime Achievement Awards. Also unveiled was a new mural painted by Armando Fernandez, which depicts the diversity of the Hispanic heritage by highlighting the many Spanish-speaking countries in North, South, and Latin America.

Are you interested in purchasing photos from this story? Go HERE and select the “HTCC Anniversary” category.