Dayna Copeland, 25, is learning how to be a better father, husband and communicator thanks to a Genesee Intermediate School District Head Start program called Fathers And Men Engaged (FAME). As a participant in the program, led by Mike Kildee, Head Start Family Engagement Coordinator, and James Patrick, Family Engagement Advocate, Dayna has changed his outlook on parenting.

“This program has helped me become a better father, forgive my own father and get in touch with my spiritual self,” says Dayna, husband of De’Genai and father of son Dayna, 3, and daughters Da’Nai, 2, and Da’Shai, 4 months. “I thought I was a good father just because I was there in the house,” Dayna says. “But I was wrong. One thing I’ve learned from this program is how to talk to my child when he’s getting out of line or does something I don’t approve of, which was kind of hard in the beginning. I’ve realized he’s not exactly going to understand everything that I’m saying to him. I no longer yell – I talk. I talk and break it down to him as much as possible to get him to understand. And yelling, well, yelling is going to make my child afraid of me. I want him to know I love him and I’m always here for him and that he has somebody – he doesn’t have to be his own best friend. Being a father brings me more happiness than anything in the world.”

The early childhood program, designed to draw fathers and men into their child’s school life is getting results. “The FAME program is an initiative to promote, invite and encourage men to become and remain involved in their child’s school life and to take an active role in their child’s education,” says Mike, who organizes 1,400 children enrolled in Head Start at 14 sites within the Flint, Beecher and Carmen-Ainsworth school districts. FAME is in its third year and kicked off the school year in September by joining the nationwide Black Star initiative to get more than one million fathers and men to escort their children to school on the first day. “We had more than 200 fathers on the first day of school,” said Mike. “We’ve worked hard to train the staff to be welcoming and supportive of fathers in the school building.”

Part of the FAME program includes an intense, six-week curriculum, known as the “Nurturing Fathers Program,” which features powerful modules to help fathers in areas that include reflecting back on their own childhoods and how they were parented; discipline, communication, overcoming barriers, healing and becoming the father you want to be. At the end of the course, there is a graduation ceremony that mothers, wives and children can attend and celebrate with the fathers. 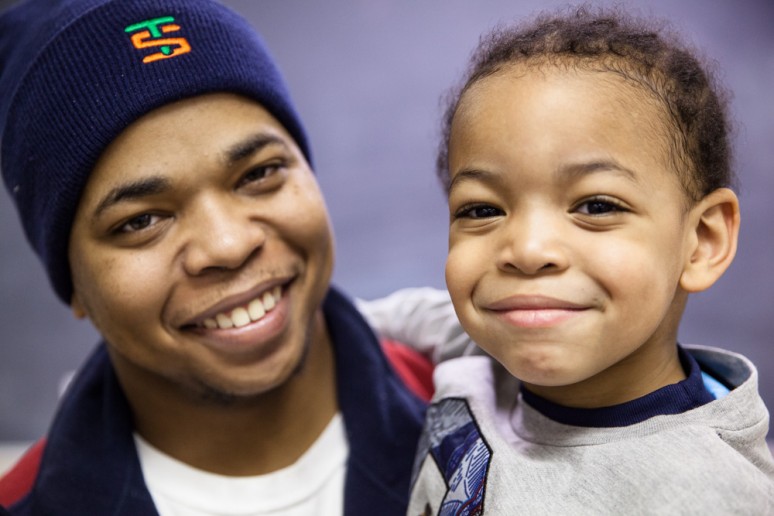 “Just because you have a child doesn’t mean you’re ready to be a father.”

Dayna believes the program is allowing him to give his children a more patient, understanding father who is present – something he didn’t have – and it is giving him a different and healthier outlook on parenting. “I stayed in a shelter with my mother,” says Dayna. “It was just me and my mother. I really didn’t have a father around, I didn’t have any possessions and we moved around a lot.” He had two sisters who lived elsewhere and his father wasn’t active in his life. “I really didn’t get much attention, so I was like my own best friend,” he says. “Some of my best times in my childhood were actually at the shelter because I had kids to play with and we all were kind of the same – they were my friends. No matter where I was, I felt safe with my mother.”

His upbringing didn’t prepare him for the role of fatherhood. “When my wife (girlfriend at the time) and I found out she was pregnant, I was excited, broke and living with my mom,” says Dayna, who dropped out of school but later received his GED and is now employed at Thai Summit America, an automotive supplier in Howell. “I knew nothing about fatherhood,” he says. “In order to get a driver’s license, I had to study and pass a test. There is no test to become a father – there is no manual or book to read.” Things changed when Dayna met Mike Kildee and James Patrick at the Nurturing Fathers Program meeting.

Mike and James open up the sessions by sharing their own childhood experiences with the young fathers. “I didn’t have a lot of interaction with my dad,” says Mike. “He worked a lot of hours outside of the home and my mother managed the household. James conveys how his mother left the home and his father raised him and his sisters alone. “He dipped into drugs on and off and he was a passive father, but did the best he could,” said James. The men, all strangers, suddenly begin to share their stories. “By the time the session is finished, the fathers feel connected to one another and realize they are all struggling with similar concerns and they all need support,” says Mike. James agrees. “It’s amazing to see them pour out stuff they’ve kept inside for a long time.”

Camaraderie among the men in FAME is evident, especially during the “overcoming barriers” session. “All of these young men are dealing with something,” says Mike. “Stress, anger, alcohol or drug abuse, unemployment, relationship problems, communication problems – they are all barriers to overcome. We try to address those barriers and give them tools to become a better parent and partner.” Dayna praises FAME without hesitation. “It’s like an outlet for all fathers,” he says. “It has helped me a lot and the guys have been there for me through personal times and I appreciate them for that. If you want to just get stuff off your chest or need help growing into the role of a father – like I did – they’re there to help. I say, ‘growing into’ because just because you have a child doesn’t mean you’re ready to be a father. You have to learn as you go. If you didn’t have a father figure in your life it’s going to be hard.” For example, Dayna admitted he usually focused on getting himself together in the mornings and didn’t always help his son brush his teeth. “I should have been teaching him because I’m his father,” he says. “But now I understand that routines are important for my son. We don’t skip brushing our teeth anymore and I make sure he brushes. I wake him up and we all brush our teeth together.”

Dayna says he can relate to James because of how he grew up. “We grew up kind of similar,” says Dayna. James mentors and guides him. “It was easy for me to open up to him and it made me comfortable. James told me about Divine Grace Ministries, the church he attends,” says Dayna. “I went once and have been going ever since. I’m glad I’m sharing and passing on spirituality to my child. FAME is amazing. Before FAME, I didn’t have anybody to talk to, didn’t know how to be a good father and I was never a big ‘talking-kind-of-person.’ I didn’t have a care in the world when I dropped out of high school. I was out on the street selling drugs and I thought that was life. This program has changed my whole life. Because of those changes I’m seeing blessings start coming my way – I’ve been married for four years, I have three beautiful children, I got my first job after my son was born and I’m working on being the kind of father he will look up to. My son pushes me to do better. He told me I was his super hero; but really, my son is my super hero, and I live my life now motivated to not make mistakes.”

Dayna and other members of FAME are leaving their children a positive legacy and that is the core mission of FAME. “My father made me who I am today and that is why I’m so passionate about the work I do with fathers,” said Mike. “The message I give to fathers in my work is to leave a legacy for your children that they are proud of. This is what my father did for me.” For more information on Fathers And Men Engaged, contact Mike Kildee at mkildee@geneseeisd.org.