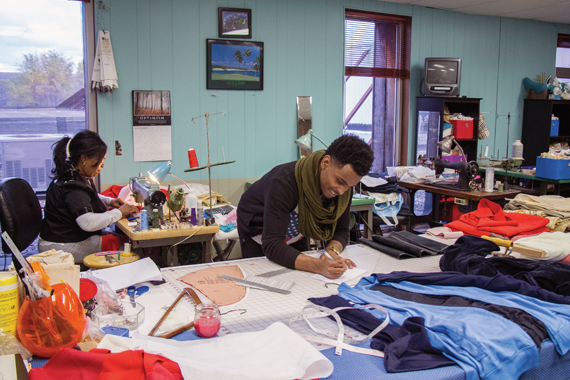 Just off Miller Road west of I-75 lies Yorkshire Plaza. Of the several businesses located there, one has had a short stent in its current space but boasts a long-standing tradition in the city: the perennial enterprise known as Tailoring by Blackwell.

Precisely 22 years ago, a young Karen Blackwell of Flint opened her own tailoring business in the city. Her father, Caleb Blackwell, was a lifelong tailor, and he entertained hopes of running his own shop in Downtown Flint. Unfortunately, Caleb passed away in 1985 before his dream materialized. Six years later, Karen realized his dream with a shop of her own. Her hands had been long trained in the craft, having begun learning under her father’s instruction at seven and having worked throughout the years with local department stores, including Hudson’s and Milt Weiss in Flint. Karen’s creations include not only her own wedding gown, but also personalized dresses for her bridesmaids. Today, she does work for patrons from all over Genesee County of various fields of employment, including civil servants whose uniforms need patchwork here and there.

It’s endearing to see a lasting and lucrative second generation trade in Flint’s black community. Multigenerational trade is an honor often lost on contemporary Americans. At 22 years in operation and over 50 years of progenitor and progeny professional experience, Tailoring by Blackwell looks to be in it for the long haul. Even more endearing than the accomplishments of two generations, and even more telling of the potential for continued existence, is the willingness of Eugene Blackwell, Karen’s son, to carry the company torch farther.

Eugene is a young and ambitious Flint college student who has always appreciated his mother’s trade but only recently considered it as one suitable for himself. He had quiet aspirations to be an engineer, but after years of calling on his mother’s help for his own bespoke wardrobe and assisting her at the shop, Eugene got over some initial fears and came to realize that he had a desire to make Blackwell tailoring a third generation service.

Concerning his foray into the trade, Eugene says he worried at first that “tailoring wasn’t very masculine, but then thought again, who cares what people think?” He wisely discerns that “success doesn’t have a color or a gender,” so he now boldly states that “even if people hold stereotypes about certain fields, it doesn’t matter.”

During my visit to the shop, Eugene began to share the implications of inheriting his mother’s shop. While sitting at one of the sewing stations as Karen stood ironing, Eugene exclaimed, “How cool would it be to have this passed down to me from my grandfather and my mother? I used to say to people who asked me what I was doing, ‘I’m going to school and working with my mom’ and I said this like it didn’t mean much, but this is a great testament! To have a black business on Miller Road, people come from everywhere to see us. Flint is really a diverse community, and our customers are all types: rich, poor, black, white, students, businessmen. It’s great! Everybody needs clothes.”

A look about the shop reveals walls covered with clothing and the mother-and-son team busy at work, continuing to do so as they talked. Such diligence is the hallmark of a successful business. Tailoring by Blackwell is in good hands.

Visiting the Blackwells was an enlightening experience. In the days of old, an individual’s hometown was revealed in his clothing. National department store chains have an egalitarian effect on fashion: in some regard, everyone looks the same from coast to coast. Blackwell’s is reminiscent of Timothy Goodrich’s custom shoe shop Downtown. Every Flint resident should dream for a moment about the prospect of having his own Blackwell suit and his own pair of Goodrich shoes. These truly are exciting times to be in Flint. Do go out and become a patron of these fine local establishments, reader. It will be worth your while.

Are you interested in purchasing photos from this story? Go HERE and select the “Tailoring by Blackwell” category.