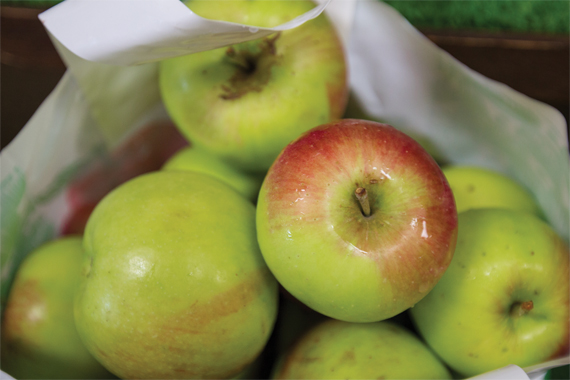 Don’t you just love the crisp, cool days of fall? The trees drop leaves of brilliant hue to crunch underfoot. The morning dew glistens like diamonds on the green grass. Football season has begun with a cheer and the aromas of fall’s favorite comfort foods permeate the air. For me, it’s time to make the annual trek to the apple orchard with my grandsons, Brennan, Mack and Noah.

Anyone who knows me knows that those boys are the apples of my eye! This year, they were decked out in their matching U of M shirts and raring to go. They share my love of good, fresh food, so they helped me put a pot of homemade beef and vegetable soup on the stove before we left. We chopped up fresh green beans – picked that morning – as well as baby white Michigan potatoes, onions and carrots. Corn was cut straight from the cob and juicy red tomatoes were skinned, crushed and added to the pot of beef simmering in a rich broth. We set the pot to low heat and headed out the door to Porter’s Orchard in Goodrich.

Porter’s Orchard is currently owned by the third generation of the Porter family, Raymond and Dee, who are proud of their family’s legacy. “My grandfather planted the first apple trees in 1921,” Raymond boasted to me. The day we visited, Porter’s was celebrating its second annual Military Appreciation Weekend, to honor all veterans, including the long list of veterans in the Porter family. As the daughter of a decorated World War II veteran and sister of a Vietnam War veteran, I applauded the effort. The celebration included a touching speech by three-star General Robert Smith and the Michigan Military Memorial Wall on display. “It’s our way of thanking the military for all they do for us,” said Dee.

After the celebration, it was time for a tour and a hayride. Noah was fascinated by the farm animals: cows, sheep, a miniature donkey, goats, chickens and even peacocks. The hayride took us through rows of trees sagging with the weight of ripe red apples, and we spied orchard-goers picking the last of the season’s raspberries.

As we walked into the country store, the aroma of cinnamon doughnuts wafted through the air. Fresh pies and apple dumplings – made from Grandma Edith’s recipe, Dee told me – were on display, tempting me to take a sweet treat home for dinner. It was the caramel walnut apple pie, however, that finally induced me to open my pocketbook. And of course, we couldn’t visit the orchard without buying a gallon of Porter’s award-wining cider, made from 12 different varieties of apples. Then, the boys asked me ever-so-sweetly for some doughnuts to snack on. What was I to do? We shared the doughnuts, still warm, along with a cup of the sweet apple cider, and even though Mack was stung while defending his cider from the bees, it couldn’t dampen our spirits. Our most difficult choice was which apples to bring home, as Porter’s offers 16 varieties. Noah took it upon himself to sample them, with a big grin and juice running down his chin. “This one’s good!” he said.

As we left the orchard, a light, misty rain began. Brennan decided that we should stop at a bakery for a loaf of fresh bread to complement the meal that awaited us at my house. He picked out a nice baguette, saying “This will go perfectly with soup.” Back home and ready to eat, the three hungry boys and I dipped pieces of the bread into the rich and delicious broth until not a bite was left. We washed it down with more Porter’s cider. The star of the show, however, was that caramel walnut apple pie, which we enjoyed à la mode. Contented on the couch watching U of M’s Wolverines beat Notre Dame, eyelids grew heavy. Yes, it was a happy end to our day at the orchard!

Are you interested in purchasing photos from this story? Go HERE and select the “Porter’s Orchard” category.