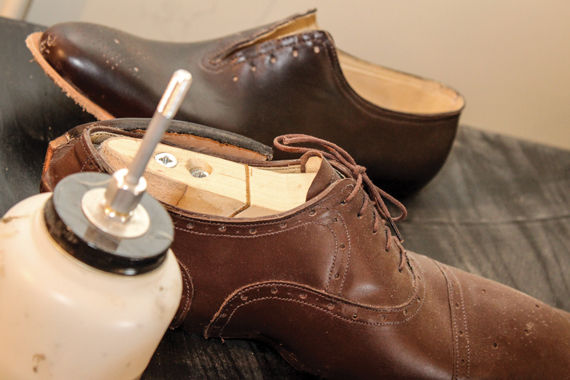 Strolling down Buckham Alley, one will find the front and rear entrances to several of Flint’s staple businesses, and Buckham Alley has long served as easy access to such places. Every so often, a new business is discovered to be wedged between these veterans, one that compliments the classic ambience of this well-trodden path. In April of this year, the Buckham Alley family was joined by Timothy Goodrich Custom Shoes and Repair.

Timothy Goodrich of Flint is sole proprietor of his custom shoe and repair shop. An atypical local 30-something, he is reserved and soft spoken, an “old soul” with characteristics redolent of an early 20th century entrepreneur. The shop suits the man: brick walls, steel machinery and hardwood floors—not a trace of modernity in sight.

Goodrich sat with My City Magazine for an interview in May. He pulled up an old wooden chair and removed his glasses, akin to those worn by Sigmund Freud. With a noticeably handsome vocabulary, Goodrich detailed how he got the idea to start a bespoke shoe business back in 2009, while serving in ministry at the now defunct Christ Community Baptist Church—formerly Third Avenue Baptist. “I was looking for extra work with the church. I love reading about entrepreneurial business leaders, especially those on the more creative front, and I love working with my hands,” he said.

With the two abovementioned interests at heart, Goodrich successfully launched a few projects in town, including the Flint Crepe Company with his good friend, Rob Klaty. But these projects couldn’t engross his full attention, and Goodrich eventually left the other ventures in 2012 to pursue a preexisting interest in crafting shoes. A little research in the field of custom shoes put Goodrich in touch with Perry Ercolino, a second-generation custom shoe designer from Doylestown, PA. After communicating with Ercolino via email for months, he received notice that the Pennsylvanian designer would welcome an apprentice. Goodrich left for Doylestown in April of last year with high hopes and scant belongings in order to give undivided attention to custom shoe design.

Working with Ercolino proved a challenging task. The man is a perfectionist—consumed by his trade—which explains the prestige that comes with owning a pair of Ercolinos. Goodrich, like most fledglings, started with inept hands that quickly became adept, winning the favor of the master designer in time. Goodrich’s eyes shone like those of a child who had pleased his parent when he described what it was like to come into his own as a craftsman under Ercolino’s tutelage. “I find deep fulfillment in creating stuff, and I like classy, distinctive shoes. Being in the bespoke shoe business, there’s a certain mystique about the craftsman who wakes early in the morning to go into his shop. It’s like that of a mad scientist.”

After nine months under Ercolino’s tutelage, a few hometown affairs effectively curtailed Goodrich’s stint in Pennsylvania, but he was not deterred. He came back to Flint ready to establish himself as the city’s premier custom shoe designer and repairman in 2013. Last April, one full year after arriving at Ercolino’s shop, Timothy Goodrich Custom Shoes and Repair assumed its place in Buckham Alley. Goodrich could not have been more excited to bring his new trade back to his hometown, and he has high hopes for the city he holds so dear. His sincere and ardent love can be seen in his response to the question, “What would you like to see for Flint’s future?”

“Flint is my hometown and it gets a bad rap, so I’ve always wanted to work from this city since, as writer Tim Kellar mentions, ‘Culture flows from the city outward.’” I’d like to see Flint continue on what you can argue is a trajectory toward culture. It’s like what was said about Jesus, ‘Can anything good come from Nazereth?’ Yes, it can. Flint’s had a dark past, but it means even more that she will emerge as a great city since the light within her is so great. I’d like to see an entrepreneurial spirit in Flint. We often see the poor get the short end of the stick, and it’s the responsibility of people who have been given much to help those in need. I’d like to see all kinds of people, churches and organizations working together for the good of the city. That’s what I want to see for Flint.”

Are you interested in purchasing photos from this story? Go HERE and select the “Tim Goodrich, Cobbler” category.