From the casual fan to the most passionate Maize & Blue fanatic, what University of Michigan football follower has not fantasized about dashing through the Michigan Stadium tunnel and onto the field before standing in the “Block M” at the 50-yard-line to the roar of 109,000 Wolverines Faithful?

Merely thinking about it gets the heart racing and the spine tingling.

Anyone willing to pay a small fee and find at least six others to come along can transform that dream into reality, minus the throngs of adoring fans. 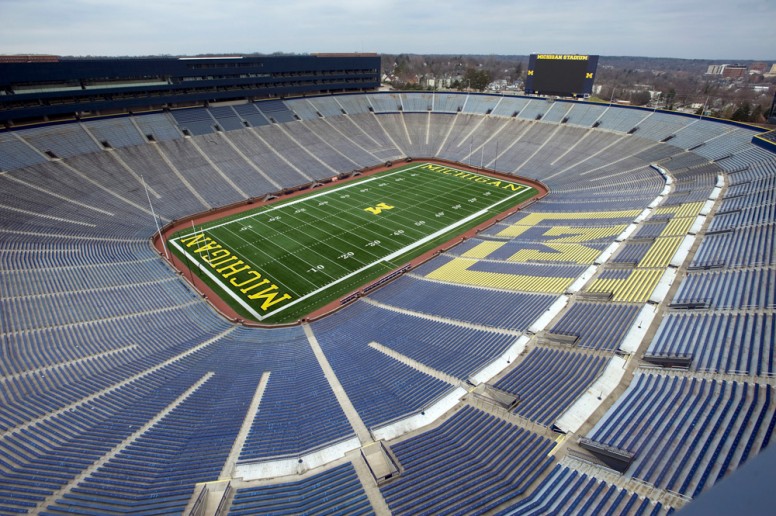 That’s right. Tours of the nation’s largest college football stadium, known as The “Big House” since it first opened in 1927, are available and include the chance to sprint through the tunnel and spend roughly 15 minutes marveling at the view from the field.

Generally, tours are offered Monday-Friday, except for Fridays during home football weekends, and must be scheduled at least two weeks in advance. Cost is $15 per person and tour groups must have at least seven people, no more than 40. Fans can also tour Crisler Center for an additional $5.

Tours lasting between 60-90 minutes are overseen by 80-year-old Bill Austin, a wealth of Wolverines’ gridiron knowledge who has been attending games there in one capacity or another since the 1940s. He began guiding tours in 2001.

Along the way, you learn things like the original construction cost of $950,000, and the stadium was built on land that had been home to an underground spring. Naturally, the water posed a problem during construction, creating a surface that resembled quicksand. It was this moist ground that engulfed a crane which remains under the stadium today beneath the 25-yard line on the southwest side of the field. The high water table also led to nearly three-quarters of the stadium being built below ground level.

Tours begin with the press box and its view of the stadium and Downtown Ann Arbor to the north. It has space for 231 journalists. The walls are adorned with photographs of some of the greatest players and most memorable plays throughout the program’s history, but without identification, offering trivia buffs an opportunity to show off their knowledge. 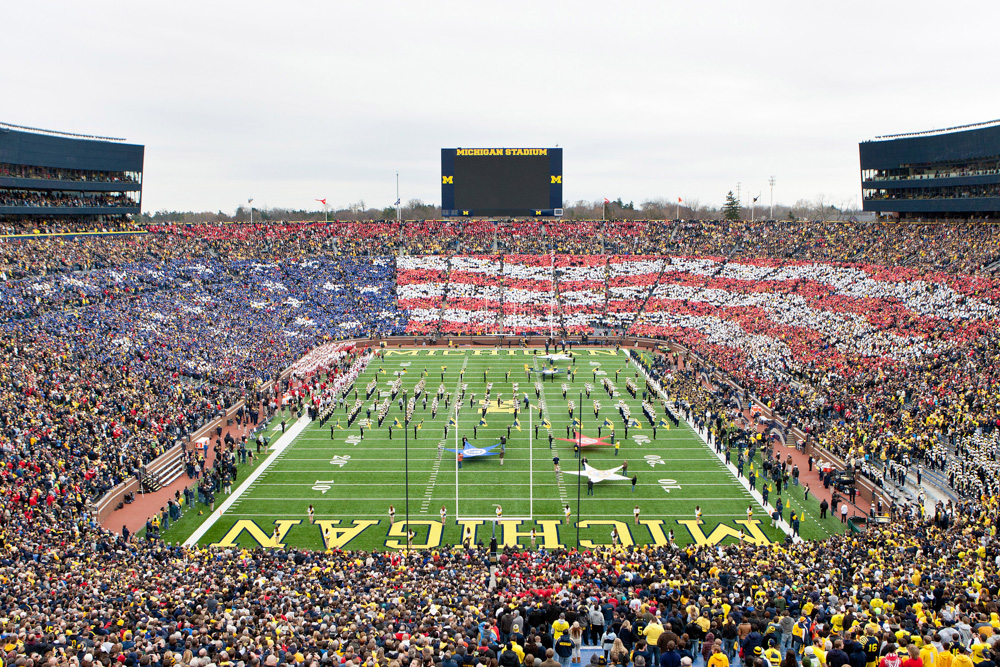 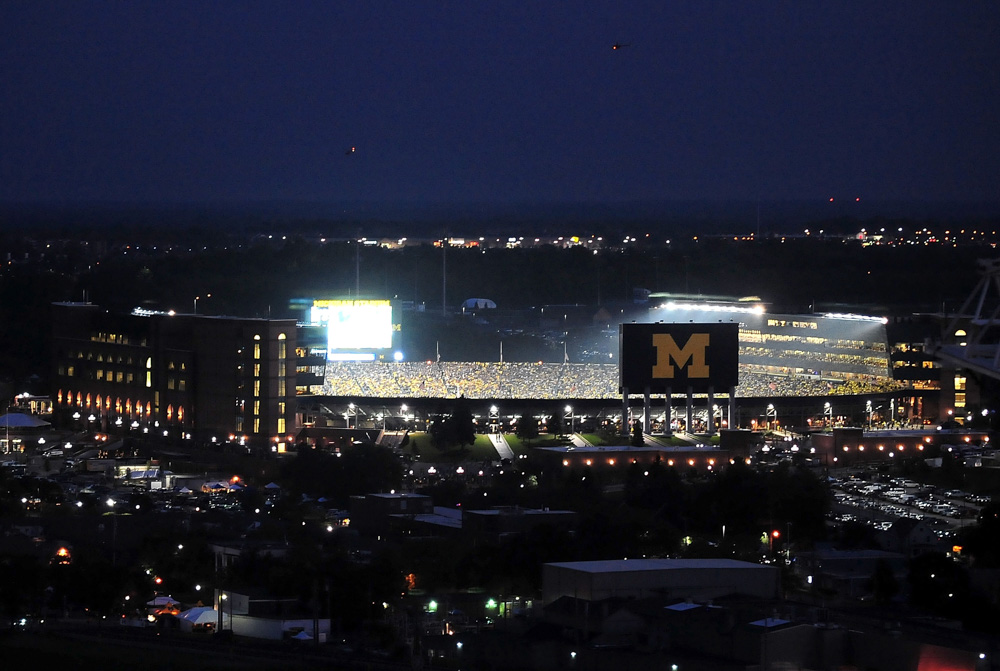 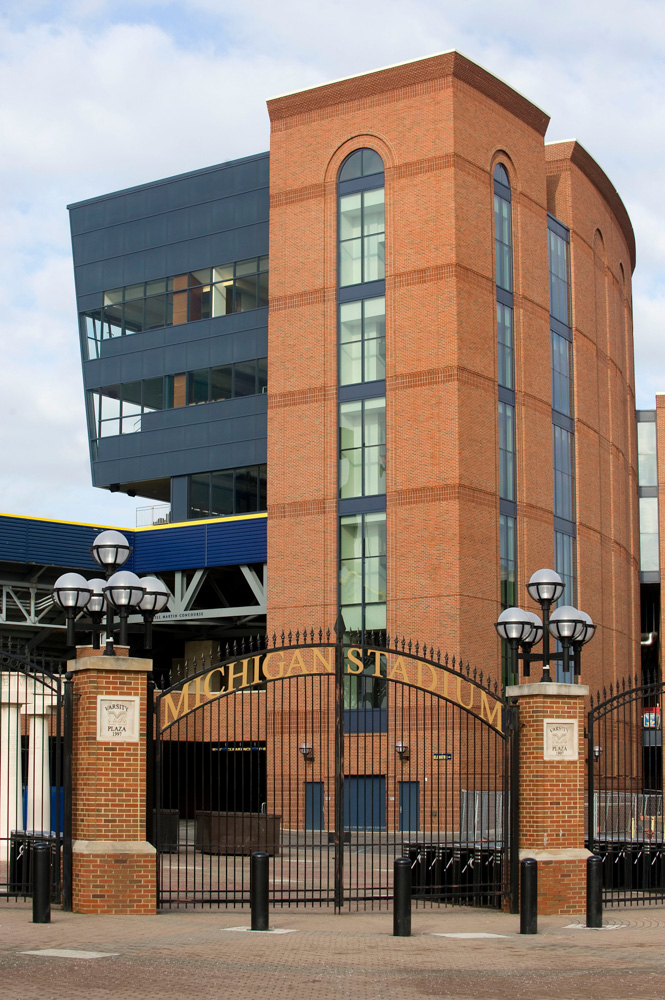 Next is a look at some of the stadium’s 81 posh family suites. Those wondering are informed that the suites rent for $60,000 per season ($90,000 near midfield), they include 16 tickets and four parking passes and must be rented for a three-year minimum.

The tour then goes to the east side sky boxes which house various memorabilia and are used for events throughout the year. There is a panoramic view from there, including part of Ferry Field where the Wolverines played prior to Michigan Stadium. Ferry had capacity of 40,000 and the Big House’s original capacity was 72,000 before gradually expanding to 109,901 in 2010.

From there, the tour winds down to the locker room and in the hallway, perhaps the most famous quote from legendary coach Bo Schembechler is inscribed: “Those who stay will be champions.”

Feel free to gaze around, but don’t step on the large, yellow “Block M” in the middle of the blue carpet.

Finally, the anticipation ends and the trek begins to the same tunnel that Flint football legends Rick Leach and Steve Smith, both former U of M quarterbacks, led their teams through to the gridiron.

To schedule a tour, call Austin at 734.764.4599 or email baustin@umich.edu. Tickets for individual games will go on sale July 11 and Big Ten Conference matchups tend to sell out the fastest. For a quainter spectator experience, consider attending a men’s or women’s lacrosse game in the spring.

Looking for a detailed account of how The Big House came to be? Grand Blanc doctor, Robert Soderstrom, has you covered. Also a Michigan football historian, Soderstrom is the author of a 359-page book entitled Big House: Fielding Yost and the Building of Michigan Stadium, published in 2005. New and used copies are available on Amazon.com. ♦