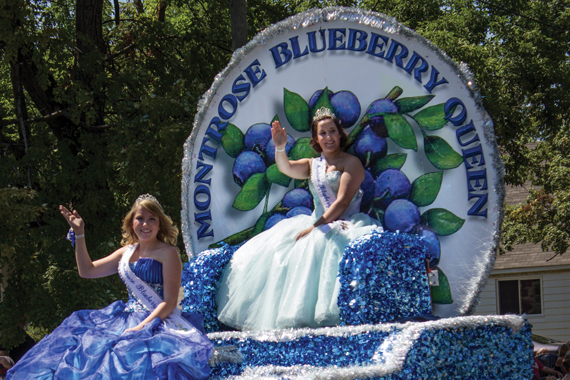 Thousands of people attended the 42nd-Annual Montrose Blueberry Festival held on August 15-18. The theme of the event this year was, “Under the Big Top” according to Janet Loomis, President of Montrose Blueberry Festival. There were plenty of traditional activities to please the young and old alike, including an Arts & Crafts Fair, food booths (think French fries, fresh-squeezed lemonade, root beer, and gigantic Elephant Ears) a pig roast, carnival rides and a pie-eating contest, to name just a few. Light and fluffy pancakes were a big hit at the Blueberry Pancake and Sausage breakfast, which has become a Saturday morning tradition. New events to the festival were a wine and cheese tasting, a move night and outhouse races.

What’s a festival without a parade? The Blueberry Festival Super Parade featured high-stepping music from Montrose and Frankenmuth High Schools and the 2013 Montrose Blueberry Queen, Kayla Pyre and her Court, Morgan Durham. Grand Marshals of the parade were Mayor Ray Foust and his wife, Julia.

Are you interested in purchasing photos from this story? Go HERE and select the “Blueberry Festival” category.