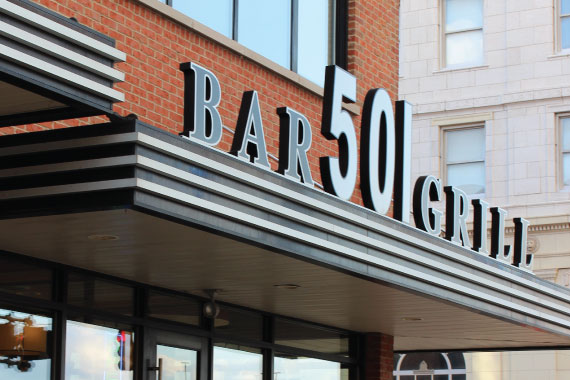 Vanilla waffles with a vanilla bean crème anglaise and buttermilk fried chicken served with pure, Michigan maple syrup and a red-wine poached pear … this is just one of the delicious menu options at Downtown Flint’s 501 Bar and Grill.

Several years ago, Phil Shaltz, proud owner of this tapas and martini bar, recounts how he wanted to open an eatery that had Manhattan flair. The restaurant occupies a building on Saginaw Street that had been vacant for about a year when Phil and ten other partners chipped in to open the popular dining spot in August of 2008. “We wanted to bring something different to Downtown Flint,” said Phil.

Today, the city’s center is bursting with a variety of restaurants attracting people from all over.

Rob Rumbel is 501’s executive chef: French-trained in the art of fine dining and absolute monarch of his kitchen. Rob grew up in Flint and left town as a young man to pursue a Culinary Arts career, promising he would never return. “But when I saw what was going on in Downtown Flint, I wanted to be a part of it,” he told My City Magazine. Prior to his arrival on Flint’s emerging restaurant scene, he worked at various posh establishments, including Ocean Prime in Troy and The Peninsula Chicago. He now lives in his hometown with his wife Margeaux, and their two children.

One of the most unique culinary items served at 501 are the tapas – small plates loaded with an array of appetizers or snacks. A Spanish dining concept, tapas is meant to encourage conversation while enjoying bite-sized morsels, rather than concentrating on a full meal. During one special event at the restaurant, Rob served “chicken and waffles” tapas by skewering a mini-waffle, a bite of chicken and a roasted pear. “It went over like gangbusters,” he chuckled. Rob likes to serve comfort food, knowing that fare reminiscent of one’s childhood is the most pleasurable to eat. Coney Island restaurants were the inspiration behind another favorite from his past, 501’s Gravy Fries. However, these are no ordinary fries with gravy; the potatoes are hand cut, the green peppercorn/cognac gravy is made with veal stock and the fries are served with flank steak and bleu cheese. A very popular entrée is a simple dish: wild-caught Michigan white fish crusted in parmesan, served with sautéed French green beans, grape tomatoes and red onion in a white wine butter sauce. The surprisingly affordable and versatile menu includes other items such as smokehouse burgers, flatbread pizzas, pasta and salads. “We have a wide variety of food, so there is something for everyone,” said Rob. In addition, select wines, classic cocktails, martinis, single malts, cognacs, draught beer and many specialty creations to satisfy any craving can be found at the martini and wine bar.

Of 501 Bar and Grill’s 40-member staff, Adam Lock has the longest history with the restaurant. He started as a server when the restaurant first opened and worked his way up to his current post of general manager. He loves meeting new people and is a great favorite with the “regulars,” many of whom come to the restaurant just to see what the chef is going to prepare. “Rob is extremely talented. We are very lucky to have a chef of his caliber in Downtown Flint,” Adam said. “He is young and vibrant and he always brings something new to the table—literally!” Although the menu’s variety is celebrated, there is a list of house items that customers demand on a regular basis. One of the most requested items is the Seafood Bisque, which is made with shrimp, scallops and crabmeat. Paul Newman, CEO of the YWCA of Greater Flint, is a regular diner. “I eat at 501 often, quite often actually,” he said. His favorite dish is the Medallions of Tenderloin – twin beef tenderloins served with seasonal vegetables in a red wine demi-glace – but he also loves the salads. “Everything about the restaurant is welcoming,” Paul said. “Great staff, great atmosphere, and the food is really, really good.”