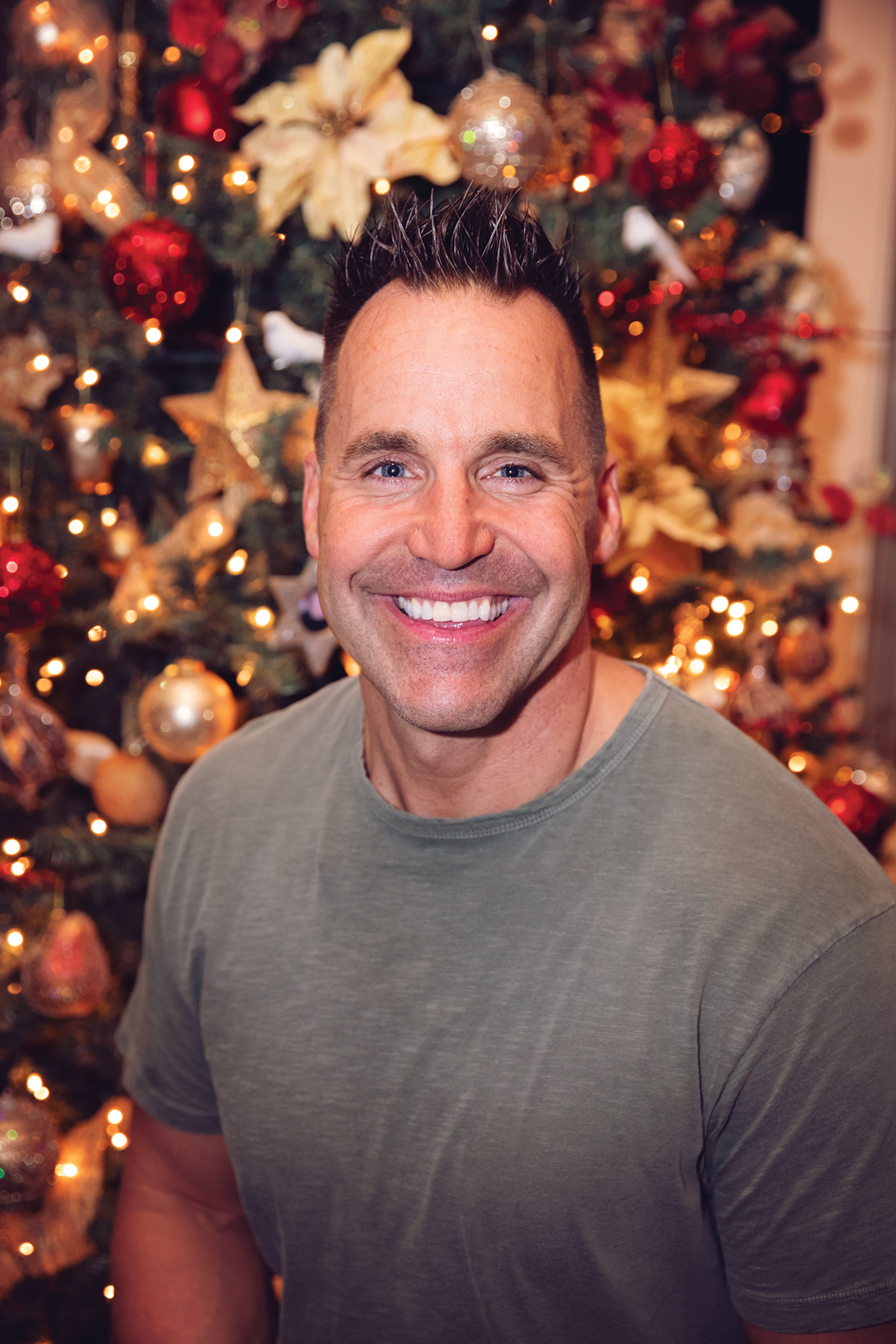 For Genesee County Sheriff Christopher R. Swanson, 2020 has been a year filled with defining moments, milestones and virtual world travel. Most of all, Swanson was reaching out to help others during the COVID-19 shutdown, combating human trafficking, and helping to change the lives of the inmates he oversees at the Genesee County Jail.

After his predecessor, Sheriff Robert J. Pickell, retired, Swanson was sworn in as Genesee County Sheriff in December 2019 and took office on January 6 2020. Last month, he was elected to continue as sheriff, a role which he says he will use to help change lives.

“I am a unifier and a bridge-builder. It is in my DNA to bring people together in their worst moments. That is the cause I serve and what is most important to me.” 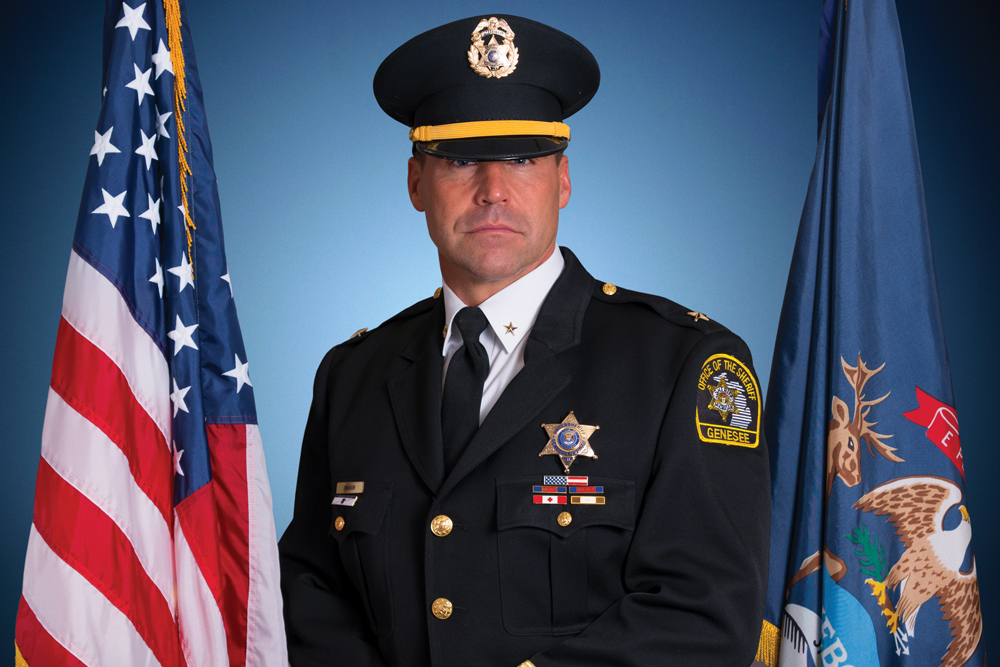 On May 30, Swanson experienced a defining moment in Flint Township, where an angry crowd had gathered to protest police brutality following the death of George Floyd in Minneapolis, MN a few days earlier. When confronting the protesters, Swanson asked, “What do you need us to do?” They replied, “Walk with us.” Swanson and the law enforcement officers at the scene removed their helmets and riot gear, then walked in solidarity with the protesters. “In that moment, hate became hope,” Swanson says. “It led to a positive outcome of hope and Flint became a beacon of light.”

Thinking back to that day, Swanson says it was the biggest decision he has made in his nearly 30-year career. “It was the most volatile moment of my life,” he adds. And, he said he could not have diffused a potentially violent situation without the support of his dedicated team who also deserve credit: Undersheriff Mike Tocarchick, Major David Stamm, Captain Rick Conkright, Sergeant Ryan Dobbs, Sergeant Rudy Lopez, Flint Township Police Officer Chad Miller and all of the other local agencies that participated.

News of what happened in Flint Township that day reached all corners of the world. Swanson has done well over 100 virtual interviews in countries including Australia, London, Canada and Israel to name a few, and was interviewed by the media on MSN, FOX, NPR, CNN, ABC’s “GMA” and NBC’s “Today” show. “I was so proud to represent Genesee County in such a positive light all around the world,” he shares.

Over the last several years, Swanson has been involved with Operation Underground Railroad (OUR), a West Coast international organization that supports enforcement of human trafficking laws and the rescue of sex trafficking victims through the use of special forces. Swanson thought to himself, “why are we not doing this in Genesee County?” This led to the formation of G.H.O.S.T. (Genesee Human Oppression Strike Team), a task force within the Genesee County Sheriff’s Office that seeks to apprehend human traffickers and people who attempt to have a sexual relationship with children. According to Swanson, multiple busts have occurred since its inception, three different victim rescues and the arrest of 80 pedophiles. In August of this year, the G.H.O.S.T. team arrested 17 alleged child sex predators in one operation.

When the COVID-19 crisis led to a massive civil shutdown last March, Swanson rolled up his sleeves and got to work to help the people in Genesee County. Many in the community were in need of food, water, diapers, medication and supplies. “As in many cities, the supply chain was cut off,” Swanson says, “and we had to figure out a way to help.” The Sheriff’s office partnered with community members to form the Community Care Task Force. On March 17, local union officials and 40 pastors of all faiths were deputized and the churches became distribution centers. One million pounds of food has been supplied to nine distribution areas established around the county, 70 percent of it inside the City of Flint. “If the task force had not been implemented, people would not have gotten the help they needed,” Swanson states.

With a goal of breaking the cycle of generational incarceration, Swanson launched the I.G.N.I.T.E. educational program for Genesee County Jail inmates. “We have teamed up with some major players,” Swanson informs. In support of the program, the NFL Alumni Association donated $16,000 in scholarships. The United Auto Workers (UAW) donated $5,000 for a virtual reality station in the jail. “This is unprecedented!” Swanson exclaims. He is proud to say that the program has been very successful.

In the last year, what was most important to Swanson was shining the spotlight on Flint in a positive way. “Flint is a great place,” he says with a smile. “The crime and the water crisis have drawn negative attention and cast a shadow on the city. Now, Flint has sent a message of hope that others can follow. We can all take pride in that.” 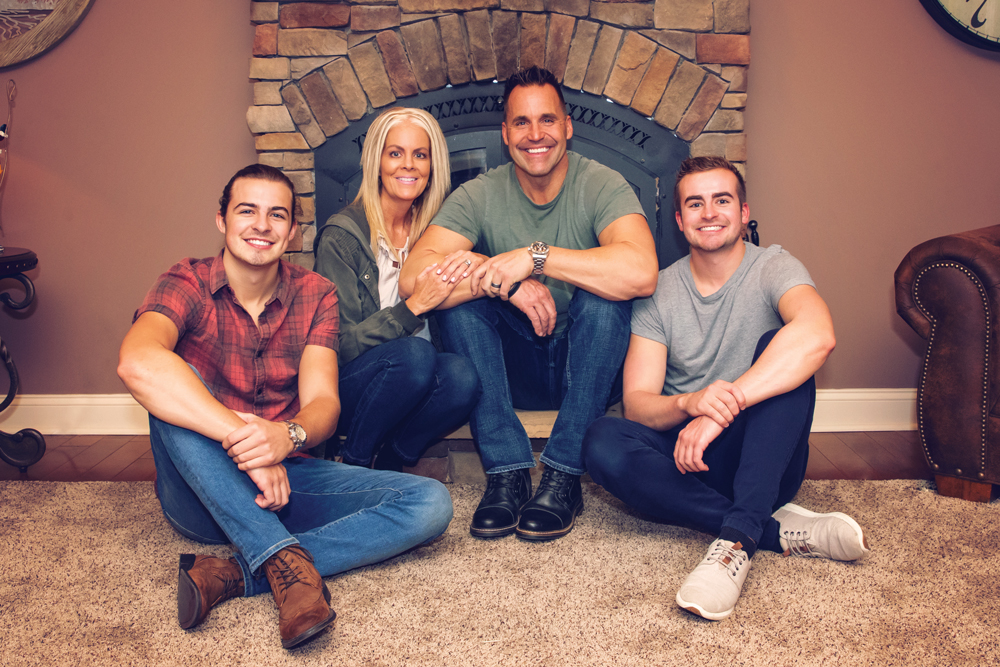 Watching people transform their lives is what motivates Swanson to continue to serve the community. “That’s what keeps me going,” he says. “Being recognized as My City’s Cityzen of the Year is an honor I share with all who play a role in helping me be the best man I can possibly be, especially my wife, Jamie, and our sons, Riley and Jordan. It’s humbling but at the same time, it is a personal challenge – to be the best I can be every single day.”