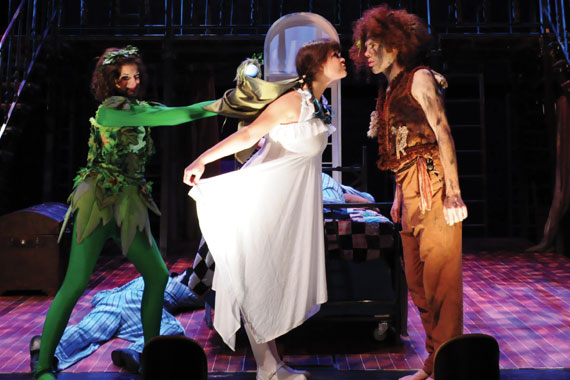 Those who had the chance to enjoy each of the Flint Youth Theatre’s five productions over the past year may have noticed a common thread among the performances. “Building Bridges” was the theme of FYT’s 2012-2013 season. Productions this year included Peter Pan: A Fantasy in Five Acts, The Hundred Dresses, A Year with Frog and Toad, Gee’s Bend, and The Velveteen Rabbit.

Executive Artistic Director, Jeremy Winchester, explained how “building bridges” was displayed in a few of the performances. “We see Peter, as a type of tragic hero, fail at building a bridge from childhood to maturity. The Hundred Dresses shows that victims of bullying have much in common, and in Frog and Toad, friendship is a bridge.”

FYT not only displayed bridge-building through their performances, but also through their partnerships with local organizations for each production. Sponsors of the last season included Genesee County Parks, The Whiting Foundation, and The Michigan Youth Violence Prevention Center, to name a few.

The Flint Youth Theatre closed out its 2012-2013 season with The Velveteen Rabbit, a play written by Thomas W. Olson that is based on the children’s novel by Margery Williams. Winchester was delighted to include the story in the season’s lineup. “It’s such a beautiful story,” he said. “A toy that learns to become real through love—I see it as a metaphor for how love makes our lives whole. It’s an important story for kids in the community.”

Winchester added, “Most theatre companies do Velveteen Rabbit during the Christmas season because the toy is given as a Christmas gift, but I think it’s a springtime story. The rabbit is given new life, which transmits audiences to a powerful sense of renewal.”
The team at FYT rehearsed for five weeks and gave 18 performances of The Velveteen Rabbit: ten for the public and eight that were exclusively for local school children. The turnout for their public performances was phenomenal: nearly every performance sold out.

With The Velveteen Rabbit and a successful season behind them, FYT is excited for the 2013-2014 season, which begins this month. The theme of the new season is “Wellness,” and sponsors include Crim Fitness and the Genesee Intermediate School District Health Safety and Nutrition Services. The Theatre would like to use the upcoming performances as a callout to the community about what it looks like to be well, and what things can be done to bring about positive changes in our circumstances. Concerning the role that art plays in the wellbeing of a community, Winchester poignantly cited individual perception as a definitive determinant of our shared outcomes.

“Art gives easy answers to complicated subjects, and we define ourselves by the stories we tell each other about our lives,” he said. He explained that it is up to Flint to tell a new story about herself—a story different from that which is often told—and he hopes that the arts might serve as the platform for this new story. Flint Youth Theatre has led the charge of positive change through the arts, and now the city and her citizens can play a part in that change by partnering with FYT. Be sure to check out their performance schedule!