There is an unmistakable excitement in Zoe Weinberg’s voice when discussing skiing. It’s obvious that when the Fenton High School junior slips on a pair of boots, straps on skis, clutches her poles and shoots out of a gate onto a snow-covered slope, there is probably no place she would rather be. In this setting, enthralled by the sensation of carving out a flawless run, Weinberg is very much at home.

Whether in her backyard at Mt. Holly, on the glaciers of Mount Hood, OR, training at various Northern Michigan venues or on the world-famous slopes of Vail and Beaver Creek in Colorado, she is free. “First of all, I just love being outside, doing all kinds of activities, and skiing is my favorite one,” says Weinberg, who took up the sport when she was a toddler. “I found that skiing fits the kind of person I am and skiing people are my kind of people, as well. It’s also such a major adrenaline rush for me. I’ve loved it from an early age.” 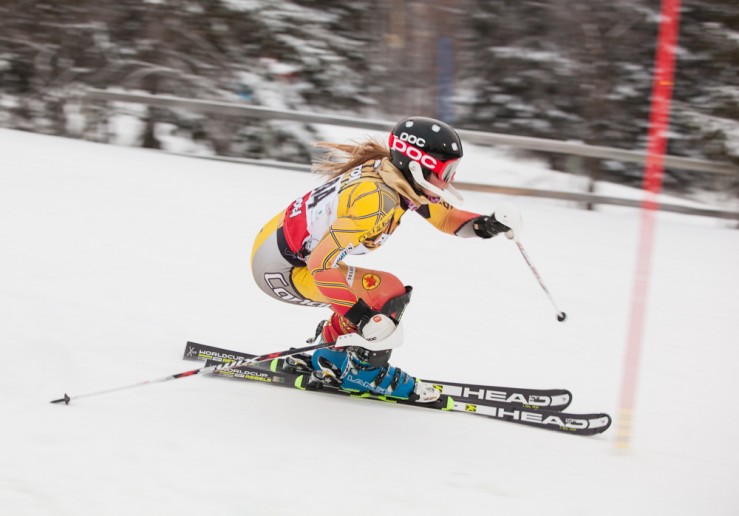 Weinberg, however, has gotten much more out of the sport she loves than just fun on the runs. The 17-year-old is on her way to becoming the most accomplished skier the Flint area has ever produced. A year ago, Weinberg became Genesee County’s first girls’ state champion when she captured the Division 1 Slalom title at Nub’s Nob in Harbor Springs. She placed second by .52 seconds in the giant slalom, narrowly missing another championship.

Weinberg also competes regularly in non-high school competitions around the country with the Northern Michigan-based Win Alpine Ski Team, recently placing 10th of 40 competitors in a giant slalom event in Minnesota. Most significantly, Weinberg finished nearly four seconds ahead of South Lyon’s Anna Geyer, who edged her for last year’s Division 1 Giant Slalom state title. “I feel like the season is going pretty well so far because I’ve done well in a couple of non-high school races,” says Weinberg, who also boasts three high school regional titles. “I came into the season feeling very prepared and pretty strong after training on Mount Hood and in Colorado. I also went to several camps in the off-season.” 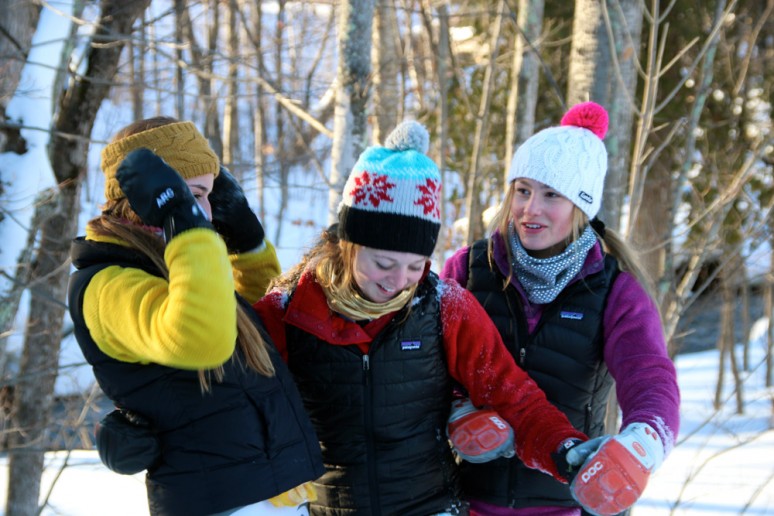 “Skiing fits the kind of person I am and skiing people are my kind of people.”
Photo courtesy of Zoe Weinberg

Skiing is now Weinberg’s sole focus after competing in gymnastics, equestrian events and swimming. She qualified for the 2014 state meet in diving, placing 16th. According to her coaches, Weinberg’s all-around athletic ability is an important asset. “Really, the main thing about Zoe’s success is that she is a very, very well-balanced athlete,” says Win Alpine coach Craig Davidson, who has worked with Weinberg for three years. “The sports she’s done in the past, along with the dedication to the sport of skiing, have really helped Zoe accomplish a lot. She has great balance on her skis and really loves competing against some of the top skiers her age in the country with our program. Zoe is also very coachable and open to anything that will improve her skiing.”

Fenton High School coach, Tim Hiscock, could not agree more. “Most coaches at the school would like her to try out for their teams, not only because she is great athlete, but also a great teammate,” he says. “She is just a very dedicated, hardworking athlete and has the skills as well, so all the puzzle pieces fit together for Zoe to have success. She stays fit physically and mentally, just knowing what she has to do, and going out and getting it done. Zoe does all the off-season training that many others are not doing. Don’t forget the importance of her parents’ commitment to all the traveling and things of that nature.”

Hiscock witnessed Weinberg’s talent long before she reached high school. He has coached in the Thunderbolt Racing Program at Mt. Holly for nearly 20 years and vividly recalls a five-year-old Weinberg standing out. “Yes, Thunderbolt is where Zoe started training and racing, but it was obvious she was not going to be there long before moving up to United States Ski and Snowboard Association events and more elite youth clubs,” he says. “She soon moved to the Pinnacle Alpine Racing team and then to Win Alpine to develop her talent.”

That talent started to develop when her parents’ love of skiing began to rub off on Weinberg at a young age. “Both of my parents are avid skiers and they probably started me when I was about two years old and by five, I was racing,” Weinberg recalls. “At first, though, my main sport was gymnastics, but eventually that was replaced by skiing.”

At age 13, Weinberg joined the Win Alpine program which requires regular travel to resorts like Schuss Mountain in Mancelona for weekend training in addition to farther travel for racing, but it has paid dividends for Weinberg. “I train with great coaches and a great group of girls with Win Alpine, who are always pushing me to become better and keep me very motivated,” she says. “I have been able to take my training and racing to the next level with them. I have just learned so much there.”

Bridges and the rest of the field were no match for Weinberg in the slalom at the state meet, however. She won the state championship by 2.38 seconds over Grand Haven’s Hannah Landman with a total time of 1:08.11 for the two runs. Bridges was sixth.

This month, Weinberg could make history by becoming the first Genesee County skier to win more than one state championship and remain on track to become the first boy or girl in state-meet history to capture three consecutive slalom titles.

Completing the unfinished business of sweeping both the slalom and giant slalom championships is Weinberg’s biggest goal for the state meet, which will take place at Marquette Mountain. “Certainly, the goal is to win both events, but it will take putting together four solid runs over a two-day period and defeating some very good skiers,” Weinberg says. “I’ve been to Marquette Mountain plenty of times and it’s one of my favorites, so I know it well. It’s certainly different from Nub’s Nob, but I feel like I’ll be ready. I’ve been really concentrating on taking the fastest line down the hill and improving my racing tactics.”

According to Hiscock, the other competitors in the state-meet field will have to overcome an even-better Weinberg. “Zoe is as fit as she’s ever been and her training during the past year has been very consistent, so she is going to be more ready for the state meet than she was a year ago,” he says. “I would expect that she can win both the slalom and giant slalom this time.”

As for non-high school competition, qualifying for the U-19 National Championships remains a possibility for Weinberg if she can generate enough points in her remaining races with Win Alpine. Her ultimate goal is competing at the next level. “Qualifying for U-19 Nationals is very tough, but hopefully I can make it happen and if not, next year for sure,” says Weinberg, who lists Vail and Beaver Creek as her favorite places to ski. “I am working toward skiing in college. I am not sure where that might be yet, but it would be really exciting.”