Julie Lopez, Director of Crime Stoppers Flint & Genesee County, knows firsthand what it is like to lose a loved one to violent crime. Her father-in-law, Pablo Lopez, was murdered in his home on Flint’s east side on July 9, 2011. “He was supposed to be at a family function on the Fourth of July,” Julie remembers. “He never showed up.” The family began searching for their beloved patriarch. He was well known in the area and retired from Buick, where he had worked for over 30 years. He was actively involved with UAW 599 and a political activist. A family friend found him at home in his bedroom shot to death, and to this day, his murder is unsolved. “We thought it would be resolved right away,” says Julie, who is still emotional about the loss. “We believe there was no forced entry of the home and we are still searching for answers.”

Julie became the spokesperson for the Lopez family, reaching out to Crime Stoppers for help in solving the case. “I didn’t really know what Crime Stoppers was,” she admits. “I became the liaison between the family, law enforcement, the media and Crime Stoppers.” She became so passionate about the organization that she went to work there, helping other families who are just like hers: searching for answers. She remembers her sister-in-law saying at a Crime Stoppers press conference that this was something you’d see on TV, and you never imagine it happening to someone in your own family. “Now, I have families saying the same thing to me.” 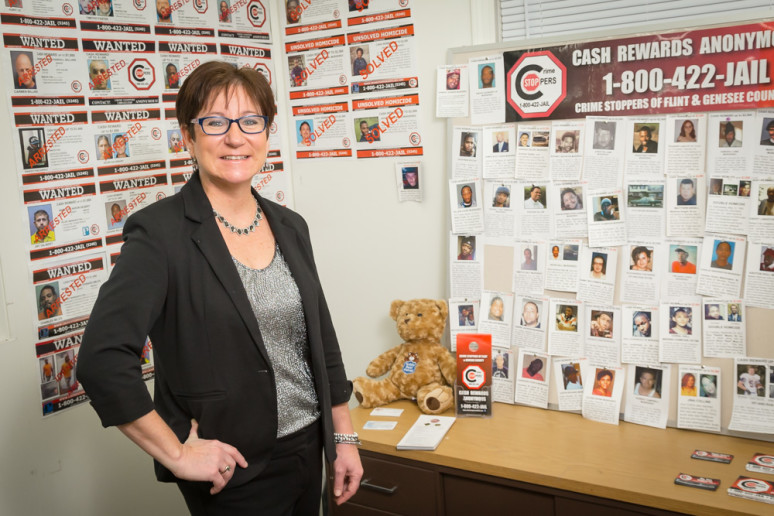 For four years, Julie has been the Director of Crime Stoppers Flint & Genesee County, which she helped launch locally. “We wanted our own robust program with our own local board of directors,” she states. “I remember thinking of all the moms who had lost a son or daughter and how they were feeling, waiting to hear from the detective. I told myself, ‘I’ve got to help those families.’”

According to its Mission Statement, Crime Stoppers partners with law enforcement, the media, and the community to help solve and prevent crime. It is an avenue for citizens to anonymously provide information to law enforcement. The organization works diligently to educate, engage and empower citizens in the efforts of solving and preventing crime. In addition, Crime Stoppers highlights unsolved cases on television, radio and social media, in the hopes that someone will come forward with a tip to help solve these cases. If that information leads to an arrest, tipsters are eligible for a cash reward.

There is a facebook page, called “Justice for Pablo Lopez.” “We were really close,” she remembers, fighting back tears. “Pablo has four kids and he was close to all of them. It’s a big family – a good family. It was very tragic.” And, Pablo was very involved in the community, his daughter-in-law reminiscences. “He was an Air Force veteran. He was all about the veterans and all about the community.”

Crime Stoppers is something Julie believes in with all her heart. “Our new slogan is ‘Your Voice Matters’,” she says. “Our community has suffered some hard knocks and there is a need for this program. It needs to be sustainable.” And Julie works very hard to make that happen. She was very excited when they were recently awarded an $80,000 grant from the Ruth Mott Foundation, to be specifically used for the northeast area of Flint. Because of the grant, they were able to enhance the marketing of the organization. “The tips have definitely spiked with the increased marketing,” Julie says. “Our number one goal is keeping the anonymity of the tipsters.”

Last year, Crime Stoppers received 570 tips and while the final numbers are not in for 2017, it already exceeds last year’s tips. “In the last four years, over 2,000 tips have been processed with over 150 of them leading to an arrest,” the director reports. “And we’ve paid over $64,000 in rewards.” She credits the success of Crime Stoppers to its fantastic board of directors. “They all bring something different to the table,” she says. “We are working right now on building up our volunteer base.”

The Crime Stoppers office is located at the Flint Police Department. “But we are not law enforcement,” Julie points out. “We are not the police, we only help them. It is very helpful to have our office in the police department, so that we can work closely with the detectives.” 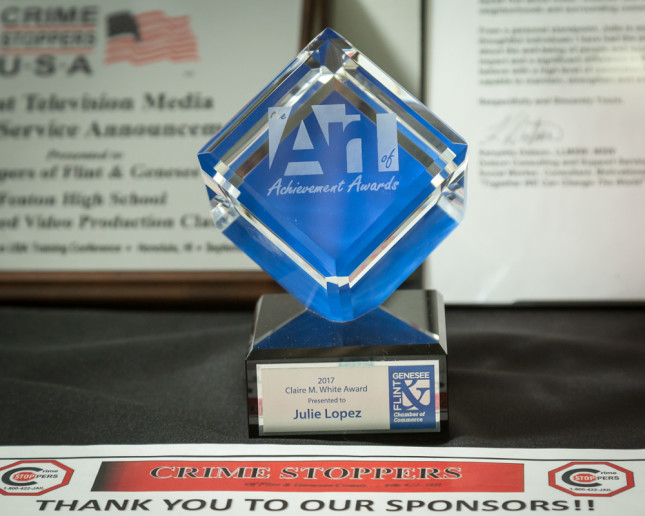 Recently, Julie received the Claire M. White Award from the Flint & Genesee County Chamber of Commerce. The award recognizes exemplary community leadership. After receiving the award, which she considered a great honor, Julie said she went home and sat quietly. Her husband told her, “You have always done things for other people, but this (the award) was because of Dad.” She told him, “Yes, it was Dad getting me to do community work.”

Julie finds her work with Crime Stoppers to be very rewarding. “My best days are when I feel like a family member of someone who has lost a loved one to violence, and can provide some hope that their case will be solved. I’ve had the opportunity to tell people their case has been solved, and that is the reason I’m doing it.”

The entire Lopez family is hopeful that one day, Pablo’s case will be solved. “Maybe, if that happens, I’ll know what it was like for the families who got ‘closure’ – a word we don’t like to use – but we all need these answers.”

“Our Number 1 goal is keeping the anonymity of the tipsters.”
Julie Lopez