As the final horn blared at Game 6 of the NBA Finals last October, the Los Angeles Lakers came together on the court and began celebrating their first NBA Championship in ten years. Among them were JaVale McGee and Kyle Kuzma, who both rose from humble beginnings in Flint to reach the NBA. They were raised by single mothers who made tremendous sacrifices to help their boys realize their dreams. McGee and Kuzma soon embraced each other amid the celebration. “Winning it for Flint, baby!” said McGee as he turned toward Kuzma.

Kuzma, one of seven Lakers who played in all 21 playoff games, was overcome with emotion as he addressed the media afterward. “It’s still setting in,” he said. “I’m half-drunk right now from all the champagne, so I don’t know how to act exactly. But, man, just a kid from Flint, Michigan. It’s crazy, crazy, crazy. I almost didn’t go to college. Wasn’t supposed to get drafted. NBA champion. It’s unbelievable.” The celebration later continued at a restaurant at the Walt Disney Complex in Orlando, FL – the team’s home for three months after the NBA season resumed.

A few days later, as winning a title in his third NBA season sunk in, Kuzma tweeted about the accomplishment. “Yo, just accomplished a whole life long goal. Like when I was 7,
I wished and wrote down to win a NBA championship,” he posted. “Embrace your journey. Marathon life.”

At 32, McGee is seven years older than Kuzma, meaning they did not know each other during their time in Flint. They first became acquainted when McGee joined the Lakers last season after helping the Golden State Warriors to NBA Championships in 2017 and 2018. “Naturally, we gravitated toward each other when we became teammates, having so much in common and sharing the same goals,” McGee said. “It’s truly amazing for him to accomplish what he has in just three years in the league. Kyle played some good basketball in the playoffs to help the team. I was very happy for him.”

The 6-8, 220-pound Kuzma made the most of his playoff playing time, averaging ten points per game (good for fourth on the team). He was also seventh in minutes per game (23), but averaged more points than three teammates who received more playing time. The 7-foot, 270-pound McGee saw action in 14 playoff games, starting in 11, the most playoff starts in a single season of his career. In fact, only four Lakers started in more playoff games. 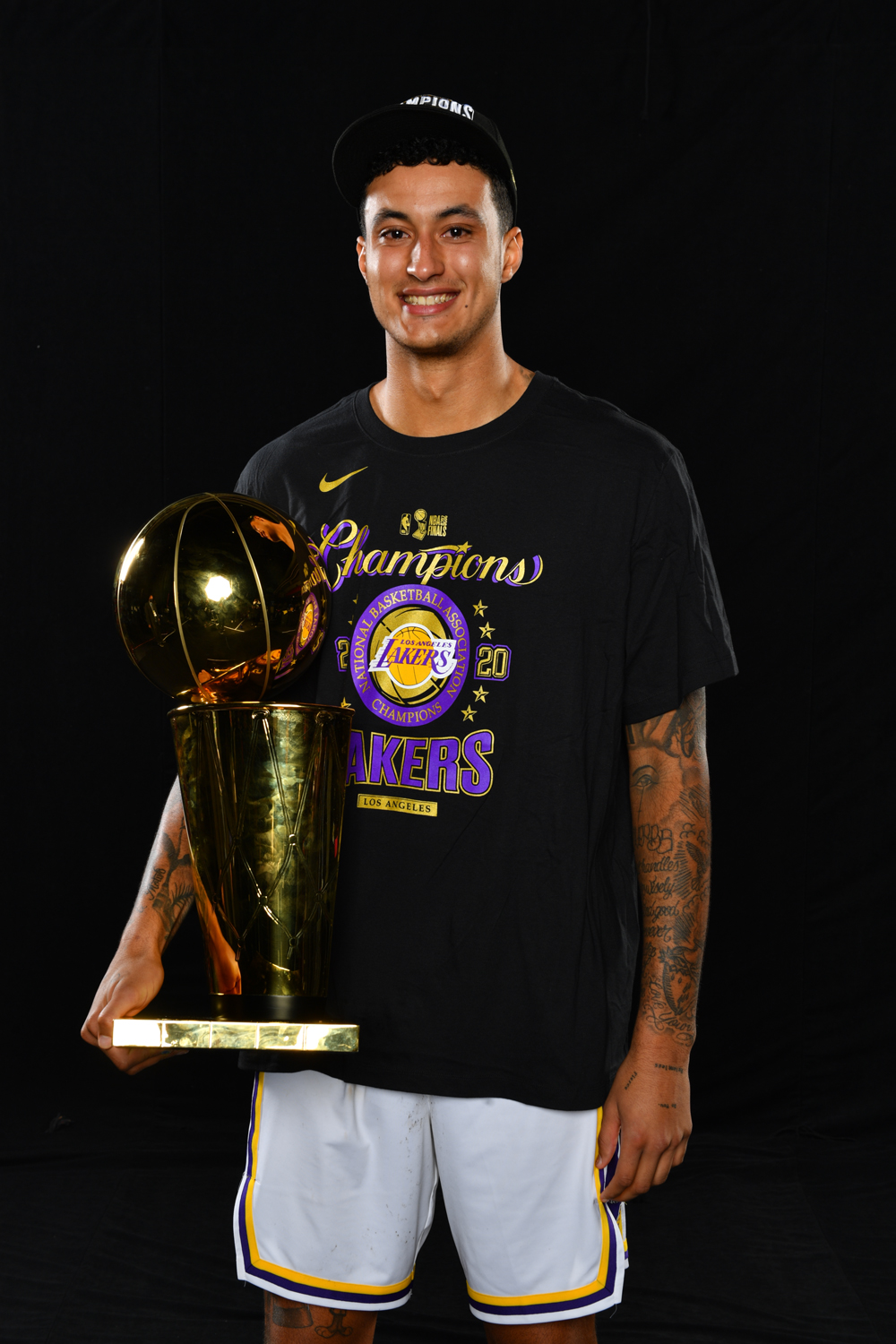 “Yo, just accomplished a whole life long goal. Like when I was 7, I wished and wrote down to win a NBA championship. Embrace your journey. Marathon life.”

“This championship was certainly different from the other two I won, just because of everything we went through this season, and living in the bubble for three months in Orlando,” he said. “It was an amazing feeling of accomplishment for us and it added to the McGee legacy. I also played a bigger role than I did with the Warriors because I was the starting center most of the season.” Indeed, McGee started all 68 regular-season games, the most of his 12-year career. In contrast, he only started 27 games over two seasons with the Warriors. “I had an okay season overall and my stats were not everything I wanted them to be, but I filled the role I was asked to fill,” McGee said. “I was a rim-protector and a defensive threat.”

For his part, Kuzma played in 61 regular-season games, starting nine, and averaged 12.8 points, third on the team behind Lebron James and Anthony Davis. Kuzma graced the cover of the Lakers Media Guide along with James and Davis.

Once the NBA season resumed, McGee felt the Lakers were title favorites based on how the team was coming together and embracing their roles. The addition of Anthony Davis proved invaluable and, unlike the previous season, LeBron James was healthy. “The camaraderie and the way we all bonded together was huge,” he said. “We had each other figured out and were playing extremely well together. We knew Lebron and Anthony were going to get their numbers and make a huge impact, but everybody else contributed to the championship.”

Not long after taking his turn at clutching the Championship Trophy, McGee called his mother, Flint basketball legend Pam McGee. They are the first mother and son to play in the WNBA and NBA. Pam McGee led Flint Northern to a pair of state titles, was an All-American while winning two national championships at USC and helped Team USA win gold at the 1984 Olympics. McGee’s sister, Imani McGee-Stafford, has also played in the WNBA. “Mom just congratulated me and reminded me of everything we’ve accomplished over the years,” McGee said. “She was happy I got to be part of such a special team this season. Mom always taught me the importance of being the hardest-working guy in the room because that will lead to great things.” McGee, who is known as a generous teammate, gifted all Lakers players and coaches with $180 bottles of Crown Royal XR Blended Canadian Whisky in celebration of the championship.

McGee said life inside the NBA’s bubble at Disney took some getting used to. “You know how when you are at college but don’t have a car, so you have to stay on campus? It was kind of like that,” he said. “The lack of freedom was the biggest thing to handle, but we all settled into the routine of just seeing the same people over and over again.”

McGee brought a camera with him and filmed “Life Inside the Bubble” episodes for his YouTube channel that offered rare insight into what it was like for the Lakers at Disney. He chronicled player meals, daily COVID-19 tests, fishing, hanging out in the pool, and tossing around a water polo ball, among other things. In one episode, he and Kuzma share a laugh about how small the pancakes that came with their breakfast potatoes were. “I always liked to do things with my camera and got a good response to the first episode, so I kept making more,” McGee said. “I think it was a great way to show fans what our lives were like during that time.”

The Lakers flew back to L.A. and were greeted by adoring fans who wanted to catch a glimpse of their conquering heroes. McGee addressed them. “We needed some positivity with everything L.A. has been through this year,” he told those gathered. “It’s amazing we got the opportunity to bring this title to the city. So, it’s a beautiful thing.”

McGee’s father, George Montgomery, did not play a role in his upbringing, but did give him his height. (Montgomery was a 6-10, All-Big Ten second-team center at the University of Illinois in the 1980s.) McGee lived in Flint until age four and returned to attend Flint Northwestern in the seventh and eighth grades. He lived in several places in between due to his mother’s playing career. In high school, McGee played at Detroit Country Day, Fremont’s Providence Christian High School and Hales Franciscan in Chicago before playing two seasons at the University of Nevada. “I have plenty of great memories from my time in Flint, especially hanging out at my grandmother’s house,” he said. “We didn’t have a lot, but there was a lot of love and I was happy. My mom drove me nearly an hour to Country Day because she thought that would be best for basketball and education. She would sacrifice anything for her kids. I was really lucky in that way.”

He was taken in the first round of the 2008 Draft by the Washington Wizards and also played for the Denver Nuggets, Philadelphia 76ers and Dallas Mavericks before joining the Warriors and Lakers. He was second in the 2011 NBA Slam Dunk contest.

Even after achieving his dream, McGee never forgets his hometown. Among the ways he has supported Flint is through an annual Turkey Drive, giving away a total of 600 turkeys during last year’s event. “I also really enjoyed bringing the NBA Championship Trophy back to Flint after I won it in 2017; that was special,” he said. “Flint is always on my mind because that is the place that made me who I am and I still have family there.”

Kuzma’s father has not been a part of his life, either. His mother Karri Kuzma, a two-time state shot put champion and varsity basketball and volleyball starter at LakeVille High School, found out she was pregnant with Kyle while attending Hillsdale College on a track scholarship. She left school and returned to the Flint area to begin life as a single parent, which was a struggle at times. The family moved around the Flint area nine times in a period of 16 years and at one point, lived in the basement of Kyle’s grandmother’s home after Karri was laid off. However, she always found a way to take care of Kyle and, later, his brother and sister. Kuzma’s stepfather, Larry Smith, was with Kyle’s mother for 13 years and became a father figure. The two often played basketball using a Little Tykes set when he was young. Sometimes, friend Monte Morris, now a member of the Denver Nuggets, would join them.

After starting his high school career at Burton Bentley, Kuzma transferred to Rise Academy in Philadelphia. He then spent three seasons at the University of Utah, blossoming into a first-team All-PAC 12 performer. He was taken in the first round of the 2017 Draft and made an immediate impact, leading the Lakers Las Vegas Summer League team to a title. He was named MVP of the Summer League championship game and followed that with All-Rookie Team honors. 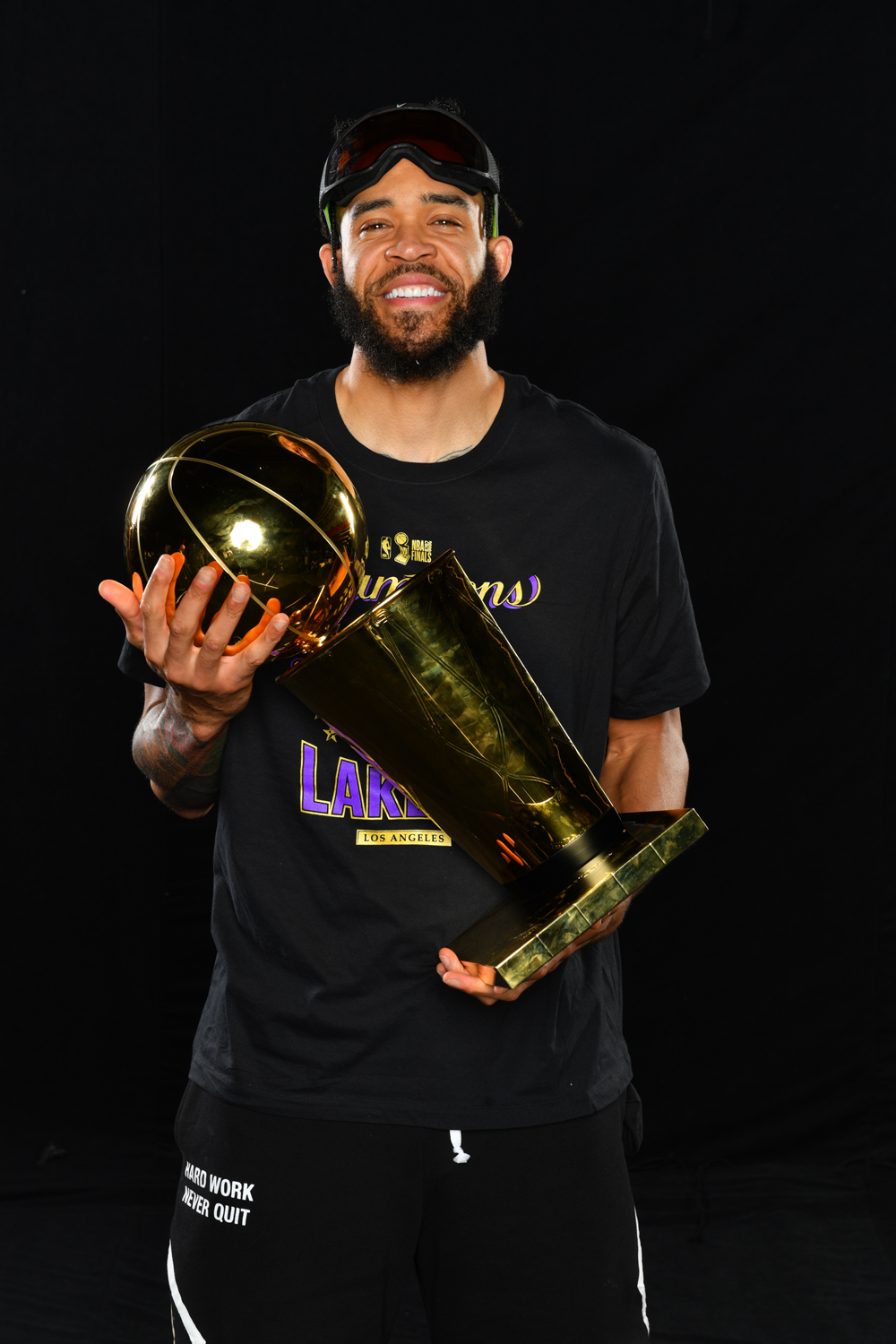 “Naturally, we gravitated toward each other when we became teammates, having so much in common and sharing the same goals. It’s truly amazing for him (Kuzma) to accomplish what he has in just three years in the league. I was very happy for him.”

Soon after winning the championship, Kuzma donated money to install and secure additional absentee ballot drop boxes around Flint. He has also returned to Flint several times to put on a youth basketball clinic. Last spring, he partnered with the Flint YMCA to provide more than 550 meals per week to senior citizens impacted by COVID-19 for six weeks. In December of last year, he hosted a free holiday party at the YMCA, providing dinner, treats, games and Lakers goodies for 60 local youngsters.

As of November, McGee was unsure if he was going to exercise his $4.2-million player option and return to the Lakers or become a free agent. NBA.com lists McGee as one of the top rim protectors in free agency if he goes that route. “No matter where I am at, the goal remains the same,” he said. “Win more NBA Championships.”