Words of wisdom from a humble, stylish, vibrant mother of five who has dedicated her life to empowering others. It comes as no surprise that her children have inspired her to create a legacy that has already impacted so many people in our community and beyond.

You see, LaTashia Perry is a woman on a mission. She wants you to believe in yourself, celebrate your uniqueness and boldly pursue your dreams, no matter how big or small. Her own path wasn’t always so clearly defined, but that’s the incredible power of living with purpose. As soon as you find yours, the possibilities are endless. “Everything I do is intentional,” reflects Perry.

Born into a family big on education and teaching, Perry initially set out on a similar journey, enrolling at Eastern Michigan University. As a Flint native and Southwestern Academy graduate, she isn’t shy about leaving her hometown behind. “At first, the mindset is like ‘when I graduate, I’m getting out of Flint!’” she admits. She took an unexpected fork in the road and returned to the area to raise her own family. “I have this whole new love for it. There are so many gems in Flint!” Perry says, proudly.

One of them is, of course, the stunning Applewood Estate. Every Friday throughout the summer season, the sprawling former home of the Charles Stewart Mott family hosts a story time for local kids. Nestled in the impressively manicured grounds, guest readers often get a chance to share their own stories with a crowd of eager listeners.

“I know it’s hard to understand now, but just you wait, you’ll see how amazing being different can be,” reads Perry. The line is from her first published book, Hair Like Mine, which was dedicated to her two daughters, Cassidy and Carrington. As a black woman, Perry fought against her own natural locks for decades, straightening them daily to feel “pretty.” The birth of her first girl changed everything. “How can I tell her to love herself, but not practice what I’m preaching?” she explains.

It was a turning point. She chopped off all of her hair and chose to embrace it, instead. “I haven’t looked back!” laughs Perry, her gorgeous, shiny curls bouncing around her face. Little did she know, fate was already in the works. A few years later, she took Cassidy to her first ballet class. The four-year-old emerged, crying. She said, “I don’t want to go back. They’re mean there!” The source of her broken heart was her hair – the other kids had made fun of her. Perry knew it was an important teachable moment. They had a long talk and her daughter returned to ballet class, but Perry knew she had to do more.

After searching for a relatable book, she couldn’t find one that would erase her daughter’s worry about not fitting in. The characters didn’t reflect Cassidy’s silky, brown skin or her curly, frizzy hair. So, after a few sleepless nights, Perry got up, grabbed a pen and got to work channeling her own childhood love of writing stories and poems that were once just tucked away. By dawn, she had written Hair Like Mine with an ending fit for their own story. 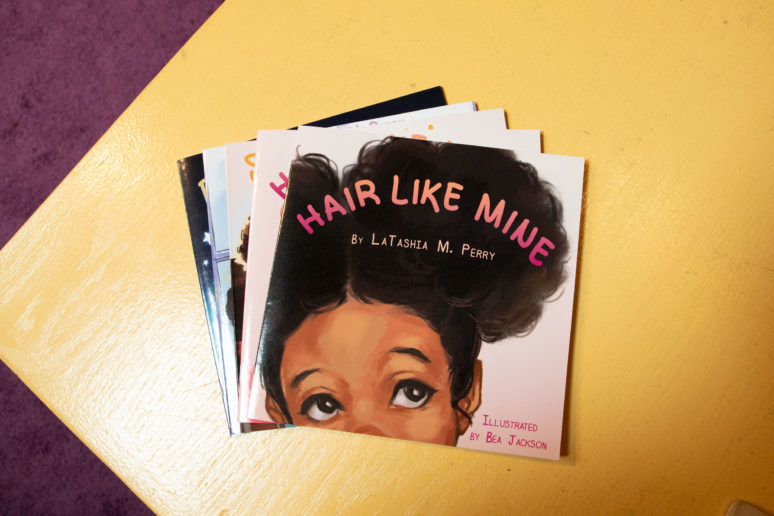 “We use our kids as the excuse for why we aren’t doing the things we want to do and the things we love. Switch it and make them the reason why you do those things – because they’re watching.”
LaTashia Perry

“It’s kind of cool to know there’s only one me in sight. I love my skin, my nose, eyes, and toes and this Hair of Mine … I like it just fine.”

With the unwavering support of her high school sweetheart (husband, Virgil), that first book in 2015 became the launch point for her own “Kids Like Mine” brand aimed at using positive images to empower  children. Her sixth book will be released this month (November 2018) and her kids have proven to be creative confidants, helping her craft shirts, bags and puzzles to match.

In the beginning, Perry had simple goals: sell a few hundred copies, grow her social media following, and have her book available at the Flint Public Library. She’s accomplished that and so much more, humbly revealing the joy she felt this past spring when it landed on shelves at Barnes & Noble. Perry was recently invited to share her work at the Congressional Black Caucus too, calling it a “beautiful experience.” Hair Like Mine has been translated in French, readily gets scooped up by teachers and well-known natural hair-bloggers, and was part of the 2018 ESSENCE Festival. 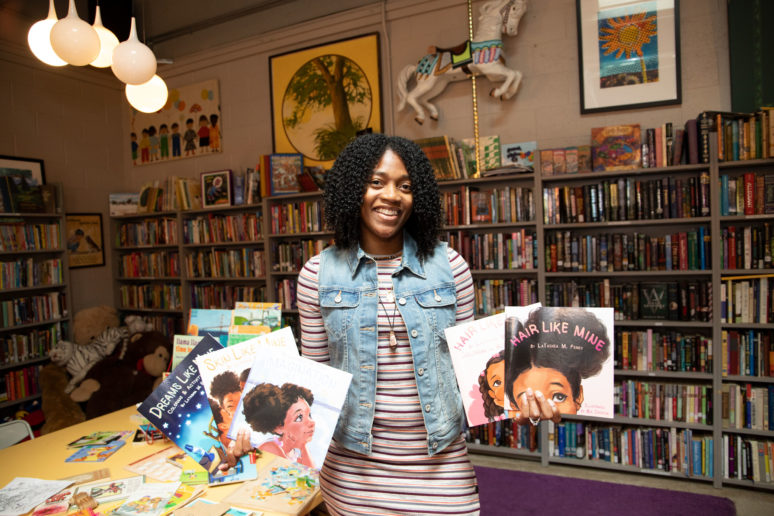 Perry lives her own mission, emulating her message of empowerment through the actions she takes every day in raising her family and serving her community. She practices daily affirmations with her kids while shuttling them to school. Perry is also a certified lactation consultant for MSU Extension in Flint, helping mothers impacted by the city’s lead health crisis. She draws on inspiration from years of helping at a shelter for runaway teens to make a difference, explaining, “We are all dealing with the same issues, you know?”

It seems Perry is just getting started. She’s currently working with Flint Community Schools to develop two mentor programs for middle-schoolers. They’ll be in good hands. Perry, known simply as “Tasha,” has a warm personality, infectious laugh and a knack for making friends wherever she goes. The students will undoubtedly leave her presence feeling more confident and prepared to face some of the most challenging times in their young lives. She is a true role model.

A constant flow of speaking engagements keeps Perry’s already busy schedule jam-packed, but even on her most trying days, she says it’s all worth it. “I’m grateful that I’ve been able to make an impact.”