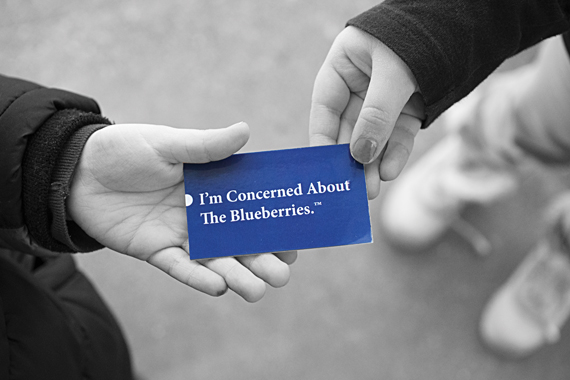 Fall 2014: A cryptic new billboard puzzles travelers on Interstate 69. It reads, “I’m Concerned About The Blueberries.” Chatter ensues throughout town, and news reports outside of Flint spread the message across the nation, all in an effort to search out the “true meaning” behind the phrase.

Some proposed that there was an environmental message behind it, logically assuming that the welfare of blueberries must be in jeopardy. Others thought more abstractly, assuming that the blueberries were a metaphor for one of the many challenges that beleaguer Flint. At the end of it all, the latter assumption proved to be closest to the author’s intent, but even when the mystery was revealed, there remained many furrowed brows.

The billboard’s author emerged within two weeks of its placement, and the man behind the metaphor turned out to be local businessman, Phil Shaltz. The story goes that while Phil was on vacation, he struck up a conversation with a young tour guide who seemingly had no reason to be downcast, but was nevertheless dispirited. The young man was distressed over the state of the blueberries; a prolonged draught threatened their growth. Having at first taken issue with the young man’s response, since it seemed like such a minor thing for someone to be concerned about, Phil later realized that he was personally guilty of a greater sin. True, the tour guide was fretting about something he could not change, but Phil was unconcerned about things that he could change. Upon his return to Flint, Phil decided to be “concerned about the blueberries” of everyday life, that is, the things that can be addressed in our community but are not. He also decided to prompt the community to get on board with his efforts by asking people to think about “blueberry” issues, which explains the cryptic campaign.

Noble efforts were met with a fair amount of criticism. It’s a waste of money! many decried in response to the billboard. It’s a waste of time! cynics said. Talk died down just as quickly as the initial chatter had begun. But then a remarkable thing happened. After all the criticism directed at Phil had quieted, rising from beneath the ashes of the initial fire storm of critique was the resounding clamor of people who thought the effort was brilliant. The praise came from real everyday people who were willing to invest themselves into the program. One of the more prominent supporters of Phil’s efforts was Flint Journal editor Marjory Raymer, who decided to partner with Shaltz to publish “Blueberry Stories,” accounts of positive things happening in Flint as a result of the inspiration taken from the billboard.

Public desire for positive news has gained momentum over the past year, and the most interesting attribute of positive news is its ability to instill a desire in people to make positive news of their own. This is where Phil and Marjory’s most recent efforts come into play. The two have visited ten area schools in search of what they’re calling “Blueberry Ambassadors.” These representatives will be charged with doing random acts of kindness. Such acts have the potential to earn a $1,000 or $500 donation to their school’s enrichment programs, which are often the first to go during budget cuts. From February to May 2014, students at participating schools have “Blueberry Cards,” which are to be given to the recipient of an act of kindness as motivation for that recipient to pay it forward and do something kind for someone else. Students can volunteer to be an ambassador on behalf of their school, and schools will choose their respective representatives. The students’ efforts will be published in The Flint Journal and the public will be able to vote on the acts of kindness they like most. Winners of the public poll will receive the donations.

While the program focuses on grades six through 12, with participation open to colleges and universities, a special dispensation has been granted to fourth graders at Gates Elementary in Davison for their enthusiastic desire to participate. Phil and Marjory were taken aback by the response of this group of students, claiming that their enthusiasm is a breath of fresh air. These fourth graders see the blueberries plainly as an opportunity to help their community and school. They say, “Why wouldn’t I help if I can?” This view is a far cry from the apathy emanating from many adults. It’s amazing how nine- and ten-year-olds put things into perspective. Children get why this matters, so why don’t adults? Lord knows that our community will not hurt from random acts of kindness, so what does the original motivation and execution really matter?