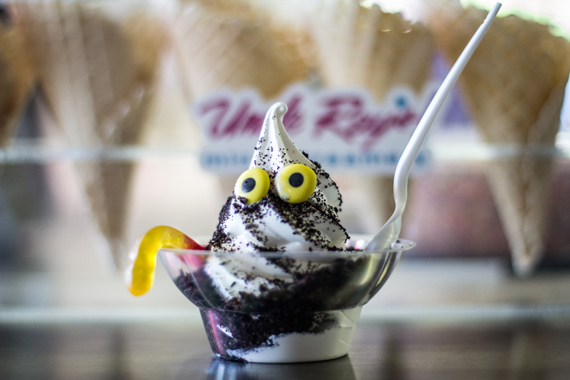 “Mom, I want an ice cream cone with eyes!” That’s what my kids used to say and what my grandkids now say when we head to Uncle Ray’s Dairyland in Fenton. And the micro-creamery isn’t just an ice cream place, it’s a destination. From the variety of frozen yumminess to the friendly service and the mini-golf course, Uncle Ray’s provides Genesee County ice cream lovers with a unique experience. Ray and Maryalice Durant were the original owners, and the family-owned business is now operated by their sons, Dave and Todd. Todd is the ice cream maker, whipping up fresh batches on the premises every day. Dave is the friendly “frontman” and entrepreneur of the business.

A teacher at Lake Fenton High School for 25 years, founder Ray Durant decided to open a soft-serve ice cream stand for something to do while off work for the summer. “He liked ice cream,” said Dave, “and he thought it would be fun.” In 1979, Ben & Jerry’s Ice Cream became popular, but Ray knew he could make better premium homemade ice cream, due to his secret ingredient: a high butter fat content. For years, he made the ice cream in an apartment behind the store, and the menu also included submarine sandwiches and Coney dogs. In 1987, Ray went into the ice cream business full time and moved to the shop’s current facility on North LeRoy Street. There, he added a miniature golf course which enhances the family fun. Treats can be ordered at the walk-up windows or in the drive-thru and enjoyed inside the store or outside where a heated canopy keeps customers comfortable even when the weather is chilly.

Many delicious memories have been created at Uncle Ray’s Dairyland, which serves more than 1,000 customers a day during peak season. Just recently, a 27-year-old patron walked up to the window and ordered an ice cream cone with eyes. “That’s what I remember from my childhood,” she smiled. Serving cones with candy eyes began years ago, when a 1978 poster at the shop pictured a cartoon ice cream cone with eyes. Kids started asking for a cone with eyes, just like the poster depicted, and it has become an Uncle Ray’s tradition. Back then, “ice cream cones were 49 cents,” Dave remembers, but they’re just as popular now as ever.

Now, Uncle Ray’s sells more than 10 flavors of smooth and creamy soft-serve ice cream, 20 flavors of Uncle Ray’s homemade ice cream, and a relatively new customer favorite: frozen yogurt. Thanks to a machine Ray discovered when traveling to Florida, Dairyland offers more than 100 flavor combinations of the frozen treat. Premium frozen yogurt is blended with fresh fruits, including peaches, blueberries, strawberries, raspberries, banana and pineapple. “Peanut butter frozen yogurt is our best seller, and it’s not even on the menu,” exclaimed Dave. Waffle cones are handmade, and the award-winning frozen yogurt pies and ice cream cakes are also customer favorites. The cakes are made with five delicious layers of chocolate cake, fudge, ice cream and whipped cream. Uncle Ray’s is also known for its famous six-foot banana split. But that’s not the biggest banana split they’ve ever served. When the city of Fenton celebrated its 150th and 175th anniversaries, Uncle Ray’s was on hand to build a 150-foot and a 175-foot banana split to make the celebrations just a little bit sweeter.

What’s the secret behind the success of Uncle Ray’s? Dave said his mother Maryalice often told him, “You’re only as good as your last ice cream cone.” “We’re not in the ice cream business,” says Dave, “we’re in the business of fun.” Fun is such a priority at Dairyland that it’s known as a fun place to work. The store’s 30-member staff prides itself on fast, friendly service with a smile. “We try to create a feeling you can’t find anywhere else,” says Dave.

Are you interested in purchasing photos from this story? Go HERE and select the “Uncle Ray’s Dairyland” category.