IN late June, the University of Michigan-Flint held its first ever GEMS (Girls in Engineering, Math and Science) day camp for middle school students. My City Magazine sat down with Dr. Chris Pearson, Professor of Physics and Associate Dean of the College of Arts & Sciences, who organized this exciting event on the Downtown Flint campus. 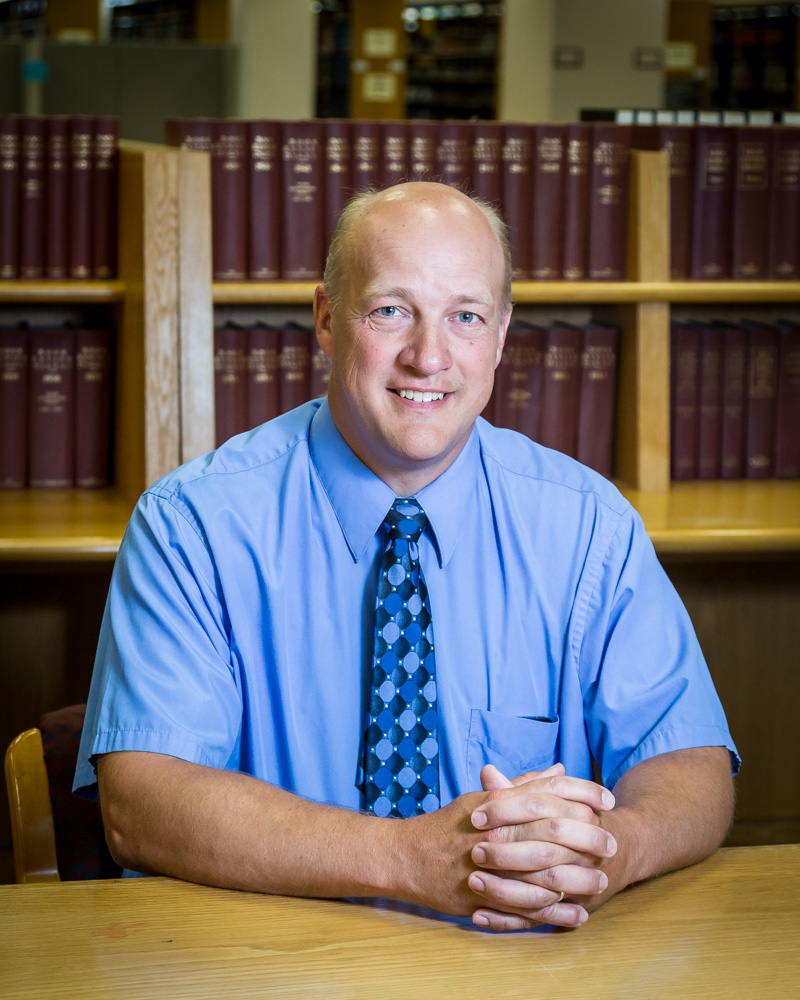 “It was a great success!” Pearson shares. “We were told to be conservative and aim for 20 participants this first year and we had 35, so we were very happy. We just opened it up and let everyone come who was interested, and they had a great time.”

The program was motivated by research showing the low number of females making up the STEM fields (science, technology, engineering and math). According to Pearson, “In physics, computer science and engineering, females make up less than 20 percent of the involvement and around 40 percent in the rest of the STEM fields.” He states that research also shows that girls tend to lose interest as early as elementary school and certainly middle school. “If they haven’t been encouraged or exposed to the possibility of working in a STEM field by middle school age, the opportunity is pretty much gone,” he says.

Pearson explains that is why they wanted to attract students of middle school age and show them what types of fun activities are involved in these fields, in case they hadn’t thought about it or had the chance to. “There are other socioeconomic elements that come into play,” he says, “so the numbers of involvement for those in a lower economic bracket are even less than 20 percent.” The GEMS program aims to encourage anyone who is interested to keep pursuing it, or to show other kids what is available in these fields to get them interested. 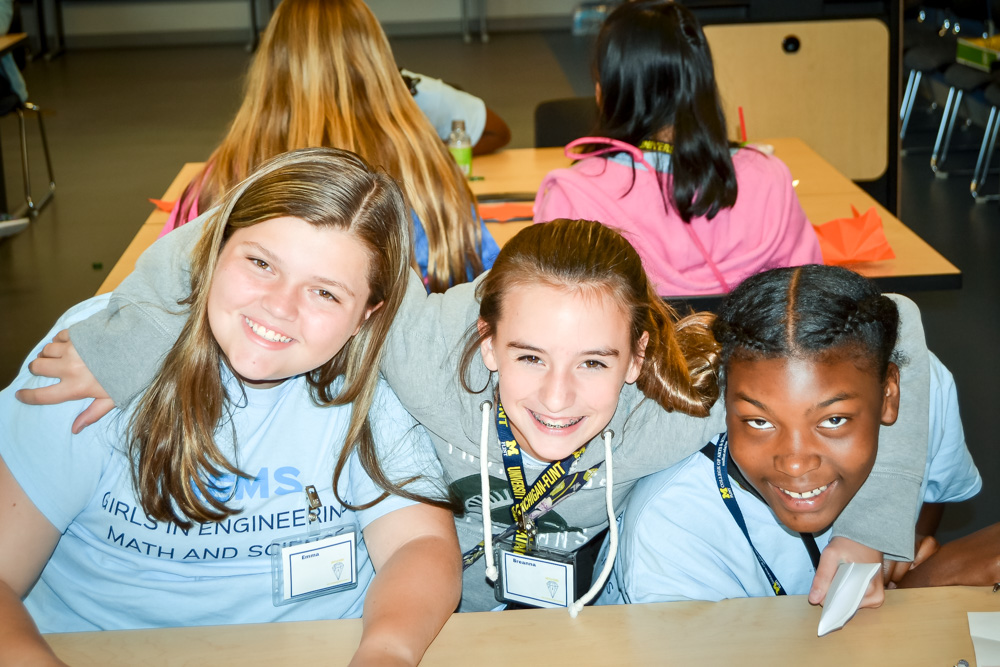 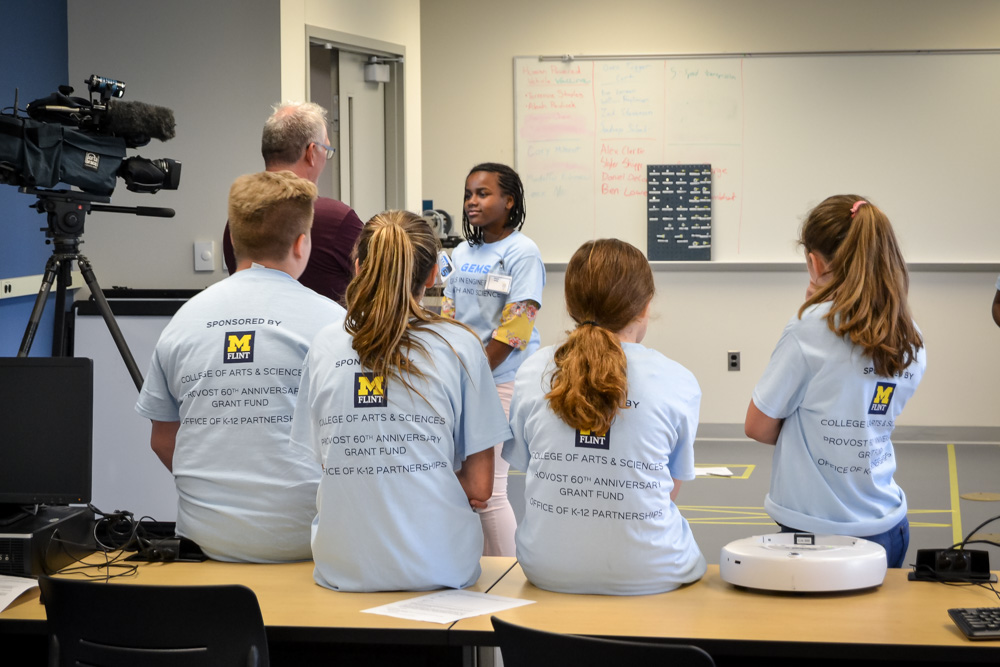 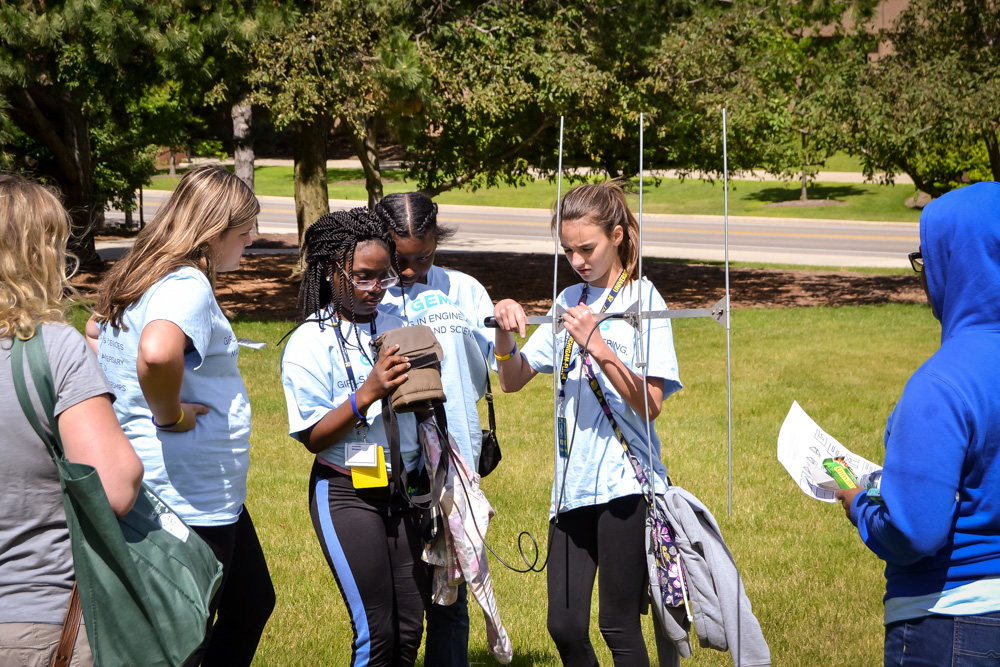 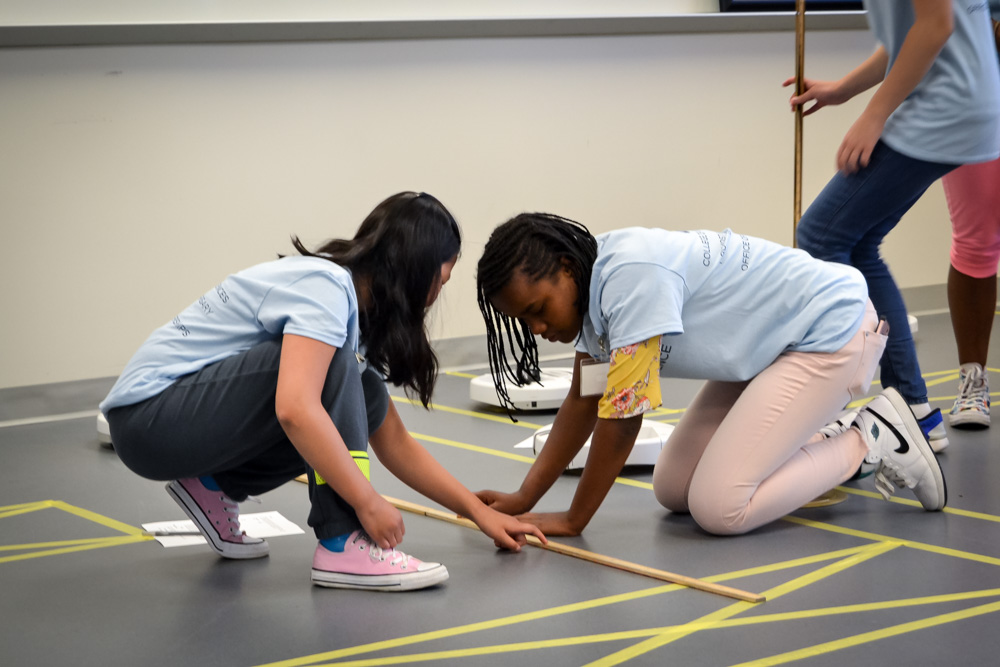 The UM-Flint GEMS program was developed along with professors from all of the seven areas of discipline in the Murchie Science Building, including: Biology, Chemistry, Physics, Math, Geography Planning and Environment, Engineering and Computer Science. Pearson wanted participants to have an experience from each of those areas, so he worked with faculty to develop a 75-minute, hands-on activity to engage in with a professor from the discipline, and then move on to the next activity – that way, they stayed busy and involved.

One activity in the Computer Science field challenged the campers to program a robot to follow a grid marked on the floor. The activity used an iRobot Roomba and a program that taught the kids to write a script that would direct the robot to follow directions such as, “go forward 90cm.” They also had to figure out how many degrees to program the robot to turn. Pearson explains that some of the challenge is, “the robot won’t go exactly forward, because there is always some kind of uncertainty,” and the exercise helps teach the possibilities of these new skills and ways to problem-solve while having fun.

Other activities included a tracking exercise that corresponded with a study being done by one of the Biology faculty members, in which they glued sensors to the shells of turtles to track their movement. Rather than use real turtles, the UM-Flint GEMS activity involved a sensor attached to a stuffed turtle hidden on campus and taught the kids how to use a tracking device to find it.

All of the activities were engaging, challenging and amusing enough that the camp program could easily be expanded. “The most common feedback we received from the campers was to make the program longer!” Pearson exclaims. He hopes to expand it next year, hopefully through the help and support of other partners, since this year’s camp was a solo project within UM-Flint. He would like to offer the program in a residential camp format. “We have dorms on campus – so that will be the next step – to try and make it longer and allow the UM-Flint GEMS to stay on campus,” Pearson explains.

If you are interested in these types of programs and missed the GEMS day camp, Pearson would like to reinforce the idea that the UM-Flint campus is part of the Flint community and has a lot of other programs to offer, as well. They include Curiosity Academy, a year-long after school club for girls in 6th-8th grades which is a collaboration between UM-Flint, Kettering University and Longway Planetarium. Other on-campus programs include: Super Science Friday, an annual Science fun day; Astronite, a free, family open house celebrating astronomy; the STEM open house in the fall, and Family Math Night in November. For more about the programs and activities at UM-Flint, visit umflint.edu/cas/calendar or find them on Facebook.