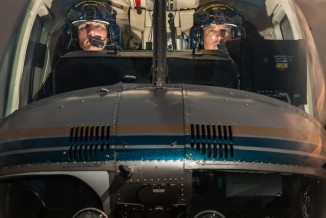 Throughout his two decades in law enforcement, Trooper Don Zinz has saved lives and has apprehended dangerous criminals. He’s been a part of police actions that made national headlines and has won several awards as a result.

An unassuming, humble man, Zinz does not view himself as a hero, however. Like thousands of others who regularly don a uniform and pin on a badge, he is simply a dedicated public servant doing his duty. “The recognition for bravery and other awards I have received are kind of nice, but, for me, it’s all part of the job,” he said. “I don’t get caught up too much in awards, but just try to help other law enforcement agencies and fellow officers in any way I can and serve the public.”

These days, Zinz serves as a pilot of one of two Michigan State Police helicopters. He operates out of airports in the Flint, Saginaw and Bay City areas. The other aircraft is based in Lansing.

“Basically, we try to be the eyes in the sky for area law enforcement agencies,” he said. “Obviously, we can get to a crime scene faster than officers on the ground and watch over it, looking for any information we can relay to them. We’ll also aid in searches for suspects and missing persons and keep an eye on traffic stops involving officers without partners.”

The 51-year-old Zinz actually began flying at age 23, but was unable to find steady work in the aviation industry, so he returned to school, earning a criminal justice degree from Delta College and joined the Michigan State Police in 1996. The Saginaw native eventually became a member of the state police’s Emergency Support Team and earned an award for bravery for his actions during a 2003 standoff with Michigan Militia member Scott Woodring in Fremont which made national news. He was among the officers who stormed Woodring’s home to serve an arrest warrant which resulted in the death of fellow state trooper Kevin Marshall. Zinz helped evacuate Marshall from the scene. Unfortunately, he later died during surgery. Woodring was killed by police when he drew a rifle on them two days later just prior to Zinz beginning his shift. 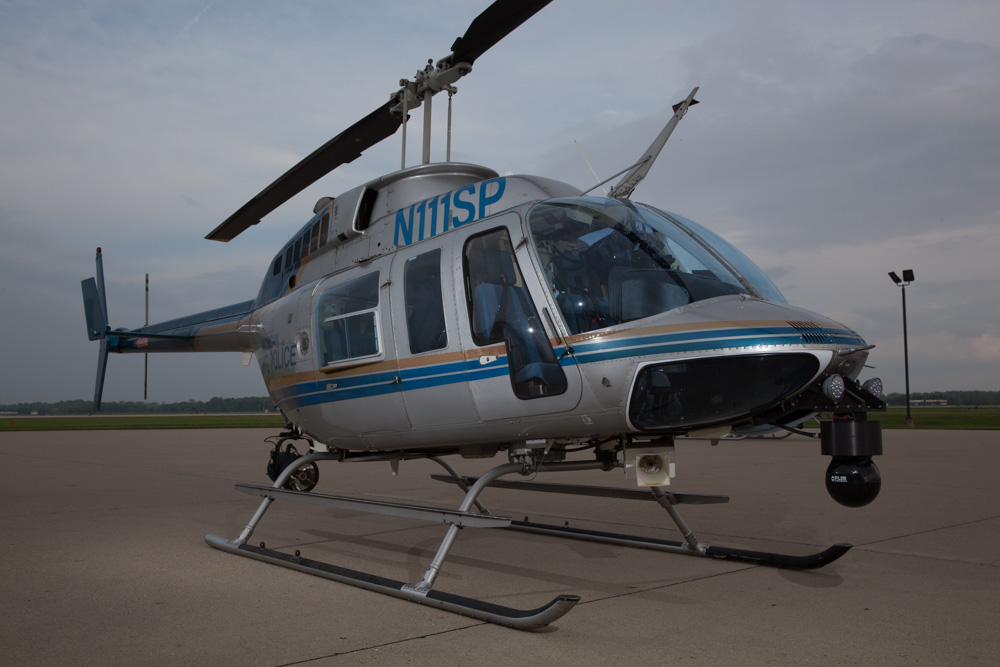 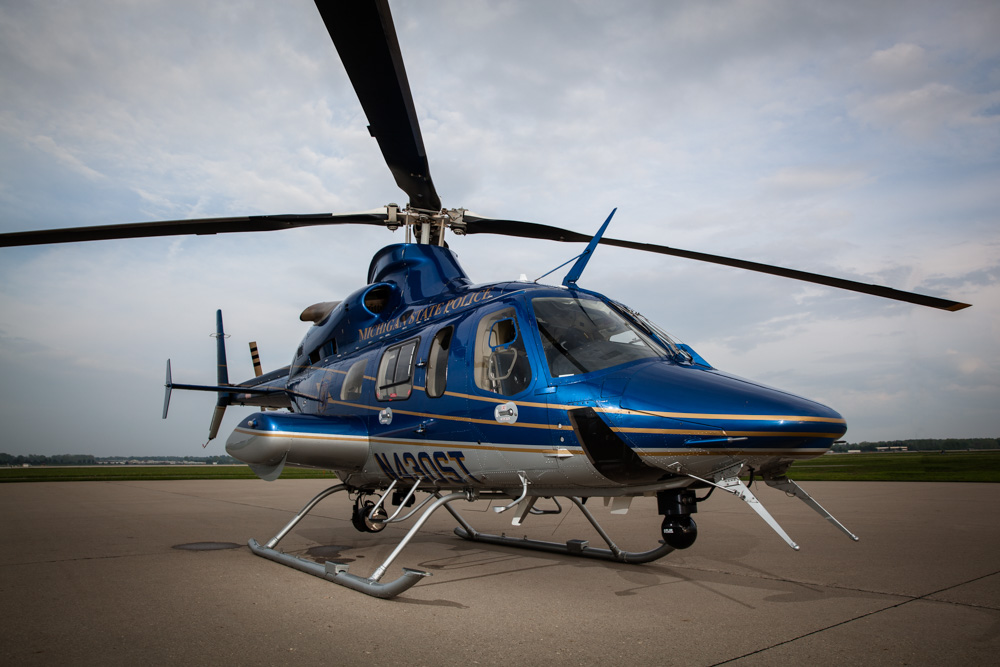 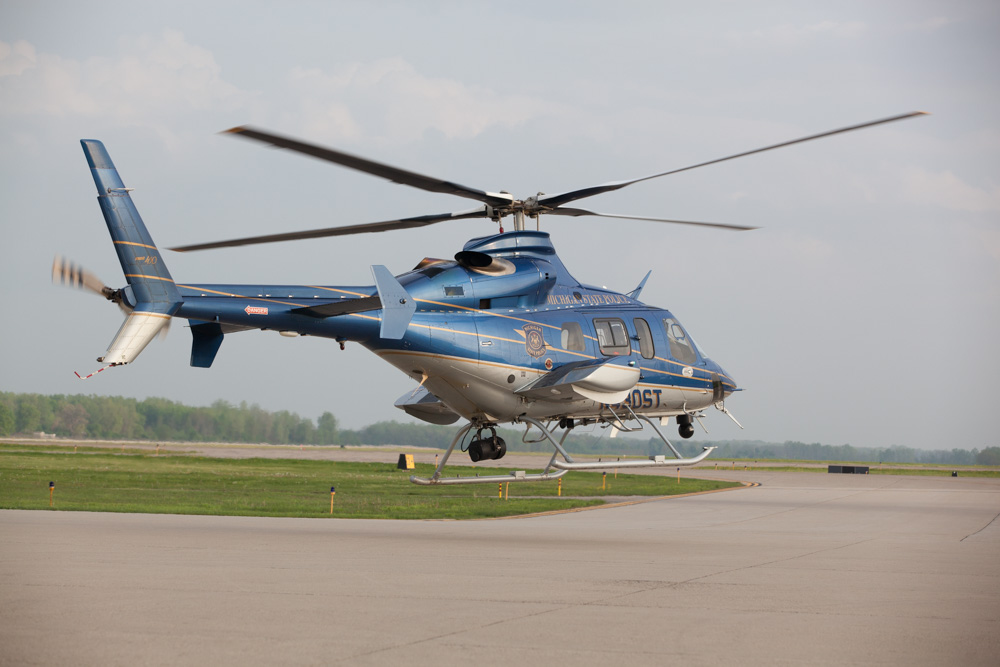 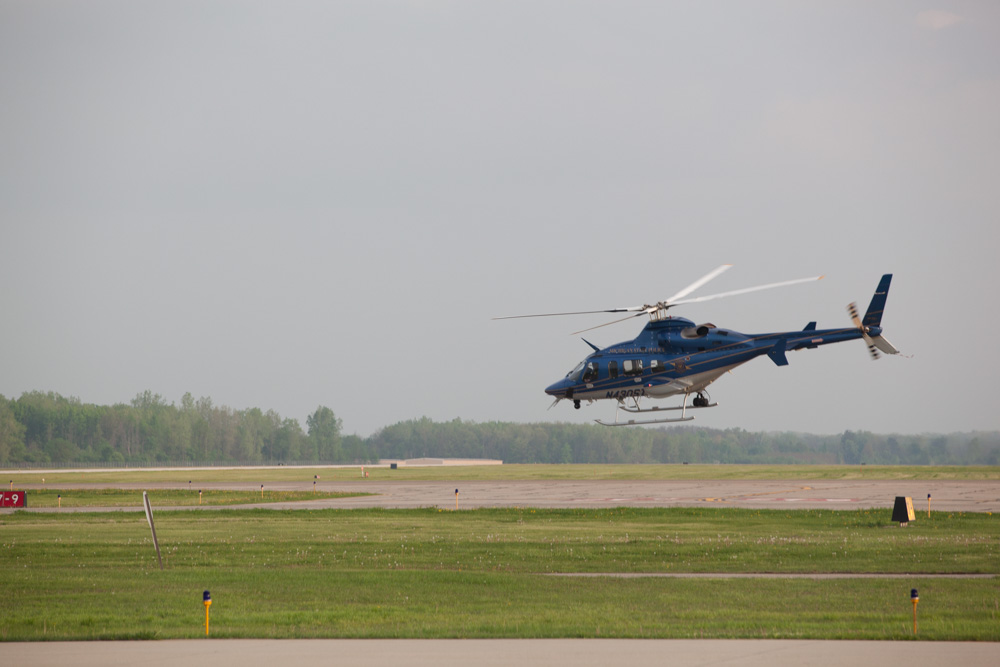 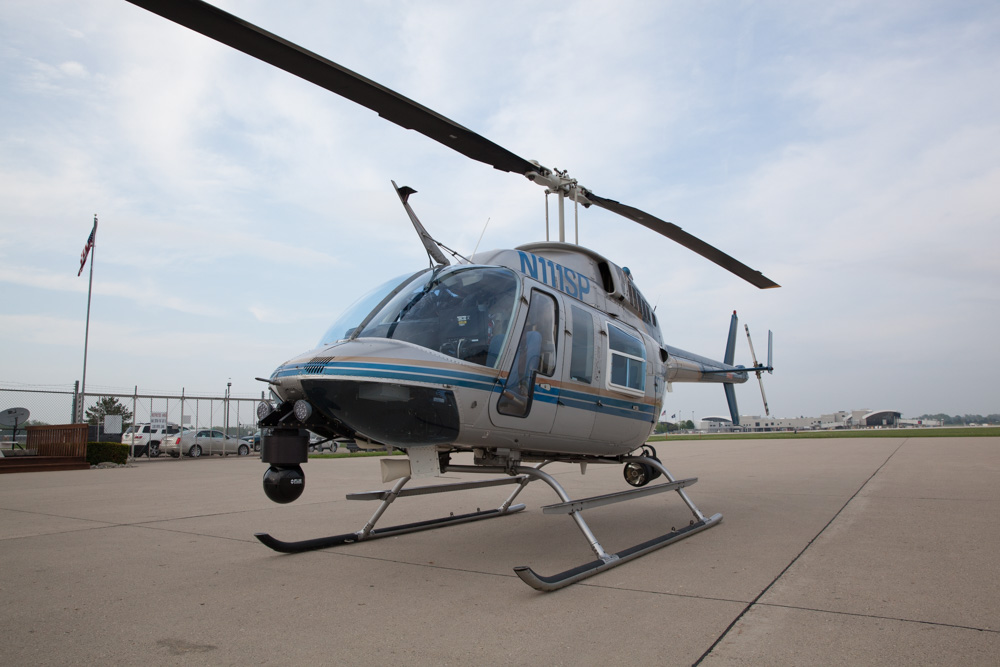 Among other acts, Zinz gained the trust of a throat-slashing victim, which led to the identification and subsequent arrest and conviction of the attacker. He also assisted the U.S. Marshal Service in locating a 47-year-old man who was sending lewd letters to a 16-year-old girl. Zinz obtained a confession from the suspect, who was the victim’s former basketball coach.

In 2012, Zinz earned a Trooper of the Year award, but he considers his promotion to the State Police Aviation Unit about a year later his biggest achievement. “This is something I worked toward for years, getting all the proper certification and flying the 500 hours required,” he said. “It’s great because it combines my love of law enforcement and flying.”

Zinz’s shift begins at the peak of rush hour and ends in the wee hours of the morning.

He arrives at the airport, sometimes Bishop International, and begins preparing required paperwork and performing routine checks of the helicopter. “There are procedures we have to follow before we can take off,” he said. “I usually spend the first hour getting everything ready and then we go up, depending on the weather.”

Lift off! Zinz and his co-pilot are in the air, listening to scanner traffic and looking for any way they can assist officers on the ground, or reporting any suspicious activity or traffic problems they see. Every shift offers something different. “We try to be prepared for anything,” he said. “We are a big deterrent to criminals who try to flee a scene before the police arrive. We try to get over top of them quickly before they can do that. If they do flee, we try to catch up with them and alert police in pursuit.” 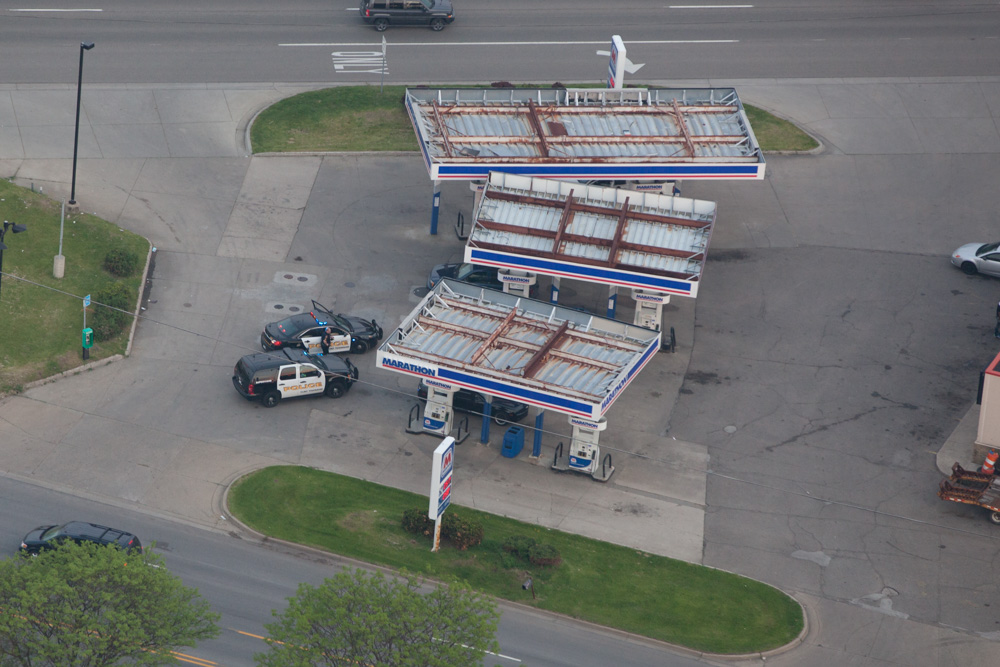 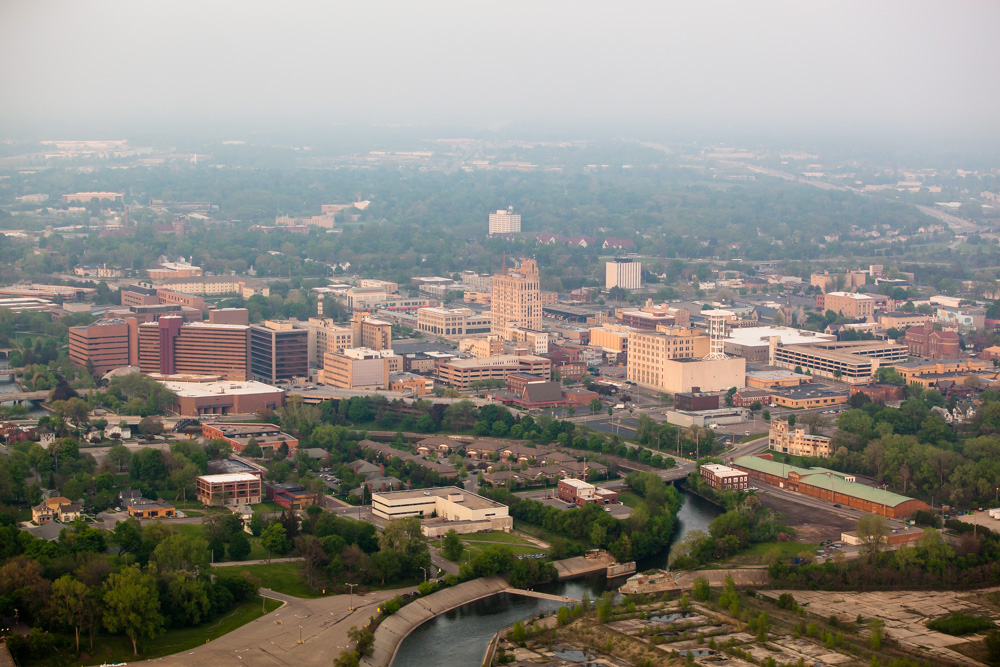 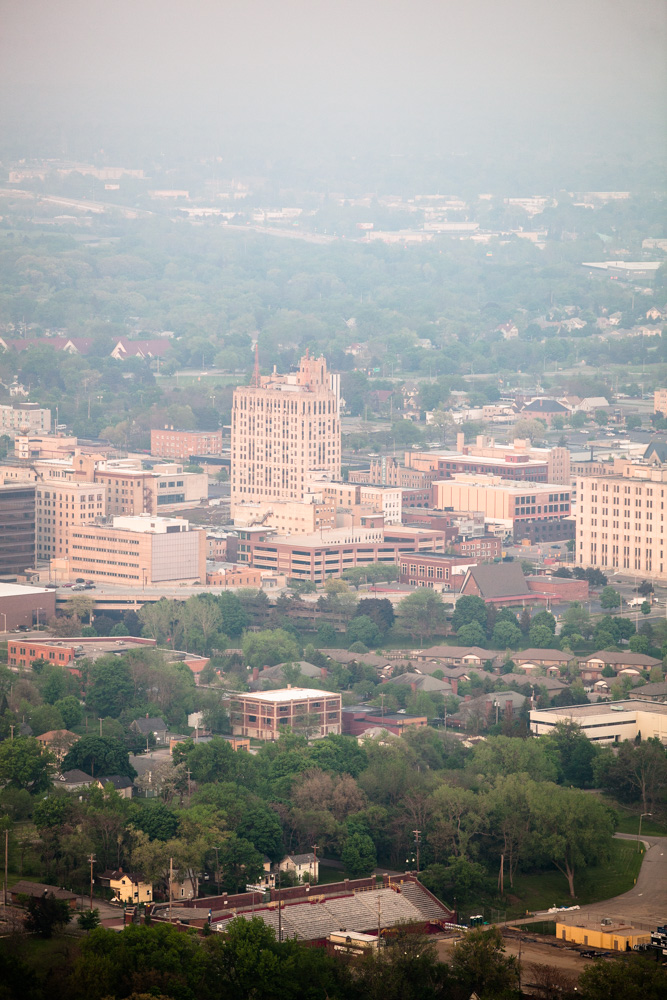 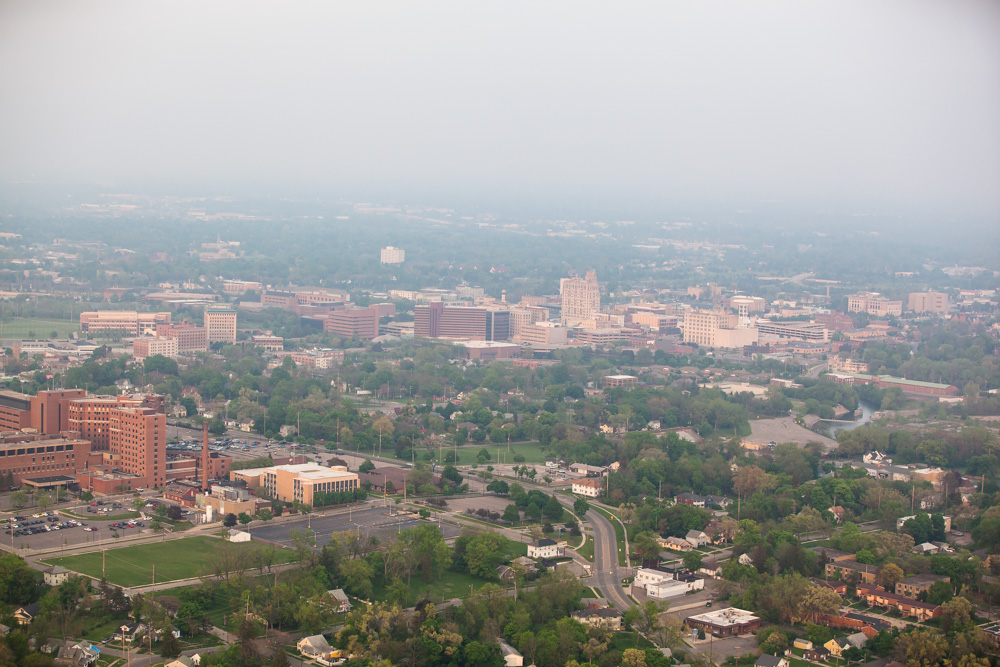 After roughly three hours of flying, the helicopter returns to the airport for re-fueling, affording the pilots a brief break.

Zinz and his partner are back in the air, continuing to serve as the eyes above for those on the ground. “Another thing we do is watch over traffic stops in which we know the officer is alone because we never know what can happen,” he said. “We’ll keep an eye on the scene until the officer gives us an all-clear. We also do our part in finding missing persons and hopefully bring relief to their families. We have received plenty of praise from officers on the ground for how we’ve helped them.”

Zinz is frequently summoned outside of the Tri-Cities area to assist in major operations. Last month, one such case made national headlines when sisters Lee Wright and Leslie Roy became stranded without cell phone service when their vehicle was stuck in deep snow on a remote, narrow road in the Upper Peninsula between Tahquamenon Falls State Park and the Lake Superior shoreline. For nearly two weeks, they managed to survive on Girl Scout cookies, cheese puffs and melted snow while awaiting rescue. 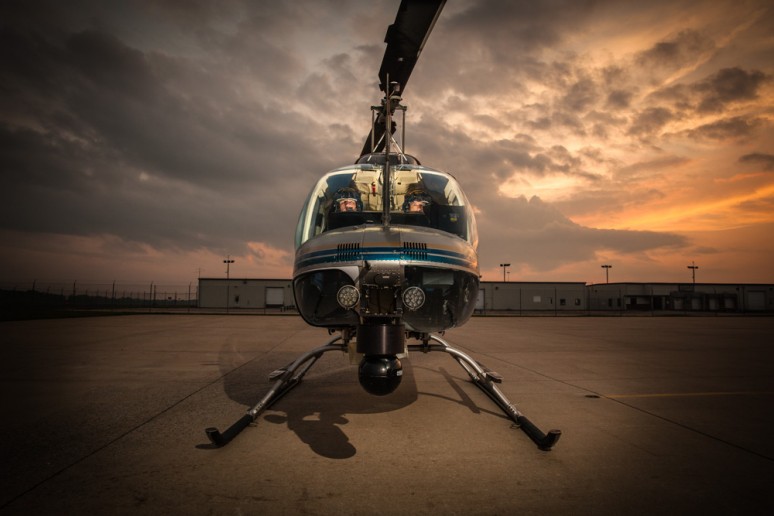 Thanks to Zinz and his crew, that rescue finally came on a sunny afternoon about 2:20pm. “We had received information they may have been trying to visit lighthouses and waterfalls in that area, so we searched the Eastern U.P. for a couple of days, grid-by-grid,” he explained. “Finally, my co-pilot, Sergeant Jerry King, saw a glimmer of light, so we circled back around and discovered that it was the sun shining on the windshield of their vehicle.”

Zinz found a place to land on the Lake Superior Beach near Crisp Point Lighthouse and two of his colleagues hiked into the woods to the ladies, who were too weak to walk out on their own. Fortunately, a family from Grand Rapids was driving ATVs in the area and drove them out to the helicopter. “Obviously, in that situation, you hope for the best, but you at least want to find people and bring answers and closure to the families,” he said. “It was a great feeling to find them alive and fairly well considering the circumstances.” 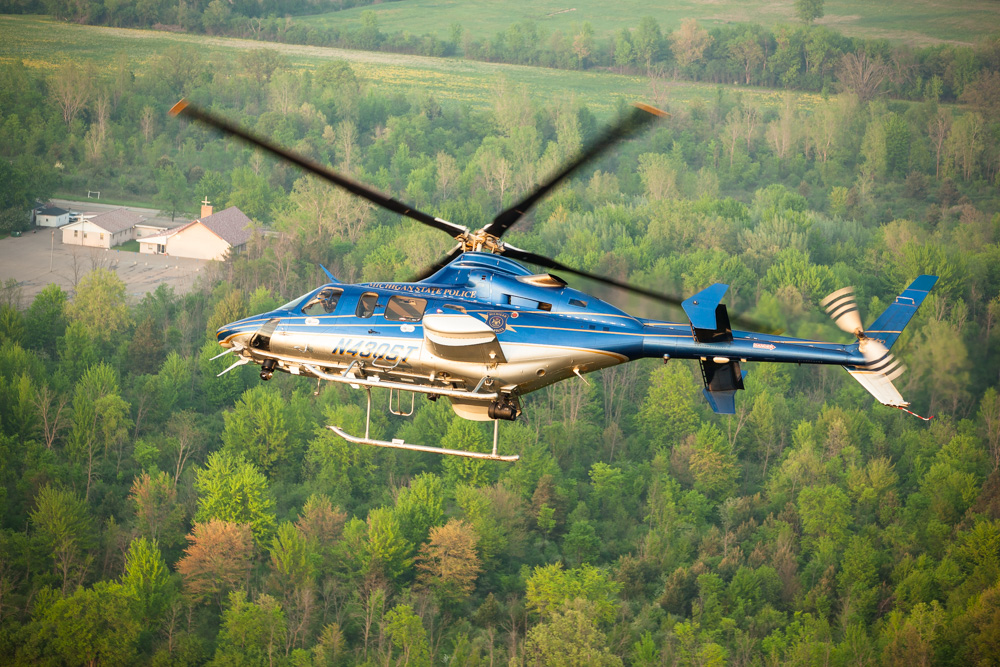 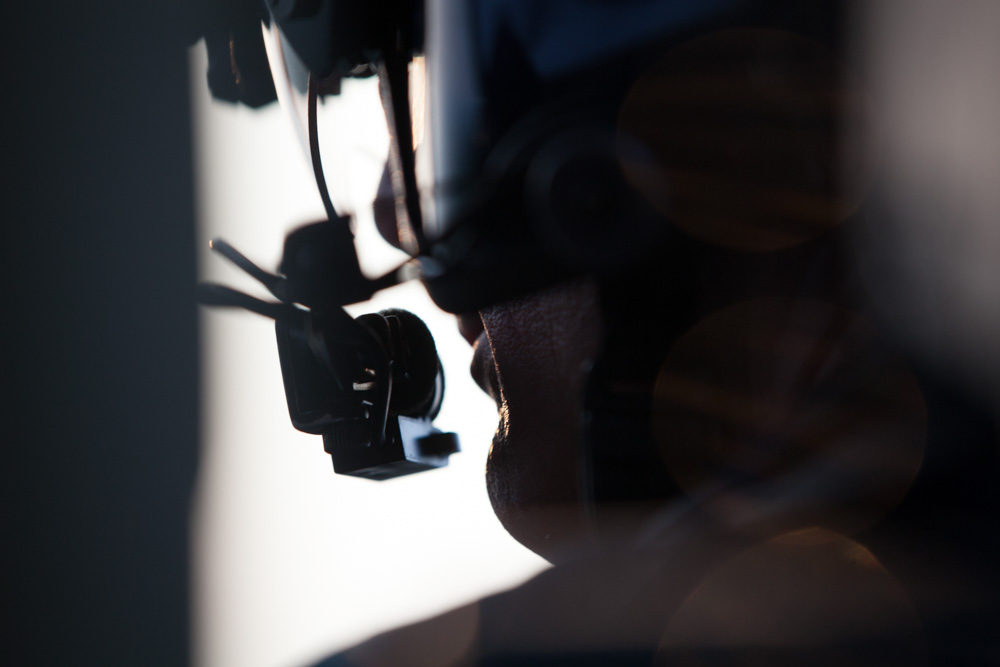 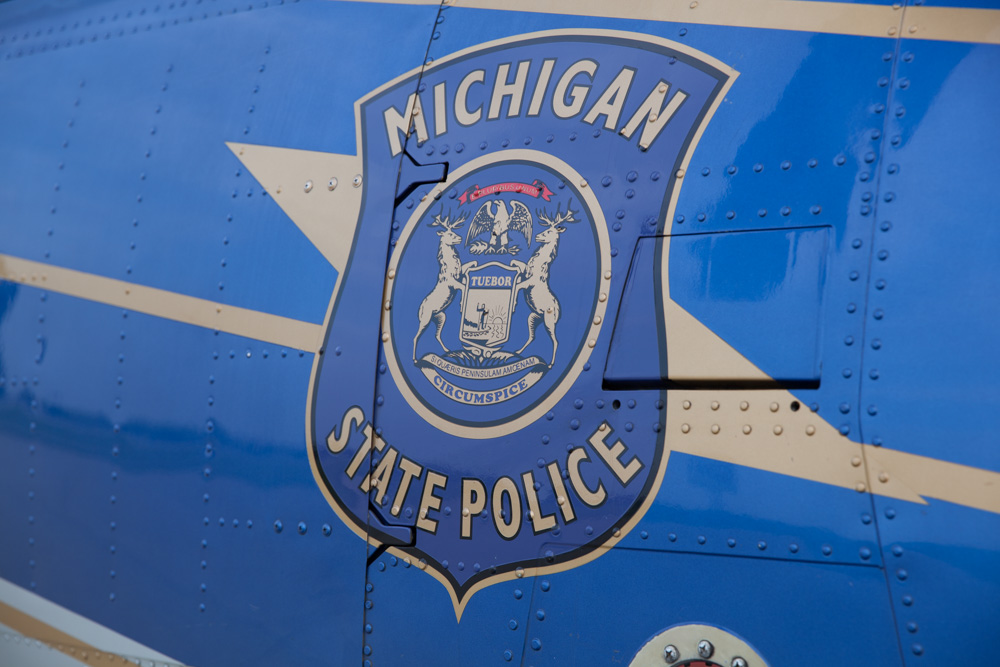 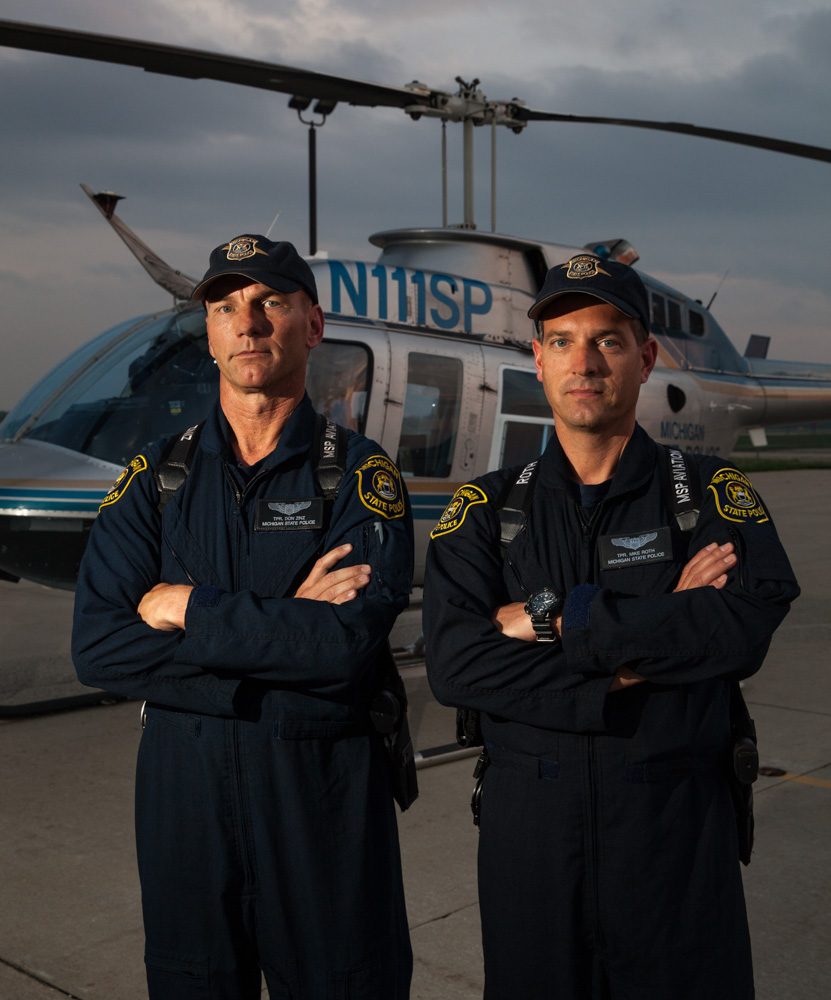 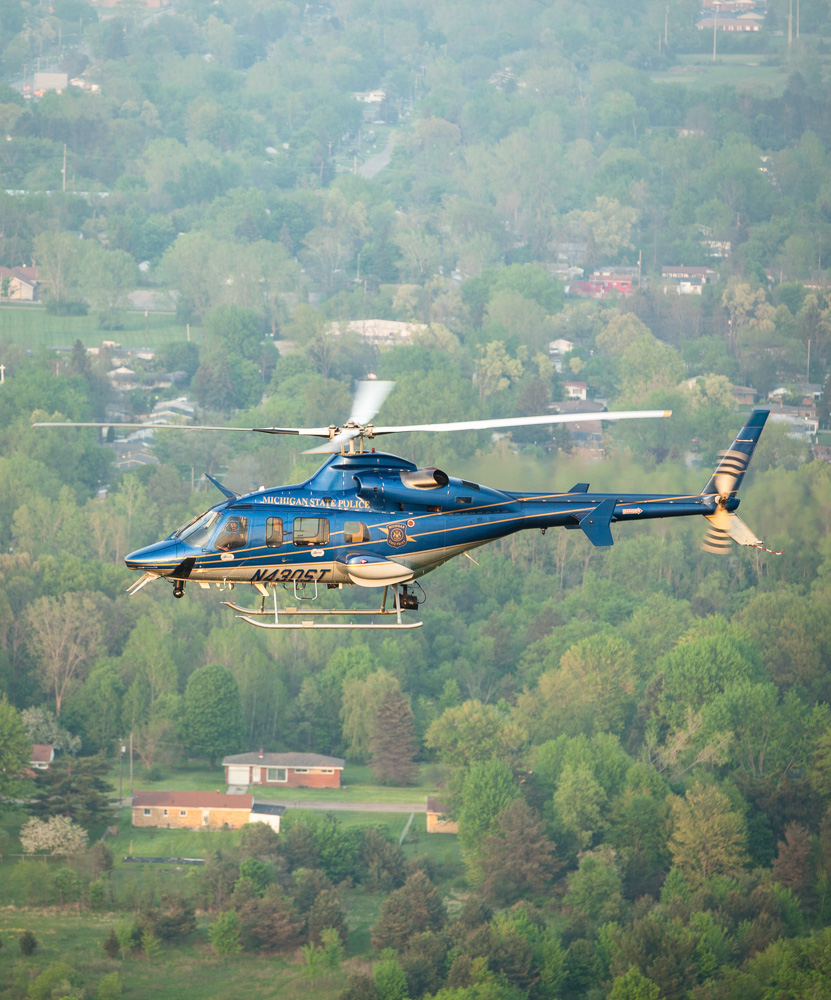 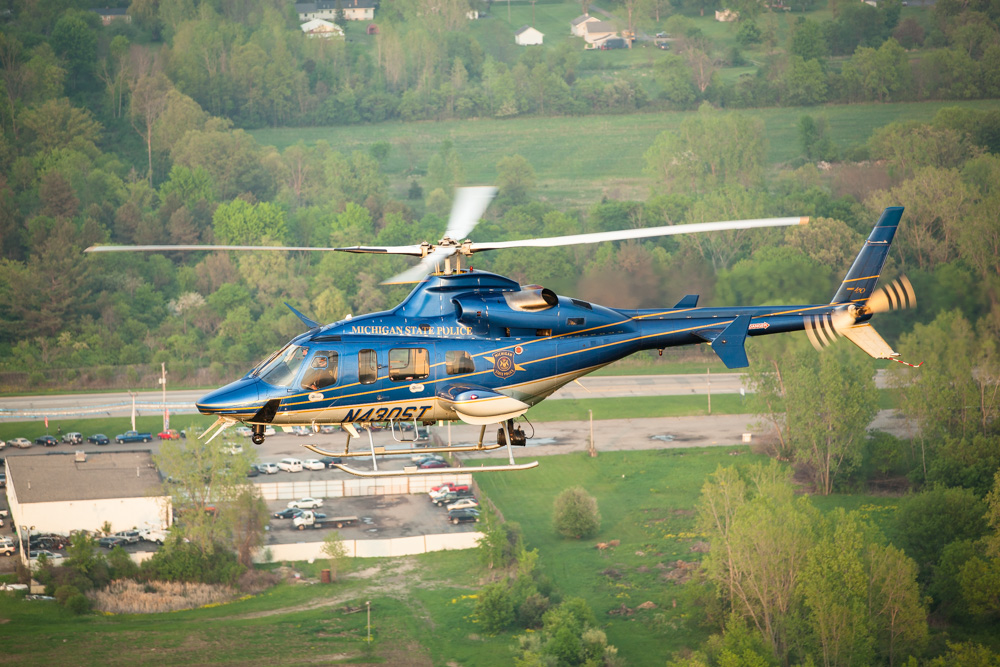 Zinz returns the helicopter to the hangar and begins his end-of-shift paperwork. Then, he drives home for some sleep before spending time with his wife and two children prior to his next shift. “I used to spend my free time flying, but now I get in plenty of flying on the job,” he said. “Now, I just try to enjoy quality family time when I’m home, like taking the kids fishing.”

It’s clear that Trooper Zinz’s life and career are flying high and he loves every moment. ♦
“Basically, we try to be the eyes in the sky for area law enforcement agencies. Obviously, we can get to a crime scene faster than officers on the ground and watch over it, looking for any information we can relay to them.”
-MSP Pilot Don Zinz
Pilot Don Zinz (Left) and Tactical Flight Officer Mike Roth