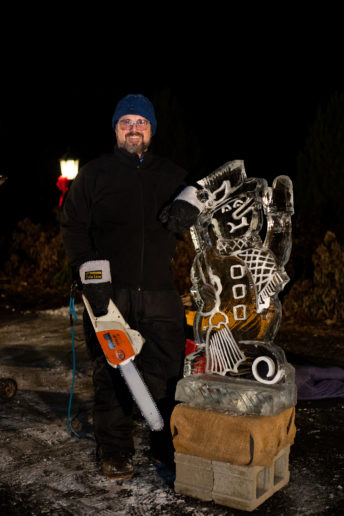 For Matt Cooper, the journey to professional ice sculpting was quite unintentional. “I was a young chef at a hotel when the owners asked me to do an ice sculpture for the buffet,” he laughed. “I did it and it wasn’t that bad! That was the start of it. I just always thought it was a cool thing to do.”

Now a world-renowned ice sculptor, Cooper is also an accomplished chef who has traveled the world sampling cultures and new foods, and an instructor in the Culinary Arts program at Mott Community College. “When I was that young chef just starting out with ice sculptures, I was asked by another chef, Brian Burkley, if I had ever competed in ice sculpting. At the time, I didn’t know that competitions even existed,” he says. “He was looking for a partner to do some two-man carving. We started local and had some success.” Soon enough, Cooper and Burkley found themselves at the World Ice Art Championships in Fairbanks, Alaska. “The goal for us in competition was to finish in the top five. In Alaska, we won the People’s Choice and Carver’s Choice awards and the judges gave us second place,” Cooper shrugs, shakes his head and laughs. “Oh well, we were really happy with the piece. They still use an image of it today on their billboards to promote the competition.” Cooper has fond memories of the experience and a piece of him still resides at the top of the world. “I have a sculpture in the ice museum in Fairbanks,” he proudly states. 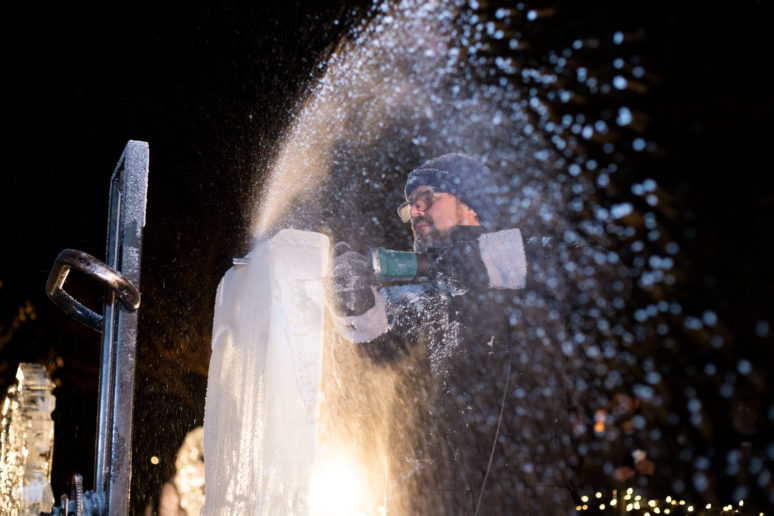 Cooper and Burkley worked well together and he learned a lot, but really, Cooper owes his expertise to an old friend from his younger days. “I had a friend, Chef Louie who worked at the Hyatt Regency in Flint while I was at the Sheraton on Pierson Rd. Both buildings are long gone now. I was starting to do some sculpting for the Sheraton owners and I asked Louie for help. He has been sculpting for a while. He took me to a freezer full of ice and let me carve whatever I wanted and practice there,” he reminisces.

Cooper says the hardest thing about working with ice is that it is a clear medium – it doesn’t work like drawing or painting. It’s not about what you create or add, but what you take away. “You have to think about what to take off the block to get to the final shape,” he explains. “If you take off too much, you can’t go back and add anything to fix it. If you do enough carving, you kind of start to ‘see’ the final piece inside the ice. It takes a lot of thought and I sometimes have to stop, reassess and adjust. It takes a lot of elements to work,” he states. 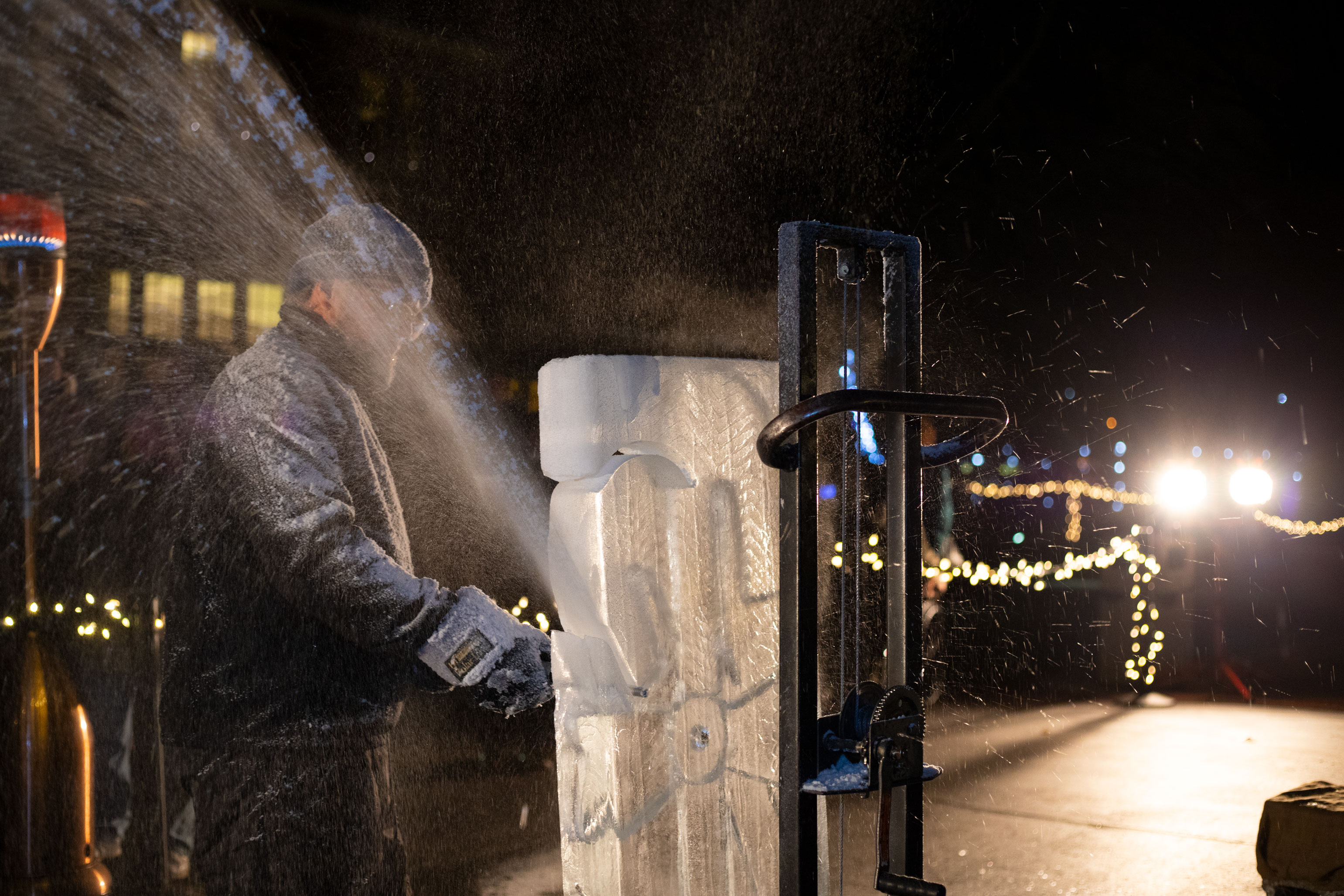 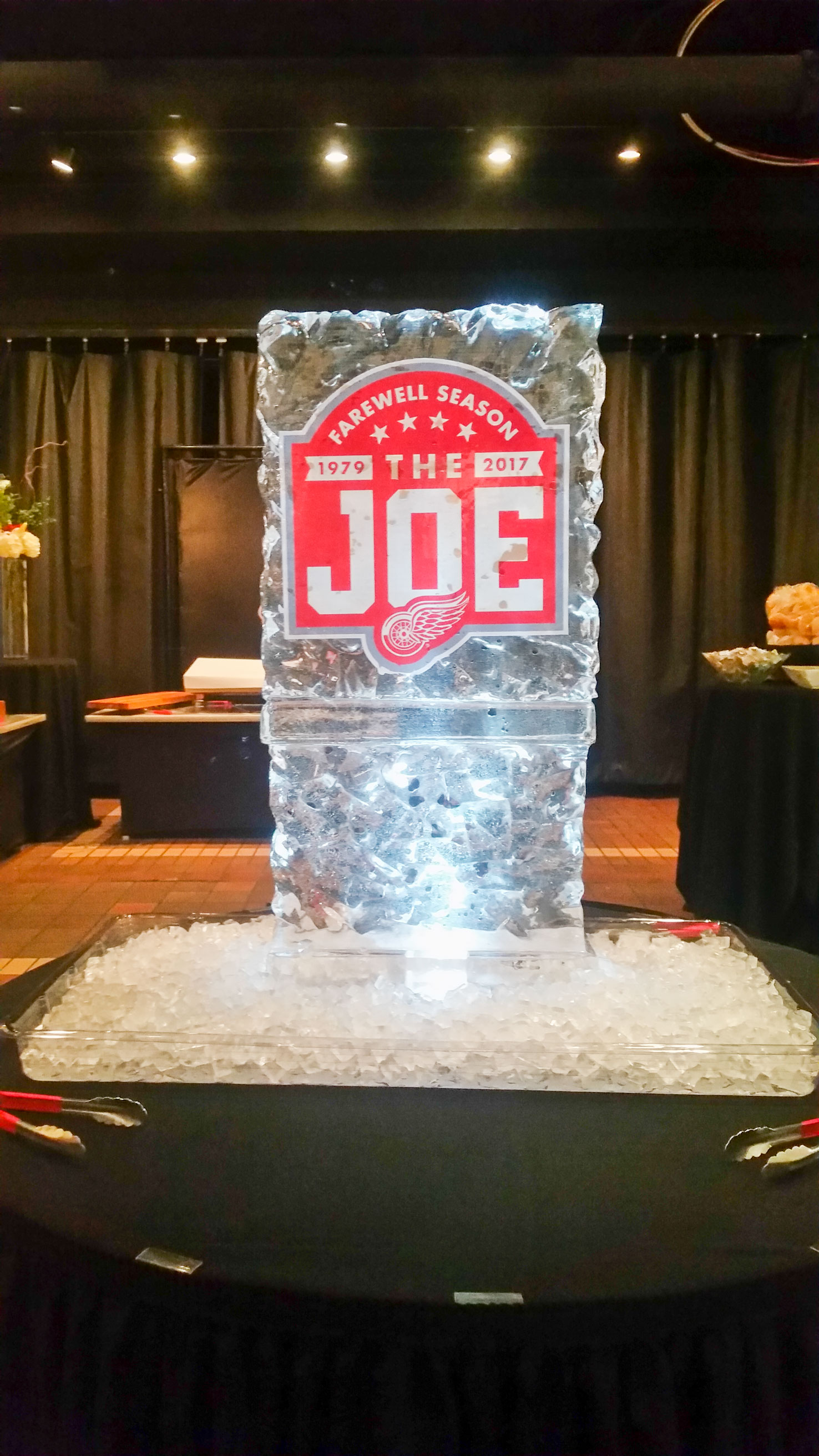 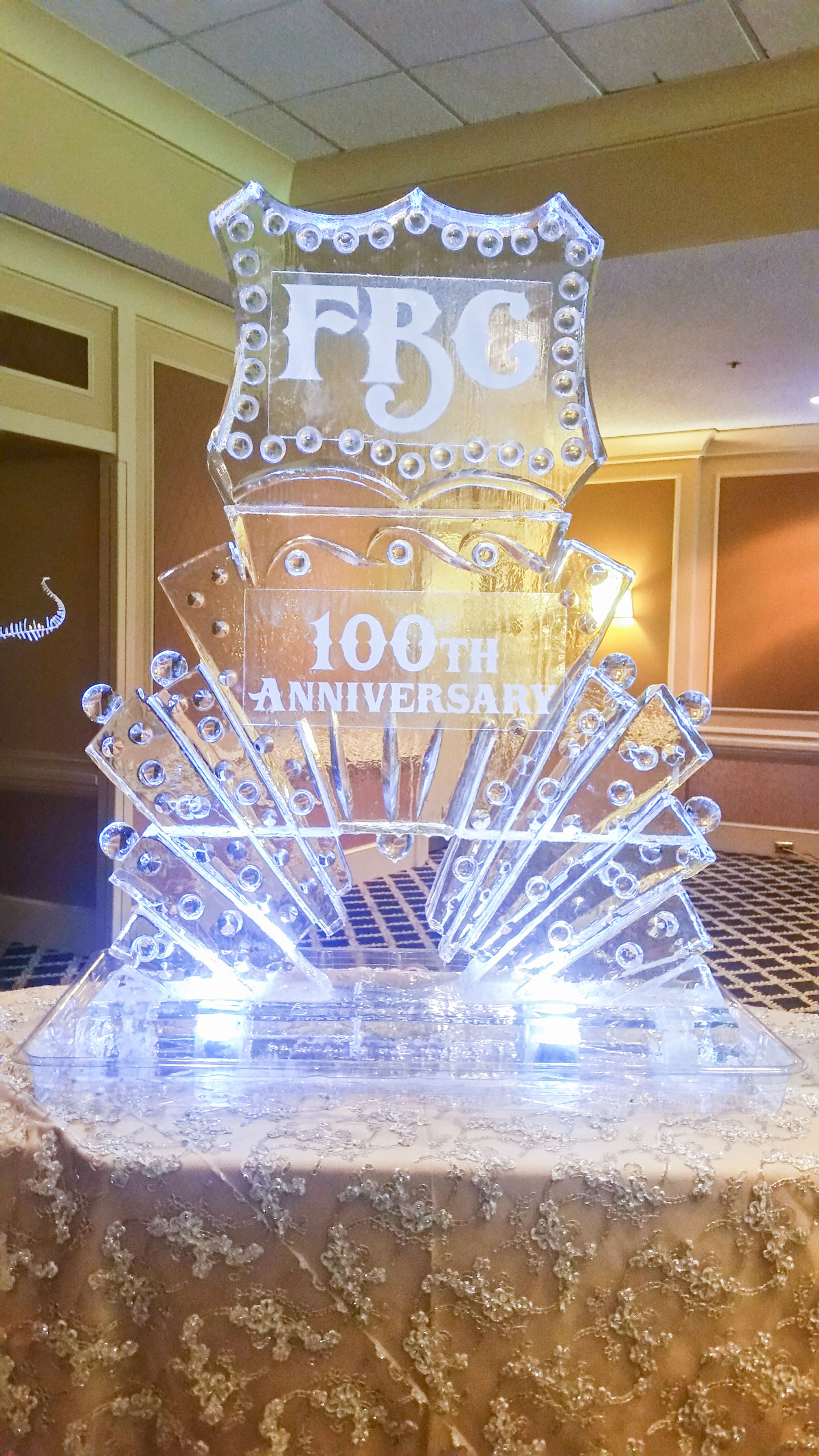 During sculpting competitions, people would often ask Cooper if he could make a sculpture for them and soon, due to demand, he started a business. “I started Icon Ice because it made a lot of sense at the time,” he shares. “When I decided to make it a small business, I purposely pursued large commercial accounts that had a freezer large enough to store the piece until it was finished – I wanted to enjoy my weekends at the lake,” he says. He started creating sculptures for Joe Louis Arena, large country clubs and for chefs he knew.

Life is constantly changing, however, and when Cooper married and had children, he decided to expand his business. “I’m so busy now, I sometimes feel like I’ve gone too far with it,” he says. “I mean, I have a good, regular job that I love. My biggest mistake is not being able to say no.” 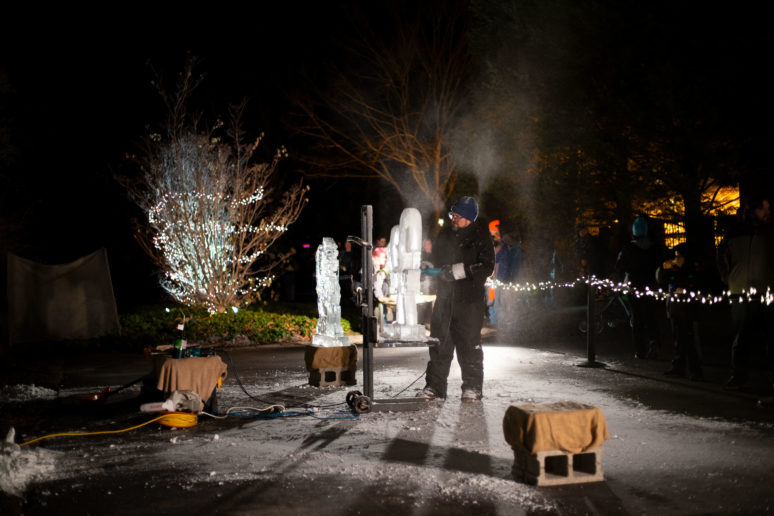 The holidays are always the busiest time of the year for Cooper and his staff at Icon Ice. During the first week of December, Icon Ice did 15 sculptures in Fenton and Cooper did ten in Vernon, alone. If you saw the sculptures at Applewood in December, that was Cooper’s handiwork. When December winds down, all of the New Year’s parties begin. Icon Ice usually stays pretty busy throughout the year.

Creating an ice sculpture takes ability, strength and resources. The artist begins with a block 20 x 10 inches thick and 40 inches high, on average. “The blocks weigh close to 300 pounds,” informs Cooper. Next, he creates a template on a roll of paper the same size as the block, or uses a projector. “Sometimes, I will see something and just sketch out a plan with an ice pick, directly onto the block itself,” he states. Finally, multiple ice picks and chisels come out, along with the gas-powered chain saw, and the design begins to take shape. Often, the artists augment the sculpture with lights or added snow to help the design “pop.”

While Cooper no longer sculpts competitively, he loves the challenges customers bring to him. Icon Ice does custom designs and logos. “We create 3D sculptures and some 2D modern sculptures,” he says. “We can freeze logos or other things into the designs – we love to be creatively challenged,” he says. “For instance, I recently did a Candyland theme party and they wanted a gingerbread man with a candy cane. I’m sculpting an Eiffel Tower for an upcoming wedding and I once remade a guy’s tattoo in ice! We are not locked into any set design.” Icon Ice also creates bar, shot and martini luges. 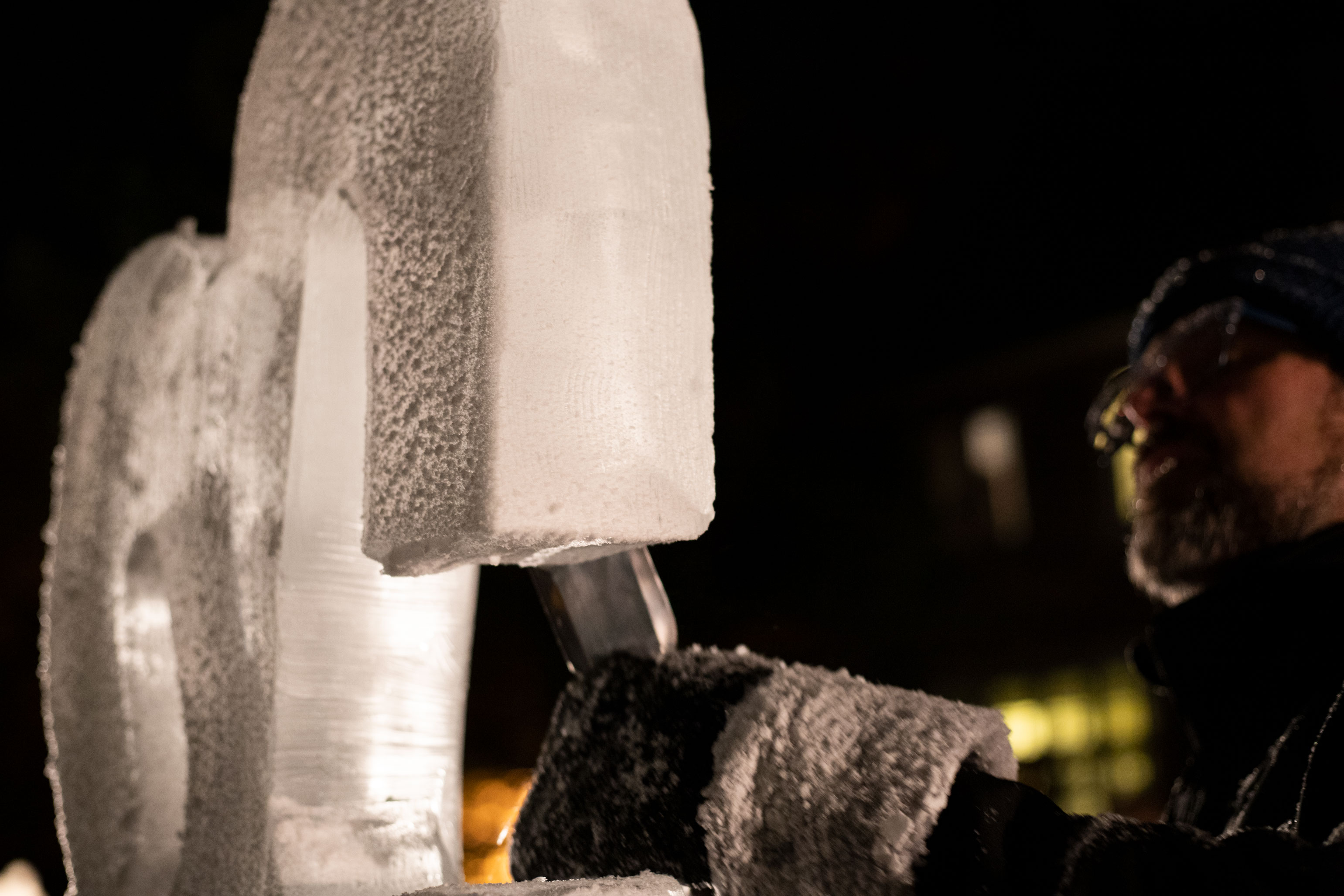 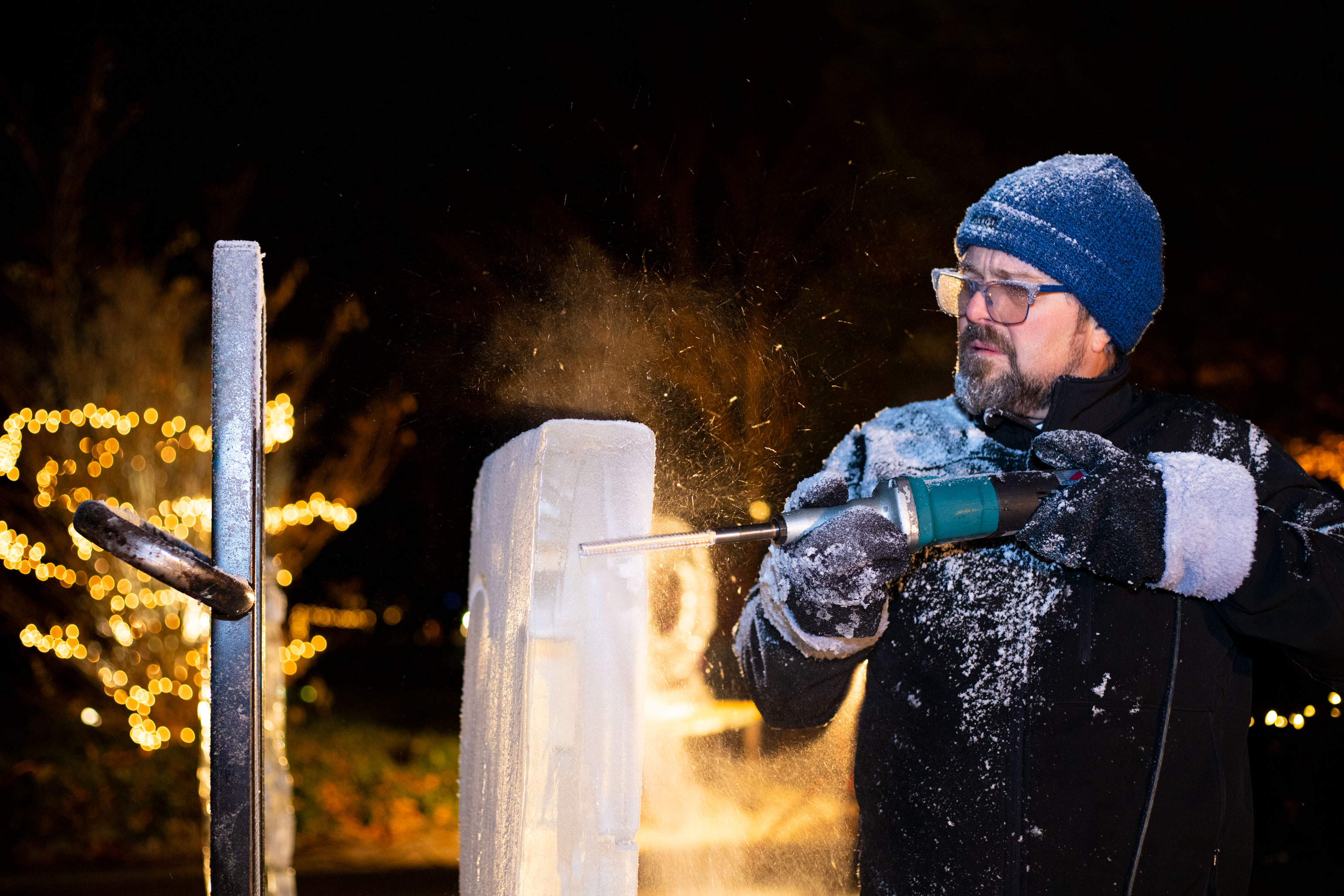 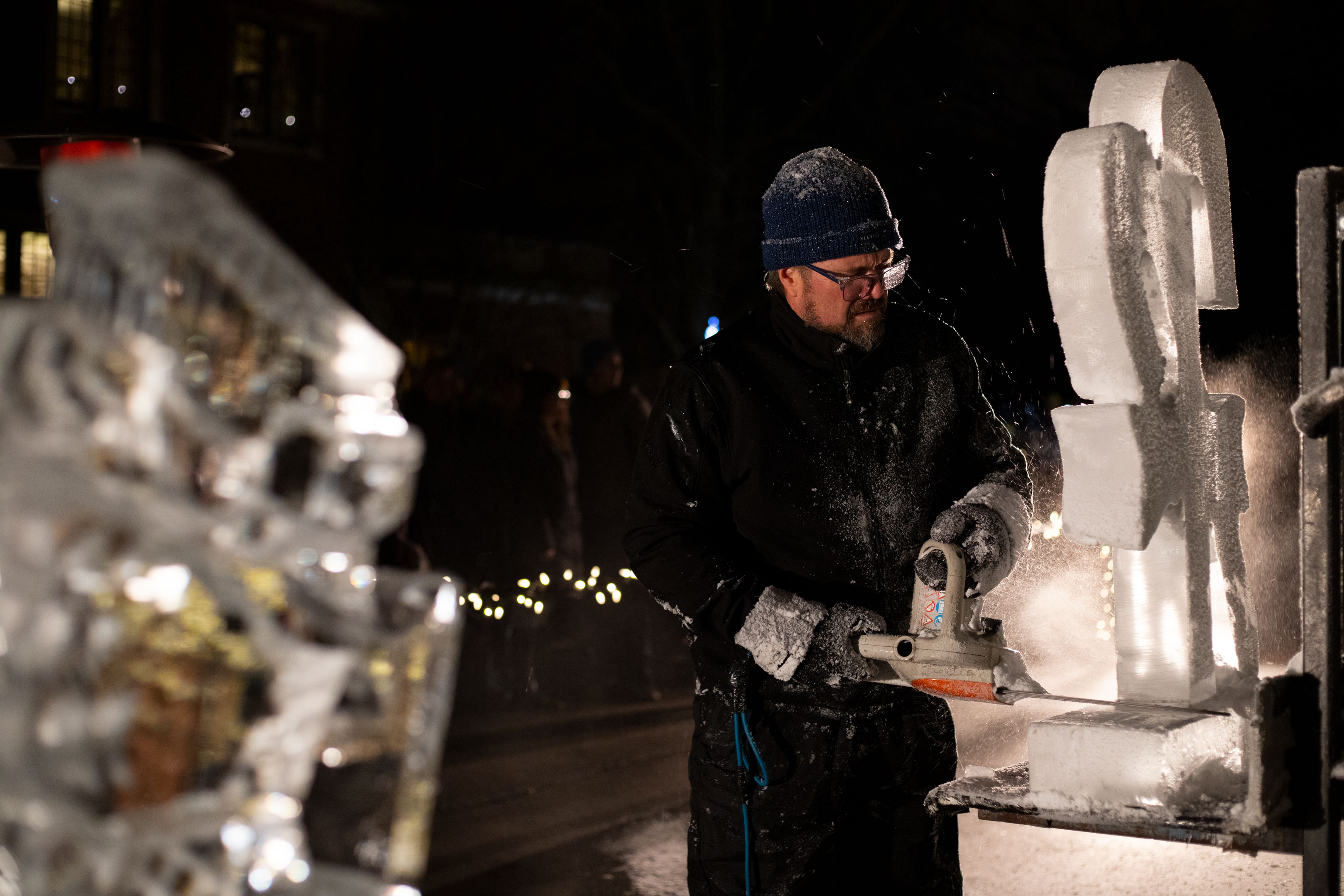 When not carving ice, Cooper is the Mott Community College Program Coordinator/Instructor of Culinary Arts, Baking and Pastry Arts and Food Services Management. Mott is expanding the Culinary Arts program, starting with the new Culinary Arts building in Downtown Flint – but that is not all. Mott is starting an International Culinary program in which Cooper has been instrumental, due to his experience. He is excited for all of it. “I hope to take students abroad for culinary arts and our first trip will be Singapore, a place I visited when I was younger. We are trying to set something up with the University of Florence in Italy. I can’t wait,” he states. “We are hoping that the new Culinary Arts building will help increase our student count and the food service management degree is on an upswing. We are really going after it.” 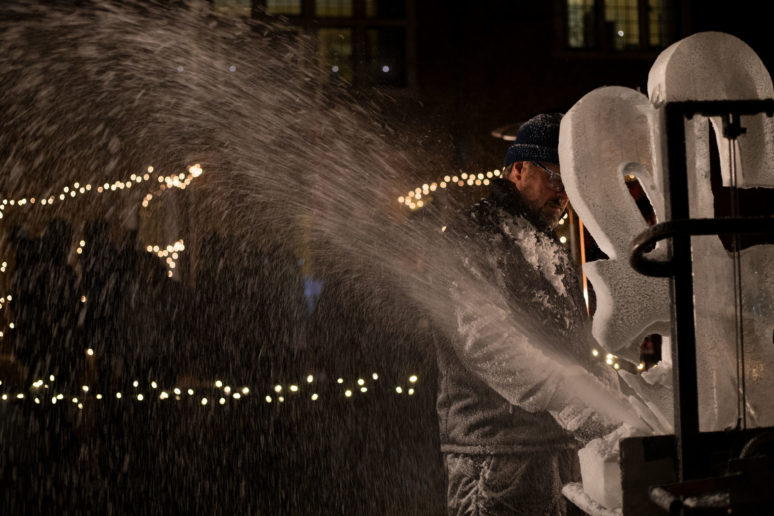 Cooper’s life has come full circle and it never ceases to amaze him. “I grew up near Mott Community College and my first job was at a place called Harvest House Cafeteria at the Genesee Valley Mall. At the time, the cafeteria was part of Woolworth. Now, I am back in the area working at Mott near my childhood home, and the new culinary school will occupy an old Woolworth building. I started at Woolworth and I will retire at Woolworth,” he laughs. Throughout everything Cooper does, be it cooking, teaching, ice sculpting or traveling, he believes in a certain order of things. “Family, God, job and business,” he states. “You always have to keep your house in order.”

If you are interested in having an ice sculpture created, contact Icon Ice online or call 810.714.3733. You can visit Matt Cooper at the new Mott Culinary School in Downtown Flint upon its completion.