“He touched the lives of more than we will ever know. We’ll miss you until
we meet again in heaven.”
Matthew 23:3-46

The future was full of promise for 17-year-old Thomas Smith, an honor student at Flushing High School. He was a star football player, a champion power-lifter and had recently received a scholarship to attend Hope College. But on January 29, 2011, everything changed. Thomas came home from practice on that snowy, wintry evening and told his parents, Mary and Jon Smith, that he wasn’t feeling well and that his heart was racing. His mom thought he was just tired after a long day and told him a shower would probably make him feel better. And those were the last words she ever said to him. Instead of taking a nice, warm shower and getting ready for bed, he keeled over. Thomas passed away that evening after suffering Sudden Cardiac Arrest, leaving a deep hole in the hearts of his parents and his brother, Jacob – and a wound in the hearts of the entire Flushing community. 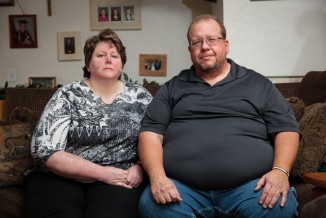 It took four months to determine the cause of Thomas’ death – a heart condition called Hypertrophic Cardiomyopathy, which causes a thickening of the heart muscle, and can be associated with strenuous physical activity, Jon explained. The underlying condition caused Thomas to suffer SCA, a condition in which the heart suddenly and unexpectedly stops beating and blood stops flowing to the brain and other vital organs. “There were no warning signs whatsoever,” says Jon about his son who had undergone years of sports physical exams with no detection of a problem. During a recent football game, Thomas had even taken a football helmet to his spleen and had a CT Scan, but the scan wasn’t high enough to detect his enlarged heart, Jon said.

While members of the community helped the family to grieve their loss with candlelight walks and remembrances, the Smiths were at a loss as to how to go about living their lives without Thomas. Mary felt driven to honor her son’s loss. While researching SCA, she learned that 2,000 active and seemingly healthy youth under the age of 25 will die from an undetected heart ailment each year. “This happens all the time,” says Mary through tears. And it is her belief that if an EKG would have been mandatory for a sports physical, Thomas’ heart ailment would have been detected. But insurance companies won’t pay for an EKG without a doctor’s prescription, and a doctor can’t write the prescription unless it is supported by some sort of symptom. Ninety percent of the youth don’t exhibit any symptoms. Thomas definitely didn’t exhibit symptoms of a heart condition. “He threw a baseball so hard I had to quit playing catch with him,” his father remembers. “Whether Thomas was golfing, running track, playing ball or playing the drums, it didn’t matter. He gave 120 percent at all times. He was a spark plug – a very bright light.”

After about nine months of tossing ideas around, the family decided to find a way to provide free heart screenings and prevent this from happening to other kids and young adults. “God put everything in order,” says Mary. They contacted the Hurley Foundation and discussed their idea. “Hurley was so receptive,” she exclaimed. Mary received direction from a local attorney as to how to set up a nonprofit organization and everything seemed to just fall into place. After partnering with Hurley, the Thomas Smith Memorial Foundation was formed. The foundation raises money and Hurley purchases the medical equipment and provides medical personnel to perform the free heart screenings. 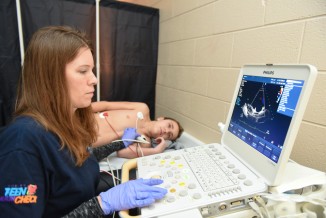 Currently, there are around 100 volunteers who help to provide screenings to area schools twice each year. University of Michigan nursing students volunteer to perform the EKGs under the supervision of registered nurses from Hurley. According to Mary, the screening includes a medical history review, examination by a cardiologist, blood pressure check, an EKG and an echocardiogram, if needed. The foundation has provided 1,800 youth screenings so far and they have detected critical heart ailments in 18 youths, saving 18 lives. And while the screenings have saved lives, the reaction is bittersweet when it is discovered that a child has a medical condition and can’t play sports. “I wish I would have had the opportunity to have my son not play sports,” says Mary.

The Tommy Smith Memorial Foundation has a board of directors comprised of family members and friends. Thomas’ brother, Jacob, is the treasurer. Mary has become a voice in Lansing, hoping to gain support for a law that would make an EKG mandatory for a sports physical exam. She is also the state liaison for Parent Heart Watch, a national organization that raises awareness of SCA. “It gives me a purpose,” says Mary. “If I didn’t do this, I wouldn’t be getting out of bed in the morning. I will do anything I can to keep this from happing to another family.” And her primary goal is to educate parents. “People just don’t think that something like this will happen to them.”

While Beaumont Hospital does screenings for youth in the Detroit area, the Thomas Smith Foundation plans to provide screenings using the mobile cardiac equipment throughout the state in 2016. So far, screenings have been held locally in the Clio, Flushing, Swartz Creek, Carmen Ainsworth and Goodrich school districts. They have also done screenings at the Flint Farmers’ Market. The next heart screening will take place in February at a school that has yet to be determined. “I am asking every parent to get their child screened,” says Mary. “We are not meant to bury our children.” And while Tommy’s life was cut far too short, his bright light continues to shine and his spirit lives on. “Although he isn’t here physically, Tommy is truly saving lives,” says Jon.
The Thomas Smith Memorial Foundation has partnered with the Hurley Foundation to provide free heart screenings at area schools.

100% of all donations go directly to the Teen Heart Screening Program
Checks can be mailed to:
Thomas Smith
Memorial Foundation
P.O. Box 574
Flushing, MI 48433
For information on area fundraisers, Visit TommysHeart.org or call 810.223.7457.