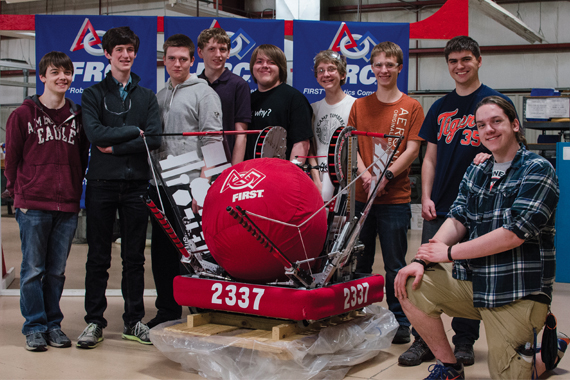 Of the features that define the state of Michigan, the automotive industry towers above all others, and in the past century, automotive companies made our state not only a manufacturing juggernaut, but also a wellspring of aspiring engineers and technological professionals. Although Michigan’s manufacturing identity has been thrown into question in recent years, the legacy is carried on by an up-and-coming generation that still dreams in mechanical blueprints and electrical schematics. One example of this legacy is Grand Blanc High School’s robotics team. They call themselves the EngiNERDS.

At many high schools, robotics is a varsity sport, in which teams build and program robots to perform prescribed tasks against a field of competitors. An organization called FIRST administers the challenges, revealing a game and specifications for the robots that will play that game. Game objectives, the size of motors, maximum and minimum height and weight, as well as functionality are all aspects dictated by FIRST. Adult coaches and mentors aid the students, but the bulk of the work and planning is carried out by the high schoolers themselves. Since 2008, the EngiNERDS have competed in robotics competitions with overwhelming success. This April, the EngiNERDS ended their season at the World Championship in St. Louis, MO.

The EngiNERDS trace their origin to current head Mentor Clinton Bollinger. Bollinger himself got involved in the sport during his senior year on the Bentley High School team in 2001. After graduating and attending Kettering University for an Engineering degree, he returned to the sport as a mentor for a Swartz Creek team. Two Grand Blanc members of this team expressed interest in starting a team at their own school, and Clinton agreed to help them get started. Before the start of the 2008 season in January, the new team worked out of the physics lab, packing all of their materials and equipment into the back of Clinton’s mustang after every meeting for lack of any permanent solution. This period was thankfully brief. Just before their inaugural season commenced, a local Grand Blanc fabrication firm called Premiere Tooling came forward and offered the team full access to their facilities during the hours between their morning and evening shifts. The EngiNERDS have had keys to Premiere ever since. Bollinger said, “We couldn’t ask for a better facility, a better group of people, or better access to machinery.” For their generosity, Premiere has a permanent listing as one of the EngiNERDS’ top supporters.

Positivity is the key to the EngiNERDS’ success. Mentors always seek to empower their students; when reviewing progress from meeting to meeting, mentors look for “pluses and deltas,” pluses representing positive improvements made and deltas representing changes to make going forward. There isn’t the slightest mention of “problems” or negatives, only the potential that exists to improve. In that same spirit of empowerment, departing members of the team engage in a tradition called “Remember When,” in which they talk about hardships the team has overcome and remember some of their hallmark achievements, keeping progress and shared victories fresh in the minds of the younger members while chronicling their shared history.

The result of this culture is a magnetic quality that draws its members, never letting them go. Former students return as mentors and parents of previous students remain as coaches, mentors, or helpers. The Boehnke family is a prime example. Shane Boehnke is a former member who has returned as a mentor after graduating, and Shane’s father, John, remains as a coach. At the center of it all remain Clinton and his wife, Brandi, who are the group’s figurative parents; in fact, the students actually refer to them as “Mom and Dad.” Both of Clinton’s parents, Dave and Linda Bollinger, and both of Brandi’s parents, Jim and Tammy Suder, are active members of the mentoring committee, and the couple’s three-year-old son, Lucas, is an honorary team member who has already been to four championships in his short life.

For the students themselves, the opportunity and experience offered by the EngiNERDS team are without equal. According to the mentors, many kids join the team with no previous engineering or programming experience, but throughout the intensive six weeks leading up to the first competition of the season, they quickly find their stride. Sam Polikarpus, a junior on the team, says that joining the EngiNERDS has expanded his knowledge and confidence. “Robotics allows you to broaden your horizons and get to learn something you never would have known,” he said. “Before I joined, I never used to be the kind of person who would be into mechanics or photography.” Sam is now the section leader of the photography group. Jordan Breneiser, another junior, is a programmer and the leader of the autonomous-mode programming section. When struggling with the coding of the robot’s controls, he and his fellow programmers (called Bro-grammers) do ten pushups and ten sit-ups each time they make an error to motivate themselves to get their coding perfect. “We figured we’d either be the best-looking programmers in our year, or we’d be the best programmers,” he joked.

Seeing the synergy between the team’s work and interactions with each other, from the coaches to the robot itself, it is immediately clear what an amazing impact this sport and the EngiNERDS team have had on everyone involved. The coaches and mentors have nothing but pride and heartfelt respect for their young protégés, making no secret of it in the way they describe the progress each has made since joining. Student members are confident, enthusiastic, and carry themselves with the air of consummate professionals. Clearly the EngiNERDS has taught them more than merely the construction of a robot; it has given them confidence and opened their eyes to their capability. The competitiveness of the sport doesn’t bring out the worst in the kids; rather, it brings out the best: they must be on top of their game and solve problems as the matches unfold. John Boehnke sums it up like this: “In my opinion, no high school class comes close to what FIRST Robotics teaches. You have limited time, limited objective, a budget, and you have all the groups working side-by-side. Everybody goes forward together. Nothing in school covers that in just six weeks.”

A large part of the sport of robotics is a concept called Gracious Professionalism. Although the teams play the game with the intent to win, after the match they exhibit hospitality, congratulating their opponents and even offering assistance if necessary. The league’s highest honor, the Chairman’s Award, is presented to the team that best exemplifies this quality, offering five times the points of an actual win. The EngiNERDS won the Chairman’s Award this year. 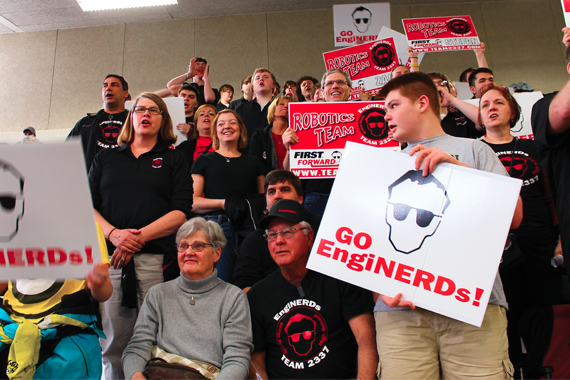 PHOTOS BY MICHAEL GLEASON AND COURTESY OF TEAM 2337

See more photos HERE, or purchase photos from this story by going HERE and selecting the “EngiNERDS” category.