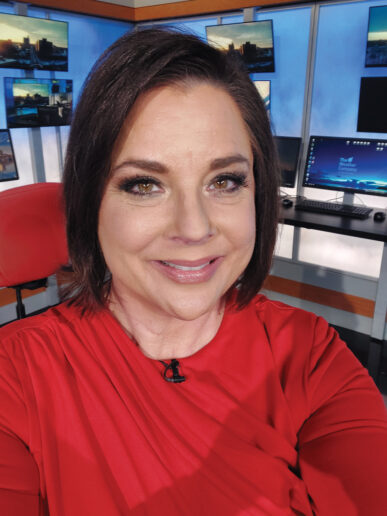 Toldo lives in Linden with her husband Rick and their three dogs: Bear, Gus (Labrador Retrievers) and Lucy, a Golden Retriever. Toldo adopted Ellie, a black cat, from the Humane Society of Genesee County in 2020. “She’s our first cat,” she says. “It was a whole new thing for us but she is the greatest!”

Her path to becoming a meteorologist was not a typical one. She studied communications at the University of Wyoming and ended up with an internship at a radio station. While working as an on-air deejay in Casper, WY a weather job became available and she was asked to apply for it. “I was completely baffled! I went to the interview and got the job,” she remembers. “Back then, things like that happened.”

When she began doing weather in Detroit, Toldo entered a three-year broadcast meteorology correspondence course through Mississippi State University. “I figured since I was reporting the weather, I’d better learn about it,” she admits. Exams were given through the National Weather Service.

“I’m very passionate about trying to make a difference in people’s lives.”

According to weather.gov, it takes a dedicated group of meteorologists to correctly interpret weather data, deliver accurate forecasts and warn us when dangerous weather threatens. National Weatherperson’s Day is celebrated on February 5 and commemorates the birth of John Jeffries, a Boston physician and one of America’s first weather observers. This is a day “to recognize and thank the men and women who collectively provide Americans with the best weather, water and climate forecasts and warning services of any nation.”

Toldo chatted with MCM about her typical day on the job.

As the morning meteorologist at Mid-Michigan NOW, Toldo’s day begins in the wee hours of the morning. “I set my alarm for midnight but I wake up a little earlier. I like to ease into my day,” Toldo states. She does some spiritual readings and plays with the dogs and the cat. “I like to relax and not be all stressed out when my day begins.”

While most of us are sleeping, Toldo leaves her home in Linden and arrives at the station on Pierson Road in Flint.

“At around 2am, I look at my emails and the weather forecasts. Between 3-3:30am (before hair and makeup) she does something that has garnered quite a number of followers – a Facebook Live video from the weather center. Toldo talks in a casual fashion about things going on in her life, music, her pets and also about the weather forecast for that day. “It’s nice and it’s fun,” she admits. “A lot of the same people watch the videos every day; I feel like I know them. I really try to interact with people as much as I can.”

Toldo is also the medical reporter for Mid-Michigan NOW for the daily segment “Keeping You Healthy.” Most mornings, the producer will send her three to four health-related stories that could be of interest to viewers. She goes through the stories, writes up her report and edits it. “I tweak the story to fit our show,” she says. “I take out the fancy words. The secret to good broadcasting is talking to people in a way they will understand. I’ve always had a laid-back style.”

Toldo gets ready for the broadcast, puts on makeup and does her hair.

“We go live at 5am,” Toldo states. During the broadcast, the news anchor is the only other person in the studio. “The cameras are all automated and operated by a computer in the control room. The producer talks to us through a device in our ear.” They are live on the air for four hours – until 9am – two hours on NBC25 and two hours on FOX66. Her workday ends at 9am.

On occasion, Toldo anchors the broadcast of the program “Community Wide” which airs on CW46 at 11:30am on Sundays. She also reports, writes and edits videos for medical stories and does a segment called “Leslie’s Pet Project” twice a month. “I can’t imagine not reporting,” she says. “I love writing and I love storytelling.” 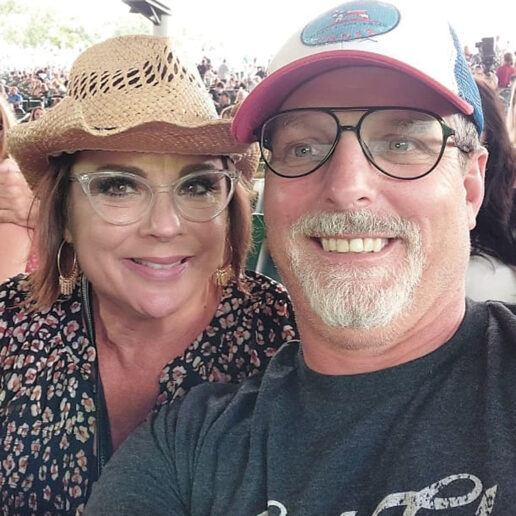 Toldo and her husband, Rick

In her spare time, Toldo spends time with her husband and their pets. In the warmer months, she also enjoys running and kayaking. “I love doing things with my friends and I taught myself to sew and craft during the pandemic.”

Toldo is also well known throughout the community for her volunteerism. For more than seven years, she has taught classes at Genesys Hurley Cancer Institute. “Through the Quality of Life Program, I’ve taught journaling, a grief class, spiritual growth and end-of-life planning,” she shares. “My students are all cancer patients and survivors and occasionally, caregivers. It’s been one of my most rewarding experiences.”

Toldo has been involved with the Humane Society of Genesee County for around 18 years, having served as a board of directors member and emcee for many of their annual fundraising events. And, she writes a popular monthly column titled “My Musings” for My City Magazine.

Add to this list of commitments the time she spends helping people who are in recovery from an addiction. “I’m very passionate about trying to make a difference in people’s lives,” she says. “It’s no joke. There is an opioid crisis and a large number of overdose deaths in our community. These are people who are broken in a significant way.” Toldo also hosts events for the American Heart Association’s “American Heart Month” which is in February. The work of this organization has personal meaning for Toldo, as her mother died from a sudden heart attack four years ago at age 70. “I miss my mom every day,” she says.

One question followers of this popular news personality ask frequently is, “What time do you go to bed?” Toldo says she likes to get at least seven hours of sleep and usually goes to bed at 3pm, but watches TV for a while or reads to relax. She is usually asleep by 4-5pm. “As the medical reporter, I know that sleep is so important for our health. Most people do not get enough.”

The meteorologist says she is inspired by people in general. “I’m so lucky that I get to meet people from so many walks of life.” She is also inspired by her husband. “Rick offers me so much love and encouragement. That is so important to my peace of mind. He keeps me grounded.” She finds the many volunteers who do so many great things for the community to be inspiring, as well.

Toldo very much enjoys her role as The Weather Lady. She has a great deal of respect and admiration for the people she works with at the station. “The producer, directors and tech people are all amazing!” she exclaims. She also has high regard for Chief Meteorologist, Ahmad Bajjey. “I really admire him and his work ethic and I think he will go really far,” she says. “I learn a lot from my younger colleagues.”

Toldo also enjoys working with Morning Anchor, Mike Woolfolk. “Mike has a great sense of humor,” she says. “We laugh a lot in the morning, the whole crew. I’m really lucky!”